Bandai Namco made a huge announcement just ahead of PAX West 2018: It is releasing Bless Unleashed, a console-only, action MMORPG. The team asked me to hop on a class or two and play through the demo that it created just for PAX. The team introduced demo-goers to the Defender, the Berserker, and the Ranger. I played all the way through the demo twice, first with the Berserker then the Ranger. The classes play exactly like you think they will. In fact, the only real surprise about my playthrough of Bless Unleashed was that it was not anything like Bless Online.

After spending about an hour playing the demos and talking at length with the developers, I came to the conclusion that Bless Unleashed has to be played to really understand how it’s different from the other game. In fact, I was told by Lead Producer Jehanzeb Hasan, “The biggest difference between Bless Unleashed and Bless Online is that they are actually completely different. Even though they share some resources and some graphic designers, the teams are producing some very different gameplay styles. So technically speaking, there are not even any common areas, actually.” 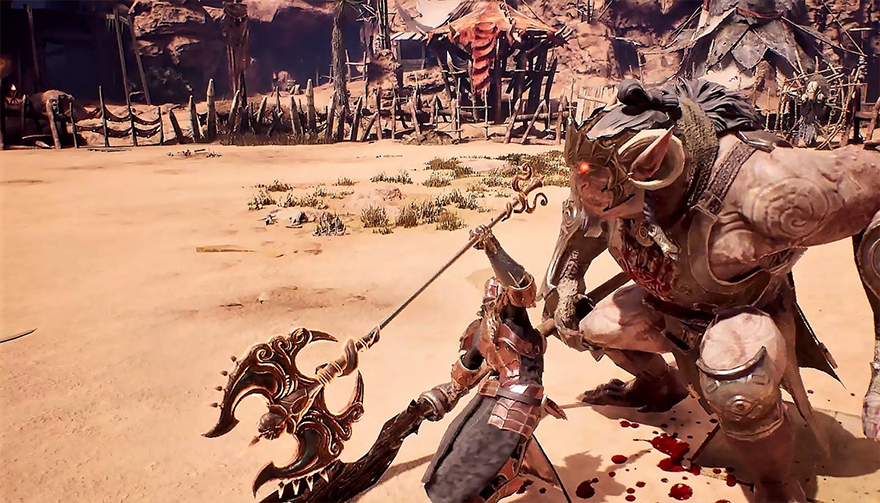 A demo is a demo

I do not own an Xbox of any kind, but I am not console-opposed. My family has two Nintendo Switches, a PlayStation 3, PlayStation 4, and a handful of older consoles. But I have to admit, I have not been good at playing with a controller since playing Star Wars: Podracing on the Nintendo 64. I figured that I could fake it with a melee class at first, so that’s why I stepped behind the controls of the Berserker.

The demo was very simple scenario built to demonstrate each of the classes. I was told later that the demos were made specifically for PAX. An NPC with clearly temporary voiceover and animations asks that you take care of a group of orcs that are giving her trouble on the other side of a ward she created. During the fight itself, there are five groups of orcs increasing in number as you walk along the path. The Orcs don’t have any strong mechanics; your goal is to just hit them before they hit you. The leader of the group will rush you, but it’s really the cyclopes that you have to worry about.

This giant monster had its own cutscene and arena. It also had the most complex mechanics of any NPC up this point. It would leap to you, do a targeted AOE, strike the ground to send a shockwave on the ground in a straight line out in front of it, and lastly, it would shoot a laser beam out of its eye because why not? 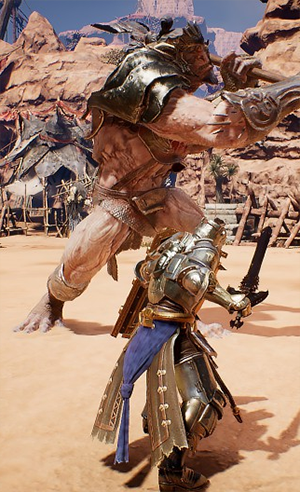 I wouldn’t say there were any real surprises with the class itself. It plays kind of how you would expect it to play. It’s a heavy AOE, high DPS class. The hits are hard but slow, and it requires more movement to avoid being hit in its weak armor. Its combos were a lot of fun for me given that this is the kind of class that I enjoy playing the most in pretty much any game.

The first thing that anyone should notice between Bless Online and Bless Unleashed is that there is zero tab targeting in Bless Unleashed. This, in theory, should make things more difficult, but I believe that the hitboxes might have been undertuned for the demo because it seemed like I couldn’t miss. I was thankful for this because I am terrible with the controller, as I mentioned. I was also thankful for the hints at combos that would pop onto the screen after the first hit, suggesting which way I should go next.

The biggest criticism I had for the class as I played it was that it didn’t appear that the class had any versatility. I kind of felt like the combos where hit, hit hard, and hit harder. Maybe I shouldn’t expect more than that out of pure DPS class.

I despise ranged classes in third-person action games, and I don’t like them very much in traditional MMORPGs either. I guess I just like to dive head-first into the action. But for the sake of trying out a range of classes (pun intended), I decided to give Ranger a shot, too. (The pun was intended there, too.)

The combos for the Ranger were actually a lot more fun to work with than the Berserker. It appeared that there was more utility because you could combo between long and short range, single and multiple targets, or even do knockbacks. For someone who typically does not like ranged classes, I actually had some fun with this one.

Of course, the class wasn’t perfect, and it seemed that this class ran into the inverse of the hitbox problem that I talked about with the Berserker. There were many times during the cyclopes fight that I was hit by whatever the boss was throwing at me even though I seemed to be out of AOE range.

I mentioned this issue to the developers, and they said that they are still working on that, citing PvP as the biggest reason for this oddity. The player characters range from the very tall to the ones that only come up to the waist of the average player.

I did enjoy myself in during the demo for Bless Unleashed, and I certainly see why they want to separate themselves from the other team. It really is a different game. In fact, the developers even mentioned that the lore comes from a different perspective. They liked to say that it was a different but parallel world. The premises of the games are even different. Bless Online focuses on the political systems of the world and Unleashed tells a more celestial story, according to the Unleashed developers.

If there were a $60 or even $30 price tag attached to this game, I’m not sure that I would recommend this game. However, when this game releases sometime next year, it will be free-to-play and feature all of your expected MMORPG amenities: trade, social hubs, dungeons, and of course, PvP. And it will cost you nothing to jump in. It’s probably worth your time to check it out. Of course, you’ll have to buy an Xbox One first!

Stopped reading after “The biggest difference between Bless Unleashed and Bless Online is that they are actually completely different.” File that under “No Shit, Sherlock”

“The biggest difference between Bless Unleashed and Bless Online is that they are actually completely different. Even though they share some resources and some graphic designers, the teams are producing some very different gameplay styles. So technically speaking, there are not even any common areas, actually.”

Haha I mean not that it isn’t true, but that is pretty much the only acceptable answer from a marketing point of view given how Bless Online worked(/is working?) out, right?

They should just release this on PC too and gift everyone that backed Bless a copy, because the current game / business model is never going to make it.

Probably should of just brought this game to the PC market instead of what they did release. Pour more into this games development and really flesh it out into a console/PC ready MMORPG.

The combat sounds like its a lot more compelling than current Bless as well.

Wrong, it shares the same cash grab company that failed with Bless Online in both Eastern and Western markets. Fool me once, can’t get fooled again. Hard Pass.

agreed, I was surprised that people even fell for this crap in the first place but i don’t blame them since they were desperate for a good mmorpg. korean companies must be disregarded completely, they spend ridiculous amount of investment money and the result is similar to a chinese cash grab ripoff. i don’t trust anything that isn’t made in america now, i’ve seen enough french devs screw over the playerbase.

In fact, I was told by Bandai Namco’s development team “The biggest difference between Bless Unleashed and Bless Online is that they are actually completely different. Even though they share some resources and some graphic designers, the teams are producing some very different gameplay styles. So technically speaking, there are not even any common areas, actually.”

Then they should name it something else. It’s not like Bless has any good will whatsoever attached to its name, and with its name attached to it there is no way I am going to give the title a chance. I don’t care if it is free-to-play, the way the NA release of Bless was handled and executed is a disgrace to the MMORPG genre as a whole. Bandai should be ashamed for getting in bed with Neowiz after everything that happened.

Bless Unleashed has to be played to really understand how it’s different from the other game.

Not gonna happen. If this is as PvP oriented as Bless PC I’m not about to become content for other people just to see how it is isn’t the same utter garbage that Bless is.

I totally get that sentiment. Why NOT name it something else? And the impression that I got from the Unleashed devs was because so much of it relied on the existing lore, setting, and assets of Bless that to name it something else would be disingenuous. It would be like making a game in the Star Trek universe and calling it “Explorer” when it really should be named “Star Trek: Explorer.” It’s just unfortunate that our first experience in Western culture with Bless was Bless Online.

As I said in the article, though: What I played was just a demo, so there are a lot of places for things to fall apart when constructing the MMO side. But it’s intrigued me enough to watch to see what happens.

Neverwinter brings back the Harvester of Nightmares to consoles and offers...

Starbase previews moon base building and moon mining features in a...

The Stream Team: A return to raiding in Final Fantasy XIV...