Whoot! Secret World Legends delivered a nice surprise gift for Krampusnacht 2018: new content! As in, new new, not returning-from-TSW new. Not just “stuff” either, but missions. Missions — not one, but two! And one’s a new investigation mission at that! Can you tell I am a little excited?

END_OF_DOCUMENT_TOKEN_TO_BE_REPLACED
I will admit that when the tweeted announcement noted a new mission, I was curious whether that meant new-new or new-to-SWL. I suspected the latter. Not that I would have minded in the slightest for The Christmas Conspiracy to return; I love that mission immensely and really hope it does make its way into this iteration of the game. But I was very pleasantly surprised to find upon logging in that the mission(s) in question was something never seen before in TSW. And I am telling you, that bolstered my holiday spirit up onto the housetops and I was sending cheer Funcom’s way. This is exactly what we need to keep Secret World Legends growing — new content. Even little bits like this more frequently would be great. And having it come during a holiday event, well, that thought really does count! In fact, I am so happy about it I might even overlook the lack of new holiday lore for 2018.

Now just because I am gushing about the new stuff doesn’t mean previous seasonal fun is gone. There are still plenty of Krampuses to hunt, Hels to squelch, and snowballs to pelt in friends’ faces. You can get a good guide on all those activities in the 2017 Krampusnacht guide. This year’s guide will focus on the new stuff, including sales and bonus events, without spilling more beans than you want to see. That way, you won’t miss out on anything before Krampusnacht ends on January 2nd, 2019.

The first new mission is the bounty mission, Winter Holiday Champions. You grab this by visiting that terminal right on the center platform of the World Tree. This directs you to find a number of champions (it turns out to be four , as noted on quest, out of nine possible, which you learn from the achievement tab) that have appeared for the winter holidays. The mission also tells you that there may be puzzle-solving or exploration needed to find these champions. Just knowing that should automatically tell you one important thing regarding finding them. Finding champions you’ve never killed before. Let’s just say that fulfilling the bounty is much easier in a zone you’ve already cleared of regular champions; the easy search method won’t work as well if you haven’t. Just imagine where you think a holiday champion might hide and go check it out! Of course, you can just look for something out of place in the world, too. 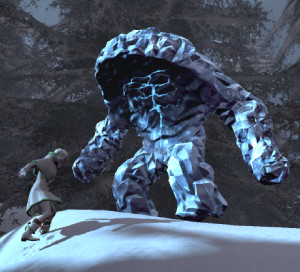 The good news is that this quest should theoretically be completeable completed by anyone who can access Egypt. If a character has made it through the main story and into Scorched Desert, it should be able to do enough to finish the bounty. (I do not have a toon in that range to confirm, but will let you know when I learn of confirmation!) Additionally, the bosses spawn at your level so you won’t be facing something way above your abilities just because of the zone it is in. Conversely, this also means that the Kingsmouth boss is not automatically a pushover!

See? Not spoilery at all! Oh, you want some better hints? Well, then you have to click these spoiler blocks below.

Want a more blatant hint? Click here.
The champions are designated on map by the big orange skull, so just charge through a zone checking that, or use it to confirm (or deny) your suspicions on their whereabouts.

Want even more? OK, you asked for it!

Forget hints, just tell me where they are! Click at your own risk!
There’s one for each of the zones up through Tokyo, but there appear to be multiple possible spawn points for Savage Coast, Besieged Farmlands, and Carpathian Fangs.

Now that you know where to find them, do you want to know how to dispatch them? Well that needs its own set of hints.

Once you’ve collected your four bounties, you get your reward. Note: You can also kill the bosses each daily without the bounty mission for drops. But what you really want from completing the first bounty mission is a dropped phone that starts the holiday investigation mission, Fog and Mirrors.

As excited as I am about an investigation mission, I am not going to tell you anything about it. Nope. These things are way to spoiler-laden. How does this mission compare to past Krampusnacht holiday fun? Well, that I can’t quite say yet. But if you really want to check out the mission, spoilers and all, keep an eye on the OPTV calendar and watch it run live next week! Then, I might share all my thoughts on it. For now, I am just goign to say I am glad it is in the game. And I have appreciated the little puzzles involved in the bounties as well. 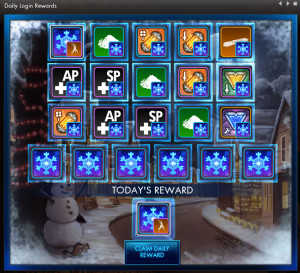 If you have been doing any holidays in Secret World Legends, you are familiar with the raid boss and its matching item to open by now. Krampusnacht is no different. In fact, it is really basically no different. For 21 days you can claim a daily snowflake, which you can stack up or open daily. The first 15 days also grant you a gift besides the snowflake box. If you Krampusnachted last year, you likely have the pet and mount already (they will turn into 2K anima shards upon use), and the imbuers, SP, and AP are nothing new. The only new item item added in is Stabilyzing Tracyons, a special particle used in Deep Agartha, that has been added to three days. If you aren’t doing that content yet, hopefully you have a free bag space.

As for the snowflakes themselves, we also saw no change. As the Samhain raid gift boxes were the same in 2018 as 2017, there wasn’t any reason to think that Krampunacht boxes would be any different. And after opening a few personally and only getting 2,000 anima shards (your reward if you already own the gifted item), I ‘m fairly sure this is the case. You can check last year’s guide for the full list. If there turns out to be any changes then we will let you know!

While there appears to be no new lore to discover (either found yet or noted in the legends window), there are four new achievements to earn in the holiday category, Fog and Mirrors 2018. Festively Fatal only needs you to find and kill a single Winter Champion. That goes fast enough and can be accomplished by anyone, especially since the bosses all scale to your level. Winter Hunter goes further, however, having you kill each of the nine Winter Champions once each; players will need to have access to Tokyo to get this one.

Peering through the Fog is granted for completing the new investigation mission Fog and Mirrors (meaning you’ve killed your first four Winter Champions and completed your first bounty). I am Green, You are Red must be achieved during the investigation mission itself. To do this, players must reach  the maximum possible distance through an active manticore laser grid.

As part of the main holiday event, mini events and sales are happening throughout the month. Bonus AP and SP is active from now until December 21st. On the 21st it will switch over to an empowerment bonus event lasting until the 26th. Then, from the 26th through January 2nd, 2019, a no limits bonus event will run. Sale-wise, throughout the entire event (so ending January 2nd) all imbuers, catalysts, and agent booster are 25% off. All events will switch over on their assigned days at approximately 9:00 a.m. EST.