Sure, obsess about your space pixels and starships, but the spacelegs content in Star Citizen is still most compelling to me, and that’s exactly what’s on offer in this week’s episode of Around the Verse. NPC Twitch Pacheco is the star of the show: She’s a badass soldier and agent with lots of Bladerunner stylings and mo-cap acting, and she’s a key criminal mission-giver with super great hair. No really; Cloud Imperium says it’s making heavy use of the game’s hair tech to give her those killer braids.

There’s also a big chunk of video on planetary development and procedural cave system design, a segment on alpha 3.5’s rifles and other weapons, and acknowledgment that the Banu Defender will be delayed to alpha 3.6. 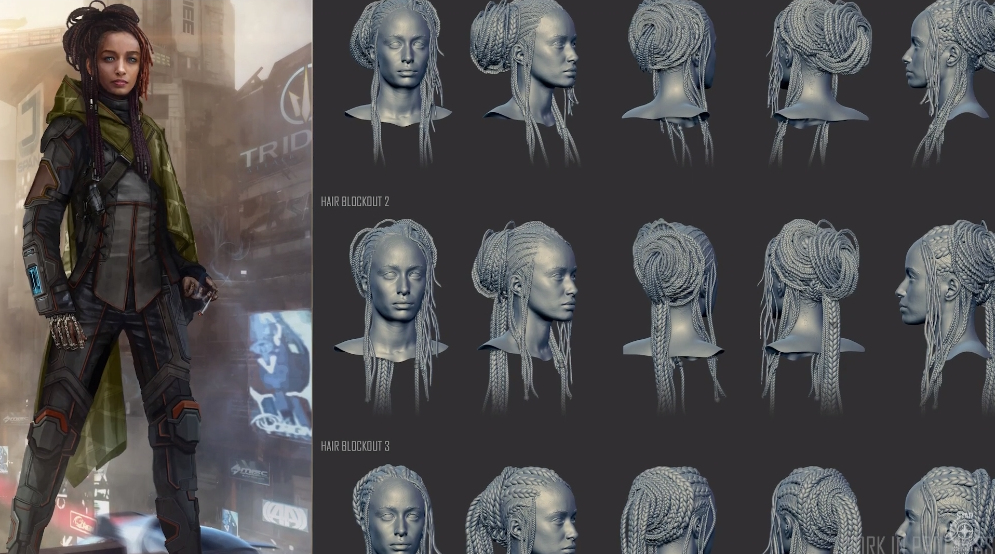 so what’s the ETA for female avatars now? I ask this about once a year. Not even being sarcastic.

this coming patch 3.5 in a few weeks.

On another note, all I ever see of my character in game is their backside anyway.

anyways leaks of the new flight model in evocati are looking good. there really hasn’t been too many leaks. apparently they had a short PU ship ai test and they really improved the shit out of it with even larger variety of AI driven ships to fight.

i’ve got people telling me that i won’t be able to brawl (which they mistakenly reduce simply to circle strafing) like i do in 3.4 but i will be the judge of that.

i’ve been trying to not play as much as 3.5 is pretty close to being on ptu but honeslty i jumped in with a buddy last night and spent a few hours tooling about and had a good time. but really just want to get my hands on 3.5 and see what’s what with that.

and in general tired of armchair generals fighter jocks and developers telling me some strange story of how the game is supposed to be based on years old marketting videos and youtuber/twitch personalities trying desperately to stay relevant as they no longer have 30-90 minute videos of people reading teleprompters to miscommunicate to their viewing audiences.

have a nice weekend all. the important thing is that you’re trying to out do joe blobers, and that’s what really counts, what’s inside.

Hair tech! I am so excited I can hardly contain myself. What a joke.

You know you are ACTIVELY promoting a scam by posting this article, right?
I think that this website had the moral and ethical duty to protect its readers from getting embezzled in part of schemes that are blatant and obvious scams. Shame on you for promoting this kind of fraudulent scheme!

Please point me to the evidence that it is a scam. Seriously. If you can provide me with any, I’ll agree with you 100% and will actively spread that evidence.

so would you like me to show you in just the last few years the sales of concept ships that have added features that have added years of development to the project? How far back do you want to go, there are ships from 5 years ago that aren’t even in out of concept with features that were promised that are no where near coded yet. The amount of gameplay promised is staggering. It was a running joke that on Ask the Devs, the answer was always a variation of the same “Yes, we will be adding your dream feature in the future, we just have no idea when that will be.” CIG literally does not say no when one of their community fanbois spitball some ridiculous gameplay feature, such as spelunking. Literally, i read the half dozen guys who said “Hey, wouldn’t caves be cool to explore.”

So the scam is milking the project for as much money as they can get for as long as they can keep it going.. and the proof is all these needless features they come up with to continue the project without an end date.

I’m an Alpha Tester and 10’s of Thousands are having a blast with the current status of the game. It’s worth the experience for the minimal entry of $45. I’ve been a PC Gamer since 1990 and some of my most memorable experiences have been Alpha Testing Star Citizen.

Is there a pop counter on the game? I’m sure it’s relatively popular but 10s of thousands?

There is a ‘new account’ counter at the RSI website. The latest count as of today is – 2,255,415. CIG has gained about 255,000 new accounts in the last 4 t o5 months. It grows by the thousands every week. Granted there are same user ‘duplicate’ accounts but the majority are individual accounts. When Alpha 3.5 becomes ‘live’ for all Backers in a month or so… tens of thousands will be back to try out the new flight model. The ‘counter’ is here -https://robertsspaceindustries.com/

Where exactly does it say anywhere in this article to BUY or pay anything? It just says here what was talked about this week….thats is not an endorsement. it’s a completely neutral story, unlike your hysterically polarized post.

I’m all for shittalking Star Citizen, but let’s not get that far yet.

Just because you’re insane, doesn’t mean the rest of the world should be too.

To be fair, i do think any backers that backed this gargantuan thing with more than the bare minimum to play is insane too.

I gave 5k and then took back 4k.. so how insane or sane does that make me?
Ive been asking myself, but talking to oneself is kind of insane in and of itself.
So asking you is perfect.. how insane am I?

It’d be more refreshing to hear that they are actually making what exists PLAYABLE and not spending dev time working on the 80th hairstyle.

It looks and feels good, but the core gameplay is severely lacking. Maybe this was a response to criticism over selling $200 ships to donors for five years instead of developing the gameplay.

Every now and again, I log in to see what’s new. Tried the sub-surface bunker AI missions.
Spoiler alert:You aggro the AI, go back to the elevator and wait until they are relaxed again and then just walk around headshotting them -it’s comical and good money for completing those.

The third one I tried was REALLY comical. I went to the lift platform and though it was “there”, it really wasn’t. I fell to my death THROUGH the floor.
Weak, dawg.
Real weak.

I was mad again at wasting an hour of my time to try that mission and respawning back at Olisar. I had used the bed in my Titan… had recently been to a closer station, but nope -had to respawn at Olisar.
Rather than spend another half hour QT-ing to Hurston, I logged off for another few months.

I took a break from Alpha Testing but I may jump back in with Super Hornet when the new flight model arrives with Alpha 3.5…. However with that said… I’m curious if CIG will release Squadron 42 – Episode 1 (single player game) within 6 months of their scheduled ‘retail’ release date of 4th Qtr 2020.

Hey! there’s only 6 hairstyles right now…). Seriously, this only came up as this NPC character/Mission giver, and perhaps her hairstyle will be in the game in the next patch due in 2 weeks, along w the female models which people have been waiting ALL of two years for.so its relevant.

Well, people have also been waiting for playable content that doesn’t bug out and end your mission before you even start off on it, too.
Also, floors that are solid, and textures that aren’t missing that call to you, “Pssst! Come over here! Yes, YOU. Come… step into this corner. I know it doesn’t look like there is texture there, but just step in and see.”

Then, you fall endlessly through the map.
hahaha

Then maybe you should spend the time and WATCH the episode because they talk about the Flight Model and what they’re changing and WHY — to make things more playable.

hummmm… I wonder if I can cap the cave entrance and pump it full of air so I can explore it with free flowing hair bouncing as I walk / jog. Or will I have to buy the transparent helm just so I can see my hair.

Just suggest it on the spectrum and I’m sure at some point, the ability to cap cave tunnels so you can explore without a suit. And the flowing hair thing is already a promised feature they added a few years of development for.