The past several weeks have been something of a strain, I’ll be the first to admit. The pressures of the job are to be expected, but having to contend with the apparent assassination of a Dark Council member was… not a scenario I had fully planned for. Still, I understood that I had to be at my best, and all things considered, I believe I had taken the best course of action when I think back on the events leading up to today. I have no regrets.

That, of course, is the broad-strokes assessment. Looking inward, I’m certain there were perhaps one or two things I could have done better. Chief among those is handling the confrontation with Darth Jadus. In my defense, being in the presence of a Sith Lord does not lead one to deep levels of rational thought, especially when their very physical being incites feelings of terror and illness. I am told I should not try to want it all — want to save Imperial lives, destroy the Eradicators, and ensure Darth Jadus would answer for his treason. Considering my service to the Empire, however, wanting it all is second nature. It is reassuring, though, that admonishment feels distant or even non-existent. Again, no regrets. 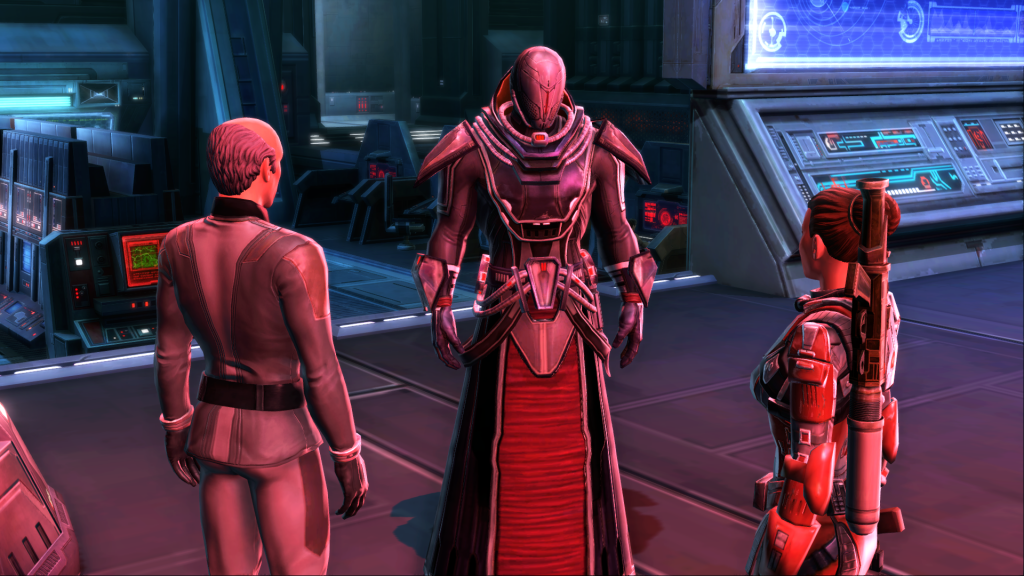 The moment-to-moment events that unfurled during this mission still lend me to a sense of dread or morbid curiosity. In the short-term, it’s mission complete. In the long-term, however, is still the potential for Sith-based retribution. I have no doubt that the Council members loyal to the Empire will intercede should Jadus make another coup attempt, but I also have the weight of knowing defense of my own life means less than nothing to them. And then there is the matter of Darth Zhorrid. I will say candidly that she is unhinged and a threat, and the news of what her father did will very likely not sit well with her.

I will also candidly admit that the actions of both Zhorrid and Jadus have not entreated me to the Sith any more than they had previously. At every opportunity, they interfered and meddled, forcing us to maneuver like dolls in a playhouse. The thought still infuriates me today. But I am a professional and servant of the Empire first, and so will continue to serve; if I must be a plaything for what amounts to an extremely temperamental and petulant child, then so be it. The cause of the Empire is what I believe in, not the whims of the Sith.

Despite this sense of dread? I feel good. Genuinely. 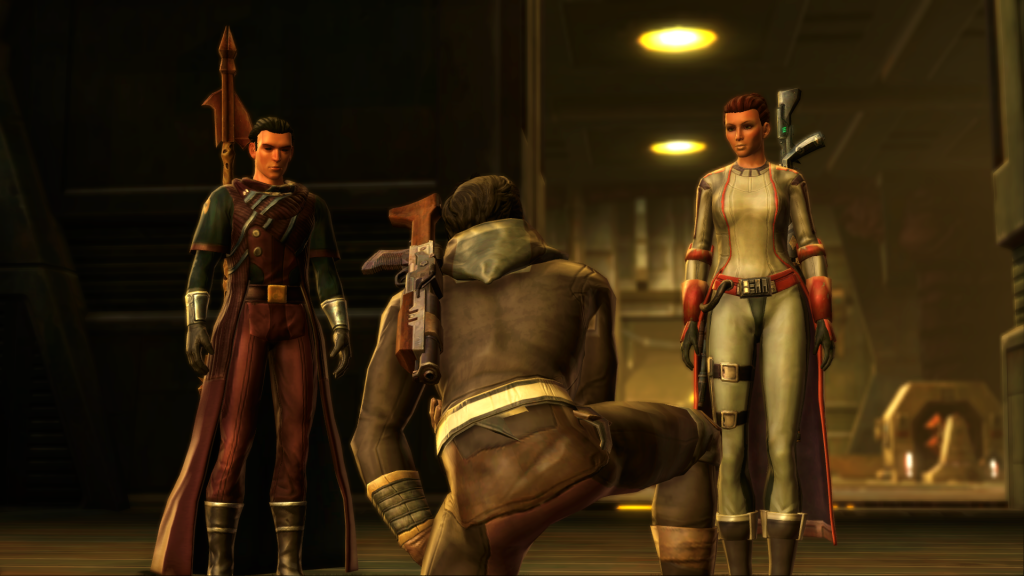 Of course, I cannot take all of the credit. I was helped along by my support staff and those who traveled alongside me during this little romp. Kaliyo is… not an ideal companion by any measure. She takes far too many opportunities to remind everyone within earshot of just how ambivalent and hardened she is, which in my experience are flags which mark that the opposite is true. She was effective in combat, however, drawing the attention of enemies away while I found cover and lined up my shots. Given time, I might be willing to find common cause with her, but I found myself delighting in any open opportunity to needle her and disrupt her machinations.

Case in point: During a moment of downtime while awaiting new intel, she had confided in me a desire to rescue someone who she considered to be an old friend. I assumed having the matter cleared from her conscious would improve her operational use, and so I agreed. As events unfolded and we rescued this person of interest, however, it was unveiled to me that she was recovering this individual to achieve a vendetta; the person of interest was apparently someone who saw Kaliyo in servitude some years before. Angered at being manipulated, I let this person go and smiled when Kaliyo got angry. I also reminded her that she is a deputy of the Empire and should not steer one of its officers into a game of vengeance.

As for the recently arrived Vector Hyllus, I am still uncertain. His combat prowess is considerable, but his motivations and how they are inextricably tied to the will of the Killik hive mind are cause for concern. I’ll have my blaster pistol nearby and ready to put him down the moment an opportunity arises. 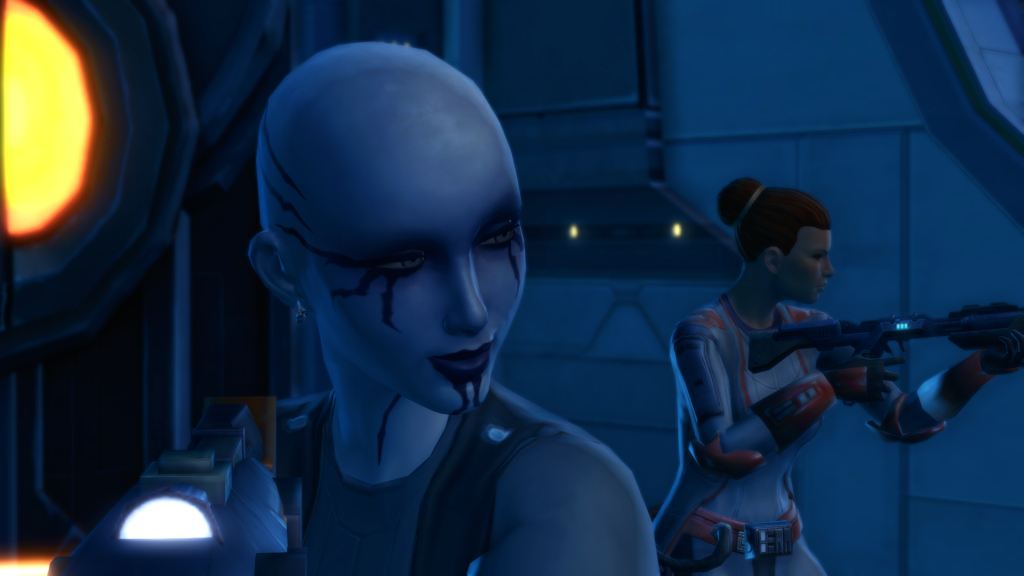 Still, duty continues to call. Once this psych eval is over, I plan to head to the nearest cantina, find what amounts to the quietest possible table, and drink myself in to a sort of gentle fuzziness. I have much to look forward to from here. A new Keeper, likely a new Watcher, and a new mission to aid the Empire. I have not gone into deep cover before, and so I find myself both concerned and eager for the unique challenges it will provide.

The mission on the face seems straightforward: Infiltrate the Republic SIS and disrupt a Jedi spymaster. Of course, it’s never that simple. Never. …I apologize, did that sound like weariness? It’s not. Just… a mantra that I should expect the unexpected. Coupled with a bit of that tiredness. I’ll admit, I am tired. Not unwilling, not unable, just tired.

I think I need that drink. If you’ll excuse me, droid. End recording. 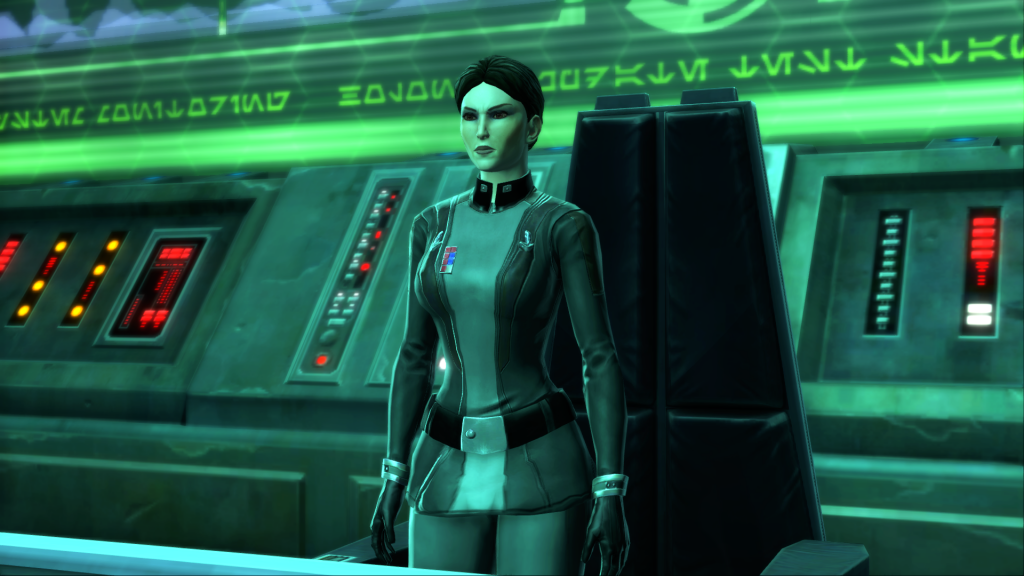 As you can perhaps surmise from my in-character babbling (thanks for reading through that, by the way, I hope it was interesting), I rather got wrapped up in my Star Wars: The Old Republic adventure and the exploits of my character. However, it’s time to put on a new face so to speak. It’s time for TERA, and it’s time for the first poll!

Since we’re starting fresh, that means starting with a new class. I’ve had a bit of experience with all of them before, but none of them have ever really set their hooks in with the exception of the Lancer. Still, I’m looking forward to using CMA as a reason to dig in and focus on one class and one character, at least for a little while. The race will not be up for a vote, as I’ll be making that choice myself, but consider this your advance guarantee that this CMA will be an Elin-free zone. That also means there will be no Reapers or Ninjas involved, regrettably. Of course two of the cooler classes are locked to the friggin’ Elin.

Anyway, enough grousing. Let’s tie down the class, shall we?

What class should I choose for my TERA adventure? 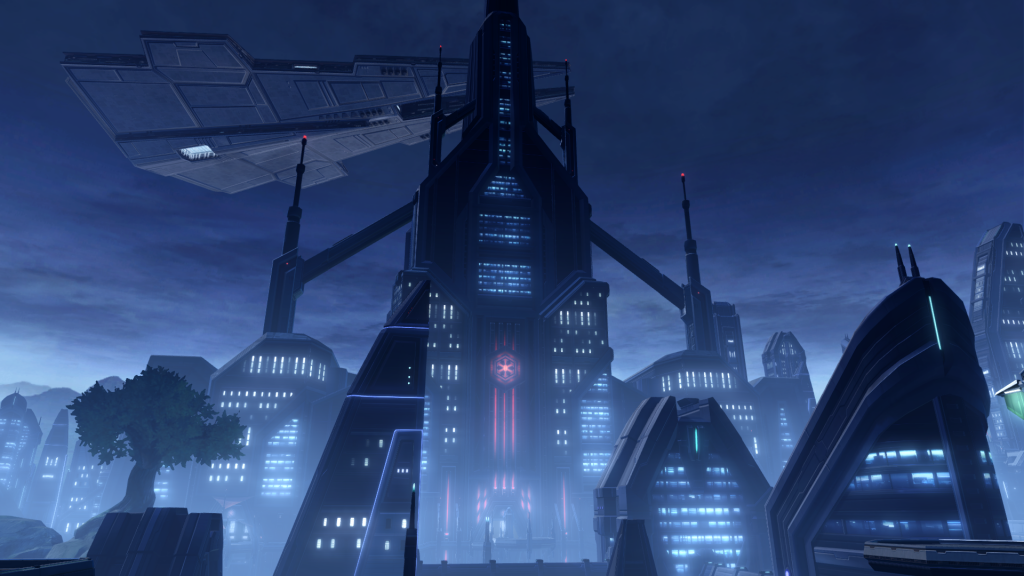 Deadline for votes is 1:00 p.m. EDT this coming Friday, June 7th. Until then, I’m going to hope I can get the installer for TERA to work. Wish me luck.

Really appreciated and enjoyed the in character write up Chris. :-)

I would like to put in a write-in vote and say you should continue with the Imperial Agent story.

I enjoyed reading that, thank you :-)

Nicely done on the writing.

TERA Battle Arena walks you through how this MOBA works

Unpredictable aliens are invading Ship of Heroes next weekend