This past week Crowfall patched in update 5.100 (that’s right – we’ve gone from 5.9 to 5.100, as one does), which wiped existing characters and added in a handful of new features. As we wrote last week, there is a new race/class combo, updates for new players, and an Embargo System, among other tweaks.

When I hear the word “embargo.” I recall dozing off in Mrs. Henderson’s history class and just hoping the bell would ring and provide me some sweet relief from this agonizing, torturous lecture. But I’m sure in Crowfall the Embargo System is going to be super exciting, right?

The Embargo System is another name for banking

Well, maybe not exactly exciting, but certainly worth consideration. The Embargo System is basically the name ArtCraft has decided will describe the system of allowing items to move between your account, individual campaigns, and the like. It is not a huge change for players; you still have your out-of-campaign storage and your in-campaign storage, but it is a simplification of the overall banking and stuff-storage system.

The new system has just two types of banks: an Account bank and various campaign banks. Account banks are similar to the game’s old spirit banks. Your account bank holds items that can move between vessels and to individual campaigns to be used therein, but the embargo system limits the amount of items that can go in and out. 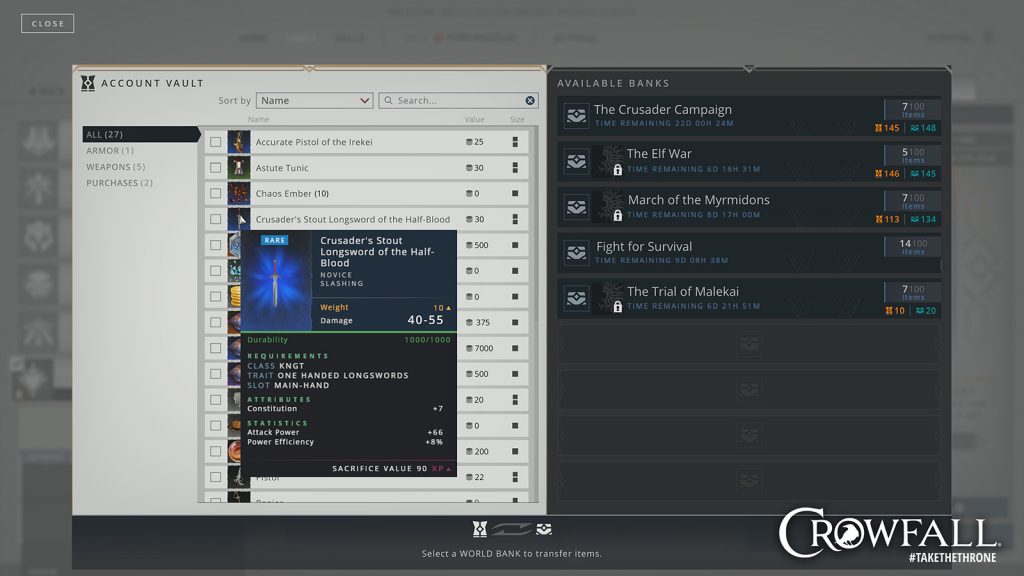 Previously, players had a spirit bank, which held items that were not directly tied to a specific campaign. These items could be put in and pulled out (with some restrictions) from any character in any campaign at any time. You could just grab an item and drop it into your character’s inventory. Alternatively, if you have a nice weapon in the campaign and it was ending shortly, you could put that weapon in the spirit bank and have it available for use in other campaigns. If you didn’t move this weapon to your spirit bank, it was lost to the digital gods.

In addition to that, you also had a world bank (storage accessible from world bank chests within a campaign) and local banks. The world banks are basically the campaign banks, except now it is the only way to get your account items into a campaign since you can’t just drop items from the spirit bank into your character’s bag anymore.

Local banks, on the other hand, were storage specific to an individual location. So, for example, if you put something in a fort’s local bank that your faction controlled and then that fort flipped control, you lost those items. Now, local banks have been deprecated. This probably makes a lot of sense; the chance of a fort flipping control and causing you to lose your store loot was just too high. I suspect very few players made much use of them outside of holding materials while crafting.

The Fae Knight makes its introduction

The Fae Knight plays the same as the existing Knights, with a very minor difference: Having those wings sure is nice when it comes to hopping off walls to chase down your enemies, so that will be convenient. Also, the increased critical hits from racial traits are useful, but I’m just not sure it outperforms the existing races for this class.

I wanted to have more to say about the Fae Knight than it turns out I do. It’s a Fae. It’s a Knight. I suppose the reason we didn’t have it this whole time is that the art and assets needed to be designed for the race. This sort of brings up another point I hadn’t thought so much about: If each of these races is going to require entirely unique assets for class armor, that could be quite the task for the artists. I hope that doesn’t affect armor designs in the long run. I need there to be vast amounts of gear to pick and choose from aesthetically. I mean, I know we are focused on the pwning, but I want to look fabulous while I do it!

New players get an update to God’s Reach

The update to God’s Reach was also a very nice one for new players and those who are leveling (which is everyone in the test, of course). I’ve given my thoughts on being a new player in Crowfall before. Let’s say I haven’t been a huge fan of it yet, so I am glad ArtCraft is continuing to improve upon it.

Now, you can view the map of the area and see where nearby NPC camps are, and how strong they are. One other note is that the God’s Reach campaign no longer requires faction selection prior to entering. This in turn means there’s no PvP in it. Wait… how did I not realize there’s no PvP in God’s Reach? What game am I even playing anymore?

Honestly, I kind of like knowing that there are PvE only options for playing. Continuing this trajectory could be great for the long-term health of the game. Get players in here who don’t like to PvP but do like the world building. It could actually be a place for PvE players to live and play alongside their PvP comrades. There’s something potentially powerful here.

However, I can’t be alone in wanting to get into the game and start PvPing like yesterday. The leveling here does feel quicker than before, likely due to the improvements made to mobs. Players can pick out mobs and have a chance of getting some kills without having to be in a full group, though that does help speed it up further. I would still prefer some straight-up arena style areas that we can fight each other and level up in, though.

Campaign restrictions to vessels over level 20

The last item of note for me was an update to campaigns. Specifically, vessels (characters) can’t enter a campaign until they are over level 20. I can understand the thought here, as there are are some advantages and disadvantages to this; however, it seems like more of an unnecessary burden than a boon.

On the positive side, it’ll help point the low-level players to God’s Reach. This is good. It can be really difficult for new players to tell what the difference is between a campaign and God’s Reach. Also, entering the campaign solo and low-level is just a brutal experience. You don’t have a guild to guide you, so you end up just wandering the wasteland.

On the flipside, it means new players can’t PvP until they reach that level even if they want to. Considering I’m in Crowfall for the PvP, I don’t think this ideal. Also, levels don’t boost your power nearly as much as good gear does. So even if you are level 20, lowbie gear ensures that you may as well still be level 1. ArtCraft has improved it so that mobs can drop decent gear and you can buy some from vendors. I won’t know until the campaign officially starts up next week whether that will be enough to stay alive in PvP or not.

In addition, if you want to have multiple vessels in the campaign or you want to level up a high quality vessel, then you would have to grind its level up before you can get into battle with your guildies. This could be very frustrating – even for veterans.

Overall, I remain hesitantly optimistic about Crowfall. The game is still not fleshed out enough in its pre-alpha to be my primary game (but I can think of a few ways it could be). But ArtCraft is regularly pushing out solid updates and improving the game every patch, which is more than a lot of released games are doing.

So, friends passing me notes in class and distracting me completely, do you think this update continues to move us in the right direction? Or did ArtCraft waste your time and mine by revamping the banking system when it wasn’t broken in the first place? Do you agree with level restrictions on entering the campaign, or is that a concept that should be saved for after release?