“Oh man! A new Skyrim!?” proclaimed an eager con-goer as I waited outside The First & Bell in Seattle. As I entered, the venue seemed like was just the perfect place for an Elder Scrolls Online announcement. Unlike a certain other MMO studio that rented out a theater to not announce Cantha (I’m bitter!), the ESO team held a short and to the point announcement on its upcoming Dragonhold DLC in a cozy and welcoming venue that sold skooma and a quiet place to learn about the exciting new things for Tamriel.

ZeniMax came out swinging. Along with the addition of the Southern Elsweyr region and its main city of Senchal in the Dragonhold DLC, which is due out later this year, extra emphasis was put on one of the most asked-for features for the game: a massive performance boost! I am not an ESO player, but as a Black Desert gamer, I know how critical a tightly built, well-coded MMO is for both immersion and competitive play. The room filled with sighs of joy and relief, knowing that the team will finally now dedicate time to improving the backend systems of the game, lugging up holes in code, maximizing memory use, and completely recoding the LFG system.

During the event, I had the opportunity to sit down with Rich Lambert, ZeniMax’s Creative Director, to discuss the upcoming changes. That’s Lambert on the left, with me on the right! 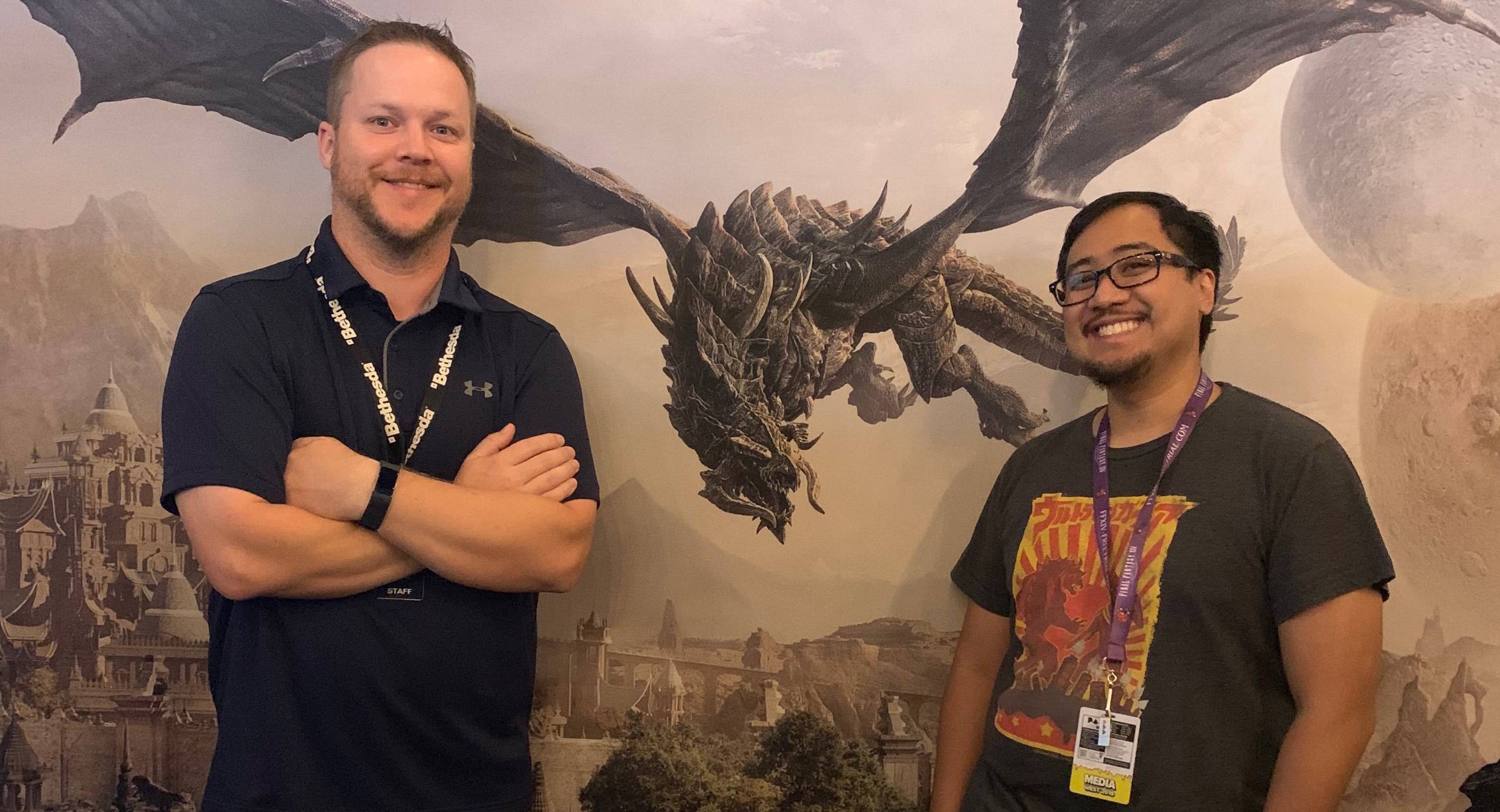 My first question was simple. “Why now? Why not sooner?” Why wait until now to tackle performance, knowing how important it’s become to players?

“Elswyer was really kind of that… I guess for lack of a better term the straw that broke the camel’s back,” Lambert told me. “We were getting close, and we had plans to do some of the things, but Elsweyr really was that huge influx of players, everybody’s in there, taxing the servers, taxing the client, and we were like, ‘OK.’ It kinda caught us by surprise. The game was five years at this point. It was time for us to double down and really get right in order to grow in the future – to continue to add something in the future.”

With the team focused on min-maxing the game for a larger playerbase and for more flexibility in adding more for the future, it was only natural that conversation led to a topic our Elder Scrolls columnist Ben wanted to hear about: PvP, specifically whether the team is planning to tackle PvP performance and content too. Lambert pointed out that ZeniMax has added such features already, but he wanted to emphasize just how important it was to spend resources on updating the backend systems first.

“Our goal #1 right now is to improve that performance,” he said. “So we don’t want to make it worse by continually adding new things. [We want] to get performance to a good state and then we’ll start looking at changing the mix.”

Naturally, I asked him when ZeniMax is going to find that “good state.” That discussion led to the infamous Cyrodiil issues. (Cyrodiil is the capital province that serves as home to the game’s RvR mode.)

“We’ll know it when we see it, but the goal is anybody can get in, and play it, and not crash, not get knocked down to the dashboard. Have as lag free [an] experience as possible. There are some points in Cyrodiil right now where if you’re in a crazy defense or trying to take down that last keep there’s 300 people in the area and it’s painful so we want to improve on that and get that to good playable state.” […] I see the pain. It’s just not an easy flip of a switch and everything’s better.”

If you ask me, this sounds like a good use of resources. The way a game performs for me is a huge dealbreaker; it’s one of those things I can’t ignore as a player, so I’m glad to see the team taking the steps to improving this feature.

Speaking of things I can’t ignore, one of the intriguing things about this dedication to performance is the total back-end overhaul of the LFG system that’s on the way. Prior to preparing for the event, I didn’t quite understand all the issues with the LFG system in ESO specifically, so here’s how Rich laid it out for me.

“The biggest problem with LFG right now is when it’s under load, it basically gets out of sync. People will go in the queue, the queue will throw up an LFG invite which has everybody ready up, and then sometimes everybody’s confirmed and it puts everybody back in LFG and asks them to re-ready up again. And they’ll be stuck in that loop for a little while before everybody gets in. And that’s just a load issue. That is the biggest thing that we are absolutely killing with this re-write is that when under load situations, you can get in, ready up, and go in right away.” […] This all back-end. This is all server related stuff. From the player’s point of view, it will look exactly the way it does now, except it will work reliably.”

I could only imagine just how painful that is – one of the main reasons I’m exclusively a tank in some MMOs is because of queue times. My ESO playing colleagues agree this is a much-needed update.

Before I ended the interview, I just absolutely had to field a question on MOP’s Justin’s behalf: “Are you done with dragons after this?” The answer was actually quite surprising.

“This particular outbreak [of dragons] is localized to Elsweyr,” Lambert explained. “So if you’re super familiar with the lore, in our timeline, the second era, dragons aren’t really around. And so, we worked hard with Bethesda game studios to make sure that what we are doing with this would actually fit in the lore of the timeline. And they’re totally on board with it, and its a localized event.”

As I understand it, since it’s a localized event in a time when dragons really weren’t around, we can postulate that the next chapter might have something other than dragons! So if you’re tired of dragons, we can all take a sigh of relief knowing Tamriel will be dragon-free for at least a little while.

After the interview, I’m legitimately interested in joining my colleagues already playing ESO and giving the game a go for myself. Simply knowing that there’s a competent team now laser-focused on the health of the game gives me confidence that the MMO’s in good hands.

Massively Overpowered was on the ground in Seattle for PAX West 2019, bringing you expert MMO coverage on everything (and everyone!) on display at the latest Penny Arcade Expo!
Advertisement

Massively Overthinking: Is old-school MMO dungeon-camping ever coming back?