I’m only level 3 and already Dungeons and Dragons Online has elected to whup my ass.

By the barest margin, the polls said to pick up quests from the Gatekeepers in the Grove, so it was time for a couple of quests from what I assume are a bunch of druids. The ones in that quest list guide seemed to indicate that they were level 3, and my character was level 3, so reason would stand that things would be even keel, right? 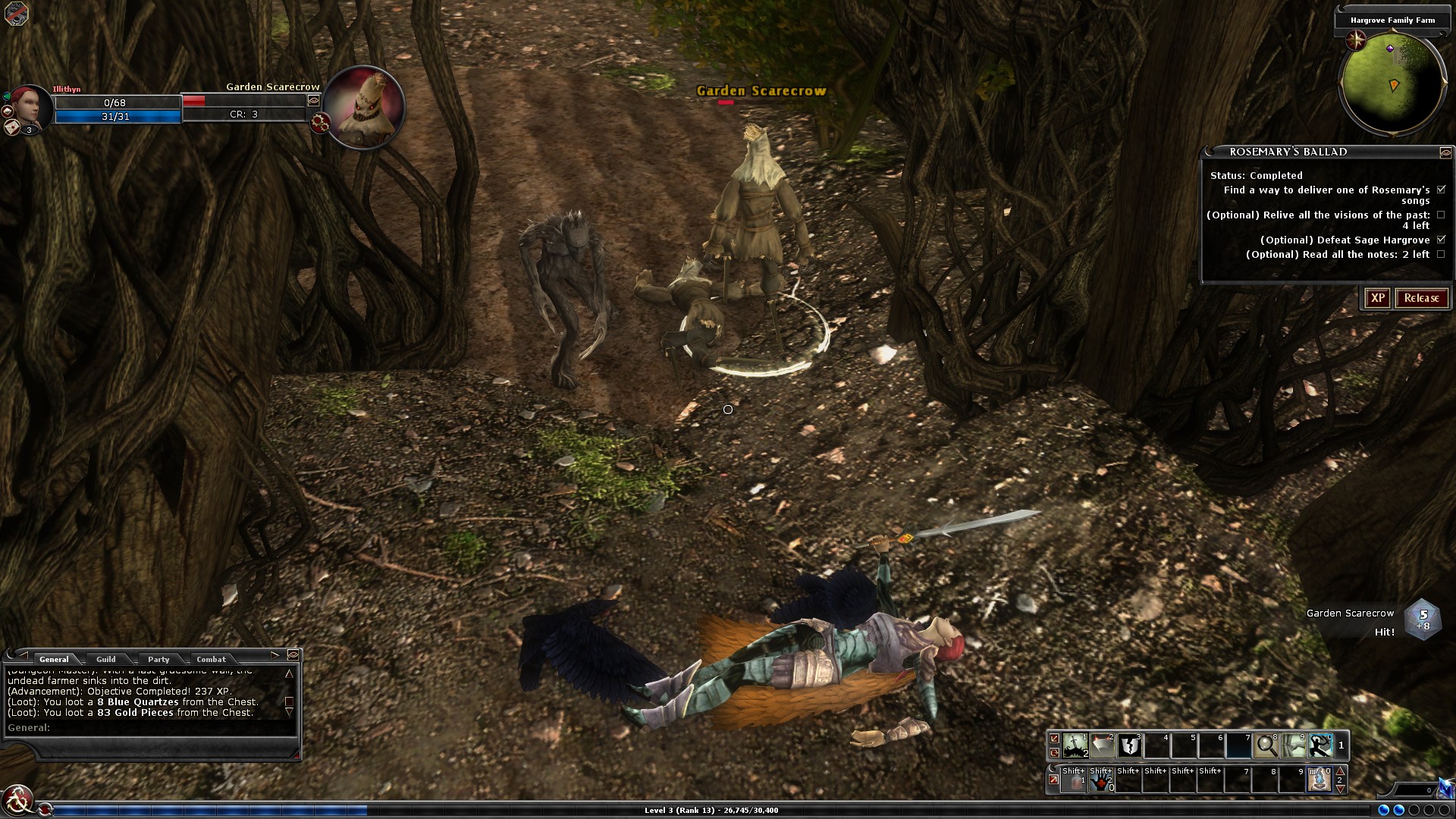 I first started my adventure in the Grove by attempting to figure out where to go by myself, talking to NPCs in order to pick up quests. Routine stuff, I thought. But then, the first NPC I spoke to hit me with a bolt of lightning that transported me to this place that effectively looked like every old school heavy metal cover art ever created.

I mean, it was neat to visit, but it was also clear I was out of my depth.

After talking to another NPC who lightninged me to another area that kept telling me I was too low of a level, I finally gave up, opened up the guidance UI, and found the NPCs in the Grove I was meant to speak to. And while this whole thing was a bit annoying, it also sort of reaffirmed how DDO does things a bit differently, for better or for worse. There’s not a whole lot of breadcrumb trail to follow here, but you’ve got to use the tools you’re given. 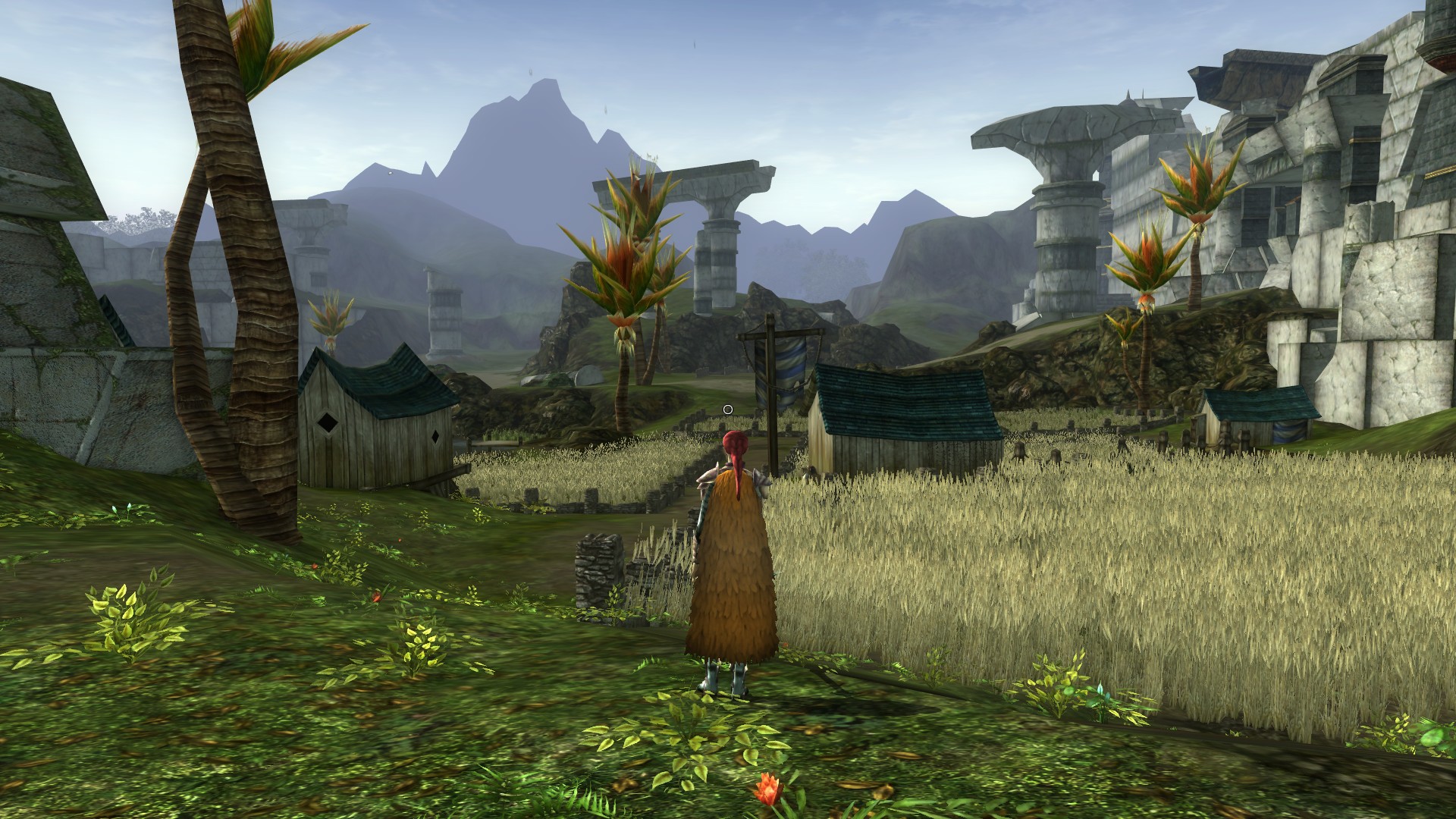 With a couple of quests picked up, it was time to adventure on. Both of them led me to another open adventure area of verdant hills and pretty farmlands, as well as wolves, orcs, and bugbears that were starting to smack me pretty good. It wasn’t a particularly tough test, but these encounters most certainly made me sit up and pay more attention, especially since I had spent a few hours previously farming for the Borderlands achievements, where most of the fights were faceroll.

The first was involving the Hawthorne Farm, a rather depressing little tale that was full of some sad themes and scarecrows and ravens that were rocking my world. I was nearly dying to ravens. I literally died to scarecrows. This mission was no joke, but at least I was able to work my way through with the power of my two-handed sword and a whole bunch of potion chugging.

The second mission had me working through a druid dungeon in search of some mystical bounty, which was full of even more dangerous foes. And a lot of them, too – many fights had me facing off against six enemies at a time. It was here that I ended up falling the most, particularly since I was running in to slime enemies that did damage to my weapons. At one time, I even lost the axe I was swinging, forcing me to flee from foes while I hurriedly knocked back potions like I was at a frat party and scrambled through my unsorted inventory to find my two-handed sword.

Seriously, though, where is the sort button? 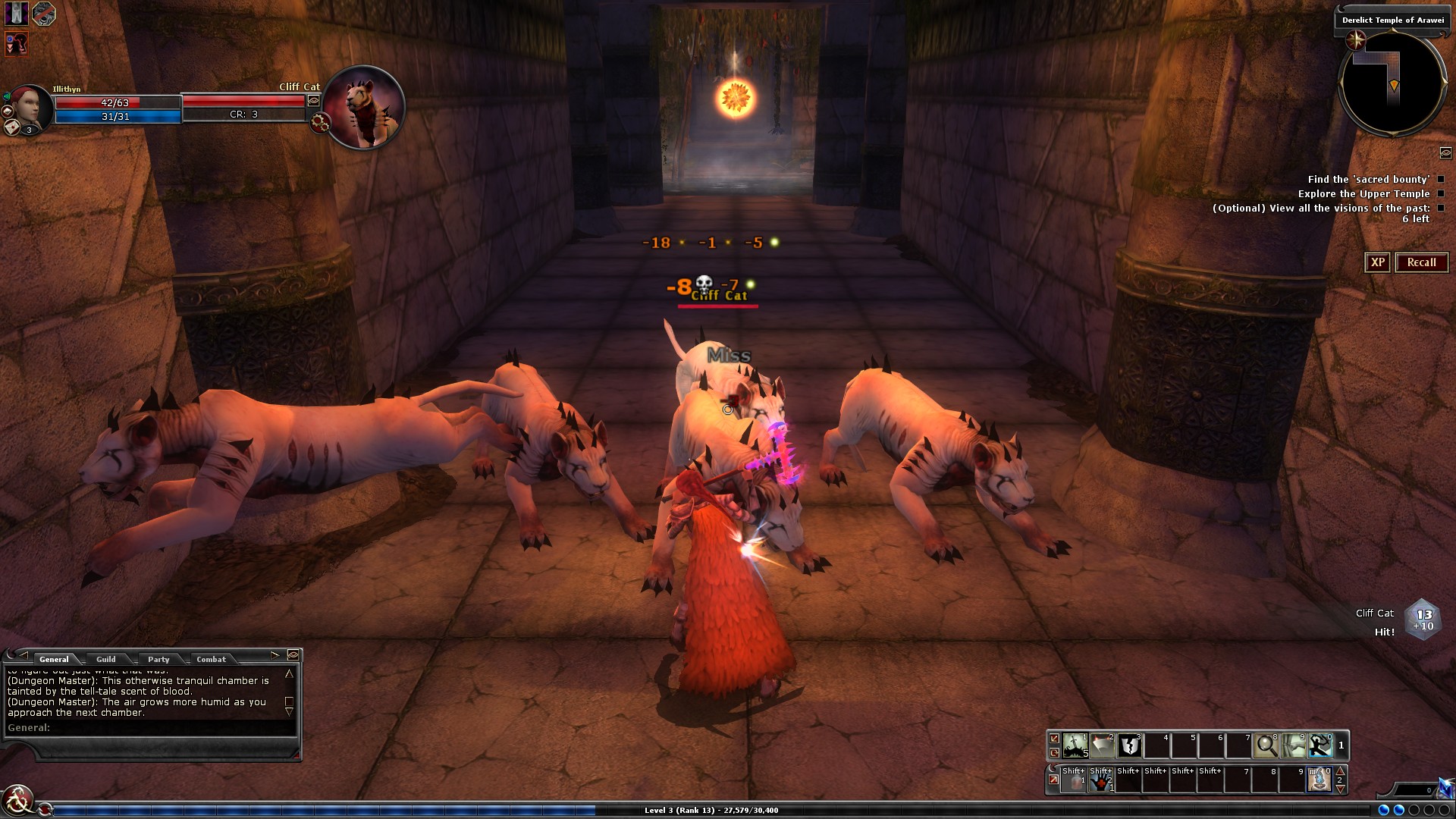 Ultimately I was victorious, but it was only through a lot of falling over and copious abuse of the swift cooldown of potion use, which didn’t make me feel particularly heroic.

It also made me wonder something about whether being level 3 was somehow a hindrance to my ability to take on level 3 quests, so as a test I took up a level 2 quest, The Butcher’s Walk, which effectively was a standard dungeon crawl where the objective was to kill everything on sight.

This one was just a bit easier but also not quite as tough as the level 3 quests I took up, so it makes me think that perhaps I need to grind up some more or take up those level 2 quests before I move on. Or maybe my gear is garbage and I need to find or buy some new stuff. Or maybe I need to figure out how summonable companions work – I tried to use them when I was doing the Grove quests but the cleric scroll I bought never actually had anyone show up. But at least now I have a sweet poisonous falchion that looks like a lightsaber when I swing it. 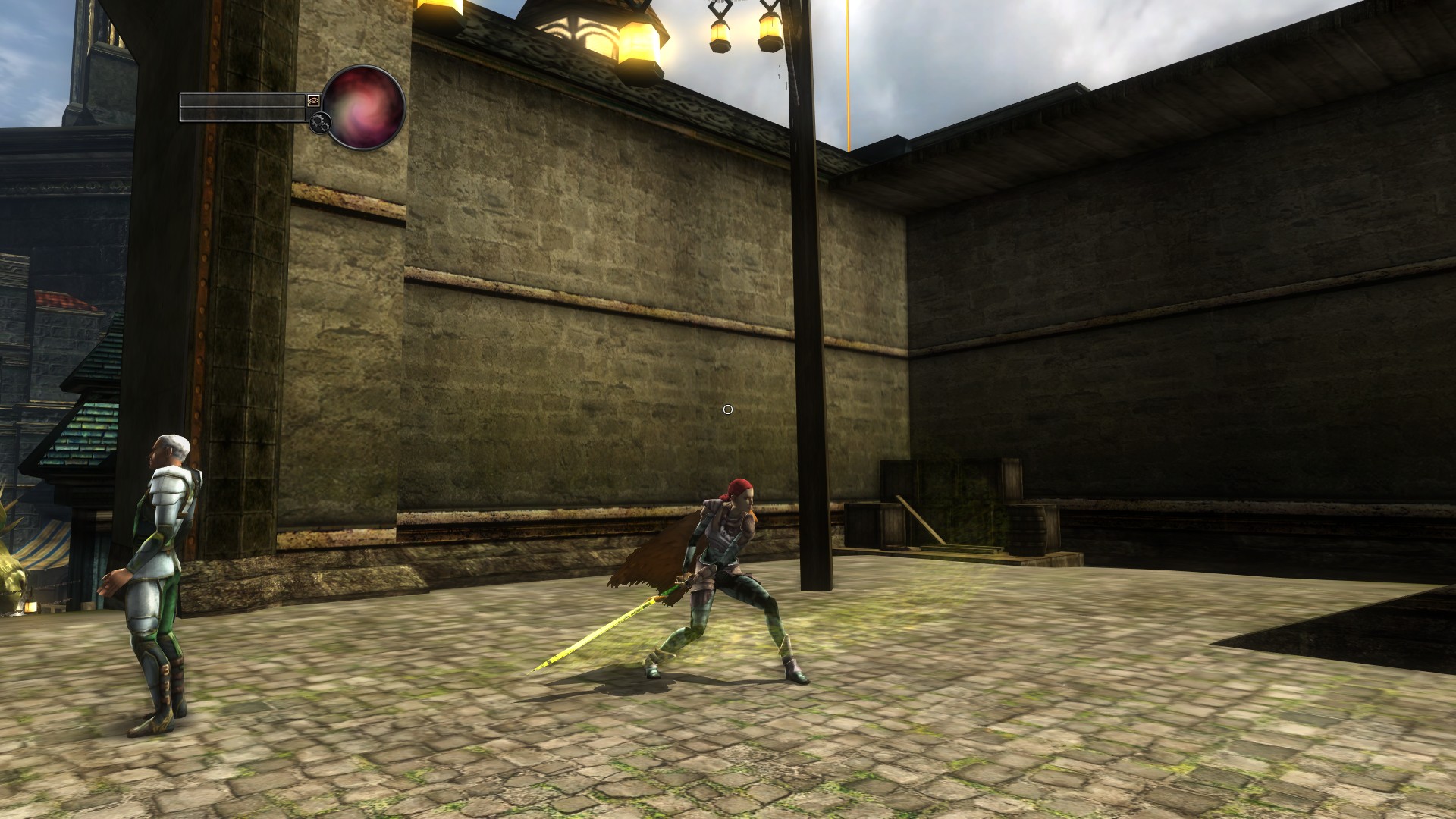 With all of these bumps in the road, I’m still enjoying myself a whole lot and I want to keep playing some more, but alas, the time for this game on this column is drawing to a close. Or is it? Let’s sort it out the way we do here: with polls!

What do you say, friends? Should I have one more week of DDO things, or should we get on to our next game?

Should I continue with DDO or begin readying for another game?

The second poll seems to assume the answer of the first, but I’m just getting ahead of the curve for when this CMA’s game focus does eventually shift. With that in mind, it’s time to consider what the next month’s game will be, and next month I’m actually wanting to check out the “smaller” MMOs. Yep, it’s another themed poll idea. Here are the choices.

What game should we go to next? Choose My Adventure! 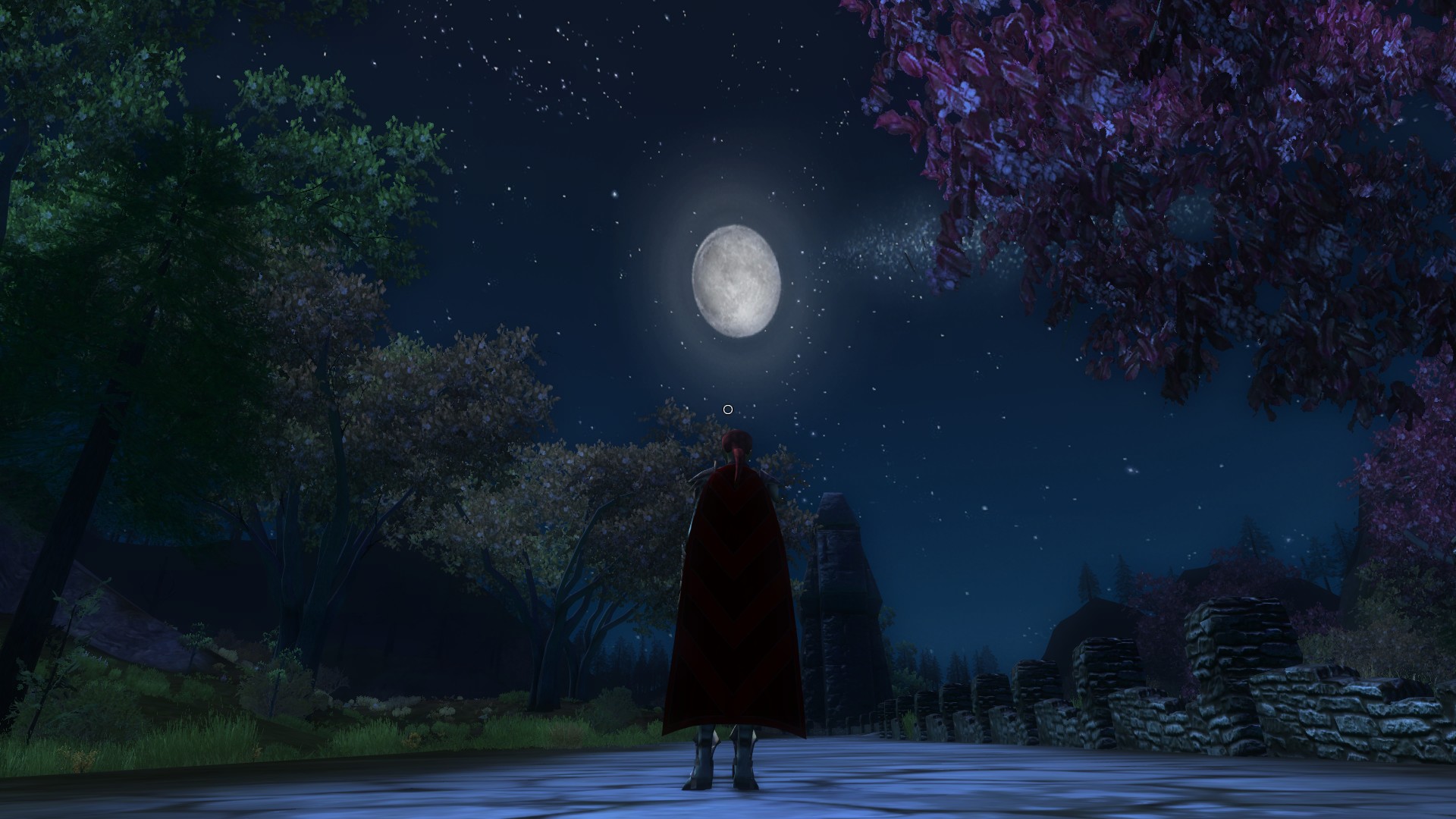 Polling will once more wrap up at 1:00 p.m. EDT on Friday, July 24th. Until I see those results coalesce, I think I’ll head back to the Borderlands and clear those objectives. Especially since some of the named monsters in that area aren’t spawning unless I reset the instance several times. Gotta love those known bugs, eh?

But I’m not the type to say I told you so. So here are some more hopefully helpful tips.
1) A hireling is practically mandatory for soloing. Once you get past level 2 quests the difficulty ratchets up quickly. It does take about ten seconds to complete the hireling summoning.
2) There are a lot of slimes and puddings that will damage your weapons. You can let your hireling fight them while you pull out your bow and back up or you can carry cheap wooden clubs to use against them. Purchase from any weapon vendor.
3) Weapon sets – When you open your inventory you will see a set of green squares below your item bags. These are for weapon sets. You can set single weapon, weapon and shield or dual wield weapon sets in these green squares. Then you can drag the green squares to your action bar for easy weapon swapping.
(I generally dedicate one entire action bar to ten weapon sets, even if all ten sets are not in use.)
4) Action bars – You can drag practically any item from your inventory onto an action bar, equipped or not. Potions and wands are obvious uses, but another common usage is for “clickies” which are items that grant effects on use.
For example: You start the game with a ring that grants water breathing on use. You drag that item to your action bar and then drag the item you would normally have equipped on the action bar next to it. Thus allowing you to quickly cast water breathing by clicking on it twice (Once to equip it and once to activate it.) and then re equip your regular ring by clicking it once. All without opening the inventory page. (It is the ring on the right side of the paper doll that swaps out for rings.)
5) Ghost touch weapons – It won’t be too long until you encounter your first Shadow or Wraith. These ghostly enemies have special protection from attacks.
Without a ghost touch weapon half of your attacks will automatically miss due to “ethereal”. A ghost touch weapon eliminates this protection allowing you to attack normally.
You can trade one “Ethereal Ingot” from the Keep on the Borderlands chests to the blacksmith located in the keep for a ghost touch weapon.

Matching the correct weapon set to your opponent is a critical part of playing DDO, especially at higher levels. Practice weapon swapping early.

PS: It is a good idea to hold on to at least one “Holy” or “Good” weapon, even if its a weapon you don’t normally use, for use against certain Undead that are immune to other damage.

You can’t always go by level when determining whether an adventure will be good for you or not. It really does vary from class to class and from adventure to adventure. Some classes are more challenging to solo and some adventures are just plain more difficult. (The Butcher’s Path is actually one such due to the number of kobold shamans that love to throw curses at you — it was a nightmare in the days before most debuffs were put on expiration timers.)

When you encounter a really tough one, you have a few options:

There aren’t any perfect answers, but the fact that you have multiple options means there should be something that works for you.

A limited number of encounters spawn each time you enter an open world area. So the reset and enter thing isn’t a bug to my understanding.

As to hirelings, you need to summon them at the start of an instance, or at the entry to open world areas. The idea being that you can’t just bring in 50 hireling contracts, dismiss dead ones, and have them do everything for you.

Tried this game again (had purchased it on release, but quickly shelved it). Unfortunately, from everything I could find out on the problem, the UI cannot be scaled in any way. This makes it far to small for me to comfortably play.

According to their own posts, SSG says that making the UI scalable is “…to difficult…”. I have to wonder about all those geniuses, before and after DDO, that were able to do it.

TERA PC releases an update with new dungeons and gear as...

Lord of the Rings Online pushes ahead with broadly unpopular patch...