What even is this game? This is a question I seem to be asking myself a lot as I continue to scrape at the surface of Star Wars Galaxies. I arrived to my task of checking out space combat wholly anticipating it to be a tacked-on and underwhelming experience and came away pleasantly surprised.

As usual, I had to do a bit of research work before I could get started on my starpilot’s journey: namely, a quick look at yet another Napyet Gaming YouTube video guide and a check of the SWG Legends wiki to understand just where I was meant to go. And it was Tatooine. Again. 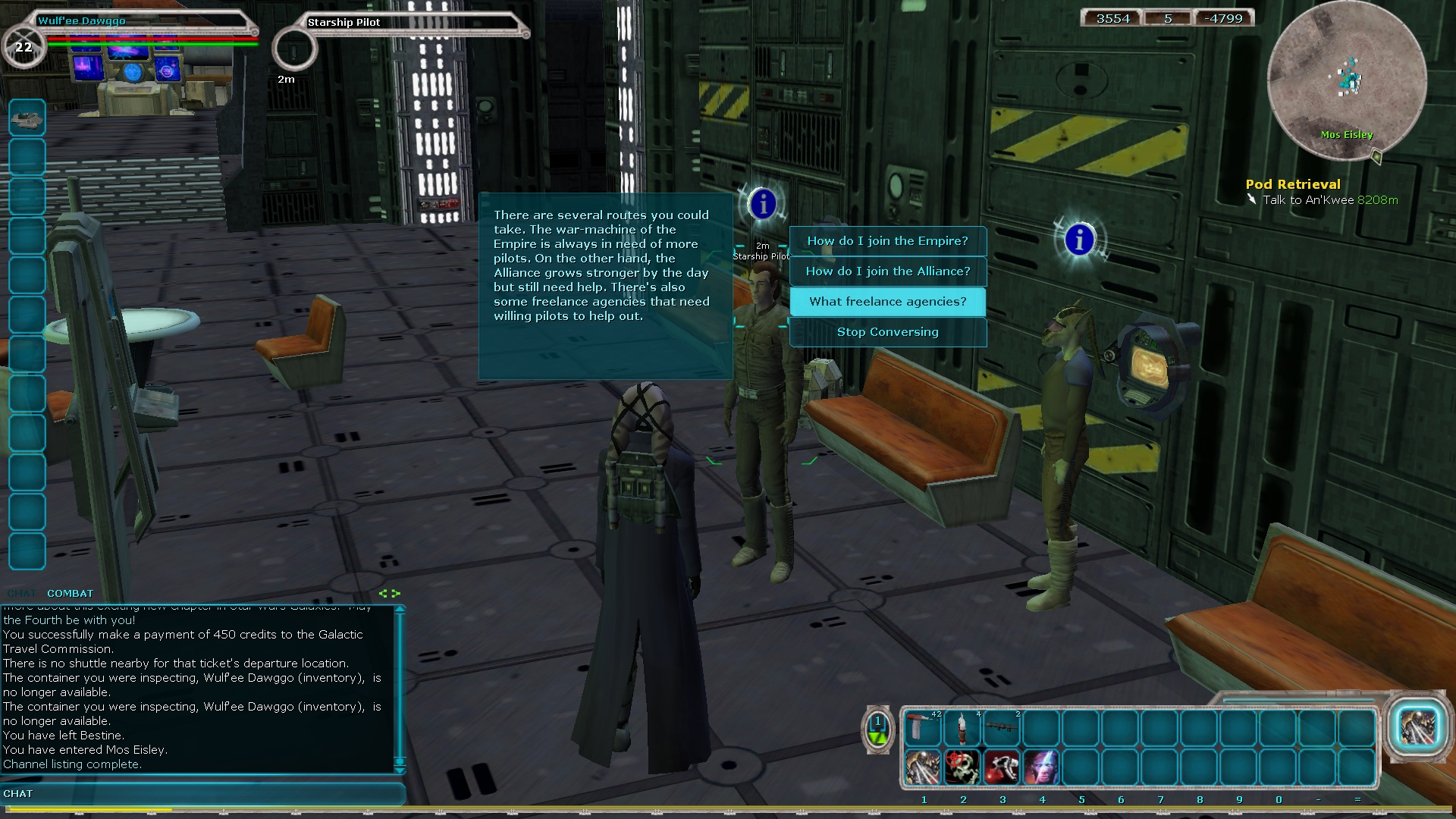 Initially I ended up getting a little bit lost and found. After some bumbling around, however, I found the contact I was looking for: an NPC that would get me started on freelance pilot missions. I sort of envision my initial main bounty hunter character to be the sort to take any job if the pay is good, hence the decision.

This particular NPC, a smuggler by the name of Dravis, was pretty amusing overall, as he immediately turned yellow and tried to give himself up to a couple of different crimes when I first spoke to him. After he was assured I wasn’t trying to turn him into any number of authorities, he set me about on my first few space missions as a freelancer. These were generally straightforward affairs, requiring me to fly to a waypoint and engage targets or in the case of one mission escort a freighter along. The first few moments of my time in the cockpit was figuring out how to map controls and confirming what button does what.

I’ve resigned myself to playing the space game on my gamepad for the time being primarily because I’m not really eager to go through all of those hotkeys and try to discern what’s the best course of action. Also, flying in space with a mouse and keyboard has always felt off to me, and while I’d like to have ideally used my HOTAS, I assumed it was probably asking a lot out of an extremely old MMORPG. (Bree assures me it will work just fine – better than fine!) 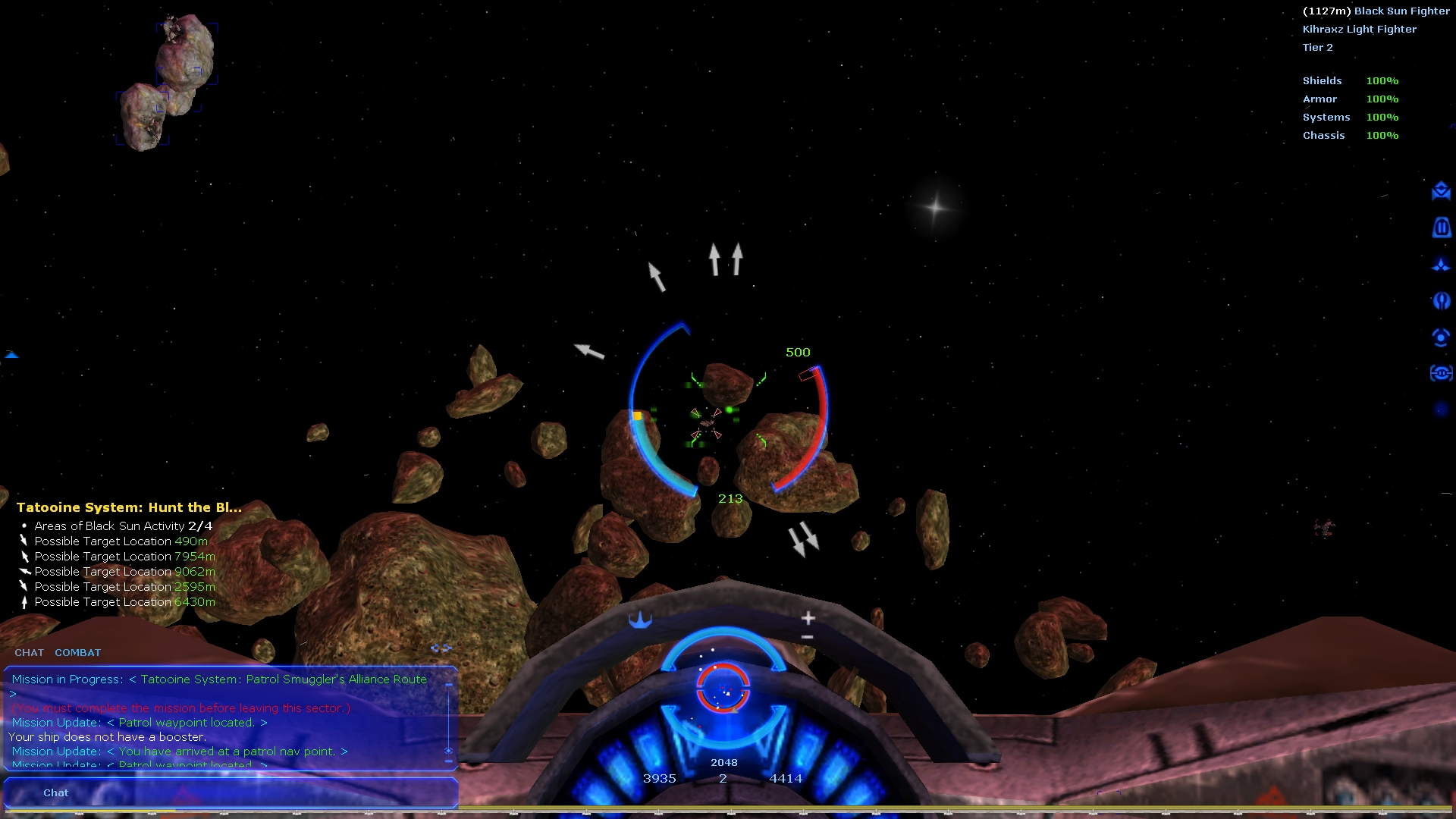 So how’s the combat feel overall? Not too bad, honestly. The way my ship moves (along with the use of a gamepad) gave the whole affair a sort of arcadey feel, and while I’m more a fan of the space sim style of gameplay, it’s really hard to fault the way SWG does things here.

There was a point, however, where I was on the bring of quitting. During one of the missions, I apparently was biting off more than I could chew as a bunch of Black Sun pirates started to menace my ship. I’m pretty sure they were respawning almost immediately, which saw things devolve into an absolute laser fire smorgasbord. Eventually, raw numbers put their toll, and I was forced to eject. Except I couldn’t find the eject button, and remapping what I thought was the right button — the escape pod button — decided not to work, which meant I got blown to smithereens.

This, in turn, introduced me to a form of added insult to injury as my ship ended up respawning but with all of its systems at zero. I had no engine, no shields, no weapons, no nothing. The game literally respawned me in a dead body. And then I got blown up again.

After a few moments of agitation, I managed to work my way past the annoyance and power through it. This was done by having my crafter put together a bunch of starship repair kits since there weren’t very many on the market at the time. If nothing else, this kind of reaffirms my decision last week to pursue the shipwright profession — this absolutely feels like a market that does not see enough love. 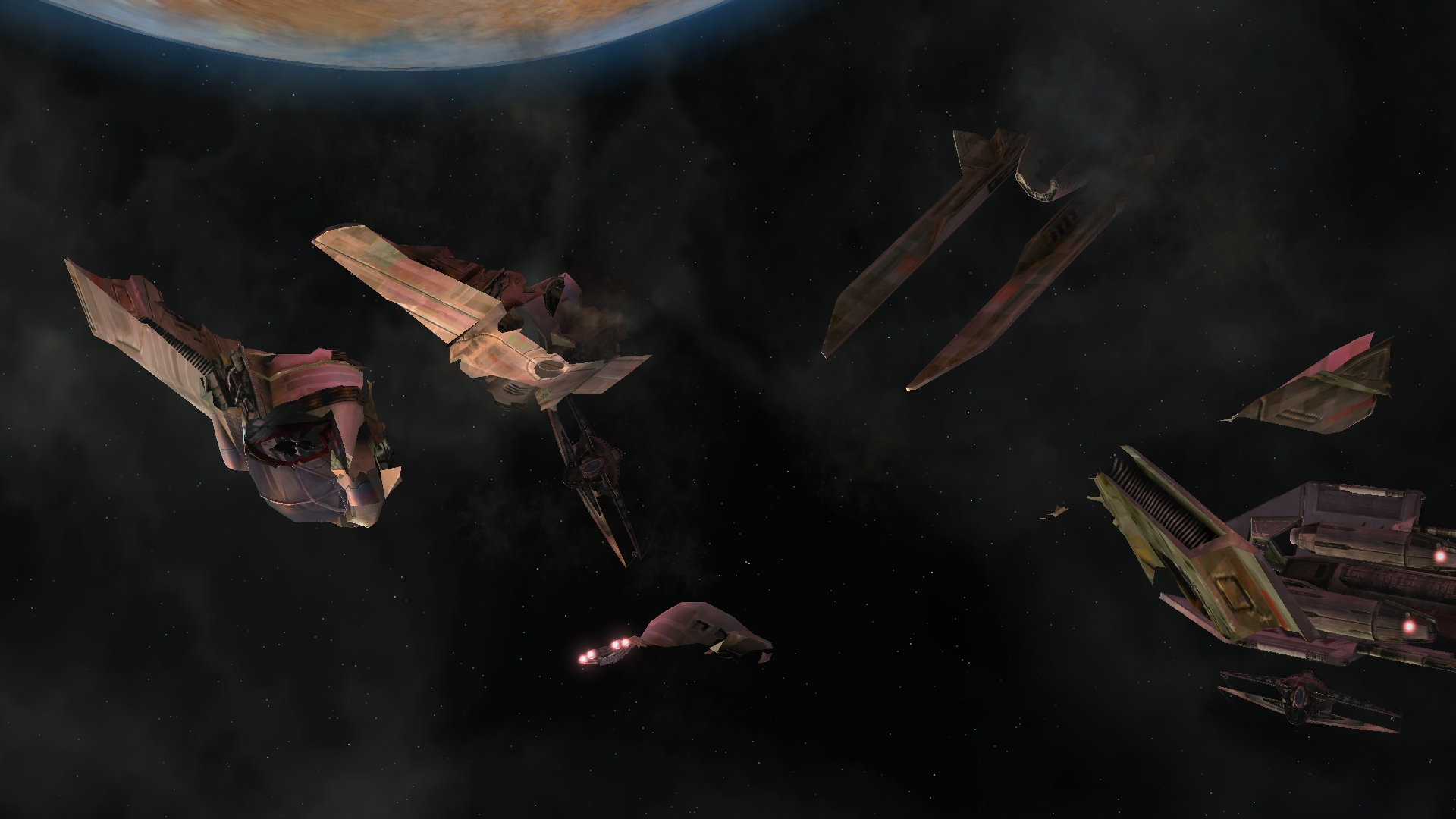 Once I had gotten my ship shipshape and followed through with one more mission, I decided to take a look at the pilot’s tree to get an idea on what sort of skills and gear I would later have access to. It was at this point that it once again became clear to me that the space game in SWG is pretty involved. Apparently, there are freighters and transports and gunships and shuttles to learn how to pilot, meaning there’s possibly more than combat. It’s not quite as involved of a space game as an Elite Dangerous, but I got the impression that there’s more to it than just running to an NPC, running back to a terminal, and then flying to objectives.

And that’s kind of been the whole throughline with my time in SWG. There’s more to this game than meets the eye on pretty much every single facet to it. The crafting and gathering systems are deep and engrossing and technical once you start to really get in. The space game, while presenting itself as pretty humdrum, has a lot more to consider when you start to dig into the various components that can be plugged into a ship. Honestly, about the only thing that falls pitifully short is the on-foot combat, but that can be almost entirely ignored in lieu of space combat things. I feel like I’d be pretty happy chasing that particular tree and filling that out.

It’s really astonishing how much SWG got done right, or at least started doing right, almost two decades ago. There’s so much to this game if you know where to look, and while knowing where to look requires a bit more out-of-game effort than I’d prefer, it ultimately feels incredibly rewarding. The sense of discovery I feel when I fire up this game is palpable, even though I’ve been standing on the shoulders of giants (read: Bree) through pretty much the entire run. Better yet, when I think I’ve figured something out, another layer appears or another tool is presented to me. There’s a lot going on here is what I’m saying.

But even knowing that, it’s hard for me to recommend this game. 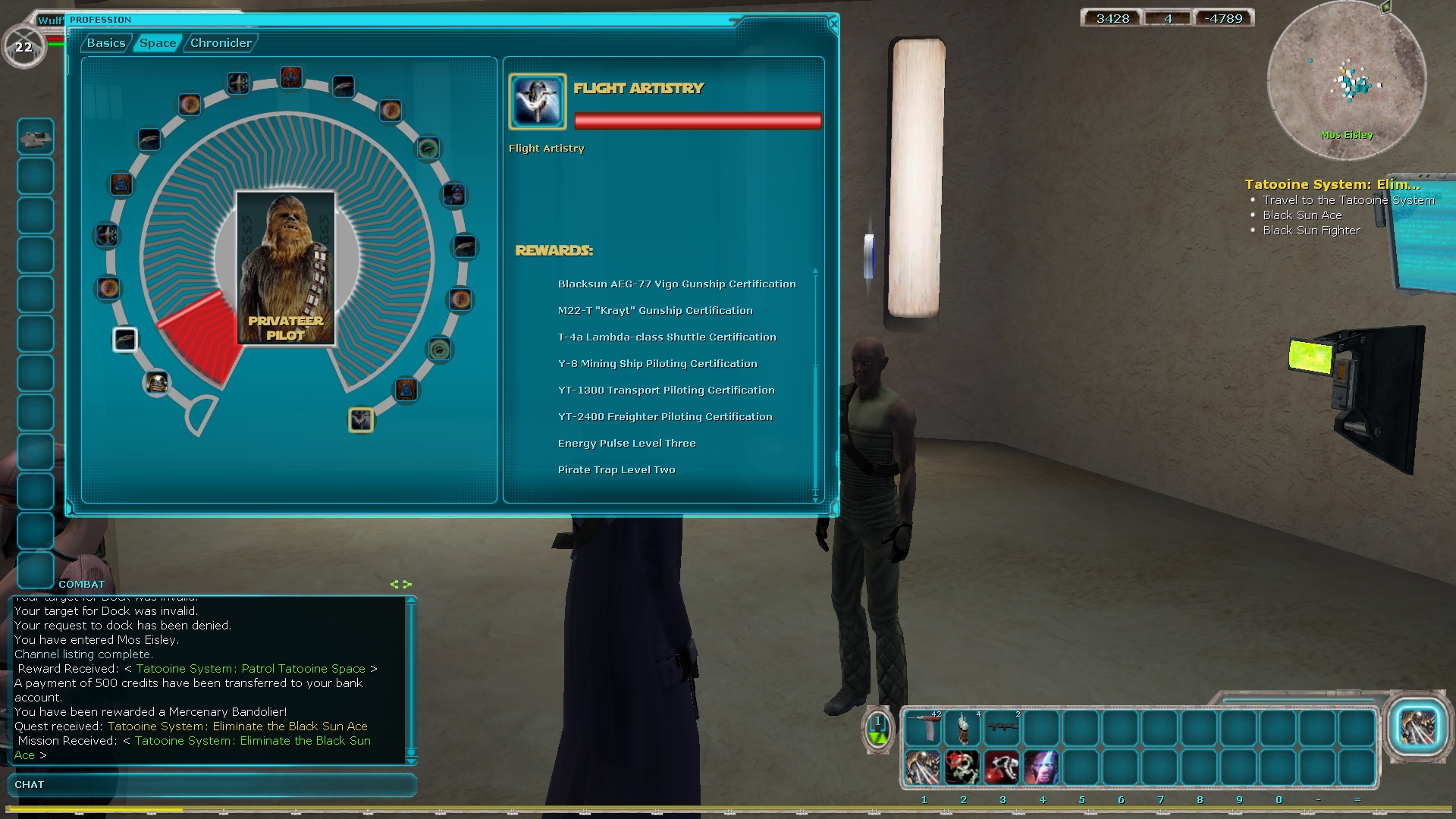 This is not an easy game to start with, and I can’t help but put an asterisk on my entire experience because Bree helped me out in so many ways. You get out of SWG what you put into it, and that’s not something many MMORPGs do nowadays, or do particularly well, and if I’m honest, there’s really nothing wrong with the new guard in a lot of ways; the good old days weren’t always that good if we’re honest with ourselves.

So maybe I can’t recommend it, but what I will do is suggest that fans of our genre at least give SWG a visit, especially on the Legends rogue server. This game has a pedigree for a reason. It’s talked about in awe for a reason. It’s put on a pedestal for a reason. A number of extremely good reasons. And those are worth experiencing yourself. Set aside a couple of weeks or so, give yourself time to read the guides and wikis and watch the videos that are out there, and maybe you’ll come to appreciate why SWG is so often celebrated. And who knows? Maybe you’ll emerge changed and invested like I am.

No poll this week — this whole thing turned into a Star Wars Galaxies blog post since I wanted to wrap up my feelings, and so Wakfu was pushed aside. But I will be sure to start that game off next, report in with my experiences, and ask your help in where to go next. In the meantime, I’ve got spaceships to blow up and harvesters to manage.