Amazon Games has just announced on Twitter that it’s postponing the launch of New World.

“[W]e’re going to take a few extra weeks to smash bugs, improve stability, and polish the game,” the studio writes. “New World’s new global launch date is September 28, 2021. This was not an easy decision to make. We know this isn’t the first time we’ve changed our launch date in pursuit of quality, and that it can be disappointing to wait a bit longer. But we want to be sure we deliver you the highest quality game possible at launch.”

As the studio hints, this marks the fourth delay for the MMO; the company had previously planned on an August 31st launch, the announcement for which was already its third postponement. During the game’s alpha and beta, we penned several impressions pieces on the game, overall finding it to be in a relatively good place technically, so it’s not entirely clear what the studio can do with just the extra month of time. However, as we noted on this week’s podcast, the end of August can be a tricky time to launch, so maybe this delay won’t be a bad thing anyway.

The Stream Team: A first-timer’s live exploration of the New World closed beta

Hands-on with New World’s war mode: All the fun you can have blowing up a fortress of lumber

A message from the New World team. pic.twitter.com/oAZdK7dxTn 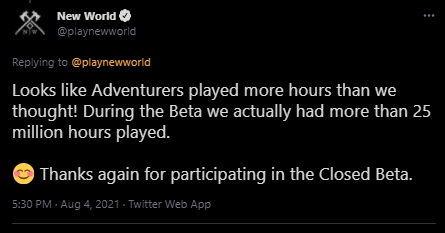 Good call but needs some major QoL to the start experience. Not being able to play with your friends from the beginning won’t go over well and isn’t conducive to keeping players.

It was the right decision. Has all the bones of a good game, still needs a little polish and tweaks to the enemy AI. With a little bug squashing and combat additions this game will be a big hit. Twice now they have listened to feed back.

Still not impressed with the whole “conquistadors oppressing the natives” stench this game gives off.

When the natives are zombies and monsters, I think it’s okay.

I mean, there is still a lot of conquistador-like fashion and thematic, but now the place doesn’t seem to have natives, only corrupted people. It still has a lot of weird symbolism but it’s better than it was for sure.

Good for them, honestly. My experience resembled a technical alpha/alpha-1 state. So much was missing, buggy, and just not up to modern gaming standards.

Oh crap. I booked some leave from work for this. I should be able to reschedule my time off. Has me worried though since it was scheduled for last year but delayed. Did they blame the pandemic? Seems like they should have had time to sort things out if it was anywhere near ready back then.

I should have known and waited to book my leave in. Fortunately, my work is really cool about leave changes. I should be fine apart from looking a bit silly.

Pandemic wasn’t to blame for this. They need time to address bugs and stability issues, which would have hampered launch day.

wait, wait.. they want to delay it a little in order to improve it based on beta feedback??? THE MONSTERS!!! lol

This brings the release closer to Lotro’s Gundabad release.
I hope they remain at least a month apart.

Disappointed to wait another month but its a good call and I’ll deal with it.

May give Lineage II – Aden some time while waiting for the shiny new things from SSG and AGS.

The one thing I think they need can’t be fixed in the extra time – a story. All the quests are kkill/collection, exploration(not fun, just boring), and courier services. It gives credit to the designers that the combat and interactions are done so well, that it’s at least fun while you’re going from point A to point B. The storytelling just isn’t there, as far as the background of the island’s history. I got to level 28, and didn’t run into anything, other than the old fishing guy that makes you run to get the thing and get another thing to make the thing to beat the thing. That was the closest I got to anything.

I did enjoy the game for the look, the original premise, and the combat. It’s ready for release, and I’ll get my 40 bucks worth out of it. I just wish there were more RPG to this MMO.