You know how you’re granted a look at a new game, whether it’s through an open beta or a demo or a preview event, and you have to kind of stop yourself from playing the game more so you don’t completely spoil yourself? That’s kind of where I’m at with New World right now.

I was granted access by Amazon Games to a special server that allowed me the opportunity to try out this game at mid-level and max level play, full of all of the bells and whistles and items I could want. It was, in essence, the game in creative mode to let me try out nearly everything that could be offered both at level 30 and level 60. To say that I was pretty much spoiled for choice was an understatement. 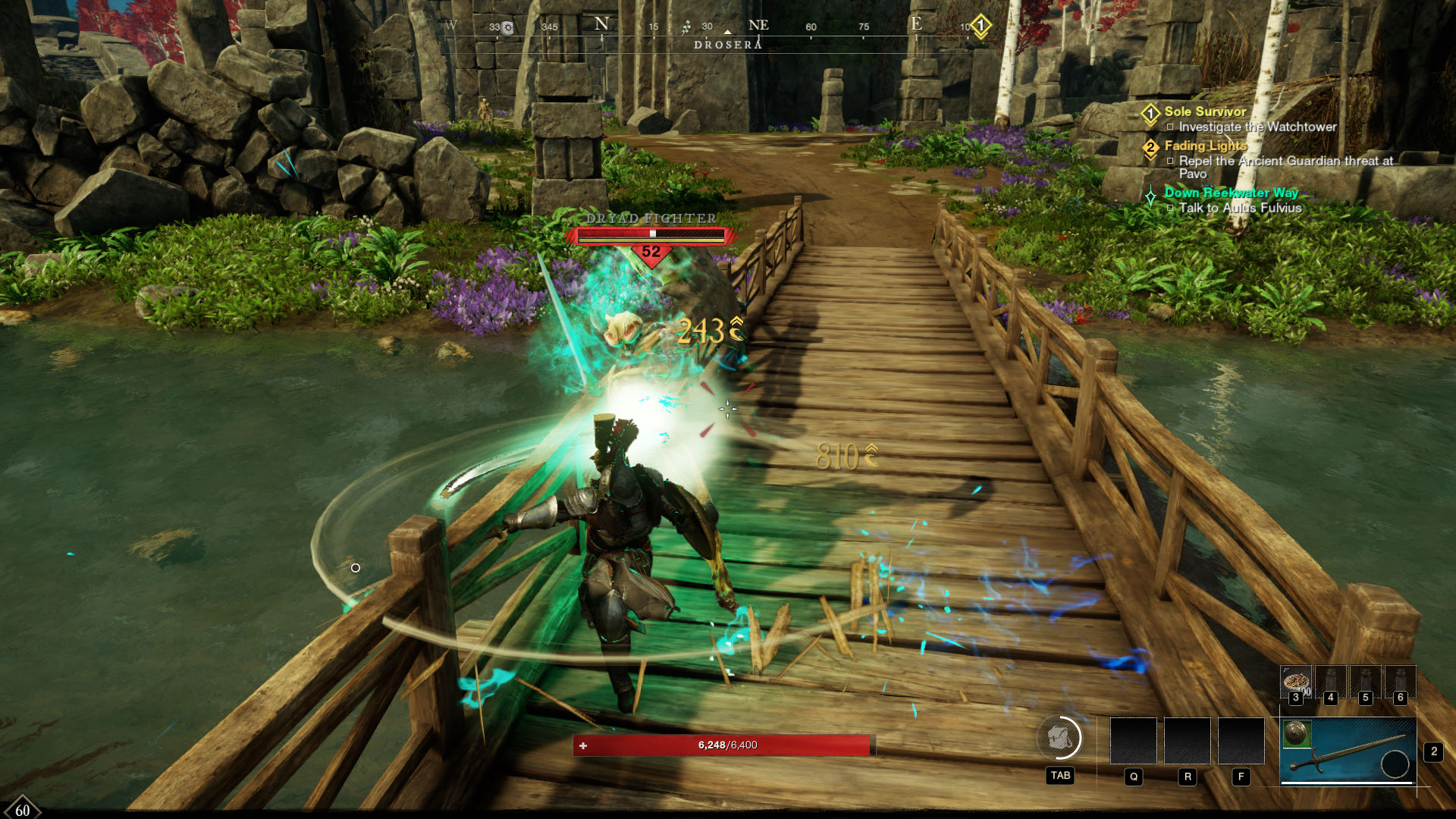 I started my time in the preview with a max-level character, and I have to admit that my head was kind of spinning as I went from whim to whim. Maybe I’ll check out all of the weapons. Oh, but maybe I’ll play around with skill trees and plan builds. But then there are some neat things to explore. Also there are missions I could take up. Oooh, what’s that over there in the distance? It took me a lot of time to settle myself down and outline small goals for myself, and one of the first was to try out weapons.

Each of the weapons in New World has some truly distinct features to it. Genuinely, no two felt the same even before factoring in how the two different skill trees available, and applying skill points from each tree — or a little bit from both trees — just made things even more distinct. The idea of being able to “carve a new destiny” doesn’t really feel like a boast. There is some truly interesting build potential going on here, provided you pair the right weapons together. 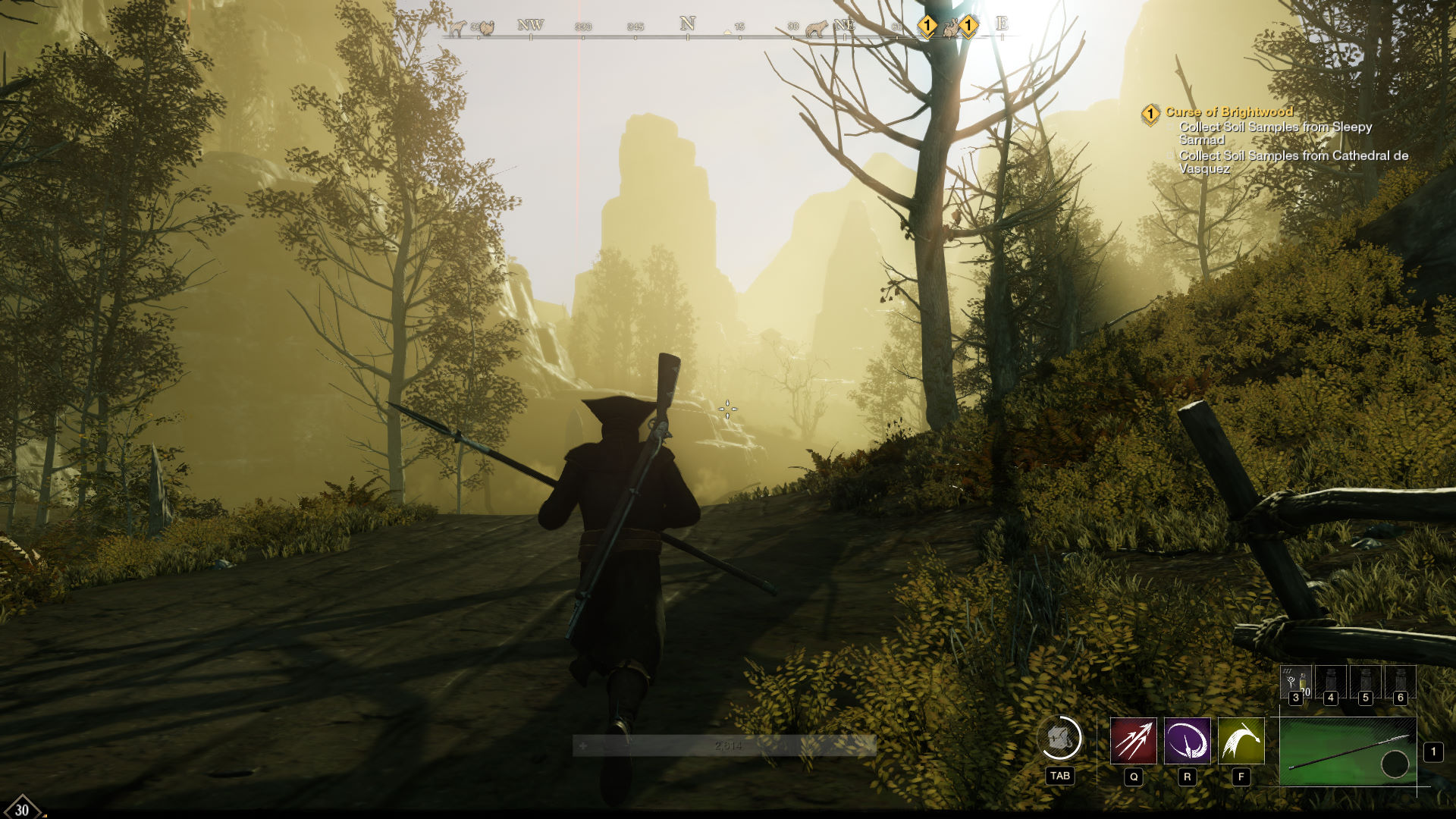 Of course, personal preference will factor in quite a lot here. I was pretty sure I was going to enjoy using the magical staves, but I found them all to be a bit finnicky, even if one of the fire staff’s first abilities basically lets you use it like a flamethrower for as long as you have mana. Aiming skills, whether they be projectiles or area effects, always felt a bit awkward somehow, with bare little margin for error. I can kind of see what Bree meant when she was having trouble healing that dungeon during the press demo last May.

I then decided to try out some dexterous weapons like the rapier and the spear, following the rapier’s dodge and counter-centric tree, but then I respeced into the tree that was all about applying DoTs and then burning them for big damage with a specific skill. After some further futzing about with weapons, skills, and gear combinations, I settled on a build that merged heavy armor and a sword-and-board along with some dexterity in the form of the rapier’s DoT tree. I effectively made myself a character that could switch from DPS to tank as the situation demanded, and puzzling it all out felt extremely rewarding. Especially when I was able to take on what otherwise might have been overwhelming odds. 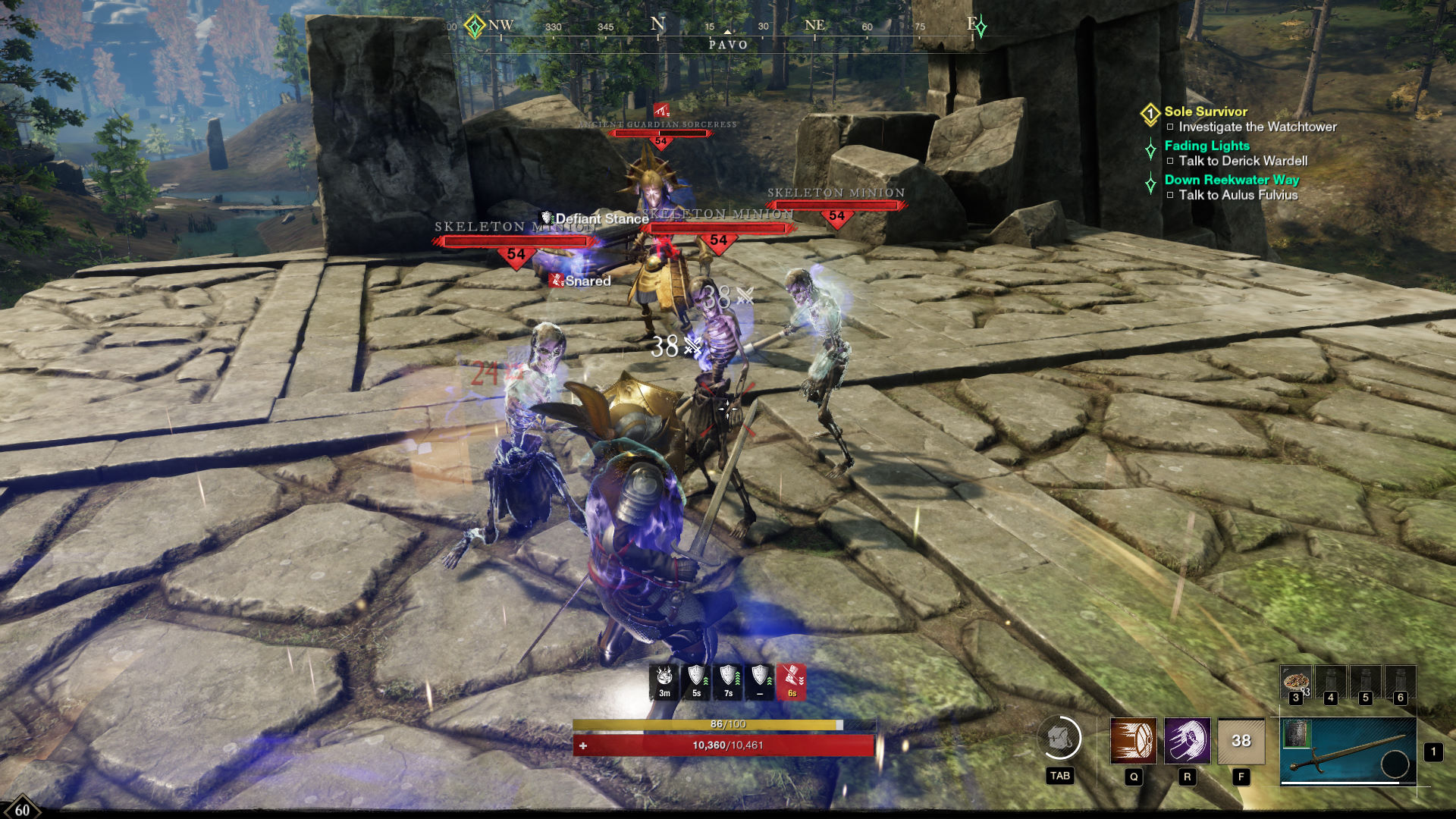 As far as activities at max level, the zone I was in was gorgeously laid out but was otherwise another standard MMO quest hub, along with a space for doing some faction-specific quests on top. Most of my time was primarily spent roaming the world, finding ruins to delve into, fights to pick, and goodies to loot. I have to admit that said loot didn’t feel particularly good, but that’s likely more owed to the fact that my character was kitted out in some truly premier equipment. None of these features is particularly groundbreaking if you’re a PvE-minded player like me, but something about the way New World feels and looks seems to urge me onward even if the way adventure worked was kind of humdrum.

This was reaffirmed when I switched to a different server to try out a level 30 character. This time I went with an almost pure DPS build, pairing the musket’s long range skills with the hatchet’s aggressive tree. Basically, I crafted someone who was able to tear off sizeable chunks from foes at range, then finish them off with some mad swings from the hatchet. It was a mixture of precision big DPS and small, angry murder blender. And once more, gameplay was pretty much the same here: get quests from NPCs at the hub or at the faction board, do the kill 10s, maybe explore an area or two, and turn them in. Again, nothing groundbreaking, but it’s all done with competence and a sense of style that’s genuinely unique.

That’s kind of what New World does best in my opinion. Its world is a fascinating place that I would like to learn more about. And while questing is nothing new, combat feels extremely snappy, with every attack feeling truly meaty and impressive. When I was using my sword and shield, I could feel like I was standing up against withering assault. Using the hatchet gave me a sense of being an absolute murder hobo as blows landed with dull, wet thunks. The echoing crack of the musket as a shot went off was something to behold.

Also, crafting a build is a major point of fun for me. The game seems to encourage some minor diversity in builds, with gear that can provide boosts to two different stats such as strength and dexterity to make things like my tank/DPS character work. Of course, there are gear options and point allocation choices for those who want to focus down on one style, but the point is there appears to be a bit more room for creativity here. It’s no TSW, but for my time it had a bit more wiggle room than expected. Whether that holds up in PvP as balance tweaks push forward remains to be seen, but it is my fervent hope that AGS doesn’t overstir the soup here. 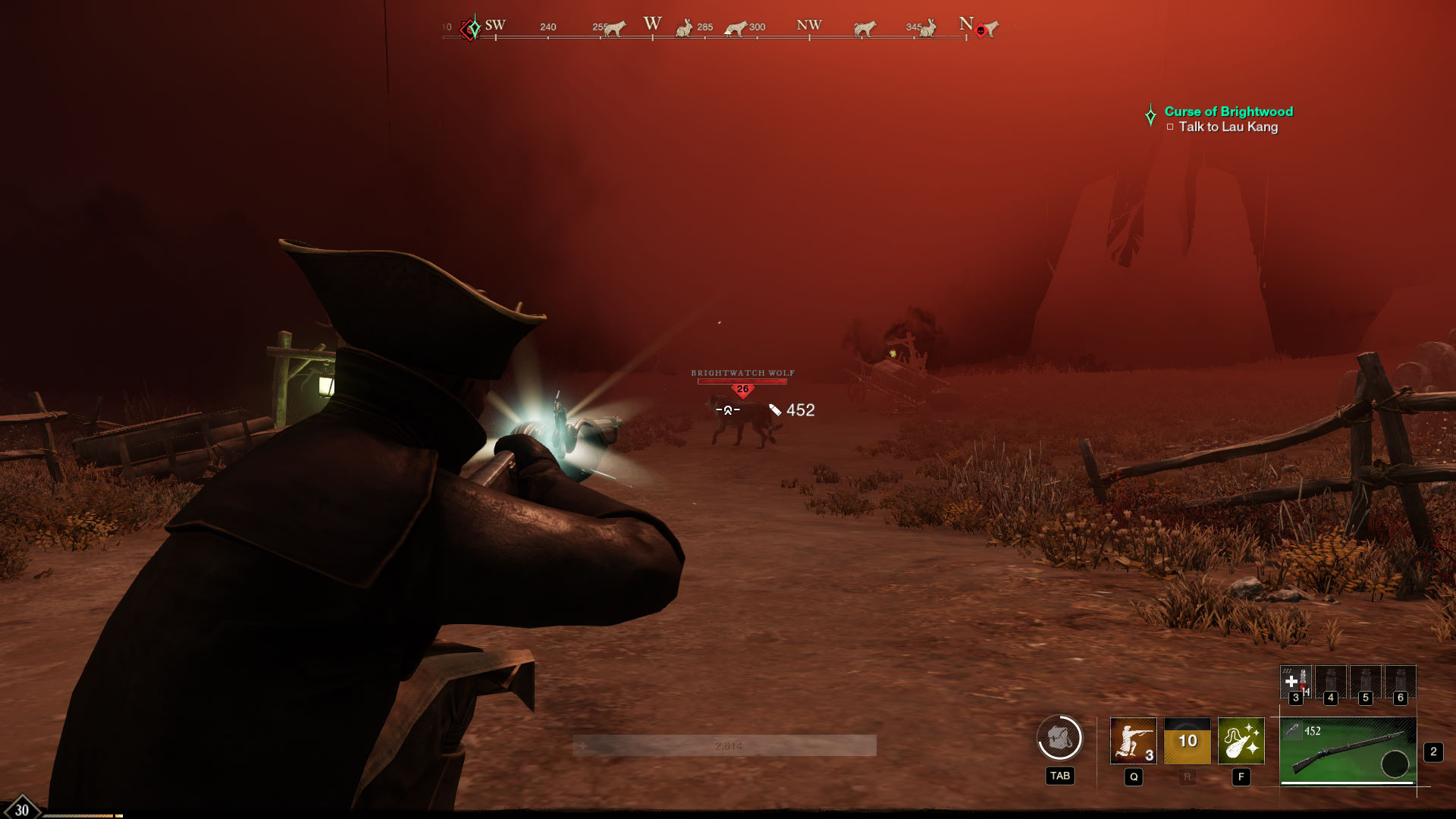 Of course, I didn’t get to touch on everything. For example, the group-centric mission board quests weren’t something I took up because I was very often completely by myself. I also didn’t touch on crafting primarily because these level 30 and level 60 characters had so much stuff I never wanted for anything. But then I also had to force myself to stop playing, because if I didn’t I’d keep firing this thing up over and over, tweaking builds, trying new things, exploring more of the map, or otherwise spoiling everything else waiting in Aeternum.

I could have gone longer. I could have delved deeper. But I also didn’t want to spoil myself because I’m ready to achieve these vaunted heights under my own steam. I still can’t quite put my finger on what makes New World something I kept wanting to peer into over and over again, but it is. And now that it’s released, I’m eager to really dive in for real this time.