Those hoping to get some good playtime in with New World this weekend need all of the strategic aid that they can get, what with the servers literally overflowing with interest and demand.

To help figuring out when and where to play the game, Amazon Game Studio posted a full list of its legion of servers along with helpful icons stating if the shards are online, offline, at full capacity, or undergoing maintenance. It also notified gamers that full servers would refuse any new character creation until they got, um, less full.

The studio repeated its promise to both add to the server count and increase the relatively limited population caps of the existing servers. On Saturday morning, New World continues to sit very comfortably at the number two spot on Steam, with well over a half-million players in the game or sitting in the sometimes hours-long queues. The game set a new concurrency record on Friday at 800,000. 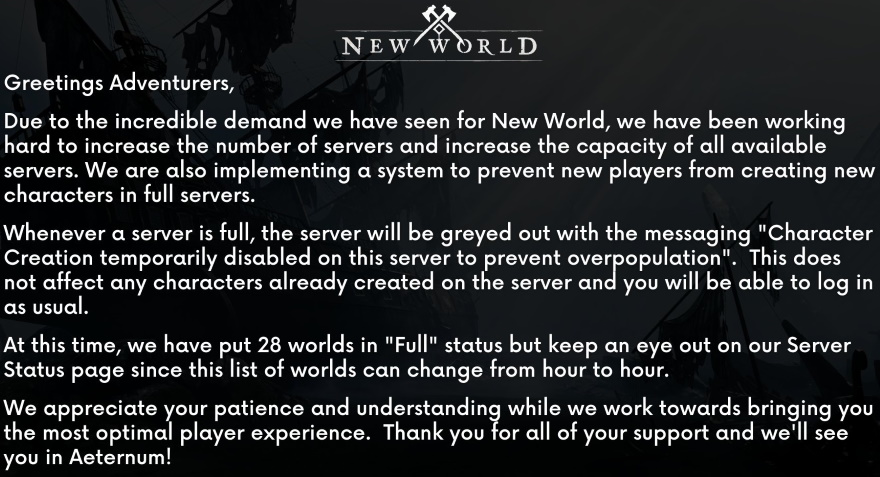 I actually got in early on Sunday morning, played for a few hours then had to AFK and couldn’t get back in time to stop the boot. That was all for that day. :D

It actually grazed 1 million concurrent today. Nice rounding to half a million though, lol ;)

Give it 3 months after that “new car” smell has worn off and people realize it’s a fairly shallow romp with not a whole lot to do but grind at endgame or PVP endlessly.

To be fair, those are all the tripleA MMOs right now, with ESO being the exception. Can’t speak for BDO.

BDO is more of a sandbox by it’s nature so it’s kinda up to you what kind of goals you want to accomplish. Like most people follow the simple gear grind where you get silver usually from grinding mobs then buy upgrade mats to make attempts to upgrade your gear. Some people do this for PvP purposes. However people like me didn’t really do this and for example I played BDO like a 3D Farmville and just tended my farms, workers, and processed materials into crates and just worked on my Lifeskills. This works in games where the goals are open ended and long. Like reaching max lifeskills in BDO would take many years and I never came close playing hard for 4+ years kinda thing.

That’s not exactly true. The main AAA games you’re probably referring to, offer far more than your basic repetitive fetch or kill quest repeated constantly from level 1 to level X, which is why those games still exist and more importantly, have retained very sizable populations over the course of several years.

New World needs to prove that it can retain a significant population beyond simply being “new” and heavily marketed. Given it’s current content, who can say? About Black Desert? It also offers much more variation as far as quests and classes are concerned. You use more than 3 powers per weapon, etc.

Don’t even get me started on the character creation, where EVERY MMORPG far outclasses New World.

That’s not exactly true. The main AAA games you’re probably referring to, offer far more than your basic repetitive fetch or kill quest repeated constantly from level 1 to level X, which is why those games still exist and more importantly, have retained very sizable populations over the course of several years.

I think this is a generous assessment. The main AAA games i’m refering too have never really broken new ground other than some small features and they just put a pretty new coat over their design choices. GW2 makes questing less complicated, but it’s still questing. ESO has the same “collect 4 bear nuts” but in a more refined presentation that makes questing way more immersive. WoW offers absolutely nothing besides raiding that has complete focus from their devs. I can be more generous to ESO since it has Housing and a “okish” crafting system but it’s really not that much.

TripleA companies don’t break a formula when they have millions on the line. I think you underestimate how thirsty for good MMOs players are, because most tripleA mmos are quite mediocre and yet successful simply because of the bar being REALLY low. That doesn’t mean they’re bad. It means they’re simply not that innovative.

The endgame for GW2 is grind fractals, raids and open world events and missions for PvE, grind conquest and WvW for PvP and fashion wars.

The endgame for ESO is get your equipment and do trials/dungeons non-stop for PvE, grind Cyro and BGs for PvP, and grind quests and dungeons for solo after grinding for your equipment. MAYBE you go Housing/Fashion Wars but those are kinda expensive on ESO.

The endgame for WoW is grind raids or grind BGs/Arenas.

You get my point.

Don’t even get me started on the character creation, where EVERY MMORPG far outclasses New World.

Your comment seemed to suggest that the questing offered in New World is no different than any other AAA game currently on the market today. This I feel is completely incorrect, and THAT was my point.

My point was never about covering or breaking new ground, just simply covering the ground they walk on well. In that I mean questing that actually has purpose and meaning, weight and depth. ESO may have some fetch quests scattered about, but the overwhelming majority of it’s quests are based on character and story, not just presentation. Substance, not just style. The same cannot be said for New World.

In any case, practically every AAA game on the market today, including ESO, does a far superior job at questing than New World, which only offers the most basic and bare minimum types of quests that you can imagine, lacking any sort of depth, purpose, and in my opinion, reason other than moving the experience bar. These quests make up the majority of the game, covering the entire leveling process with very little variation.

Even though you didn’t mention the game’s so called character customization, I brought it up just to point out yet another area where the game just offers nothing more than the absolute basic minimum.

Implying that New World offers more or less the same questing as other games today is a case of being MORE than generous!

Right, so I was on the fence with the game. I put it away, moved on…but then I kept coming back. Then, I hit Brightwood and now I’m hooked. For those of you who have been there, you might know what I’m talking about.

It’s a beautiful game, hands down. I’m willing to try and make it to “endgame” to see how things play out.

This game is fantastic

I am not giving in to the First Week Hype. I will wait for the Obligatory P2W Rage and Content drought that’s coming in about a month.

All MMORPGs are Guilty until proven innocent.

I doubt they’ll turn the cash shop on its head next month. Next year maybe.

Well fuck it, I bought the game.

Is their a Massively OP presence on one of the low Pop Servers?

Ok, so here’s the status right now for a MOP presence, all asked for permission to share:

The server initially would be Minsa/Minda/Whatever the name is. I was considering rolling there too, but all the MOP staff were getting huge queues. So they kinda split between servers. I wouldn’t roll anything dedicated right now, because a lot of the players are waiting for the server situation to get stable before choosing their permanent homes. As of now, the server i’ll roll on NA is Charybdis.

I’m sure we’ll all consolidate once the free transfers start, from what I understand this game requires being in a Guild that has some of its crap together at least. I’ll check that server out. Who knows maybe the reason I’ve been in such an MMO rut is because I needed to try a different genre like Sand Box

wonder if it could be helpful in PVP Zergs.

You still on a Latin server or did you switch to the US, I’d rather pick a Low Pop server with a few familiar faces?

Didn’t log in this evening yet. Next time i play i’ll probably roll on a low-pop NA server, even tho i’m getting 200ms ping.

Doesn’t matter. Rolled on the RP server and had a massive queue. Rolled on a low pop server which was fine for ONE day, and now is med-high pop with a queue.

Low pop only allows you to play a few days before itself becomes high pop because not enough people can log onto the servers they have.

I think its embarrassing for a major cloud provider who promotes cloud elasticity to be in this situation 5 DAYS LATER.

I mean, my server doesn’t have a shred of a queue.

5am-9am for Utopia = fine. Any other time = don’t even bother trying. The lower pop server I rolled my “Alt” on is fine and is actualy lvl 30 just from harvesting nodes which my actual main character is only lvl 18 due to queue time.