We’re guessing the engineers at Amazon Games aren’t getting much sleep right about now. Since the launch of New World on Tuesday, the servers have been slammed with the typical big MMO launch problem: not enough room for the huge numbers of people trying to play. And they are indeed huge numbers; the latest record was set yesterday at 758K concurrent, though again that’s folks in-game and waiting in-queue to get into the game. As I type this Friday morning, more than half a million people are in there now, and Steam reviews have recovered from the obvious review-bomb that went on earlier this week.

So where does New World stand right now? Well, over the course of yesterday and last night, Amazon continued releasing new servers in just about every region, in addition to rolling out a client-side patch to make the queue itself more stable. (There was nothing quite as enraging as waiting for hours in a queue only to be booted out of the game right as you were finally logging in. A bit like waiting half a day to ride a new roller coaster, only to have it break while you’re literally at the front of the line. I speak from experience!)

Last last night (EDT), the team admitted that it had actually been “surprised” by the huge influx of players for the game – over a million people total on launch day and growing every day since – which presumably is why a studio whose parent company literally runs AWS was a bit unprepared. The studio now says it has “more than doubled” its server count and is still “working to increase the capacity of all available servers to support a higher population cap.”

Once again, the studio notes that there are many servers in every region – 40% – that have low queues or no queues at all, while those from day one are pretty much universally bogged down in multi-hour waits. Amazon is encouraging players to start up on those servers instead and promising transfers next week.

“We are also working hard on a feature that will allow you to transfer your characters to a different server, so if you choose one now just to get up and playing, you can make a different choice later to play on a server with your friends. Our goal is to release this feature next week, once we’ve thoroughly tested and are sure it’s ready.”

The problem, of course, is that day-one players are now entrenched on the original queue-logged servers, with characters and communities they don’t want to leave. And until Amazon actually does release that transfer tool, many of them will continue to choose to wait it out. 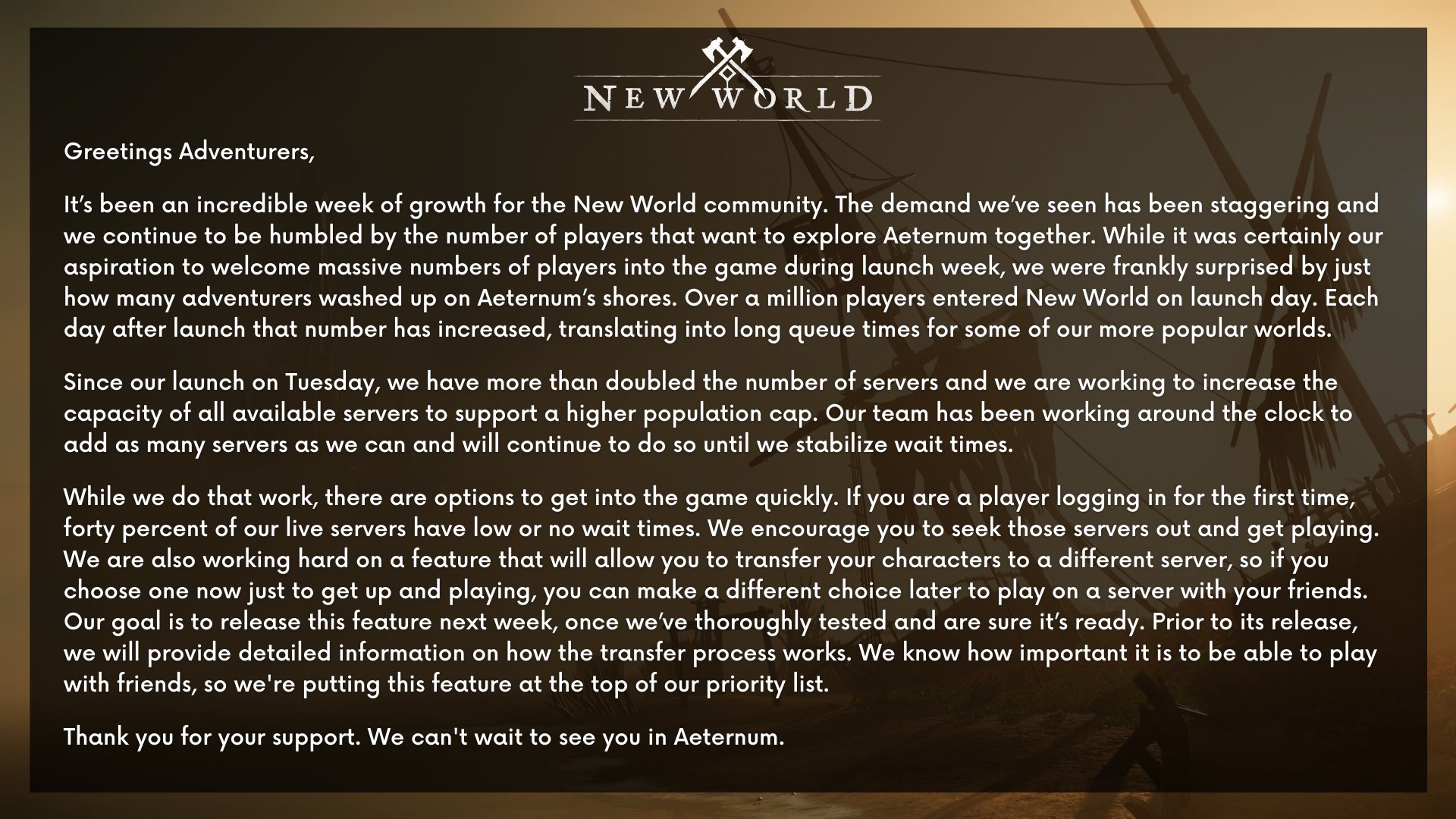 I personally gave up on my original server last night and rerolled on a server with an even dumber name – but no queue – so we’ll see whether the weekend causes more folks to break.

After many failures and setbacks in gaming we have a success. So proud of the team for the persistence. View setbacks as helpful obstacles that drive learning. Whatever your goals are, don’t give up no matter how hard it gets. @playnewworld (1/2) https://t.co/LK0VUdCSS9

The thing that annoys me in all of this is, the game has more bugs and performance issues than the previous two months of tests had.

I understand the priority of working on the queues, but for the first time since the Preview last year, it feels like they rushed out an update and broke things.

Unpopular opinion time: Amazon is a much more evil company than blizzard.

I think they’re both extremely horrible on their own ways.

Bezos…really? Don’t you have more pointless lawsuits to file and more petty/dishonest marketing documents and more fires from the latest open letter detailing toxic work environments at Blue Origin to deal with? I mean, your company my derail huge efforts in space exploration because your salty your company that hasn’t launched any payloads and was more expensive and less technically sound than alternatives lost a NASA contract. But I guess at least BO’s submission didn’t include NEGATIVE PAYLOAD WEIGHTS, ey Dynetics? Nobody wants or cares about your gaming takes.

I’d have liked to have seen a queue reconnect priority system in place for those that got disconnect errors while waiting in queue rather than placing them back at the start of the queue, among other efforts to alleviate this kind of problem.

How are players “entrenched” on these servers?
Seriously, it’s only day FOUR. And if we assume a significant amount of those hours were spent en queue….is moving to another server (like you did) really that onerous a challenge? Do they really have these durable friendships that they’ve built over the last 96 hours?

Granted, this doesn’t exonerate Amazon for crappy planning. The idea that they of all companies have load queues is…hilariously dumb.

people have a history there, you may think that its been less than a week but it doesn’t matter. People play with friends, guilds, and ties that bind, and for many people its everyone goes or not.

What people are underestimating is that it could be like guild wars and the server communities as they are now could be completely different in 2 weeks, so you can’t plan on anything anyway.

I rather sit in a queue now and play with a clan of 100 people that i know are stable, then play now and end up solo on a fairly barren realm.

These type of games become boring solo, a lot of the content in the group and guild level.

Group which i am part off did open a temporary chapter elsewhere so that people can play now and transfer later but if you already have a character on that server it is not an option as the game does not allow you to have multiple characters per account on the same server and i am not yet convinced of the game fully to buy more accounts.

Companies have been built, territory conquered, relationships build. Sure, it may only be the initial phases, but i personally have a ~10 man group at various stages of progression. It would suck if we were to fragment and/or start from scratch now that we had that initial momentum going.

Updated with the Bezos quote.

Sorry if I’m just missing it, but which quote is from Bezos? The blurb? The ‘statement’? I don’t see an attribution.
If I am not losing my mind, and you add such, feel free to delete this comment. :)

I think you’ve gotta refresh – it’s the tweet in the update block. :D

not really, that’s why I say it’s more like eso. It’s a quest driven game. Now there are corrupted events in each zone that you can do at or around lvl 25 but they’re pretty laughable and i wouldn’t compare it to gw2 except in that they repeat.

So no end game, no open world content to make the world alive, and quest lines that actually don’t hold a candle to ESO. Damn it man, the game looks really pretty but I really need something to get excited about because PVP just isn’t going to cut it for me.

Yeah if you’re not even slightly into PVP, there isn’t much open world content to look forward to other than simply making it a career to become a crafter. I don’t know much about the group PVE content (i’ve seen some dungeons being advertised but i’m not high enough level).

I’d say if you’re enjoying the gameplay, play it until you don’t. If you start worrying about “what is the point?” then you’ll just find a reason to quit rather quickly.

Except it’s NOT like ESO, as the “quests” in NW aren’t anything more than…run all the way across the map to kill x or click x…just to run all the way back to get another quest to do more or less the same thing, repeated over and over again.

This is done without a real story or purpose attached. As basic and bare bones as you can get. Not even close to ESO’s quests.

I am very surprised they still stick with the old school “server XYZ” as your only home, instead of having shards that you can load into with your main avatar, if your clan shard is full, go solo for the session on a random shard, while you are in queue on your main shard and wait for a free slot.

Also, a server limit of 2000 seems very low, once again this should have been solved given the very large world (stream players in and out).

The game is designed around territory control and open world PVP in a seamless world. Sharding or instancing simply wouldn’t work under that design.

I got a refund on the first day, although I’d like another look later. For me the queues weren’t the direct problem, although they were ridiculous on the European servers, rather it was the fact that every time I got through a queue I got the “Unable to establish a connection to the server” error. Thus I was fast eroding my maximum 2 hours permitted play time for a refund without actually having been able to get into the game.