You’ve all seen those memes or Twitter threads that try to link celebrities or people to food items or other inanimate objects, but I’m not sure that there’s been anyone who has tried to link up MMO NPCs with muffins. Until now, that is.

Why am I doing this? Because it spawned from a random conversation in the MOP office chat, for one, but also because someone has to blaze this uncharted territory. Someone has to start these conversations, these arguments, these ideas. That someone is going to be me.

It’s high time that we all consider what sort of muffins these well-known MMO NPCs would be if they were indeed muffins.

Rytlock Brimstone is a cinnamon muffin

I don’t pretend to play a whole lot of Guild Wars 2, but I have played the game long enough to know that the Charr are the superior characters, both on the player character and NPC side. We need not look any further than Rytlock Brimstone, Tribune of the Blood Legion, big fluffy grumble cat, and I guess a guy who died but came back later with the ability to throw ghosts as weapons? I don’t know what happened here, actually.

Mercy is a lemon streusel muffin

Isn’t Mercy, like, an animated corpse or something? She has the ability to bring people back from the dead and can heal people with a big staff, so I don’t know that I should think too hard about her backstory, and so I am going to lean on the character’s color scheme and overall sunny disposition.

This leads me towards a lemon streusel muffin. Lemon treats are some of the best out there, often making your eyes open up wide as if you were – you guessed it – resurrected from the dead by some angel winged superheroic lich. Also, I bet that Mercy loves lemons.

Molag Bal is one truly evil dude. Anyone who is responsible for the majority of human suffering to the populace of ESO as well as the catalyst for those annoying anchors that popped up in the base game’s world deserves to be associated with an equally villainous muffin. 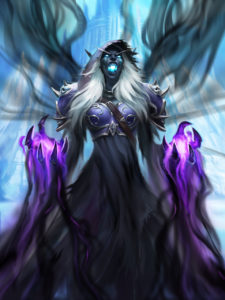 With that in mind, there’s no question that Molag Bal is a raisin bran muffin. Now I don’t have any problem with raisins or even with bran, but the combination is just so positively terrible and is generally served by people who hate you… and rest assured, Molag Bal hates you. In fact, he’d be the kind to claim that the raisins are chocolate chips, like a big jerk.

Sylvanas is a burnt muffin

This isn’t a Teldrassil joke, I promise. More like a general account of how dirty and just outright weird Sylvanas got done in WoW. Not only is she a burnt muffin, she’s a muffin that was slowly burnt. A muffin that could have been saved and stopped from being ruined but wasn’t. She is a muffin that, by all accounts and assumptions, was made by terrible bakers.

Y’shtola is a woman of class. A woman of refinement. A woman of knowledge. A woman who would not allow a basic muffin to cross her lips, let alone sit atop her breakfast or dessert plate. No, if she were indeed a muffin, she would be something that’s far fancier than the average muffin.

Once again, color scheme as well as flavor profile led me to the tuxedo chocolate chip muffin. Obviously, not all chocolate is created equal, so this muffin would have some truly fine, slightly bitter notes to it. Maybe something that has a little nuttiness to it. Y’shtola would have nothing less, I think.

Gandalf Stormcrow is an edible

Valkorion is a cranberry orange muffin

Valkorion is the only name that I remember from SWTOR’s Eternal Empire content updates; I’m struggling to put names to the other faces in that expansion. A character that memorable deserves an equally memorable muffin association, and that’s why he’s cranberry orange.

I have had my little muffin-loving mind blown by this muffin flavor. It stands out so much to me as a combination that I didn’t know was possible, let alone was so tasty, and Valkorion is similarly memorable and delicious (in my opinion). Also, this muffin kind of comes out of nowhere in terms of flavor, and since Valkorion likes to Force Ghost around out of nowhere, he gets to be this most surprising of muffins.

King Thirain is a vanilla muffin

I enjoy Lost Ark and even enjoy its pretty routine story simply because it’s trying so hard, and nowhere is that exemplified more than with King Thirain. He is just such a pure, bright, good boy that is trying so very hard to be the bestest and shiniest. So what muffin could possibly be similar to someone so basic while trying to show off at the same time?

Yep, vanilla. Vanilla is a wonderful flavor, and it’s used in a lot of baking recipes for a reason, but one can also agree that it has to try super hard to be memorable. Just like our glowy good guy Thirain here.

For those who aren’t familiar, Moyra is the armorsmith in Dauntless. She’s also a cheery, strong, and sweet sort of person. At least, she seems that way from her voice lines and some of her quest dialogue lines.

That combination of sweet and spice brought to mind the spiced apple muffin almost immediately. It’s affable, it’s sweet while also being zesty, it’s a muffin that can hit you hard when done right, and I’m pretty sure Moyra could hit hard if she wanted to. Seriously, the girl has some guns.

G’raha Tia is a cheeseburger

Yes, we’re doing another FFXIV NPC, and we’re highlighting MMORPG Gaming’s Best Cat, the inimitable G’raha Tia. He’s so pure and wonderful that he has actually transcended muffindom and is now a cheeseburger. He deserves this honor. He’s worked for this ascension. He is no mere mortal, no simple muffin. He can has cheeseburger, and now can become cheeseburger.

Also, I just wanted a reason to post that image of him blissing out on the burger.

Yes, it’s true! MassivelyOP is now Massively Overpawered, bringing you all the important MMO news you could ask for along with cute animal videos that have nothing to do with the news! Well, some of them might have something to do with it. MMOs add cute pets sometimes. The important thing is gawking at cute videos! Let’s focus on that instead of getting bogged down in details.