END_OF_DOCUMENT_TOKEN_TO_BE_REPLACED
Warframe has a very blood oriented frame in Garuda, so the vampire aspect is touched upon. But what about werewolves? Where’s a howling beast of fangs and (metallic) fur?

Fans have requested a wolf-themed frame but haven’t seen this desire realized… until now. The art panel of TennoCon 2022 unveiled the next frame in development, and it is all wolf!

And if that isn’t good enough news, Digital Extremes also shared that comic book artist Joe Madureira (aka Joe Mad) is working with DE to develop this frame.

In a special segment of the art panel with Madureira, he talked about his experience creating the frame’s concept. He told players that he loves monsters and was very excited to reinvent this theme into Warframe.

Madureira’s idea was to keep her lean, fast, and exuding the hunter essence. However, Lead Concept Artist Eric Vedder disclosed that the the art team was dissuaded from using claws prolifically as there are many claws already throughout the frames. Instead, her latest concept looks like she can bite her enemies from multiple points across her body. 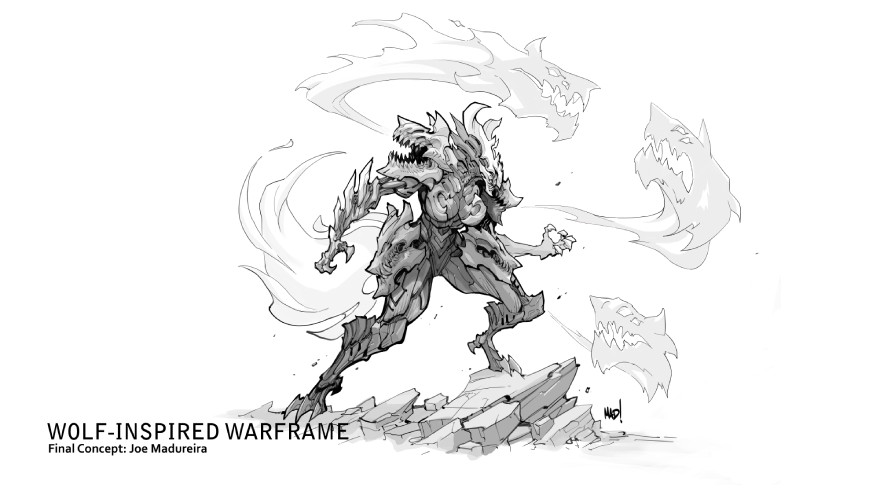 As exciting as a new wolf frame is, it wasn’t the only topic touched on during the art panel. Vedder, along with Art and Animation Director Geoff Crookes, Lead Concept Artist Eric Vedder, Associate Art Director Kary Black, and Community Manager Danielle Sokolowski, also highlighted a number of pieces of concept art, including a new demonic ram archon, a very sharp looking Titania Deluxe, and a special (spoiler!) skin of a certain someone you save in The New War that you’ll get with the Xaku deluxe set.

Fans were also treated to some mocap footage from The New War and a number of concepts from The Duviri Paradox throughout its development. We were further briefly introduced to Dominus Thrax, who will be a part of the new content, and a two-headed “dragon” being. Also unveiled was the amphitheater island where the in-game TennoLive presentation will happen live. Stay tuned for more!