The path of a paradox is not a straight line. At the close of the 2019 TennoLive broadcast, Warframe players saw their first glimpse of the Duviri Paradox. Back then, it was thought to be the next step Digital Extremes was taking after Empyrean. However, the path to this development zigged, zagged, and wandered about before the destination was finally in sight, ready to be highlighted at TennoCon 2022.

END_OF_DOCUMENT_TOKEN_TO_BE_REPLACED
As the main feature of this year’s TennoLive, the broadcast delved deeper into the Duviri Paradox. And later this year, Space Ninjas will get to personally experience this mostly monochrome and unique open world themselves, including finally getting to ride that mount seen in the first teaser trailer. Keep reading for the juicy details!

A world without color

Since the Plains of Eidolon, Warframe’s expansions consistently introduced open world areaa to adventure in. The upcoming Duviri Paradox is no different. However, there are some very distinct differences between the previous open world areas and this one. The most obvious difference of The Duviri Paradox is the lack of color! Yes, the adventure area is mostly monochrome (though players will discover that they will add color in certain ways). The reason for this lack of color is the crux of the story behind it.

Previous speculation about The Duviri paradox that included time travel was close but not quite right. Instead, it’s a time loop: a time-looped story that remains devoid of colors until the player. The visual environment is heavily influenced by negative shapes and fractals. As Director of Community and Live Operations Rebecca Ford said, “A paradox is an anomaly of time and space.”

How else does Diviri Paradox differ from other worlds? Art Director Mat Trembly said during the art panel that it is not a fully realized world. None of the regular trappings of Warframe’s other open worlds is present; fishing and mining systems are missing. (However, at the art panel we learned that fish were actually created in concept just in case they are needed in the future!) And Pablo Alonso, senior game designer, described Duviri Paradox as more of a guided experience than the more sandboxy do-what-you-want adventures players undertake in Eidolon and Fortuna. Here, there are is a specific story to solve; it has a beginning and an end. That doesn’t mean once you play it there is nothing left to experience, though. In fact, each time players load into The Duviri Paradox will be a newly created area to experience.

In total, there will be about one hour of gameplay in one run-through of The Duviri Paradox, which is a far cry (and welcome respite from) the long New War content that locked players into that storyline with no chance to diverge from it. Additional good news is that those who haven’t yet reached The New War won’t be locked away from this new content! As a time paradox, Duviri will be available separately without advanced mission requirements. 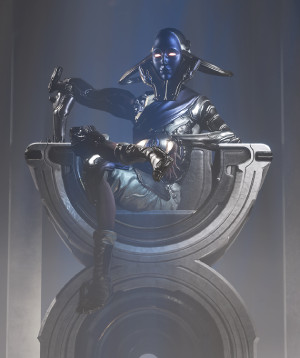 As with parts of The New War story arc, in The Duviri Paradox players will not be playing as a warframe or even their operator. Instead, they take on the life of one man, a drifter, who is trapped in a dream-like time loop as the plaything of the overlord of this space, Dominus Thrax. This Drifter is stuck in this nightmare as the sadistic being forces execution of the player as a traitor over and over and over… until a certain fortuitous encounter lands at the condemned’s feet and brings a bit of color to the world. This is the point when the player can work to break through this time loop and explore the different areas.

This also, of course, enrages Dominus Thrax, and any time players die in this adventure, the loop starts again. But at least the drifter knows he can now affect the world! And you can also unlock save points called shrines during each adventure so you don’t have to go to the absolute beginning each time.

While adventuring, players will explore areas, solve puzzles, venture into caves and islands, and build a deck of skills for that play session. At one point players will meet Teshin Dax, who can do little more than offer his weapon as he is forced to sit back and watch the Drifter over and over and over. The Drifter must break the cycle himself to be free. Oh, and yes, you’ll find a tie to the warframes themselves!

Introduced briefly in the art panel, Dominus Thrax was revealed as the mad king during TennoLive. He is the big baddy who delights in tormenting the player, starting the loop over every time he slams hand on his throne. He controls the entire environment of this area in the void, and it changes according to his mood. So instead of a mood ring, Dominus Thrax has a whole dimension. When this mad king is angry, the world gets more volatile; when he is calm from the pleasant singing of his muse, it is more peaceful. As his mood changes each time players log in, it will be a different experience running The Duviri Paradox.

Remember that Duviri Paradox picture long ago where we saw someone mounted on a horse? Soon, that person will be you! Players will be able to abscond with one of these war steeds called a Kaithe and use it to traverse The Duviri Paradox.

Besides looking cool, the Kaithe also has a special ability to leap over chasms, a very welcome skill for those who really miss bullet-jumping across divides when in drifter or operator form. Currently, the Kaithe can be used only in The Duviri Paradox, but there is a chance it can be used in other open areas later like the necromechs can. There will be different versions on release, but more customization will be coming later.  One version, has wings! A very necessary component when fighting an airborn dragon, no?