First off, I know I’m not the usual writer for Flameseeker Chronicles, and I’m not ousting Colin or Tina from their spot; in fact, Colin just delivered impressions of the The Battle for Lion’s Arch yesterday if you’re curious about the latest content release. However, I wanted to offer up some Guild Wars 2 thoughts that I had as a result of a little project I elected to take up a little while ago.

Back in July, I decided to make a return to Guild Wars 2 by way of leveling an Elementalist from 1 to 80, with the aim of seeing whether the class is as bad as assumed and whether the MMORPG would finally set its hooks in.

As of Friday, November 4th, I completed my journey and am now ready to share my results: I’m going so far as to say that the Elementalist class has single-handedly redeemed Guild Wars 2 for me.

I will admit that my initial few levels of the Elementalist class were shaky. I had started off assuming that switching elemental attunements was a pointless exercise at most or situational at least. I was building my way toward filling up the fire attunement and was burning things up so spectacularly quickly that it seemed like my assumptions were right. However, over the course of running around Tyria, taking on hearts, and doing the few bits of personal story quests I could stand before I got to the part when Logan Thackery started whining, I was beginning to appreciate how wrong I was – especially when I started to dig in more into the build UI. 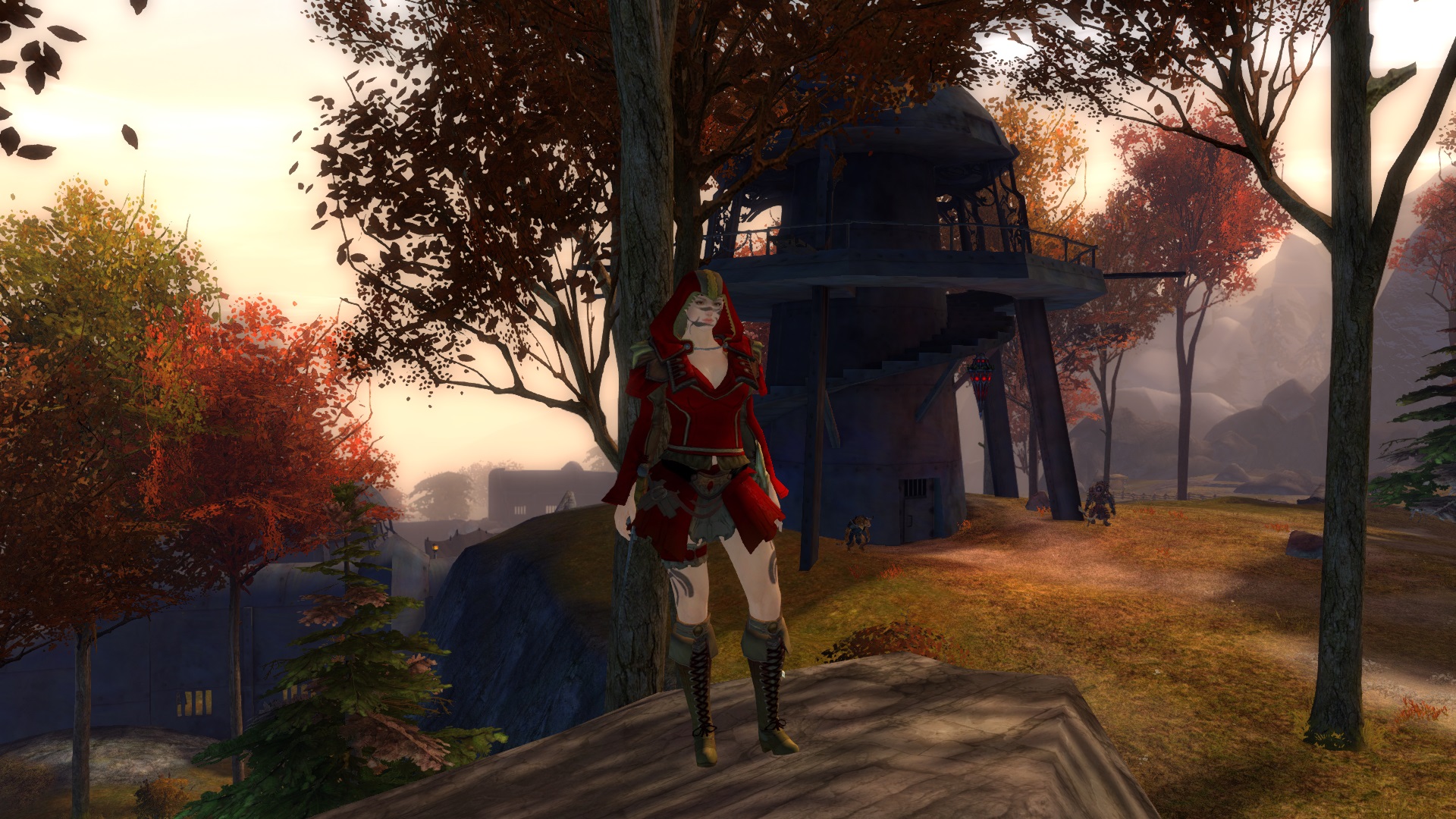 It’s not a big surprise that buildcraft is one of the major hooks of GW2, but for some reason that never really seemed to sink in for me before now. I had previously come up with a really good mace and shield-using Guardian build a few years ago, but I had also kind of assumed that I had “solved” the game and didn’t bother to continue the journey. Before then, I was playing a Warrior at launch and was so bored of the class, the story, and the build that I bounced off of the game for literally years.

However, the Elementalist forced me to pay attention after a few more levels into the pool. I got to some locations and world events that pretty much demanded that I start reading the traits and talents. I started to make myself learn muscle memory for switching out attunements. I started appreciating that moving to earth and then fire gave me some survivability and CC enough to burn down my foes. And then I started to get a better handle of water attunement healing. Then the value of air’s stuns. I fell into a weapon combo I enjoyed greatly – scepter main hand and dagger off-hand – read tooltips, experimented, tried, failed, tweaked, and tried some more.

After a few weeks, it was becoming clearer. I was understanding what these actives and passives were all about. I was appreciating the spec trees and their impact. I was becoming better at stance dancing more frequently. But most of all, I was having a great deal of fun, and that’s because while the Elementalist is absolutely a punishing profession, it is also highly rewarding when you work out its techniques. 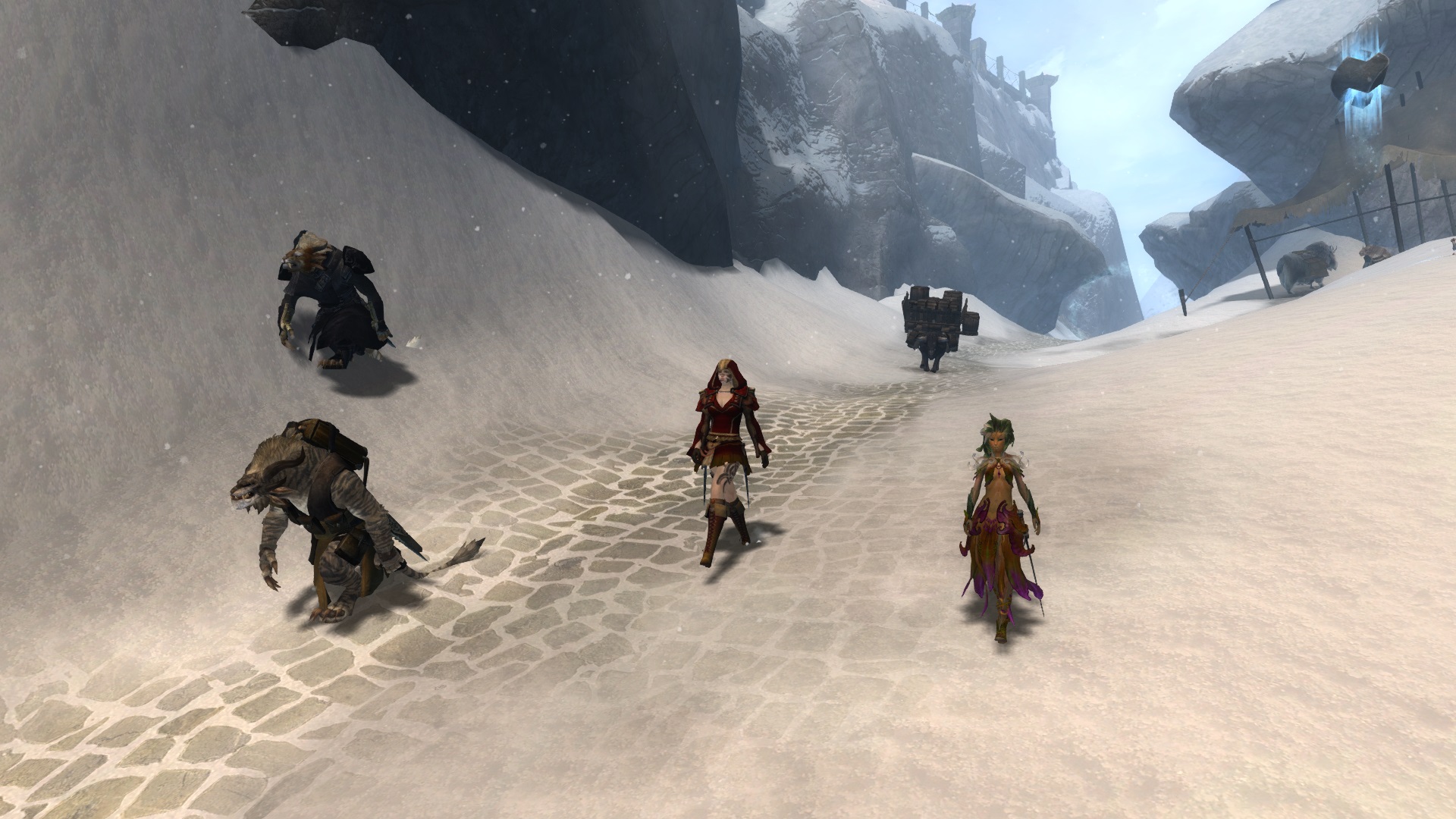 My main MMORPG for the foreseeable future is Final Fantasy XIV, a game where having masses of buttons to press is second nature, and I’ve come from other MMOs that had similar setups before then. Sure, I’ve played and enjoyed limited hotbar games like WildStar, but the things I’d experienced in GW2 before now felt a bit too simplistic and humdrum. Plus, I wasn’t really getting why these skills had such hilariously short effects. The Elementalist, by comparison, has a lot more buttons to hit because of its attunement mechanic, which both made me get into GW2’s combat more deeply and got me to realize that these short duration skills can have impact when they’re piled atop one another and buffed through traits.

I also remembered some good advice that I had received from a friend a long while ago: Think of GW2 skills less like abilities in MMORPGs but like abilities in MOBAs. That breakthrough as well as the complexity and depth of button presses I learned from swapping attunements not only made GW2 click for me but also made me focus, refine, and improve. 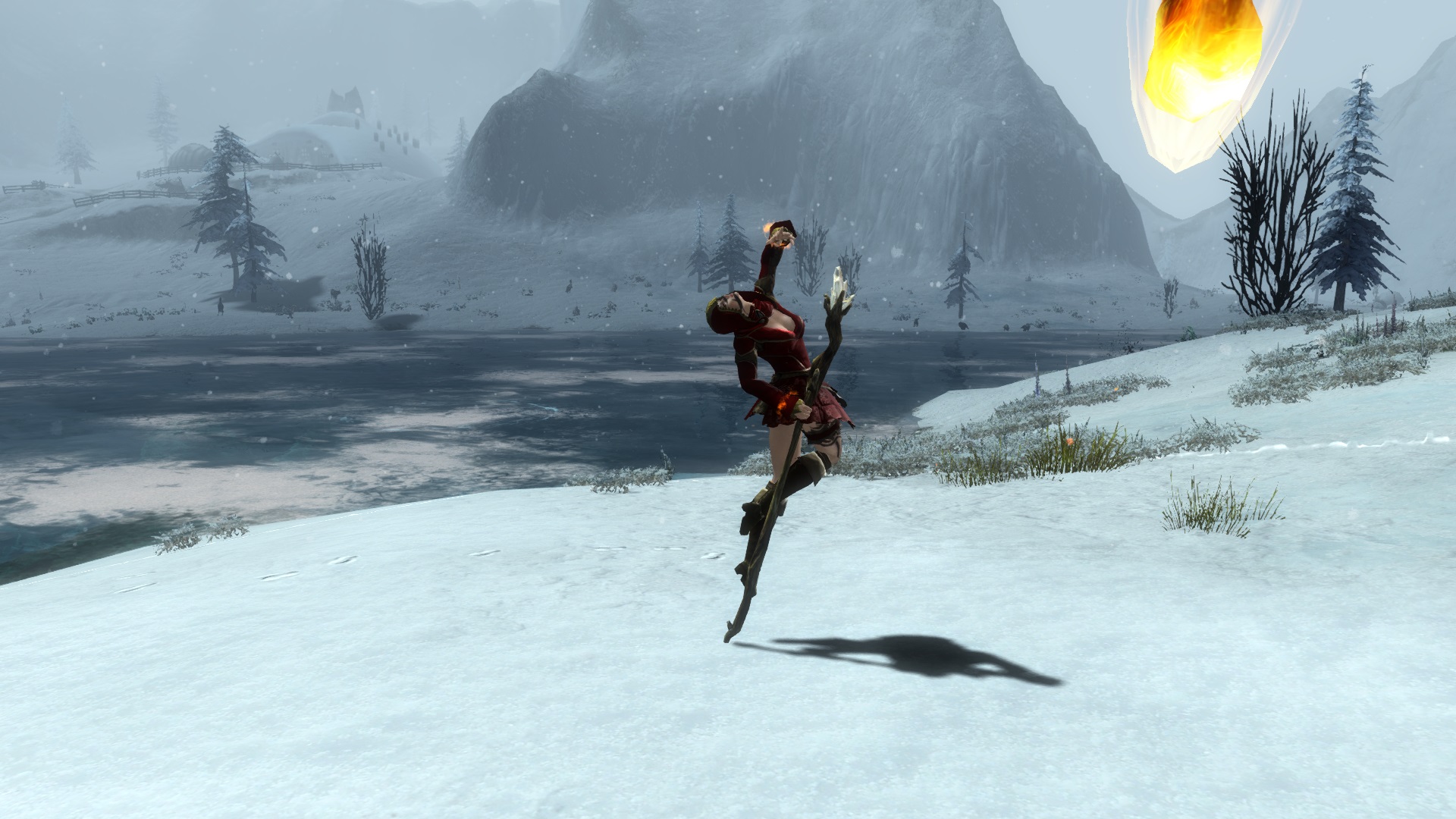 None of this is to suggest that the Elementalist is easy or misrepresented by what I perceive to be the popular line of thinking. This was all a lot to get through. However, the Elementalist isn’t bad, just highly misunderstood, and getting to that level of understanding and appreciation has, in turn, made my time in Tyria so much more enriching. This class’ form of trial by fire has forced me to get better at this game than I ever have been, opening my eyes to its myriad systems and buildcraft and way it does things.

And I have improved. Drastically. I’ve been validated a number of different times. I’ve surmounted challenges, bosses, and events that I previously would have assumed were impossible. I’ve been given a nod of approval from another player after we both took down an open world boss. I’ve been surrounded by more enemies than I was comfortable with but managed to fight my way to victory regardless. It has been validating.

Am I forced to hit more buttons than the player who has managed to build themselves out to be a two-hitter quitter? Yes. But I guarantee I’m having more fun than that guy is. 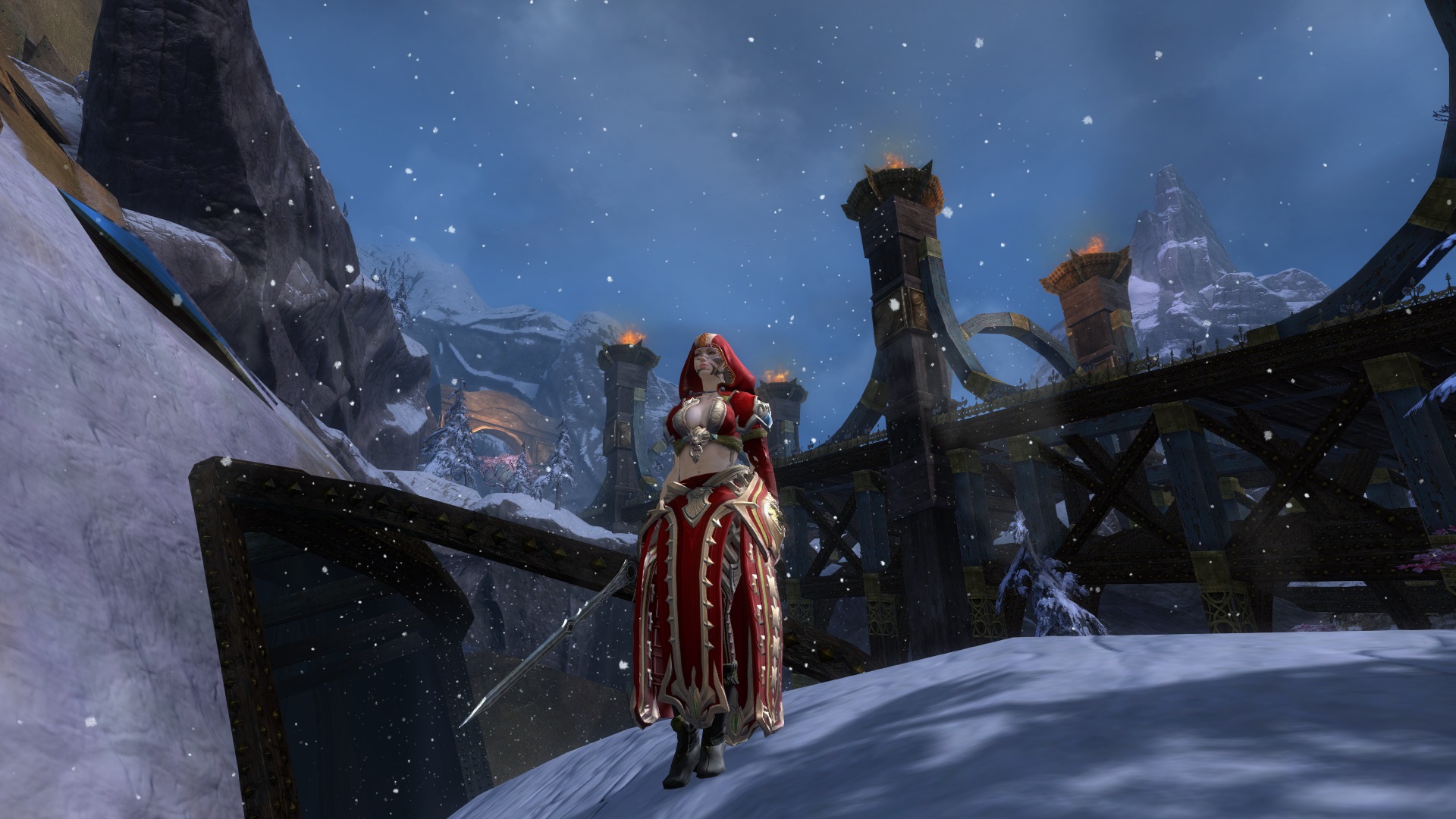 Of course, this isn’t exclusively due to my own ability or understanding. I’d be remiss if I didn’t also point out a huge variety of changes that have been applied in between the years I’ve been away from the game. The leveling curve feels a whole lot smoother, the achievements that grant huge injections of XP are game-changing, and the fact that I could hit cap through just running around and enjoying doing things in the open world areas all make an enormous difference. ArenaNet has made GW2 at base so much more fun to play than ever before, in my view.

Even so, I have to still pat myself on the back even just a little bit for getting through this project, and I cannot wait to experience even more. I can’t wait to check out the expansion stories. I can’t wait to do my first fractal. I can’t wait to slowly chase legendary or ascended gear. I can’t wait to see what the Weaver is all about, how it’ll scramble my brain, and eventually become another mountain to climb. I can’t wait to peek at the old dungeons that were added. Hell, I can’t wait to create an alt; maybe next time I’ll try out the Mesmer, the Guild Wars-est of all of the professions.

Thinking back to my first steps in July compared to now, I’m kind of laughing at myself for some of the braindead assumptions I had been led to believe about the Elementalist in specific and GW2 on the whole. I’m so glad I didn’t listen to those opinions. I’m so glad I pushed through. And I’m so glad to get to the top.