Back in December, film editor and author Jason Bailey wrote a piece on Flavorwire called How the Death of Mid-Budget Cinema Left a Generation of Iconic Filmmakers MIA. He spins a tale of the booming movie industry of the ’80s and ’90s, when mid-budget films were commercially feasible and commonplace. By the turn of the century, however, the movie industry had bisected itself; studios stopped committing resources to mid-budget films, “betting big on would-be blockbusters” instead and generating a hard-scrabble indie scene in their wake. As Bailey’s title suggests, that dramatic shift uprooted a generation of brilliant filmmakers and cheapened the art of films and filmmaking for everyone.

It’s no stretch to say we’re witnessing the same phenomenon in the world of MMORPGs.

Our Titanic; their WoW

Prior to 2005, mid-budget MMOs were common. We had a dozen or two of them, all contentedly putting out patches and expansions, surviving on modest playerbases (well under 500k, usually) and modest budgets. It wasn’t perfect, but we enjoyed options, variety, and stability.

World of Warcraft changed everything. Surprising even Blizzard itself, WoW capitalized on an increasingly online, increasingly global audience and bloated the playerbase expectations of gamers and the industry forever. For the last 10 years, we’ve mocked any MMO that doesn’t have millions of players (i.e., nearly all of them). We complain about “WoW clones” and then scoff at any game that does anything differently and yet can’t pull in the same numbers WoW does. What once was normal is now seen as risky and “niche.” Our standards shifted because of an outlier.

The movie industry had its very own WoW: 1997’s insipid “disaster romance” Titanic. Titanic’s $200 million budget was astonishing, two and a half times the cost of its studio Paramount’s second-highest film. And Titanic brought in over 2 billion gross revenue, nine times what its closest rival did. Like WoW, it exploded in part because it appealed to a global market and succeeded both domestically and overseas. Thus, the movie industry’s standards likewise shifted because of its own outlier; since then, Bailey explains, the average movie budget has spiraled out of control, almost doubling in the last two decades. Abandoning their previously diverse portfolios, large studios began chasing Titanic’s impossible dream. Paramount, for example, puts out fewer movies today than it did then, most for significantly more money. Mid-budget movies have simply been squeezed out. They might have turned modest profits, but the top studios won’t chance them, not when there’s a chance to make even more on something far more common-denominator.

We’ve watched studio after studio and publisher after publisher throw mountains of money at one MMO after another, each trying to make as much money as WoW by doing what it thinks WoW did and expecting (hoping!) it will work again.
Bailey calls the result “multiplex monotony,” and we’ve seen its effects in the MMO industry too. Warhammer Online. Age of Conan. Star Wars: The Old Republic. Elder Scrolls Online. WildStar. So it’s no surprise that the major themeparks showing on every screen are more or less the same; it’s what publishers believe will make the most money in the shortest amount of time. We’ve even witnessed the baffling sunsets of mid-budget MMOs that were by all accounts turning a profit. Single-minded return on investment has become the only goal. Portfolio diversity is over. MMO studios that diversify and invest in a range of titles — Trion, SOE/Daybreak — are punished in a world where pump-and-dump (or business model bait-and-switch) appears to be in a publisher’s short-term financial interests, whether we’re talking MMOs or video games in general.

It’s not that AAA studios have been averse to risk; it’s that they’re taking exactly one risk, over and over and over: WoW or bust. And when the result has been bust, they have become nervous about the MMO market on the whole, withdrawing entirely rather than being content to retreat to more reasonable mid-budget ventures.

Some exiled moviemakers are going indie, but Bailey’s sources suggest that the indie movie scene is itself suffering from overcrowding. While there are more indies being produced each year than the year before, they’re competing for an even smaller slice of the overall funding pie, meaning it’s never been a worse time to go indie. It’s simply not worth it for veteran directors to compete in that environment — “I have no desire to be a faux-underground filmmaker at 68 years old,” John Waters is quoted as saying — and so we all lose out on their expertise and vision.

How many high-profile developers has the MMO industry lost as a result of budget polarization and the global economic recession? Maybe we’re not as badly off as the movies just yet; Kickstarter has allowed the Richard Garriotts, Mark Jacobses, Chris Robertses, and David Brabens of the world to return to their craft. But most studios eke by on crowdfunding if they eke by at all. For every Camelot Unchained or Elite: Dangerous, there are a dozen Das Tals, Ascents, and Project Gorgons. Kickstarter is crowded too, and Kickstarter fatigue is palpable. In a world of $1 apps and Steam sales, indie game design can feel more like charity work or “portfolio building” than a serious career. And unlike filmmakers, MMO developers have no version of “cable TV” to turn to, no safe or respectable fallback, no easy path to make money while the industry recovers (though I imagine we could make cases for MOBAs, mobile, and board games). 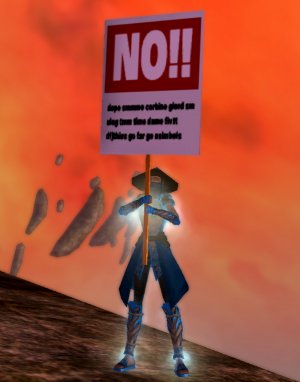 This polarization of movie budgets, Bailey argues, is partly a result of the inflated cost of marketing films. “In the modern, crowded multimedia landscape, the kind of saturation that makes [movie studios] feel comfortable — even when it’s promoting a giant tentpole blockbuster that everyone is fully aware of — is very, very expensive,” he notes. “Sometimes it’s 50 percent of the production budget, and sometimes it’s even more.” It’s hard to find comparable numbers for tight-lipped MMO studios, but one need only look at their fleets of PR and community staff, social media outreach, Blur Studio trailers, conspicuous TV commercials, and drenching of websites like ours in ads to realize that marketing is surely a huge slice of AAA games’ budgets.

Indie studios can’t emulate that and so don’t even try to compete on saturation, meaning they are free to focus most of their budget on the game itself. But mid-budget movies — and their MMO counterparts — are stranded between those extremes: too expensive to go indie, but not profitable enough to merit the attention of marketing-obsessed studio execs, and not “vertical” enough to be spun out into multiple monetizable properties beyond the film or MMO that is the core product. They’re just good movies, good games. And that is no longer enough.

Is the status quo sustainable? Bailey quotes Steven Spielberg’s assertion that we’re due for an “implosion where three or four or maybe even half a dozen of these mega-budgeted movies are going to go crashing into the ground, and that’s going to change the paradigm again.” Other sources argue that film studios are risking it all with their overreliance on foreign sales and specific genres (like the oversaturated superhero genre). No one seems to believe that the “new normal” for movies is going to last for long.

Maybe that won’t happen to MMOs. Maybe our bubble has already burst, which is why we see fewer AAA MMOs than we once did, never mind AA games. Or perhaps studios like Blizzard, which has already abandoned one expensive, incomplete MMO in favor of broader diversification, or Daybreak, which has already been forced to tighten its belt, are heading off the inevitable “implosion.”

Bailey ends his piece on a hopeful note.

Studio filmmaking may be on the verge of the point it reached in the mid-to-late 1960s, when a bad run of bloated, runaway productions, reflecting market calculation rather than vibrant storytelling, just about put the studios out of business. The movies only managed to save themselves because the suits handed over the car keys to young filmmakers with original stories to tell and a new way of telling them. That’s how the New Hollywood movement was born — less out of the inspiration of the new than the desperation of the old. And since it’s a cyclical business, that might be what saves the movies again: the urge to burn it all down and start over fresh.

MMO are cyclical too. The people running the MMORPG industry have been here for a long, long time. The “indie” hyper-successes on Kickstarter are veterans, too, and some of them helped create the problems we face now. As Justin and I discussed on this past week’s podcast, the next few years are shaping up to simulate the dawn of the genre, with the folks behind Ultima Online, EverQuest, Dark Age of Camelot, and even Shadowbane all lining up to take another shot at being the next big thing.

Maybe they can solve the industry’s problems. They certainly have tugged at the nostalgia heartstrings of this MMO vet. But maybe funding them is just prolonging our affliction. Maybe it’s time for the MMO industry to hand over the car keys.

The MMORPG genre might be “working as intended,” but it can be so much more. Join Massively Overpowered Editor-in-Chief Bree Royce in her Friday Working As Intended column for editorials about and meanderings through MMO design, ancient history, and wishful thinking. Armchair not included.
Advertisement