END_OF_DOCUMENT_TOKEN_TO_BE_REPLACED
Good morn-noon-ning (hell, I don’t know what timezone you’re in!) readers, and welcome along to another instalment of Flameseeker Chronicles! Be warned: This edition will focus on both the destruction of the old city and the rebirth of Lion’s Arch, so it will contain potential spoilers. I’d urge you to check out the city’s sights for yourself before proceeding.

I’ve been having a great time in Guild Wars 2 this week while I’ve been exploring the nooks and crannies of New Lion’s Arch. Rebuilding such an important commerce and cultural centre is no easy feat, so we’ve been waiting for quite a while to see the latest imagining of the city at the heart of Tyria. The wait is finally over, and I can’t wait to hear your opinions on the massive rebuild. I’ll give you my two cents alongside the rationale behind the city’s design and some context for those of you who need a refresher or who are jumping into Guild Wars 2 for the first time.

I don’t know about you, but I definitely find Lion’s Arch to be my favourite city in Tyria. No matter what race I play, I always find myself mapping across to Lion’s Arch whenever I need something. That’s not to say that I don’t appreciate Rata Sum’s ingenuity, the quaint comfort of Divinity’s Reach, Hoelbrak’s lofty lodgings, the organic roots of The Grove, and the tactical readiness of the Black Citadel. Each of the racial cities offers a wonderful insight into the history of its occupants that can’t be ignored by lorenuts, but Lion’s Arch puts all that together in a fantastic package through which we can explore the shared histories of Tyria’s races. 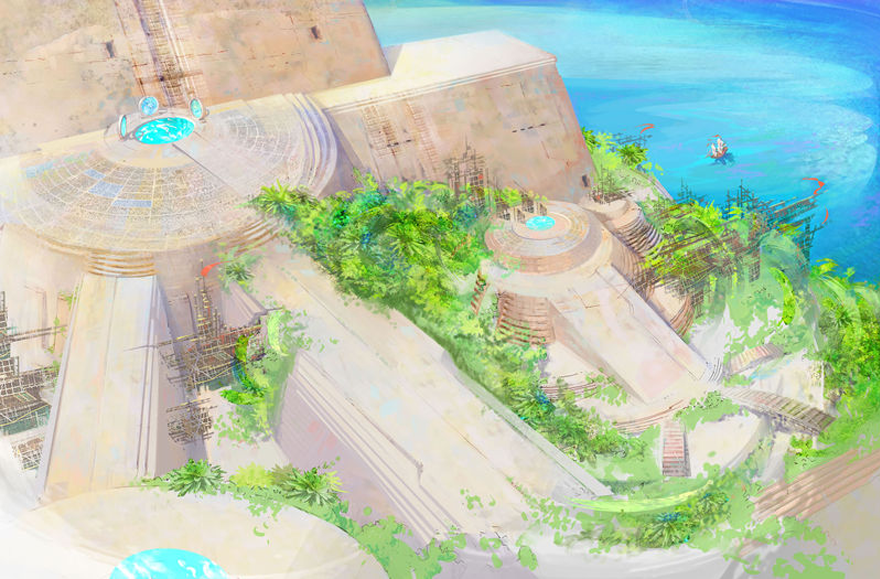 Lion’s Arch is geographically quite central, making it a very natural point of convergence for the major Tyrian players. The city capitalises on being such a major social hub quite well through its many unique offerings, not least of which is a well-networked set of Asura gates through which you can quickly navigate to all the happening places in Tyria.

The Mystic Junker — err, I mean… Forge — is a significant unique attraction that brings the playerbase to the melting pot city too. I enjoyed how neat that particular area became after the destruction of Lion’s Arch in terms of the locations of its new main attractions, and even I managed to find my way neatly between the bank, forge, and trading post at the last Sanctum Harbor. Why was the city broken apart in the first place, though? Was it just to create an exciting story, or was there something more to it?

Lion’s Arch was broken and reimagined out of necessity and also because of the impact the devastation would have on the playerbase, according to Massively alum Anatoli Ingram’s fantastic exploration of the redesign. Toli chatted with Environment Team Lead Dave Beetlestone, a creative wizard who was with ArenaNet when the original Lion’s Arch was created for Guild Wars. He explained that the old city’s unique place as a gathering of Tyria’s races in a rich cultural and economic centre gave it a strong resonance with the playerbase upon its destruction by Scarlet Briar. It made sense in terms of the virtual inhabitants too: If a racial city was chosen instead, members of the other races wouldn’t have felt the blow as hard. It could well have caused more guarded races such as the Charr to shut themselves off under heavy fortification, which could have proved ruinous.

I particularly enjoy how Scarlet Briar’s actions and the subsequent rebuilding effort help to hold the races united with a renewed vigour despite the Mordremoth terror. Scarlet attacked Lion’s Arch in order to drill into the leyline hub that she located below the old city, disrupting the magical flow of mysterious draconic energy in order to prematurely awaken her tormentor Mordremoth. The exploded wreckage of her drilling airship, the Breachmaker, presented great difficulty to those in charge of the rebuilding effort, with huge chunks of the metal presenting themselves as immovable blights on the landscape. It took ingenuity and a combined effort to restore the city to its previous splendour.

The threat of Mordremoth acts as a more long-term gel for the races of Tyria: Even though Scarlet was slain during her assault, she succeeded in rousing the dragon, leaving the world a much more dangerous place than it was before she started enacting her crazed plan. The rebuilding of Lion’s Arch presents the creative minds at ArenaNet with a fantastic way to visually and canonically present that to the player, and the rebuilding allows for a glimmer of hope that contrasts beautifully with the bleak situation in the Maguuma region.

The old Lion’s Arch, for those who have forgotten or who never got to see it, was a very quaint old-world nautical port with rambling sweeps and plenty of character. It was very problematic in terms of navigation, though, and I wasn’t alone in finding it a challenge to get around smoothly. It also didn’t have much in terms of fortification, leaving it tragically lethally exposed when attacked. The old city held plenty of interest, but it felt naïve when set against the dicey backdrop of the rest of Tyria. It was a very bold move to reroll the city, but I wholeheartedly back it.

My take on the new Lion’s Arch

I very nearly recorded a first look video to pop into this article, but I decided that the potential for high-pitched gushing and total incoherency was just too great to risk, so I went screenshot mad instead. I’ve put together a little gallery for your viewing pleasure, just in case you missed anything in your wanders through the port.

I really like what’s been done with Lion’s Arch, and I most definitely appreciated the reverence for the location’s long history in its new design. On my tour, I could find influences from almost every race: I spied some amazing fortifications that were no doubt Charr-approved, Asura-inspired modernity and fun seems to drive the city’s workings, and Sylvari plant-work flowed beautifully from the quaint human architecture. Even the guilds will be joining forces at the city’s Guild Initiative Headquarters, hammering home the point that the new Lion’s Arch fully embodies a united front against the Elder Dragons.

The new city somehow seems much more impressive in scale, offering wide expanses of communal space for roleplaying and events that definitely deserve a mention here. The city feels much livelier and more vibrant than ever before, and the music is absolutely superb at conveying the phoenix-rising overtones the ArenaNet team is going for. Little touches make it for me (the drillbit spiral lighthouse diving at Phoenix Roost made me squee), and I’ve loved some of the NPC encounters I’ve had as I’ve got to grips with the city. Quaggan tadpoles and lullabies, marriage arches, a live band, and even a fake Evon Gnashblade are some of the most fun exchanges I’ve encountered so far, and I’ve only just scratched the surface.

The new layout is most appreciated, especially when compared to the old city. The map has very clever, pretty, nautically themed markers throughout, so new players can be pointed towards what they are looking for by quoting these shapes in their directions. I know that I can head to the octopus for banking, for instance, which certainly helps to negate my poor map-reading ability. The Field of the Fallen is a stunning area that’s so very touching, especially with the circular curtain of falling water seemingly symbolising everlasting tears shed for those the city lost. Ahh, I love the little things like that!

I adore the new Lion’s Arch and the resilient hope of the joined Tyrian races that it represents. No one race alone could hope to quell the devastation caused by the rising of the Elder Dragons, but together the world’s inhabitants have the potential to fix the broken and triumph over the chaos that threatens them. What do you think? Would you change anything if you had the reins of ArenaNet for a day? Which city do you favour?

I’m still mourning the loss of all the good old RP spots and the Lost Grotto.  I don’t think I will ever be able to love this new Lion’s Arch.

Loving the new city. Reminds me of a kind of steampunk Mediterranean Mos Eisley. Very awesome.

Radfist BalsBigBrother Tina Lauro Nreff hehe I am the same with color and colour.  I am happy to make some accommodations but lets not get too carried away eh :-)

BalsBigBrother Tina Lauro Nreff I refuse to say Armor instead of Armour, even when playing on US servers.

I prefer the new one. The old one was interesting as a landmark, but not really functional or great as an actual city.

The new Lion’s Arch has quite a Limsa Lominsa vibe going on, I think – and that ain’t bad IMO.

I liked the one that was originally in game. Dont like that they got rid of it.

I love the aesthetics of new LA over pirate shanty town LA & burnt out wreckage LA.

However from a purely gameplay standpoint everything is so spread out ( Bank, Guild Stuff, TP, Mystic Toilet) that it is impractical. I think this was done because of server load concerns. or at least that’s what going around on the forums.

I like it OK, but I miss the quirky charm of pirate LA. I love the new JP, all the little details that ANet excels at, the lighthouse, and the neighborhoods. I really dislike the silly sealife-shaped structures and the echoing wasteland of the Grand Piazza.
Also, I want my lion fountain back!

BalsBigBrother Tina Lauro Nreff  I don’t personally have a clue where our audience comes from and I don’t know how we’d find out, but I agree that it’d be really cool to know! :D