END_OF_DOCUMENT_TOKEN_TO_BE_REPLACED
Star Wars: The Old Republic community, I listen to your podcasts and read your sites nearly everyday, but I realized that it’s been almost eight months since I’ve talked about you in this column. I personally believe that you are as important as the developers of SWTOR for keeping the game as awesome as it is. And I would like all of you to keep up the good work that you’re doing.

As SWTOR fans, I don’t think I have to mention to you the ones that I read and listen to all the time because they are likely the ones that you do, too: Dulfy, Bad Feeling Podcast, OotiniCast, and Vulkk. However, there is one rising star in SWTOR podcast world that I believe the rest of us who make SWTOR-related content can take a cue from. I’d like to introduce you to the Passionately Casual podcast.

Jessie and JT of the Passionately Casual podcast have no idea that I’m writing about them, but I’m going to do it anyway. That goes to show that I’m not talking about them for any kind of promotional purposes, but rather because I truly believe that they are doing something great. But more importantly, I believe that Jessie and JT are doing something that every podcaster can take note of and learn from.

The first time I heard about the Passionately Casual podcast was through JT’s other podcast, Corellian Run Radio, late last year. I must shamefully admit that when I first listened to their podcast, and I mostly wrote it off as a podcast that would center around the two SWTOR guilds they represent: Unholy Alliance and Wookiee Mistake. It wasn’t bad, but I didn’t think that I would be interested in listening to what they had to say.

Then episode 7 of the podcast featured an interview with the voice of Valkorion himself, Darin DePaul. My attention was piqued, and I listen to another full podcast from these appropriately named passionate podcasters. Then a couple of episodes later they interviewed my favorite theorycrafter, Oofalong, and one of my favorite livestreamers, Bored Brit. At that point, I think I was hooked. And I stopped listening to the podcast as an extension of the two SWTOR guilds and started listening to it as a legitimate SWTOR podcast full of news and interesting insights into the game that I was also interested in. 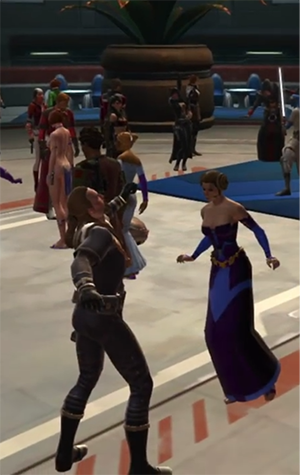 Are you still reading, SWTOR community?

Passionately Casual isn’t a highly produced podcast. In fact, one of the reasons I didn’t pay a whole lot of attention to it at first was because the production value of the sound can be mixed. I’m not a sound engineer, but I listen to a lot of voice actors, radio shows, and podcasts. I know what high-quality sound design sounds like. And this ain’t it.

Despite that, this lady and gentleman have something that other podcasts don’t: They have passion and a positive perspective on the game — something that is kind of missing at this point. I’m not saying that BioWare and SWTOR don’t deserve some of the hate that they are getting, but it’s good to hear a fresh, enthusiastic voice (or two) when the game is at a low point.

My raid team jokingly refers to me as one of the top 5% of players of SWTOR. And it’s funny because I do not see myself that way (nor do I actually believe that it’s true), and there are certainly many, many people still playing the game that are much better than I am in a lot of ways. However, I believe that the idea that I’m not the norm still applies. I play the game like an investigator and reporter. I’m attempting to be on top of the latest content, and even if I’m not personally living on the bleeding edge, I know where the bleeding edge is.

To those other podcasters and players on the bleeding edge of content: These guys are casual, social gamers. Sure, they raid; sure, they PvP. But they aren’t going to give you the latest and greatest information about the game’s best-in-slot gear. They aren’t going to tackle most appropriate boss strats or META for warzone maps. They are going to give you the perspective of what I believe is the new normal for SWTOR players.

On March 10th — the same day that Chapter 11: Disavowed released — Passionately Casual put together a roundtable of different members of the Star Wars: The Old Republic community. The guests included, ElionD of Shadowlands, DJRedd from the Harbinger Ootini guilds, Brian from the Shadowlands Bad Feeling guild, and DJ Lovechild and Major Vendetta from the Ebon Hawk Radio Free guild. During this roundtable, Jessie and JT wanted to demonstrate what was still great about the game and the community that played it.

Each of the guests on this particular podcast had created community events that encouraged utilizing the game’s content beyond what the developers gave us or taking what the developers did give us and made it better by creating community events from it. I don’t believe the intent of this roundtable was to point out how everyone else is doing something wrong, but rather, I think it was to point out that SWTOR still has a lot to offer if you know how to take advantage of it. And maybe this will encourage you to do something yourself.

SWTOR community, that’s the biggest takeaway from the Passionately Casual podcast. I’m not saying that we shouldn’t point out the flaws in the game; that’s the only way that things will improve. But if we continually focus on everything that the game and the developers are doing wrong, then we forget everything that they are are doing right.

We also have to remember that MMO developers shouldn’t have to spoon feed us everything. Perhaps in these days of themepark, guided corridor games, we forget that MMOs have always been what we make of them.