END_OF_DOCUMENT_TOKEN_TO_BE_REPLACED
Just over a year ago, the largest PvP conflict in gaming history kicked off in EVE Online as war erupted between the game’s most prominent territorial alliances. Over 60,000 pilots were initially drawn into the interstellar war that came to be known as World War Bee or The Casino War, and thousands of ex-players and newbies signed up during the war just to get involved. We followed the landmark battles and political twists of World War Bee intently for several months as it unfolded like a living work of science fiction. Our coverage ended with The Imperium, a large military coalition led by alliance Goonswarm Federation, being kicked out of its territory in the north of EVE and losing thousands of members and allies.

The story could have ended there as alliances often collapse following a major defeat (in what players affectionately refer to as a “failure cascade”), but the core of The Imperium stuck together and vowed to one day get revenge. The group has since managed to conquer and hold the lucrative Delve region in the south of EVE and has been farming resources en masse for months, rebuilding its war chest and waiting for an opportunity for revenge. It looks like that moment has now arrived, as the group has reportedly moved a huge fleet up north to a staging system within striking distance of its former home.

In this edition of EVE Evolved, I look at how the war brewing in the north of EVE got started and what shape it might take over the coming weeks. 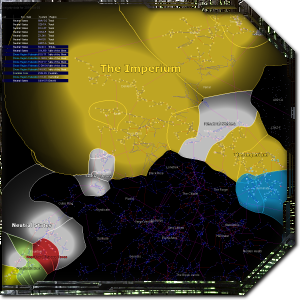 The story of World War Bee is like something out of a sci-fi novel, and if you haven’t read about it then I’d highly recommend reading through our previous coverage of the war. The conflict essentially started when the game’s largest and probably most hated military coalition, The Imperium, attempted to extort money from alliances in low-security space using the threat of invasion. The group attempted to curb-stomp an uncooperative lowsec target, but got a bloody nose for its trouble. That defeat served as a rallying cry to all of The Imperium’s past and present enemies, who quickly came out of the woodwork.

That’s when ultra-wealthy player Lenny Kravitz2 stepped in, using the trillions of ISK per month from his EVE gambling website to bankroll a full-scale war against The Imperium no matter the cost. The weeks that followed saw intense fighting, with key Imperium stations being conquered, all of its supercapital construction facilities being destroyed, and allies such as Circle of Two formally cutting ties. The Imperium eventually fled to an unconquerable NPC station in the low-security system of Saranen, where it was sieged for months while its territory in Deklein was slowly conquered. The Imperium’s plan at that time was to wait for its enemies to lose steam and then return and recapture lost territories, but the coalition has since established a home in the Delve region on the other side of the map. 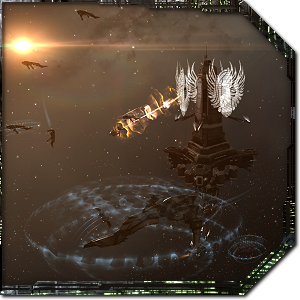 The war machine grinds into gear

If you’ve been following CCP’s monthly economic data dumps, you’ve probably seen the absurd amount of ISK being made from NPC bounties in Delve and the incredible amount of ore being mined there. Around eight to nine trillion ISK worth of ore has been mined in the region each month for most of this year, with another eight trillion or so in NPC bounties. The latest reports also show colossal negative export balances in the region of 27 to 45 trillion ISK each month, indicating that a ton of ships and resources are being imported into the region using that farmed ISK and more.

This level of organised farming should have been a warning to the rest of EVE that war was coming, especially from an alliance known for its industrial and logistics backbone. The sheer scale of farming even became such a worry that CCP has nerfed the mining capability of Rorquals and the NPC bounty farming potential of supercarriers, but it’s barely slowed the farmers down. Other alliances have also been constantly launching fleets into Delve with the hope of bagging a Rorqual kill or baiting a supercapital escalation, but even that hasn’t stopped the alliance war chest from growing rapidly. 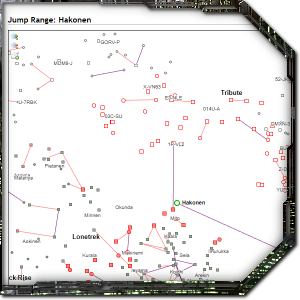 A call to arms

The inevitable call to arms finally went out last week when The Imperium announced it would be waging a campaign in the north of EVE. A fleet of around 1,000 Goonswarm capital ships soon moved across the map and docked up at NPC station in the low security system of Hakonen. This strategic staging location is within jump drive distance of parts of Tribute and Vale of the Silent, and the fact that it’s low-security space makes it very difficult to force anyone out of it.

The goal for pilots in this war isn’t to capture and hold territory but to “wreak as much misery as possible” on targets, in part by sending hordes of lone pilots to continually contest low-activity star systems so that the owner is forced to show up to defend. Many of the star systems in Tribute and Vale of the Silent have extremely low ADM (Activity Defense Multiplier) ratings and so will be very difficult for their owners to defend, while The Imperium has already maxed out the ADMs in much of its own territory in Delve by mining and farming heavily.

Even more interesting is that The Imperium is teaming up temporarily with former enemy TEST Alliance, which was already fighting the nearby Guardians of the Galaxy coalition but was getting its ass kicked by Pandemic Legion. Player Capri Sun KraftFoods has written up an excellent piece detailing the major players in this war and their motivations and goals, noting that the war is essentially about creating engaging PvP content for both The Imperium and TEST alliance members in addition to getting revenge. He also notes that this is the first real war since the introduction of Citadels, which came in at the end of World War Bee and have since popped up all over EVE. 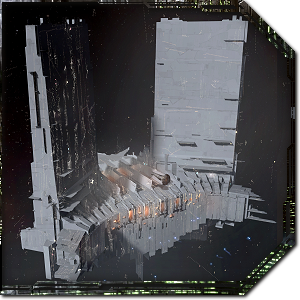 The Imperium interestingly left its supercapitals at home to help defend the Delve region in the south, bringing only regular capital ships up north for war. The coalition’s plan is to be highly aggressive with its capital ships and not worry about losing the ISK war on paper, relying instead on its huge industrial and farming base in Delve to replace lost ships quickly. That sounds good in theory, but losing the ISK war on paper can give the enemy a huge morale boost and a reasonable claim to victory even if they concede star systems and lose citadels.

It certainly hasn’t been smooth sailing for The Imperium at home so far, either. Capri Sun KraftFoods notes in his article that over 40 Rorquals have already been killed in Delve since the move, adding to the recent loss of a titan and now 13 supercarriers at the hands of Pandemic Legion. Committing to a war in the north of EVE may have left Delve a very tempting target for harassment in the south, and it remains to be seen if The Imperium can make any headway in the north while leaving its supercapitals at home. With the game’s largest and richest alliances involved, at the very least we can be sure that some very expensive stuff is going to explode.