Sci-fi MMO EVE Online has had no shortage of huge battles in its lifetime, from the world-record-breaking 3,110 player battle in 2010 to the Battle of Asakai in 2013 and the now-famous Bloodbath of B-R5RB in 2014, in which the equivalent of $310,000 USD of ships went up in smoke. There’s something about the stories of colossal battles, political dealings, underhanded scams and record-breaking heists in EVE Online that manages to grab the attention of the gaming world. People look on with a mixture of awe and schadenfreude as players in the world’s biggest sandbox MMO roll the dice and someone loses big-time.

New Eden has actually been pretty quiet for the past two years, but things began heating up recently when the largest military coalition (known as CFC or The Imperium) decided to invade low-security space. The CFC has largely been considered undefeatable due to the sheer number of ships it can bring to a fight, so when the group decided to capture valuable moons held by lowsec alliances, everyone expected only one outcome. What actually happened was a series of escalating events like something out of a really great sci-fi novel, and it’s led to the largest PvP war in gaming history, with over 60,000 players around the world choosing sides.

Read on for a brief overview of how the war started and a video update on how gaming’s largest war has gone so far. 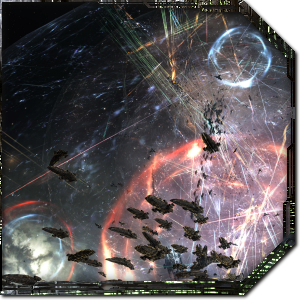 What triggered this massive war?

There are a lot of conflicting reports out there on exactly what led to this war between The Imperium and the Moneybadger Coalition (because EVE players are the best at naming things!). The Imperium has collected a lot of enemies over the years, but being the largest military organisation seemed to have made it all but invulnerable to defeat. The invasion of lowsec was the ultimate trigger point for this war, and it had an outcome that no-one could have expected — The Imperium lost big-time.

Lowsec alliances frequently fight amongst themselves over moons that produce a lot of ISK each month through the mining of valuable tech 2 minerals, but an enemy like The Imperium descending into their midst was too great a threat to continue their normal squabbles. The lowsec alliances put aside their differences to repel the invaders, forming a group they called Lowsec Voltron, and it turns out they were a force to be reckoned with. Lowsec Voltron decimated the Imperium forces and kicked them out of their space, but it didn’t end there. 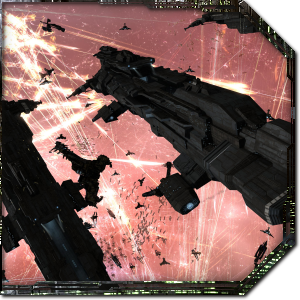 Revenge is a dish best served with frickin’ laser beams

It turns out that EVE gambling website IWantISK has some beef with Imperium member SpaceMonkey’s Alliance, and the incredibly wealthy gambling consortium has reportedly now decided to personally bankroll an ongoing war against The Imperium. The result was a group calling itself The Allies or the Moneybadger Coalition that now contains members of Lowsec Voltron and other Imperium enemies spurred on by seeing them getting absolutely destroyed by lowsec corps.

The war has had an interesting first few days, with a major battle taking place in the M-OEE8 system in the Tribute region — the home and staging system for Circle of Two, one of the largest alliances in The Imperium. An invading fleet of over 3,000 pilots poured into the M-OEE8 area and The Imperium reportedly sent only 1,300 to defend, additionally refusing to commit its valuable supercapital fleet. The attackers managed to win the battle and destroy the system’s infrastructure hub, and Circle of Two officially left The Imperium and took its 3,095 members with it. Reports suggest that CO2 announced its intention to leave the coalition toward the end of the five hour long battle, releasing a long prepared statement including the following:

“Over the past few months it has become increasingly clear that we have served (only) as a meatshield. Circle-Of-Two is NOT a meatshield. We will not stand as the wall that defends Deklein from the angry hordes for the benefit of Goons. We will no longer subject our pilots to the indecency of watching their hard work burn while Goons sit in their ivory tower. We will no longer stand as an unequal partner in The Imperium.”

This brings us to where we are today, with the Imperium losing a key member and the Moneybadger Coalition and allies winning a decisive early victory. The war is just getting started though, and there will be fights over other systems in the coming days and weeks. The propaganda mills are already in full swing, with each side spinning the narrative of the battle in M-OEE8 differently to its own troops and claiming the battle to be a partial victory. The Imperium also believes that the attack may have been a trap for its supercapital fleet, and that losing this battle has avoided an even more significant loss.

EVE‘s history is filled with examples of wars with surprise twists and unexpected outcomes, and the only thing we can be assured of is that this is going to be incredible to watch from the sidelines. Some of the alliances involved are even hiring newbies and returning players who want to get in on the action. Stay tuned to Massively Overpowered this Sunday when I’ll have a more in-depth look into the history of this war, the motivations of those involved, and more in the next edition of the bi-weekly EVE Evolved column.