That makes these jobs a little harder to talk about, because they’re not in the midst of any sort of perception shift. In at least one case, we have jobs that have basically just maintained their position in the game’s overall makeup across expansions, yet they haven’t seemed to change enough for people to really notice what they’re doing now. Are they good? Bad? Neutral? What’s going on with these jobs? Let’s talk about it. 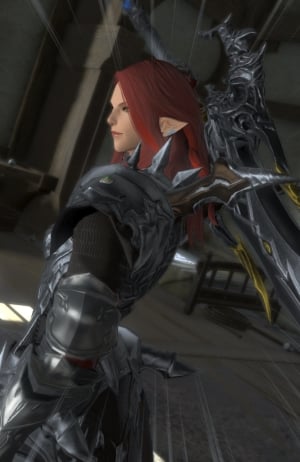 The biggest problem facing Dark Knight isn’t that it doesn’t work or has major mechanical failings; it’s that Blackblood, as a gauge, really changes once you have your level 70 ability. It goes from being something nice when you have it to being both plentiful and controllable in its deployment; that’s a little late in the game to suddenly get a major ability. But through all of that, Dark Knight remains a pretty solid tank, still offering what it always has while adding a few new wrinkles to resource management as you bleed and defend.

Dark Knight still is a much more “selfish” tank than Paladin, but Blackest Night does offer some group functionality and it has space to be useful as an off-tank as well. Ultimately, that’s enough to split the difference, making the job still a very capable tank without feeling as if it’s dropped in relative power like Warrior does. So it’s very much like it was in Heavensward.

“Wait a minute, Astrologian is probably the strongest healer in the game right now,” you protest. And it’s true! It even has more fun toys for being a healer, which I like. But it winds up in this category because perception of it has not changed in the least. You join a group as an Astrologian and people still look at the job the same as they did in Heavensward. It’s a great, flexible healer with lots of tools balanced by some randomness and lighter direct damage options.

That’s why it winds up here; because while White Mage has gone from “weak healer” to “great healing/DPS hybrid” and Scholar has wound up tumbling hard, Astrologian has remained more or less the same. At least the changes mean that Earthly Star has its full effects, which is a fun ability if one that doesn’t seem to exactly patch a major hole in the job’s ability layout. It’s fun dropping healing bombs, as it turns out.

I think we’re due for a little more revision on the job before we’re done, to be fair; two expansions is a long while to be situated as the most reliable healer. But perhaps that will change when we get more healing options.

Summoner is a prime example of a job that’s received as many huge positive changes as negative ones. On the plus side, suddenly you can summon Bahamut, you have new toys available, Ruin spam has more interesting things happen, and so forth. On the down side… fewer DoT effects, no more using Aetherflow abilities during Dreadwyrm Trance, and you have a flow now with much more exacting and punishing timing. Which one will dominate your feelings on the job depends a lot on how much you liked the job before and whether the flow or the cool elements are more important to you.

It’s definitely a job that suffers from a slower build-up phase that can easily be knocked askew by some mistaken timing, perhaps more than any other job. And just as with prior Summoner changes, it requires a rework of thinking about the job and what it’s supposed to be doing, which is also a problem. Hence how it winds up at the middle, splitting its time between “ugh, Summoner is such a mess right now” and “oh, guys, I get to summon Bahamut this time around!”

Ultimately, that makes the job more fun for clearing things where you know how everything works than for trying to do things that you’ve never attempted. Maybe it’ll be better once we get more egi glamour options.

Functionally, everything is peachy in Ninja-land. The job still parses well and provides the same group utility it always has; tools like True North make it easier to provide that group-wide damage buff, and diminished debuff management makes it easier to play efficiently. All well and good. If you don’t mind the sudden croaking appearance of Japanese mythology in the midst of your ability layouts, you’ll probably be happy with all of your new tools.

Are there problems? Well, yes, but they’re minor. Having your entire melee combo consist of the same two hits and a different finisher is a bit monotonous (fortunately, you’re doing a lot of other things as well). The Ninki gauge doesn’t feel great, chiefly because you aren’t doing much beyond waiting for it to fill. Shukuchi has more use now, but it’s still rather awkward as a movement tool. You still have Ninjutsu abilities that you never use sharing space with ones you use all the time, and even if it has a logical place within your flow Ten Chi Jin feels a little awkward in use.

As someone who’s been playing the job since its addition, I feel like it could just a bit more of a pass on the next expansion; we’ve currently got a number of buttons that are saddled without much in the way of interesting choices. (There’s only one way to use Duality, for example.) But where we are right now is what matters most, and it’s in a good place, so I can’t really complain.

More than perhaps any other job, Black Mage has benefited from the addition of the job gauges. The overall mechanics of the job were never insanely complex, but they required juggling a lot in your head at once; the job gauge simplifies it very slightly by tying Enochian into your usual elemental rotation, and everything else follows naturally. It’s easier than ever before to understand what you’re supposed to be doing and how that will impact your overall pattern, and while you’ve still got some build-up to worry about it’s reliant much less upon long cooldowns.

Beyond that? It’s more or less the same job it’s always been. Cast a big spell and make something go boom. For all the arcane nonsense that goes into that, it’s remarkably straightforward.

Some Black Mages are not going to be as fond of the losses of precise timing and weaving that was maintaining a proper Enochian buff before, but at this point I think that’s sort of the wrong hill to die upon; the job has become more playable, which is ultimately a good thing. Freeze still feels a bit irrelevant and there’s still some weirdness with the job, but it’s ultimately received a mostly functional update that makes it easier to understand in play. So that’s all good.

Feedback, like always, is welcome in the comments or via mail to eliot@massivelyop.com. Next week, well, it’s anniversary time once again; let’s do what we always do for the game’s anniversary. No, not the drinking party.

Hm. I would have probably put Warrior here and Dark Knight in the bad. The idea of giving such a huge gamechanger at the end of the levelling spree, and the fact that mitigation wise, Dark Knight lost some potent tools, and it is considered the weakest of the three jobs in the raiding scene. The only upside is that shield really is a less selfish mode of attack. A great OT tool to cast on your MT on a big hit to give yourself a Bloodspiller.

The biggest problem as well is that Bloodspiller is such an odd attack. Most tanks kinda want to get out of their tank stance in order to DPS. Dark Knights want to get out for their mana management asap. DRK suffers a lot of mana issues due to the change in Blood Price. It’s a bit odd in how it feels, honestly. The thing with Bloodspiller is this: The potency added, which was calculated, without Grit on is as potent as Syphon Strike or Souleater. So it’s just a third attack thrown in there for…what?

It just feels really disjointed as an idea and doesn’t seem to be flow properly.

Having gotten all three to 70, I wanna say it goes PLD > WAR > DRK in terms of mitigation, damage and overall feel. I don’t know why but it really isn’t a fun feeling when you have the same health of a Paladin but less mitigation in the sense you don’t have a shield nor as many defensive cooldowns.

Otherwise, can’t speak for the rest of the classes so I would defer to Eliot on that. Always curious and fun to see other people’s opinions.

I’m not sure AST is middle of the road now, but it certainly wasn’t before the 50% nerf to The Balance that recently happened. Before that, most groups healer priorities in Stormblood were “AST, and then whatever”.

That’s much less of a factor now except at the very top end (where WHM is pretty strong).

I just want to mention that FINAL FANTASY® XI: Ultimate Collection Seekers Edition is on sale for $10 on steam right now. That’s 11, not 14.

Uggh, no thanks. Too boring and looks like crap. Go through 900 menus just to attack.

The Daily Grind: Walking in MMOs – or running?