END_OF_DOCUMENT_TOKEN_TO_BE_REPLACED
On my server in Star Wars: The Old Republic, there are more guild advertisements than chatter in the general channel on the starter planets and fleet. This can quickly become overwhelming to those who don’t know what to look for. I have actually seen these advertisements turn people away from joining a guild altogether. The SWTOR population has also fluctuated quite a bit, so it’s difficult to find a guild that is active and has been in the game for an extended period of time. In other words, general chat is flooded with advertisements for guilds that aren’t very old. In fact, there are many who advertise needing a person or two to help start a guild.

If you are returning to SWTOR or maybe jumping in for the very first time, you are going to want to find a good guild. It’s possible to play the game without interaction with other people, but you will not really get the full experience until you join up to play the game with like-minded individuals.

My advice on finding a guild will avoid some of the obvious questions: Are they friendly, do they have regular events, and do they fit your playstyle? Instead, I would like to focus on the questions that are a little outside-the-box but are just as important if you want to find a guild that actually makes you want to stay in the game instead of flee it.

Is there a strong second-in-command?

I’ve often been a part of guilds where there is one guy or gal who is the go-to person for everything. There is a common thread even among the officers of some guilds where they feel they have to defer to the guild leader to answer questions or get permission to do something. However, to be an effective leader of a guild, a GM has to be a leader of leaders. If the guild leader does not or cannot impart the vision of the guild onto the officers or at very least a strong second-in-command, then there is no way the other guild members are going to grasp what’s happening either.

Another side effect of a guild not having a strong second is leadership burnout. A guild leader who takes on everything will quickly lose interest because of the overwhelming responsibility of handling other players’ fun. It can even be tough for two people, but if a guild leader doesn’t have at least one person in his or her support system, then there is no way the guild will last very long. And that will quickly become a burden for the leader and everyone else in the guild as well. 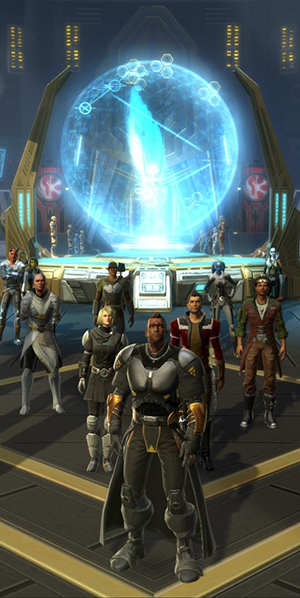 Does the guild focus on more than one kind of activity?

I believe that every guild needs to have focus, and hopefully, that focus appeals to your playstyle. I don’t think that I have to tell you that if you are a roleplayer, you should find a roleplay guild, or if you’re a raider, you need to find a guild that does operations. But in many cases, that is what the guild does on “event night,” and if that is all the guild does, then much of the guild will log in on event night – and then not log in again until the next event. So ask them: What do they do between events?

It’s possible that a guild will build on a theme. For instance, if it is a raiding guild, there might be a couple of serious raiding nights and a couple of other nights with different raiding themes. (A fun thing that I’ve seen is when people were required to take a drink every time the group wiped or a member said a certain common word.) Don’t expect guilds to hit all the major activities in an MMORPG, but do expect them to do more than one thing.

Is there an application or interview process?

Some guilds like to do this in game; some like to have a website that is used to filter members. However guilds do it, it doesn’t really matter; what is important is that they have some way to vet their membership. Of course, the vetting process is more important in some guilds over others. Regardless, it’s important that everyone in the guild has an opportunity to make sure that the guild is a good fit for them.

The interview process is a great place to ask questions and to find out if the guild matches your expectations. Perhaps the guild requires that its members participate in one activity or another, or maybe it’s a roleplay guild and requires a character sheet. The interview or application process is the time to find out that information.

Does it use Discord?

Personally, I think it’s important for every guild to have some form of communication outside of the game, and I’d argue that right now, more than forums, more than a website, and more than any other VOIP program, Discord provides the best place for that communication. No, this is not a Discord sponsored article, but I do believe that right now, this service provides a better communication platform than a website or a strict VOIP program like Mumble can. It doesn’t matter whether you use the optional voice service or not; what’s critical is that a guild has a robust, yet accessible, way to communicate with its members when they are not in game. Right now, I can’t think of a better way of doing it than Discord.

Lastly, the guild has to be active, but let’s be honest, it’s more than that. There are guilds that have members on almost 24 hours a day, but if they don’t communicate with each other, then is it really active? I mentioned VOIP before: If the guild is inactive in guild chat but is constantly talking in Discord, maybe that’s not a good fit for you if you’re not a VOIP person. Maybe the guild is only active between 11 p.m. to 2 a.m. and you work at 6 a.m. That’s clearly not a good fit for you. Are people active only when the guild leader is active? That’s not necessarily a good sign either. The bottom line is that it’s not important how much the guild is active but rather how it is active and when.

If you have any other outside-the-box advice for finding a guild that fits you, I’d like to read it in the comments below. You can also check out our Guild Chat column for more advice on MMORPG guilds from our guild columnist Tina! I will see you next week.