END_OF_DOCUMENT_TOKEN_TO_BE_REPLACED
Hello Samhain my old friend! It’s so good to see you again. It’s been such a long year, and so much has… wait, where is the rest of you?!

Break out your pumpkin masks and vampire fangs: Samhain has started! My favorite time of the year has arrived in my favorite game. It’s a bit of a mixed good news/bad news thing, however. With the conversion to Secret World Legends, I didn’t doubt that the Halloween festival would take place this year, but I was unsure whether we could get new content for the holiday. After all, much had to be reworked for the relaunch, and some things would likely need to be (and were!) reworked on the various Samhain missions. What I didn’t quite expect was not getting all the previous content!

Still, it is Samhain, so amid my disappointment over what is missing, I am glad over what we do have. I am happy new folks can get a small taste of Halloween in SWL (even as I mourn what a tiny taste it is). And I can definitely appreciate that this taste was made more readily available to everyone in game, allowing all the chance to fully participate. And participate you should! Samhain is here for only a limited time, so jump in and enjoy it before it poofs into the night on October 31st. Without getting too spoiler-y with step-by-step instructions, I hereby present a look at this year’s event, the first ever for SWL.

There can be only one

It appears the devs’ declaration of returning all previous content from The Secret World ASAP didn’t apply to holiday content. Only the first ever Samhain event, The Cat God, made it into SWL. This is so disappointing. We’ve been telling people about the awesomeness of Halloween in the game and how these holiday missions are the best content ever! Now that SWL is free-to-play, there are a number of new folks playing who are eager and finally able to see what it is we’ve been prattling on about for so long. And they aren’t even getting the best of it.

For years, I noted that each successive Samhain event topped the previous: Spooky Stories was even more impressive than The Cat God, then The Broadcast, overshadowed the stories, and then The Seven Silences left them all in the dust. (2016’s The Rider Cometh was good too, just not the level of these.) And no one has the opportunity to do them, potentially for years. That disappoints me greatly, and it saddens me that people do not get that experience this year — if ever? I am sad that I do not get to experience them again this year, and I already know them!

That said, I can understand why the last two, The Broadcast and The Seven Silences, were left out. In order for the first Halloween to be more accessible for the population (which trust me, you really, really want accessibility for a holiday event or you get very grumpy players!), some changes needed to be made. Those two had missions needed either access to Tokyo or for the full story line through Transylvania to be finished to fully appreciate or complete. Those goals may not be reasonable for the new crowd that the game is bringing in. Instead, you need something that that the majority can do so they can become enamored with the seasonal event, and that means focusing on Solomon Island. That is just what Funcom did, so get ready for the feels with Andy’s kittens.

To make Samhain 2017 more accessible, Funcom altered The Cat God a bit so that everything could be accomplished on Solomon Island. This is fantastic! With the new zone restrictions being tied to level and main story progress, there are regions that many characters cannot access — mine included! Before, we used to be able to meet up on folks or enter a zone and run through to the next even if not quite the appropriate level. That is impossible now. For the first time ever my own alts will be unable to collect the lore because I have not advanced them far enough in the story; I’m doing one faction at a time and I refuse to rush.

So yes, I am so pleased that the changes made the mission accessible to nearly every one. Players only need to have access to Blue Mountain, which is fairly easy, in order to participate. This should clue TSW vets in that they can’t complete the mission from muscle memory, as Egypt and Transylvania used to be involved. I appreciate that some changes were made because it brought an air of newness to the event; I was forced to go back and reconsider a clue because I just tried to do it like before. I loved that! I am not even put off by the fact the investigation mission was made easier with more clues, seeing as I feel holiday events should be the most accessible. Understandably, as an investigation mission The Meowling could have been a huge put off for those who don’t find it fun to really puzzle out the most obscure clues.

All that said, I have no idea why devs did not also include Spooky Stories, which is phenomenal! It, too, is based solely in Solomon Island and fits firmly with the idea of keeping the event accessible. And let’s be honest, it would be a major hook of awesomeness for the game! While it’s probably highly unlikely, I can hope that this is added in as a bonus event to extend it. (I mean, why are we ending on Halloween? We should go at least a day or two more!) 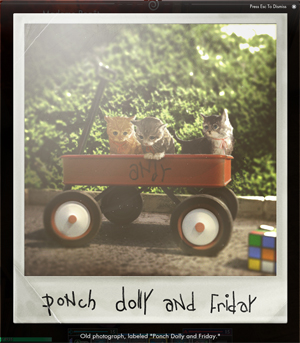 I’m not going to walk you through the mission, but I will get you started! Spoilers will be clearly indicated. To begin the mission, you listen to the voicemail left by Madam Roget by clicking the envelope icon in bottom, right hand corner of screen. Then you travel to Kingsmouth and talk to her to pick up the quest. The first Quest is The Meowling, and it will lead to The Cat God.

The quest will involve all of Solomon Island, so do be sure you get far enough in the main storyline to access up to Blue Mountain. Now if you just barely made it to the zone, there is a chance that one or two parts of the puzzle will be a complete mystery, so I will provide a couple spoiler hints.

There is also a Super Jack raid in Secret World Legends, but it is different from what TSW players are used to. Instead of summoning SJ in Kingsmouth’s Wispwood using various carved pumpkins, you’ll undertake a 40-man raid in Agartha available to everyone every hour on the hour. Just jump to the main tree and look to your left at the portal with all the decorations. The instance decoration is neat, mirroring the tree in Wispwood. SJ is easier to kill than Flappy was, but he shares a similar mechanic with the filth bird: When you see the platform turn orange, hide behind the tree or be punted off and/or killed!

Let’s get loot and lore!

Yay! Samhain lore! Samhain loot! And it is all pretty darn accessible to everyone. Lore wise, anyone who can complete the mission chain can find all the pieces. In fact, players will trip over all but one just in the course of doing the missions. Collecting them all grants the achievement Harvester of Horrors.

As for loot, you get it from a variety of places. You get a reward from doing the missions (including a pet), from defeating the Cat God in the instance, and from defeating Super Jack in the raid. Fun fact: Those candies you get from the raid bag aren’t worthless! be sure to eat one of everything as each type of candy consumed grants an achievement. 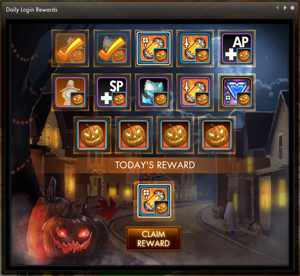 There are also daily gifts you get for just clicking accept after logging in; they include a mysterious Jack-o’-lantern that works just as the relic did during The Whispering Tide. When you defeat a Super Jack, you get a 10-minute buff that will allow you to open one pumpkin and get the goods from that special loot table. Also as in the Flappy event, items are granted in order, so if a character already has that number’s item, it moves on to the next.

Unfortunately, this list is incomplete as I am creating it as I get items. Also, since I had many items already, friends are helping to fill in the blanks when mine skips ahead. Here’s the list so far:

As in The Whispering Tide, you can collect each daily pumpkin in your inventory and open them when you have more time to do the raid, you just have to do one Super Jack raid per pumpkin. Please note that only the character that collects the daily log in reward gets that item or the Jack-o’-lantern’s items when opened; they are not account-wide.

Additionally, there are special seasonal items that can be purchased during the event only, You will find these in the dressing room and pet/sprint window with a special pumpkin icon.