END_OF_DOCUMENT_TOKEN_TO_BE_REPLACED
I love the Bartle Taxonomy; it’s been around for a long time, and it’s still relevant today. This is why when I am given an MMORPG to judge, I will measure the game’s content against the taxonomy. Star Wars: The Old Republic has been my game for years, and I continue to play it nearly every day, even this year. I’ve been in constant touch with its community, and I don’t believe there is a part of the game I have not played in some fashion. How does it measure up this year to the Bartle Taxonomy?

The Bartle Taxonomy divides players into four categories that pull from two axes: the worlds-vs.-player axis and the acting-vs.-interacting axis. Crossing these two axes create for quadrants called Socializer, Achiever, Killer, and Explorer. A balanced MMORPG will sit right in the middle of these four quadrants. I have given SWTOR letter grades based on how I thought the game performed in those categories this year.

I have a confession: I did not think that SWTOR would do well in the social area. However, the new group-finder, and believe it or not, the server merges actually helped the game turn things in the right direction. I don’t think I’ve seen the servers this packed since the launch of the game. I understand that there are actually fewer players in the game now, but those who do play can find and see each other. The other night, there were seven instances of Nar Shadaa. That planet didn’t get that packed during the last Night Life Event.

Of course, I didn’t give socializing an A because things are far from perfect. The server merges were good for getting people together, but it pushed communities together that didn’t belong on the same server. For instance, roleplayers and those who hate roleplayers now have to share the same server. And many people lost character names they have held for years.

Despite some of the issues, some social groups, like those who run the Starforge Enjin site, have thrived. At the last Guild Services party, I counted over 60 people trying to occupy the area in front of the stage at the Slippery Slopes during a dance party. I was impressed. 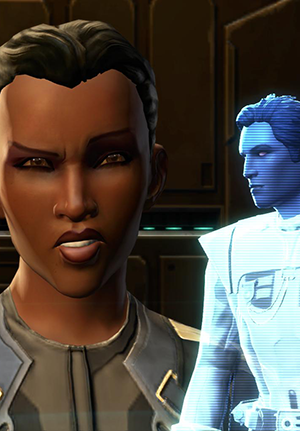 The biggest issue for the Achiever category is Command Rank. Achievers like to fill up bars, but even they have limits when it comes to how grindy the achievement is. The grind isn’t as bad as some past games have made them. As far I know, we don’t have legitimate players running macros just to gain CXP like we have in older games. And the rewards of CXP are achievable through other means, this means, that if you aren’t looking to just fill up bars, you can still get the benefits. From my understanding of Achievers, they prefer to reach goals that few people have.

Of course, there are always achievements in new flashpoints and PvP zones, but BioWare has switched things up a little bit by making certain rewards available only through doing specific flashpoints. For example, the Chiss armor set that most of the Copero NPCs are wearing is available in game, but only from boss drops in the Copero flashpoint. Although that isn’t an achievement that people can see by exploring your achievement list, it is an achievement that you can wear as you play through other parts of the game.

Not much has been done over the years for PvPers and other competitors in SWTOR. In fact, most PvP vets will tell you that all the good PvPers left a long time ago. However, I know that PvP is still one of the most popular things to do in SWTOR, and even activities like Galactic Starfighter have picked up in recent months. I believe that this is in direct relation to the new zones that BioWare introduced this year. The Iokath starfighter map and the Yavin ground-PvP zone have renewed interest in the PvP game.

I don’t think that SWTOR‘s PvP is balanced; I don’t think that it’s ever been. However, it’s one of the more balanced PvP systems in an MMORPG. I also think that even if it was 100% balanced that PvPers would be happy or call it balanced. It’s also very easy to learn, so more people are in it. Combine those factors with a new zone or two based on a known ruleset, then you have a wonderful way to increase the overall PvP activity.

I can’t give it an A because open-world PvP is lax and still not a lot of fun, and for some reason, it’s still difficult to encourage people to PvP in ranked competition. Also, the same couple of classes still seem to be on top of the leaderboards every time, so the balance issues are evident. But that doesn’t stop PvP from being fun for most people, and the new zones keep things interesting.

Even though I believe that Copero is a beautiful flashpoint and highly detailed, it only serves to remind us just how impossible it is to explore anything in this game. I would give SWTOR an F for exploration if there weren’t already some interesting places to explore and if there weren’t little Easter eggs planted in Copero.

I do have high expectations for Explorers since is it one of my favorite activities in MMORPGs, so the score might be skewed low. But I don’t think that is an excuse for SWTOR doing so badly in that regard.

I don’t think SWTOR is in a terrible place right now. It’s definitely not in a great place, but many of these scores have gone up for me in the last part of this year. There have been some major missteps, especially at the beginning of the year, but as I said in the mid-term report, Producer Keith Kanneg is doing some wonderful things with the game, and his communication with the players is on point.

But I want to read your thoughts. Where do you rank SWTOR‘s additions this year on a Bartle scale? How are they different from mine? Most importantly, I want to know why your scores are different. Let me know in the comments, and I will see you next year.

I haven’t agreed with a lot you’ve written about the game over the last year but this is right on the money for me.

Writing a reasonable and balanced article: A

SWTOR is still a decent game, although nowhere near what it’s potential could have been. I just started tinkering around again after a year away and I’m really just rolling new alts and playing the original stories now.

It will be interesting to see how Keith starts moving things along.

TY for all your SWTOR efforts these many years. Since ’11, on the Interwebs – here, Reddit, forums – I expect comments to be quite negative and was surprised and pleased this seemed reasonable and was hopeful that you had the scores trending up as the year ended.

Speaking as an avid casual PvPer, I’m not at all interested in ranked because arenas are simply no fun for me. I enjoy the objective-based warzones much more, even though it’s a fully random hit or miss depending on your team composition. Which I find funny, since when I was starting out with the game I longed for a pure-combat PvP mode without objectives (absolutely hated Huttball), but with time I have completely reversed my original position on the matter.

Otherwise… the whole KOTFE/KOTET story/quest format is what mostly drove me away from the game. I liked it as it was before, that was the game that drew and kept me in, the new format was something completely different which hasn’t enthused me in the slightest. On the other side, Galactic Command is a great idea in principle but with extremely poor execution which has only recently came into a passable state. Things do seem to be going in a better direction now and I would love to be optimistic, but it’s hard to shake the feeling of an inescapable downward spiral.

That ranked only happens in Arenas is the biggest drawback for SWTOR’s pvp, imo.

Thanks for posting, I enjoyed the read and agree with much of what you said. I think maybe you were a tad hard on it as regards exploration, though I do agree it is no where near as good in that respect as say GW2.

Anyway, I’ve returned to SWTOR after an absence of nearly a year and for the most part am enjoying it, and in fact it feels much like a reunion with an old friend. Glad to see they are giving at least a little love to Starfighters; something they seemed to abandon for a long time. Further, yeah, it is really nice to see all the people around. It definitely feels alive.

As always my biggest complaint is that with the KOTFE launch they made the open world PVE and story content a bit too easy. Before KOTFE the bosses would talk the talk and usually back it up with a moderately challenging fight, now they go down for the count in well under a minute.

That said, I still maintain after all this time that what SWTOR does best (at least with everything up through Shadow of Revan) is the engaging storytelling that somehow makes me feel special and ‘the chosen one’ even though I know I am not. ;) And of course it all feels like classic Star Wars with all the RP possibilities associated with it.