It is true that the Hi-Rez Expo has wrapped up for 2018, and we’ll need to wait another 12 months to attend the next one. (Folks should be over the effects of the after party by then!) There’s just something awesome about getting to gather with tons of fans in one place as well speaking with devs face-to-face. Every year has been cool, but this year has something a little extra: Founder and CEO Erez Goren attended and mingled, answering questions and sharing his love for gaming.

Goren hasn’t given many public interviews in years, but between the dev roundtable with President Stew Chisam and bumping into him on the show floor and chatting with him individually, I got to learn a number of fun facts about the philosophy and workings of the studio from the tip top man himself. And it is true, everything did come from Global Agenda! 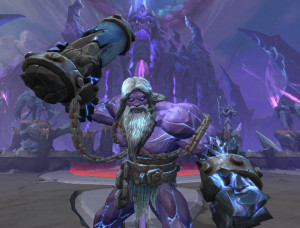 Where it all began

Ever wonder why Hi-Rez Studios is like it is? If you’ve ever wondered about the formation and direction of the studio, you need look no further than the founder, Erez Goren. The studio came directly from Goren’s love of gaming. During the keynote address, Chisam described the beginnings: “I still remember the day back in 2005 when Erez, our CEO, told me that he wanted to start a gaming studio.” He went on to note that he worked for Goren in the businessman’s very successful software company. “He’s probably the only CEO I’ve ever met that spent eight hours a day playing City of Heroes. […] Gaming always was and always has been Erez’s passion.”

CoH wasn’t the only game that provided inspiration. During the roundtable Goren described his gaming history as fragmented, starting with Asteroids and other arcade games in one phase, then fighting games like Mortal Combat in the second. Next up were games like Populous and then Age of Empires Conquerors, but he felt he came too late to that to get good at it. And then his first MMO, CoH. Goren admitted that although he loved the game, the inability to aim in CoH actually drove him crazy. And from that, the idea for the first game was born.

“Global Agenda came out of the fact that I couldn’t aim in City of Heroes. I tried to make something that was similar to CoH but with aiming, then expanded the scope to have all the features of WoW. That might have been a little much. Those MMOs plus Team Fortress led to [GA].”

There was the idea, and now for the company. Chisam said, “Erez wanted to do for gaming what his other company had done for business software, and that is to create an constantly evolving series of games that would live for years built up around a community of passionate fans.” So Hi-Rez was born.

Where it is now

When Chisam joined Goren’s team in 2008, he noticed how much it had already grown and the talent that had already been brought on board. The team then released Global Agenda in 2010, a game that not only still has fans but has been a building block of ever subsequent Hi-Rez title. I’ve heard it in one form or another from many of the devs, and Goren corroborated that by stating, “Every game that we’ve made since then has been some sort of a derivative of a Global Agenda mode. And I’m not kidding. And we still have another 10 games to make.”

“Every game that we’ve made since then has been some sort of a derivative of a Global Agenda mode.” Hi-Rez’s Erez Goren
I found that last comment interesting, particularly a specific number. Was it meant as an example, or are there 10 more possible titles waiting in the wings? I wonder what they are? I have also heard from different devs at both the last expo and this one that the company always has many projects in various stages of development all the time. One of the reasons for that is just because Goren wants more games. He explained, “The exciting part to me is really just the opportunity to make more games. I tend to be a little fidgety:  I want to see a lot of different games and I want to try a lot of different things. So I’d like to have as many game projects going as possible.” He said he wants more games and more game modes (such as Paladins: Battlegrounds). Goren then added that it was Chisam’s job to rein that in at the same time.

On the subject of game projects, many ideas will actually never get to the public while others might be shelved for a time and retooled (like Bot Smashers). Ideas that are ready for public input are then introduced even if the game is not in a ready state yet. Chisam noted, “Our philosophy is generally to be a highly transparent development studio, so we tend to may be put things publicly a little earlier. But we do have a series of basically green lighting games.”

Goren added, “If we think something is far enough along, and it is fun enough and we want to get a lot of feedback on it, that’s when we tend to show it.” Internal testing, he explained, can only get the team so far; you need feedback from outside the company — feedback that isn’t tainted. Sometimes the feedback, coupled with other factors like the market, mean that even a game that has been introduced can be shelved again. “We showed some things last year, some which we kept going with [Hand of the Gods], some which we didn’t [SMITE Rivals],” Goren said. As for the fate of Rivals, he stated, “We didn’t feel like it had what it needed to have to really become a good hit.”

In regard to the state of the studio, Chisam shared that there are around 400 employees now, not counting contractors (which would add another 50 or so). At last year’s expo, that number was just a hair over 300. And that is all growth from an employee roster of just 50-60 at the end of 2012. Chisam also said that the company is finding more leaders within its ranks, and the focus is on building more leaders this way. Rory Newbourg was cited as example of starting out as an analyst at the desk and is now leading a small team in development of a game. “When we find good leaders and talent, we try to grow it and make sure those people have ways to shine,” he said

Where it is going

Goren noted that the company is more than just a single game, and it is not pigeonholed into any particular genre. He emphasized,

“In general as a company, we’re more interested in making games that are fun than anything else. We don’t want to restrict ourselves to just one thing or another; we’re not just a pure shooter company, or a pure anything else. If we think something is going to be a lot of fun to play, then we’re going to try to make something along those lines.”

He then shared that one idea behind making Bot Smashers was actually to give Hi-Rez players something quick and fun to do while they wait five minutes to get into a ranked queue, which is a reason for wanting to get the game on PC and other platforms. Goren is a big fan of cross platform play, and he wants to push that more in the games going forward.

Speaking of other platforms, we got a little hint about the future. When asked whether Hi-Rez plans to expand to the Nintendo Switch, Chisam said, “So my PR answer is, ‘We have not confirmed anything yet.'” But when he looked to Goren seated beside him, Goren replied, “Maybe. Maybe yes. Yes. I didn’t say which games though.” Hmm, games, plural.

Knowing that so many different games are being explored — and not all of them needing to be tied to the SMITE or Paladins IPs — I can’t help but wonder what games may make it further into development. Could there be a RPG style game in Hi-Rez’s future? Never say never, but don’t hold your breath. Goren answered,

“I would never say no, but it’s definitely not where our expertise is. If we have any expertise, it’s in player versus player type games, so it is a lot more unlikely for us to come up with a story-based game. It’s also something I don’t tend to play as much, so probably there’s some reflection off of that as well. That’s not to say that we won’t. Even if we did more of a RPG type of game lets say, then we would have more of a co-op type of game, but not really a story-based game. I’m sure if we did a co-op type of game then we’ll have speed runs or something that you can still measure your competitive level, and even have some kind of e-sports around that. Pure story? Most likely not.”

Even without a full-on RPG, the games of Hi-Rez’s future could take many forms. maybe there will be some RPG elements within one. Each game will likely contain familiar elements (and of course somehow still tied to Global Agenda!). Even in titles that come along without ties to the studio’s currently known IPs, the game would have a special Hi-Rez flavor to it. Goren said,

“We try to always put our own spin on games. Whether the community believes it or not, most of the time all games are iterations of other games in some format. I don’t think there are any pure creative thoughts that you can’t find in any game right now. Take any game you know that’s extremely popular and you can trace the roots back to something else. All the games are kind of iterations with some creative input into it.”