It turns out that not only were players excited to jump into the role of pirates-to-be for Sea of Thieves’ closed beta last month, but even more people were eager to watch them do it.

According to an infographic boasting about the CBT’s big numbers, the closed beta included 332,052 pirates, treasure hunters, and buccaneers. Collectively, that group clocked in over two million hours of playtime.

Rare noted that the game topped out as the #1 title on Twitch with the most live viewers. With 25,563 players streaming and posting their content and an average of 104,240 viewers during that period, Rare calculated that nearly 14.5 million hours of the closed beta were viewed by fans.

Sea of Thieves has a little over a month and a half to go before it launches on March 20th for both Xbox One and PC. Get a bit more hyped for this title by watching a brief video below on its distinctive art style! 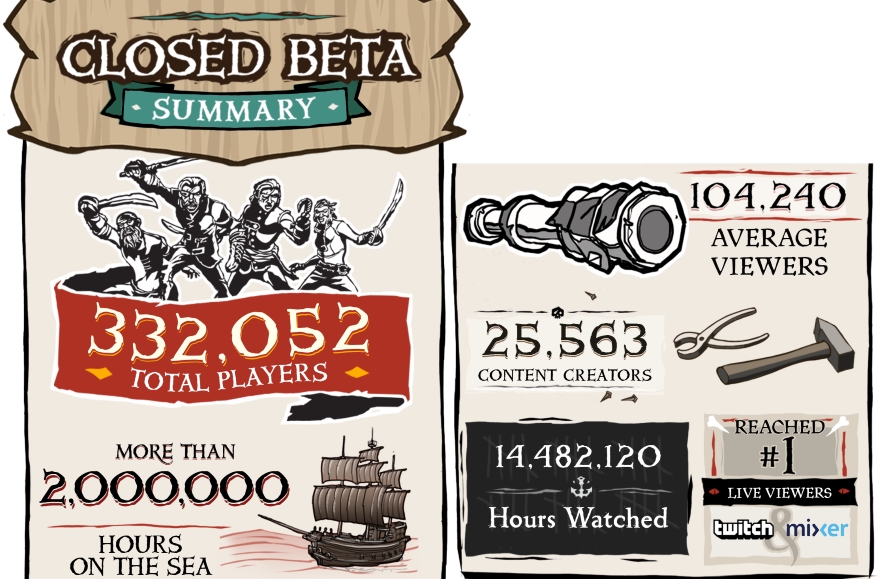 Anyone that has played this for more than a few hours that can tell us if it’s any fun beyond the initial hype for PC specifically? I know it was made for consoles, and this makes me Leary of playing it on a PC…

I’m curious what the long term fun factor will be. Tired of buying into games, and them only lasting a few weeks before everyone leaves… :(

They’re doing some special for beta so they don’t pre-spoil content/lore. I don’t think this beta is going to produce an accurate answer for your question. I’d recommend waiting 30 days past launch to see what people are saying then.

I wanted to try this, but every time I attempted to even *start* the program, it wouldn’t even start. It showed the splash image for a brief moment and then disappeared. No booty for me. :(

Fun game but that xbox ap on pc and lack of push to talk options makes this a pass for me.

I’ve been playing for quite a while as part of the Insider Program and it’s been fun watching it slowly grow.
It’s a cracker of a game and I really hope it can launch strong, because it really needs a strong launch.

If you find an entertaining YouTuber with a group of people, it’s interesting to watch – but that’s largely on the personalities and if you enjoy them. The game mechanically is interesting.

However, it seems that it’s not a solo-friendly game; in fact, it seems solo-antagonistic. I couldn’t imagine trying to do anything interesting except “Flee, always” if you didn’t have a regular group of friends.

I watch a bunch of streams. The only cool thing about this game is the water. Looked legit! Everything else was MEH

*looks at screenshot with narrowed eyes* LeChuck? You again?

i played about six hours and i’d say the biggest headache was having to use xbox app party chat with my xbone friend which it didn’t have push to talk which my guild generally has a semi relaxed push to talk rule in voice comms for exactlyy the reason that became apparent with my xbone playing friend’s mic being open and his music and tv and kid in the background. tho his conversations with his kid were actually pretty lol.

that being said actually grouping up with xbone user friends is easy as pie so that’s nice. tho larning where stuff is in the xbox app to add people to your list is a bit odd just as it’s a different app with different sensibilities than one may be used to as a winpc gamer.

the otherhurdle ofc was using in game voice with randoms as we did the beta with only 3 in group often relying on randoms to fill out the 4th spot which often they didn’t listen to comms even when we used them and rarely talked at all as it was. often leaving fairly quickly especially as we ignored one objective to go to another first instead sort of deal.

i’ll just leave this nice footage here for anyone that has missed it so far that is interested in seeing us try to avoid an agressive crew on our tails and reiterate that i feel this is a game that will be less enjoyable if on tries to play it like an mmo or “full time” so to say and seems best with a group of friends for an hour or two a couple times a week type deal.

I think you nailed it right here. Once people accept that this is a session-based multiplayer/co-op pirate game, the smoother the adoption of the game will be among the community. That being said, i do wish they add more things to actually do in the game, as that’s my main stumbling block at this point.

ye i don’t think what it’s going to launch with will be really worth a full $60 upfront, but i’mbuying anyway because i do really like what’s there despite that.

but i think the pill would go down smoother if it was even just $50usd.

That be a HARRRDY number of folks.

The Daily Grind: What MMO should a true MMO newbie try in 2020?

The MOP Up: And the new name for Life Beyond’s planet...

XLGAMES and Gamigo say paid DLC will make up for ‘deficiencies’...