END_OF_DOCUMENT_TOKEN_TO_BE_REPLACED
Massively OP is at GDC 2018 this year, and like Hearthstone, we’re kicking things off with a bang: with monster hunting! No, not the dino-esque kind Matt and I have been doing, but the kind Gilneas are doing in HS‘s upcoming expansion, The Witchwood. I got to sit down and talk with Lead Mission Designer Dave Kosak and Associate Designer Dean Ayala about the new expansion, RNG, and more.

What the Witchwood brings

First, the best part: Just logging in after Witchwood launches grants you not only three free packs, but a random legendary card as well. In fact, we’ve seen a few new cards and card mechanics in the past week or so. The Rush mechanic, essentially Charge without letting creatures attack players on their first turn, isn’t exactly new, and I was told it wouldn’t be retroactively added to any cards, including the warrior move “Charge,” which essentially just adds Rush to a creature. Echo is kind of cool, allowing the player to cast an Echo card as many times as they can afford that turn. And then there are the Worgen cards, which switch their attack and HP each turn add some flexibility to your decks depending on what you need. The latter two feel more interesting for an old CCG fan like yours truly since those are the kinds of things that are hard to do in a physical CCG.

These all sound fun, but for those who are lucky enough to receive them from packs (or via crafting or as a random new-expansion legendary bonus), the new legendaries Genn Greymane and Baku the Mooneater really mix things up. Just by having them in your deck and respecting their limitations, you start the game with a cheaper or enhanced hero power. As a former player, I think it’s nice to see Blizz understanding that powerful legendaries that ask you to build a deck around them are painful, so giving you the benefit from the start helps a lot. But man, it’s a stricter feeling requirement than the previous “no doubles” cards we’ve seen in the past.

We’ve seen that Blizzard has come up with some cool ideas for decks on their own based on these limitations. Ayala noted that the Warrior, Paladin, and Hunter decks they discussed felt quite powerful. No one said “overpowered,” but those were the ones I had in mind when I asked about balancing concerns. That being said, the devs aren’t just looking to potentially nerf cards and decks that seem over the top. If, say, even-based mage decks proved popular but underwhelming, the devs might toss them a bone in a future expansion. As The Witchwood is the first new expansion of 2018, that means player feedback has an opportunity to help shape these deck types for the rest of the year.

With Hearthstone’s Kobolds update, the players saw rogue-like adventures in CCG form. The HS team adds in mechanics and playstyles based on not just CCGs but games in general, including World of Warcraft itself. With Dungeon Crawl Stonesoup being a game many on the design team enjoy, adding a rogue-like element seemed obvious.

And it’s happening again. As the team has seen a lot of people still playing doing Dungeon Runs, it’s decided to add another version for Witchwood. The Kobold-themed dungeon runs will still around, but Witchwood’s Monster Hunt will be a new addition, with a few tweaks. The devs didn’t want to give too many details since the mode won’t come out until two weeks after Witchwood is live, but here are the details I gleaned: First, there will be several hunters thematically tied to current classes, like warriors and hunters, but with their own unique class powers. They’ll act as a kind of storytelling mechanic to help give the expansion its flavor, kind of like Adventures sets or The Lich King scenario we’ve previously seen.

And second, to go with our hunters, we’ll have a nemesis for each hunter. Unlike with the Kobold runs, your end boss won’t be randomized by exclusive to your hunter. This allows you to get to know them through each encounter so you can better understand how to defeat them. It’s an interesting choice, especially for someone who cut his or her teeth on physical CCGs and mostly only experienced CCG stories from flavor text and related novels. While new mechanics are fun, they don’t quite flesh out an expansion in the same way as giving us heroes and villains that interact with each other.

Although I really miss adventures being content updates or at least the big single-player draw, the devs said that the rogue-likes won’t be constant single-player meat. They want to surprise and delight each expansion, so Monster Hunt is just the current flavor Blizz is trying. It could be adventures next expansion, or something totally different! 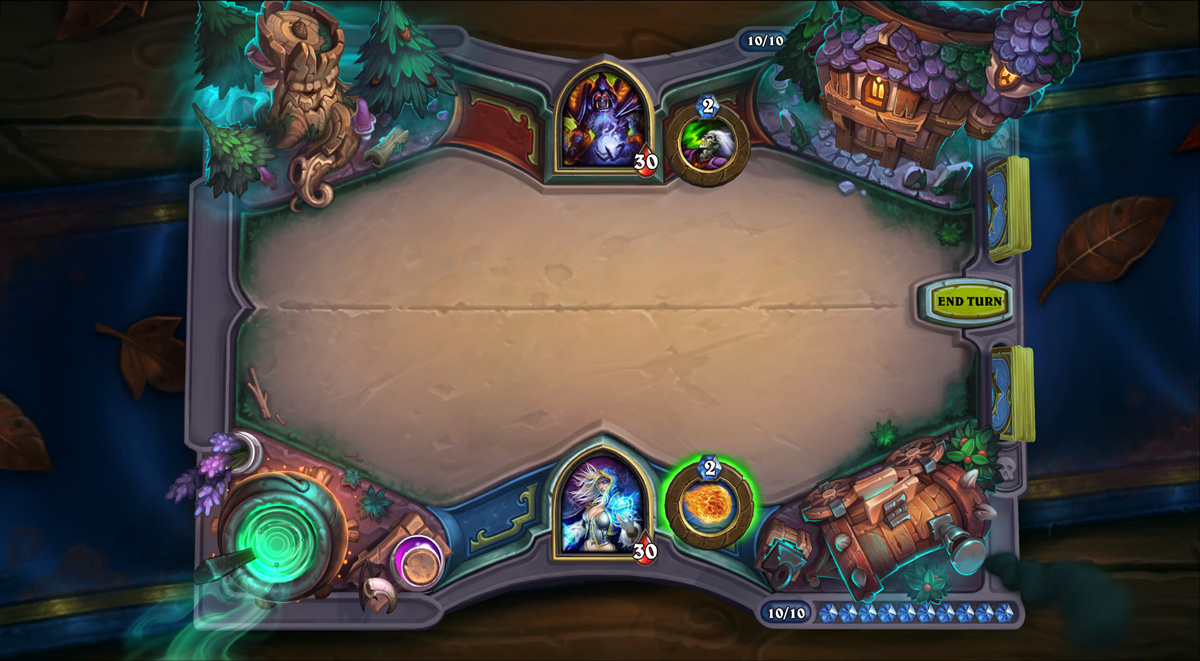 While talking about the new expansion was cool, I really wanted to pick the devs’ brains a bit, this being GDC and all. For example, I was always a big fan of HS‘s Adventure packs. I liked the smaller batches of cards, the single-player missions slowly unfolding, and not having to worry about RNG giving me the cool new cards that shake up the game.

However, the developers mentioned that the smaller sizes led to meta-stagnation, where people figured out optimal deck types and those decks would dominate for months. While bigger expansions require more work for the team, the new Missions Team helps take some burden off the former HS team which was balancing all aspects of the game at all times.

While I may dislike RNG giving me cards to play the game I want to play, I actually love it during my matches. I love hidden or unknown factors in the heat of the moment, as long as I feel it’s balanced (no literal coin flips to win the game) and gives me a way to react. In fact, one of my favorite Magic the Gathering sets was Unglued which was also known for its randomness. I know not everyone loves items on in Smash Bros, WoW’s old arena environmental hazards, or world PvP, but clearly Hearthstone appeals to lovers of “randomness” to an extent. Pros, for example, generally rage against it.

Ayala told me that when it comes to RNG, the team tries to steer clear of anything that your deck wouldn’t be able to hand. More partial random is better so you have some degree of control, like random targets on the board or in your deck: You can do something in those scenarios that can change the outcome of your RNG play. No coin flips to win the game, but also nothing that would unbalance the first six or seven turns, when things are more “honest Hearthstone.” After that, all bets can be off.

This is why I brought up the idea of introducing an unnerfed Yogg into the Hall of Fame. Turn 10 isn’t so sacred, and Wild is already pretty crazy. No promises on that one, but they seemed warm to the idea. Interestingly enough, the team hasn’t even considered the idea of bringing any cards out of the Hall of Fame, so don’t craft any of those cards in hopes that they may return to standard.

For custom tournament fans, good news! This feature won’t be restricted just to Fireside Gatherings, the LAN based player-made tournaments. They will be region locked, so if you want to play from the US with your German friends, you still need to play on a European server, but you can still have your own tournaments just for fun.

And speaking of fun, fans of Hearthstone’s co-op modes will have to keep pestering the devs if they want something non-seasonal. The team likes working on them, but the “hand-waving” to create them is less than ideal. Tavern Brawls are going to be your best bet, and while I know some of us enjoy Brawls for the random fun, the devs reminded me that Brawls are supposed to have something for every kind of player once in awhile. That means you shouldn’t expect certain “unpopular” modes to disappear just because a faction of the player base hates them (looking at you, Brawlisseum).

As the developers reiterated countless times, the start of a new year is the best time to jump back into Hearthstone. While old sets leave and everyone is fiddling with the new meta, your weird decks might actually be able to make an impact. I’m a lapsed player myself. Dungeon runs weren’t my thing, but mostly because I knew I might spend all night in them when what I really wanted was card rewards or gold for arena. That being said, free packs, a legendary, and an arena shake-up are appealing, so I’ll probably sniff around the Witchwood when Blizzard opens the gates. Thanks again to Dave Kosak and Dean Ayala for their time!

Massively Overpowered is on the ground in San Francisco for GDC 2018, bringing you expert MMO coverage on everything (and everyone!) on display at the latest Game Developers Conference!