Let me be upfront: I’ve never gotten into a superhero MMO. I love comics; outside of work, it’s probably the only fiction I willingly read these days. It’s just the people I play with never got into hero MMOs, even when some of us finally tried DC Universe Online.

But I read all about them. And I know you superhero MMORPG players have been kicked around.

Heroic Games President and CEO Casey McGeever’s passionate about the need for the genre because of that, and that’s precisely why MMO Ship of Heroes was conceived. We’ve got superheroes everywhere these days, but as hot as the Avengers are, we’re largely given steaming piles of brown from their gaming-ignorant parent companies. So I sat down with McGeever to talk MMOs, tech, and a ship full of heroes during GDC 2018.

Talking to the captain

A look through McGeever’s professional history is, frankly, intimidating. It’s not that he’s a gaming legend or anything, but he’s been all over development industries. If you’re using Accuweather, for example, you know some of Casey’s work. So when I mention the rough times we see in the MMOverse, the fact that even the founding game IPs are being sold off or shut down, I ask why in the heck he’d want to get in.

Simple: Those are the reasons why to get in now. Something needs to shake up. For example, look at the market right now. Battle royale is hot, so what are people doing? Making games that genre. Modern-era games are hot, so they make a modern-day battle royale. If games that only used blue hues were popular too, that too would be cloned. And McGeever feels only in games do people see other, viable genres next to unexpected successes and have people still ignore those viable options.

As McGeever sees it, it’s not as if City of Heroes was unsuccessful when it went offline – it just “didn’t fit the corporate strategy of the owner.” As we both agreed, multiplayer games themselves aren’t in any danger; in fact, traditional single-player IPs like Final Fantasy and Mass Effect have either gone multiplayer and/or tacked it onto their single player game. We just don’t see a lot of it for superhero games outside of mobile titles.

So Ship of Heroes isn’t meant to replace CoH; it’s meant to complement it. McGeever is well aware that there’s most likely not going to be a new WoW and that developers need to be chasing and founding their own niche rather than trying to chase a largely cornered market. This is why McGeever says he isn’t worried about competition. In fact, he prefers it. It’d be more odd if he truly were the only one doing it. Besides, players need options, he says. You don’t want just one company making superhero games, and while some people may leave his game for a competitor, others may do the same and come to SoH.

For players by fellow players

All of this sounds nice, but I’ve talked to a lot of non-industry people with tech backgrounds who just don’t understand what they’re getting into. In this case, regardless of how well SoH performs, I can already see that McGeever is already more knowledgeable about the current game market than some industry vets I’ve spoken with in the past who claimed they knew what players want but had little to no experience with pillars of the modern MMO-verse.

For example, McGeever wanted flight in SoH from the start. For some people, that doesn’t sound big. For a developer, the first thing you realize is how much work that means. Think about World of Warcraft and why flight stayed in a restricted area for so long: The world wasn’t designed for it. Flight requires a Z-axis. It requires forethought about landing physics, how fall damage is calculated, how abilities interact with flight – heck, it means more art and building instead of hiding unfinished terrain behind raw height. McGeever’s learned that games need a lot more art than he’s used to, but since he’s got some good artists, it’s not a problem.

That being said, McGeever has also put community feedback at the forefront of design. Originally, he didn’t want any death penalty, but the community argued for it, so now death will have a sting. I personally worry about listening too much to fans, as I’ve seen countless times where people say they want one thing but pursue something totally different. Design-wise, I think the team made the right choice in listening to its community, and I hope it keeps making those kinds of decisions.

That’ll become especially important because McGeever wants player-made content. It’s a tricky project; players obsessed with, say, phallic imagery abuse creative tools, while others abuse the systems to min-max rewards. SoH will have a small team that’s supposed to eventually manually monitor chat – just imagine the amounts of content they’d also have to curate with this kind of system! McGeever mentions how lots of people have told him they’d pay to play a game with a nice community, but I’ve seen how a few bad apples can make the bunch feel rotten.

That being said, it’s hard not to want McGeever’s boundless optimism to pay off.

Maybe this is why SoH is sticking with silver-age-esque comic ideas. While the game will have magic too, McGeever reminded me how big sci-fi is with modern heroes in the mainstream. No one talks about how the original Green Lantern was powered by magic; they stick with the sci-fi story. While I’m disappointed in the fact that SoH won’t have anti-heroes or plotlines discussing whether or not heroes create the villains that they constantly battle, the lore does follow a well-loved era of storytelling.

Being the not-so-little guy

Heroic Games is still mostly made up of volunteers working remotely. McGeever notes that since people are doing what they love, and that working from home means getting up to do work you like is easier when you don’t leave the house, it works. He’s used to it anyway from other past work experiences.

The idea of having human moderated chat channels that don’t use any automation to find offenders seems difficult to me, but McGeever wants to use volunteers to help offset the costs, plus paid people. The idea is that the volunteers would receive training and never be left alone, plus there’d be a system in place where you could go over the volunteer’s head and report him or her to a higher-up if he or she made an error. It’s far from perfect, and I’m sure some volunteer would abuse the system as volunteer GMs have done in the past (and still do), but McGeever’s in the limelight. He’s got some good people on his team.

But this is also why there’s no possibility for a Kickstarter. It takes too many human resources the team doesn’t have. It’s not “impossible,” just improbable at the moment. I ask if the team has looked into using the Spatial OS system to help take pressure off the team and make a bigger game, but McGeever says they’re doing fine as they are. He gets the tech enough to talk to others in the industry, and when they question how their server tech is, he’s able to impress them well enough. 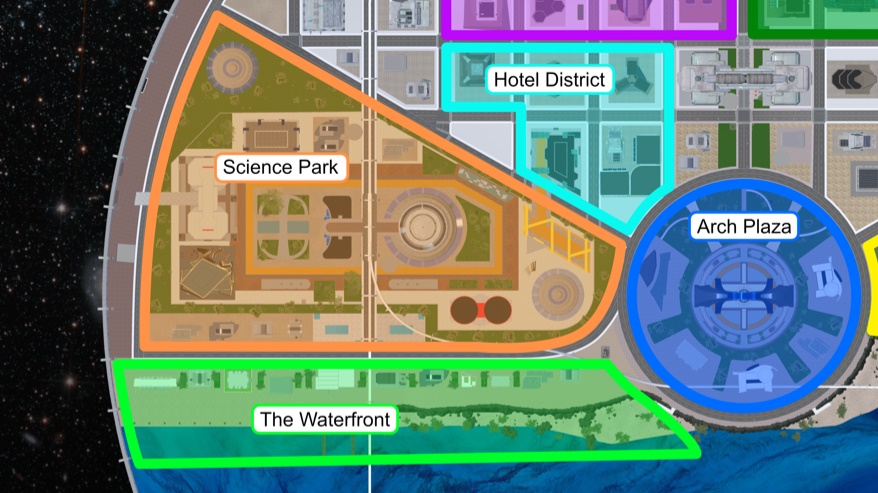 State of the ship

As you may have seen in MJ’s streams, the game’s coming along well enough. The character creator’s robust, and heroic movement is allowing for some nice freedom, to the point that a certain dev wasted two days just flying around and playing with how and what flight means to the game and player, so maybe it wasn’t a total waste.

Combat’s coming along well too, but McGeever won’t comment on crafting yet as the team’s not coding it yet, so stay tuned for more on that. That means it’s time for mission construction: repeatable missions, special missions, day-job missions, training missions, etc. The idea is that if they build enough content, people will come to do it, which is probably true. My concern with dev created content is always how fast people will consume it, but we’ll see how the team prepares for that.

However, we’ve finally seen the in-game map, and it’s quite large. According to McGeever, the zones are probably larger than some worlds in Star Wars: The Old Republic. The Hazard Zone below the lake probably won’t be done before beta, but as the devs just tested Science Park, they’re probably going to let people test a raid soon in the Arch. That probably gives you an idea of how much work still needs to be done, but considering the team’s size, small budget, and volunteer passion, I’d say it’s coming along solidly.

Even if you’re watching another hero MMO project, keep your eyes on Ship of Heroes. The team is made up of people who love MMOs and is clearly listening to their players, and all without asking you to pay for early access.