END_OF_DOCUMENT_TOKEN_TO_BE_REPLACED
One of the fun parts of this job – or one of the odd parts, depending on how you prioritize things – is how you can agree with absolutely every point someone else is making while having an exactly opposite reaction. You may recall that Andrew tried out the build of The Elder Scrolls Online: Summerset and walked away with a shrug, which to a certain portion of the ESO fanbase is apparently a vile insult (demos are serious business). I guess if your reaction isn’t fawning adulation of ESO, you hate the game, or something. I’ve never gotten that one myself.

At any rate, the fact is that I agree with Andrew on this point. I even agree with his overall conclusion. But my walk-away conclusion is altogether different; I found myself impressed with what the game was doing and thinking that this was going to be a pretty good expansion. It might not have anything as show-stoppingly novel as the Warden, but you can’t give every single expansion a bear-based class, I assume. (There has to be some reason.)

I don’t feel the need to recount as much of the events from the demo; they’re the same as the ones that Andrew himself recounted. The whole thing was pretty solidly ESO; it will feel familiar to any veterans of the game. You run around, slashing at things as necessary, engaging in the rather tried-and-true combat mechanics while trying to piece together what the heck is going on in Summerset – because something definitely is.

Several bits of it particularly satisfied me, though. For example, I really enjoyed the fact that the new tutorial takes about four minutes for an experienced player to rush through, complete with some rather cool little effects where you’re cascading through darkened portions of the mind. It felt fresh, straightforward, and far more to-the-point than the tutorial I played for the base game.

Even better, though, is the monastic order that you’re dealing with as one of the movers and shakers behind the scenes. One of the things that’s always bothered me about the universe of the Elder Scrolls games is the sense of things existing more or less to fill narrative boxes regardless of plausibility; there’s a guild of assassins because there has to be a guild of assassins, but it doesn’t really have a reason to be there aside from being a guild of assassins.

The Psijic Order, on the other hand, was the original source of the Mage Guild but was never really meant to go in the same direction; it’s an order far more focused upon keeping an eye on things than it is upon actually using its power to do much, and it has the feel of being a spanner in the works that can both appear and disappear as the situation warrants. It feels, in other words, like a guild of mages, powerful people working to purposes that are utterly alien to the outside world.

Summerset itself also has a nice edge to it; the whole place isn’t just idyllic but painfully idyllic. It gets back to the idea of elves as comparable to the Fair Folk of European mythology, unearthly creatures that don’t quite intersect correctly with the material realm. The place felt like it had a sting to it.

And that’s even before you start peeling off the layers of deception and conspiracy working in the region. There’s the implication that Summerset has become so stratified and set in its collective way that people have less latitude in doing what needs to be done.

All of this makes me like it very much. The general sense of place and culture was strong enough that I was enjoying my time in the world; when it was time to leave, I was ready to go, but mostly because I would rather explore this stuff on my own time instead of just on the demo floor.

If you’re already fond of the game, you’re going to like it. No, you’re not likely to come around and start liking it if you didn’t already, but that’s a feature, not a bug. 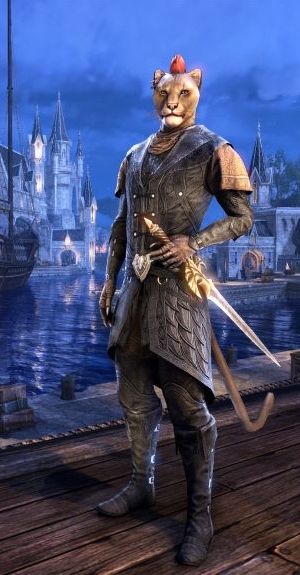 I also had a chance to chat with creative director Matt Firor about the expansion and the future direction for the game, starting with an obvious question about why this is happening now right after Morrowind. The answer is amusingly simple: Summerset itself is geographically opposed to Morrowind, and it’s also thematically different. It’s all bright whites, clear skies, and high elves, but that harbors a very different sort of danger rather than less danger.

It’s also a necessity, as the game is increasingly running out of chances to really check back in with the areas visited in prior Elder Scrolls games. There’s always going to be a mix of the familiar locales and the new, but there are only so many familiar locales that you can put in the game; at some point you have to branch out. Fortunately, there’s the lore established to support them.

Of course, that lore can be a bit of a double-edged sword; players exploring Morrowind are doing so chronologically before the game of the same name, which meant that the designers had to work overtime to make sure no one could interact with any slumbering forces in volcanoes. That doesn’t mean that the time is limiting, though, just that players have to get nods to past titles through more creative means.

The new tutorial also is at a hard right angle to the storyline explained in the original game, but that’s intentional as well. It’s bringing the game more in line with the classic philosophy of Elder Scrolls titles, wherein you can abandon the main story within moments if you want to, but you have to know what you’re doing first. If you’re jaunting off away from Summerset as soon as the tutorial is over, odds are you know what you’re doing; otherwise, there’s plenty of level-appropriate stuff to try out anyway.

The same goes for elements like the ever-engaging Raz. Either you already know who he is (which means he provides some solid continuity) or you just think he’s another NPC (with a unique voice and an interesting demeanor). Either way, he’s serving his purpose.

I did not, unfortunately, get to play around with the new skill lines, although they already look quite interesting (as you might imagine, I’m already on board for joining up with the Psijic Order). But I feel fairly confident that, as with the other additions, we’re looking at something evolutionary rather than revolutionary. It’s the latest installment in a game that has been doing its thing long enough to know what players like and how to capitalize on that engagement.

For some people, it’s going to be something you look at with a shrug and general disinterest. If you’ve already been liking the game, though, you’re going to have much more to like with this expansion. And if you have some deep hatred of elves, well, your personal issues are weird, but there’s plenty to imply that there’s more going on here than showing how well the elves have been managing their island. (The opposite, even.)

Massively Overpowered was on the ground in Boston for PAX East 2018, bringing you expert MMO coverage on everything (and everyone!) on display at the latest Penny Arcade Expo!
Advertisement

The whole game is ‘painfully idyllic’.

ESO is probably the best mmo out at the moment with quality of content. The cash shop is rift like whaling, but they do have ‘coupon days’ for poor plebs like me so fine.

The only problem is there’s too much content. The questing is the best in any rpg ever, and you want to finish it, but the volume of voice acted tamriel is just overwhelming. I don’t think i’ll ever get through it all, and because of that kinda drifting away.

That’s just me personally though. Can’t get away from sandbox elite dangerous, but its the only other game that’s managed to do it if that counts. And i seem to try a few new ones each week :/

Whether or not this particular update leaves you demanding more or not, you have to give it to the guys at Zenimax they are producing decent content at a good rate.

At worst it will be 30 or so hours of new adventures and story, at best a chance to visit an area not seen since the game was 2d and you could camp behind shop keepers till nightfall and then rob their stores.

I have read a couple of these PAX posts and I have to say you are doing a great job, Eliot. Keep it up!

I like ESO, i’m literally still subbed even though i haven’t played it in almost a year. It’s a good option if there isn’t anything better. It’s an ok game to pass the time. (canceling soon)

Then you have SWL, and now for me Shroud of the Avatar “especially sota” these games are time stealer’s, there just isn’t enough time in the day to play these, you think an hour has gone by when 4 have.

Who thought the previous article was an insult?

There were several abusive commenters (whose trolling was removed). ZeniMax apparently didn’t like Andrew’s opinion of the demo either (even though he liked the game).

As an ESO player myself, I thought the whole thing was well constructed and thoughtful. And I vastly prefer a reviewer/tester who will point out flaws and issues over one who just “fanbois” all over the thing and ignores glaring issues.