Back in 2015, Star Citizen passed a million registered users. At this point, the game has passed two million. Three years later, it’s doubled. It also means that the staff behind the game wants to celebrate by giving backers a shirt.

Not a real shirt, though; an in-game shirt! So you don’t have to just tell your co-workers that you were part of the two million backer mark, you can show it off to the people who are more likely to think you’re cool.

Preview art for both the two million backer shirt and the one million backer shirt are available now; the latter is blue while the former is red, so even if you didn’t notice the number on the back you can still tell the difference. There’s no ETA on when these shirts will be available as the game moves through its test phases, but until then you can enjoy a forum badge to ensure that everyone knows you were in on the ground floor. (Assuming the ground floor is two million.)

Is it time to start with the ” I donated 50 bucks and all I got was this stupid digital T Shirt” memes?

So all throughout 2015 and 2016, the reason for no output was the game had to be perfect on release and publishers are evil its going to be polished. Fast forward to 2017 / 2018, and it looks like people are playing a janky alpha still (even though it does seem to be improving).

To me that means you can consider the game 5 years into development with zero output, or consider 2-3 years of development of wasted time. One of those has to be true.

Real reason for post was the 600i footage was the first positive thing ive seen out of star citizen.. in a long time, but im not sure considering the monster of how they milk backers can ever make it whole. Its pretty horrendous.. this site only skims at the details. Its actually creepy that people fall for it.

Quote Stkmks Returns: “the 600i footage was the first positive thing ive seen out of star citizen.. in a long time”

In short you missed the past 5 years :)
CIG do not milk anyone. Backers are players with a brain and a goal. If you call milking pledging 45$, many have 10 times this amount on there Steam account and hardly touched them after purchase.
Nobody forced Backers to contribute further and that is not worst than spending hundred $ to smoke or some champions league saison ticket.

Publishers are not evil. There economic model is just based on 1$ for game development and 3 to middlemen management and share holders. They gather 10’s billions $ (quite an impressive number isn’t it?) during the past decade and have no plan to deliver what backers are looking for. That is creepy.

May have missed it, but not really. As a thought exercise, lets consider all the atrocities by CIG and their cultists superficial. Unfortunately the game itself also turned me away.

– All the non ship areas are really primitive doom era corridor levels. This is bad design that is fundamental and so profound in everything thats made…

– The cheezyness of the tone, being a parody of every military space fiction that ever exists, im not inspired by. When squadron42 is done if the system requirements are acceptable (i’ll even upgrade within reason) almost certain ill get it, but being a space marine, in such cheezy form, is not my fantasy (as a contrast, elite has a much greater sense of mystery in its theme as sparse as it is). Even the naming of very single base of ship sounds cheezeball stereotype.

Luckily i found elite so haven’t experienced the likely torture of the last few years first hand.. “content drought” was it? So if it ever does come out might not be so jaded by then.

Getting back to it.. that 600i is bloody awesome. Elite, there’s actually something to match now!

Also, if you even touch that alpha for a second all the justification for 2015 /16 noshows evaporates right.

I definitively touched Alpha quite a bit… since 2013. So I can see how the game developement improved in all area. Take the time to compare all original pledged ships like Aurora, Avenger, Mustang, Drake, Freelancer and counting, compared to what they are today, it is day and night.

Clearly you are selling Elite and said to be turned away from SC. Your call man. As an earlier backer of Elite with life free update, I have been turned away from Elite for the very same reasons… and looking at what current assets provided by SC in Alpha 3.1, it is already more than Elite and by far. Still not a playable game? Correct. It is not released as such.

Not every game please everyone. Come back when SC is a released game if you can’t swallow Alpha. Or try any other games belonging to space genre: NMS, Hellion, EVE.

As a backer, I’d rather have the game than the digital t-shirt. Just sayin’ …

Hope you are well, sir!

Since you seem to enjoy esoterica, I’ll reveal that this icon of mine is actually the old medieval alchemical symbol for the “element” of Air.

I was a big fan of the Freedom Force single-player computer game created by Ken “Bioshock” Levine.

It appeared a little before City of Heroes, and is widely considered to be the first game to break the “superhero game curse” i.e. every superhero PC game made prior to Freedom Force generally sucked in some way or other.

So, I was a huge fan of the game, which had an intentional retro-1960s feel. It was very, very, very influenced by the classic Stan Lee and Jack Kirby Marvel comics of the 1960s .

One of the female superheroes in the game was a transmuter named Alche-Miss (of course), and this symbol was on her cape.

I started using the symbol as my icon, simply because I like the look of it.

And now you know the untold story! :-)

Freedom Force can be found on Steam for cheap, if you’re at all interested in it.

There’s also a Freedom Force 2, but it’s simply not as fun (in my opinion), as it time-travels back to World War II, and loses a lot of its brash 1960s comic book charm in doing so.

Not sure how the Steam version plays on modern rigs, though, so you may want to check the user reviews.

Cheers, my pal. Be well!

My very own “Schlag Original”! Thank you my friend; you honor me. Be well. :-)

i just realized that star citizen is the longest game i’ve played in my life.

i’ve been playing it for getting on 5 years now. that beats out cs/css’s 4 years.

nothing better than lots of salty haters denying the success of a game they keep…denying.

Success is measured differently for different games. For example, Star Citizen will be considered a success if it actually ever exists.

The title’s not correct. The milestone is 2M “citizens” (aka accounts). A “backer” is someone who’s given them funding. SC’s much closer to just over 1M of those. (was somewhere just shy of 1M last September)

Act now & you can have your very own vaporware T-shirt!!! 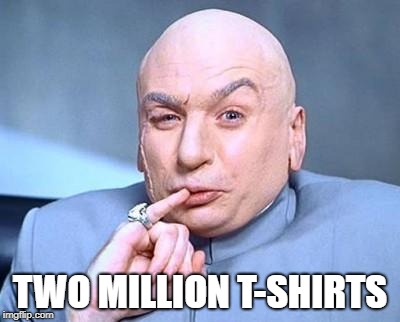 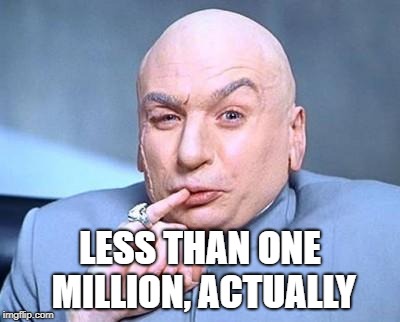 No one with the “All I got was this…” joke yet?

I donated $3500 to RSI and all I got was this crummy pixel tshirt.

i’m gonna laugh if they put these in game in a super awkward way just in terms of the development progress/state of the game before female avatars.

ofc wasn’t as much drama as one would reasonably expect from their monocle thing so… maybe the fandom has a higher tollerence for idiotic decisions than i do.

Black Desert shares another round of player questions from the Heidel...