END_OF_DOCUMENT_TOKEN_TO_BE_REPLACED
The fun thing about ranking the beast tribes of Final Fantasy XIV is that before I started in on this, I actually had no idea who would wind up where. I knew there were some tribes I liked more than others, but the actual final rankings surprised even me. Mostly toward the top; some entries, like the Lupine, were always going to be low on the list. But who would have thought that the top spot would go to…

Well, you’ll have to read for that. For now, let’s just make sure you’re caught up with the bottom ranks and the middle ranks. We’ve got five tribes left to go, and so by process of elimination you no doubt have a relatively clear picture of what tribes have to be here in some order, but let’s count them down. Starting with number five, just past the break. (The other four are further past the break.)

When it came to the bird-related beast tribes, comparisons with the Yagudo of Final Fantasy XI were inevitable. To an extent, the same thing happens with the Kojin; you can’t talk about Kojin without also talking about the Quadavs. Those are no slouch of a tribe either… but the Kojin actually come out looking good in the comparison, possibly not better but certainly not worse.

We have a clear picture of why the Kojin may not necessarily relate well (or at all) to the rest of the world; they’re not bad merchants, but the values that they ascribe to objects are wildly incompatible with what the surrounding societies need and want. They also provide an interesting viewpoint when it comes to how the Empire relates to them, employing them rather than seeking to exterminate them for forces that are somewhat overstretched in Doma to begin with. For that matter, the tribal split even makes solid sense.

For all that, the tribe never comes off as stupid or silly, which would be very easy to have happen when they seem to be attracted to some things that other cultures consider to be junk. Some of it may be junk, but some of it isn’t junk, and it’s hard to tell at a glance if the Kojin are as perceptive as they seem to be. You get the sense of a culture that’s almost able to integrate with the spoken races… but not quite there, due to a gulf that just can’t be bridged.

One of the funny things about this tribe is that it never really sinks in for me how big Kobolds are. They’re nearly the size of Roegadyn! Their hunched stature and everything makes them seem small, but they’re huge. They’re bigger than some other tribes, even! And that goes well with how important they are to the story, because I feel like their backstory shows just how badly Eorzea’s nations handle the tribes.

Kobolds are the victims in the interactions between them and Limsa Lominsa. The two groups had a peace treaty, and in the wake of the Calamity Merlwyb just decided that she didn’t have the option of following it any longer. The hostility of the rat-men against the city isn’t just about their religious beliefs, it’s about having a very specific agreement that the Maelstrom violated because it could.

This is one of those things which the game could do to put more emphasis on. Don’t get me wrong; like all sapient peoples I adore Merlwyb and would do anything she asked. But unlike so many of the other tribes, the Kobolds are only lashing out in reaction to brutality, a theme that was hit hard in FFXI but only gets played with in places here. The Kobolds deserve their revenge, and the fact that they’re losing is almost heartbreaking.

Considering that these rats manage to be the victims and still wind up with lots of really funny stories, you can’t help but love them – love, adore, appreciate!

Gosh, at no point did I expect a race of bug-men to be one of my favorite groups in the game. I have issues with bugs! And yet the Gnath wind up being so earnest, so heartbreaking, and so unexpectedly gentle that you can’t help loving them. They are occasionally silly, but more than that they’re just moving.

The thing is that the Gnath story isn’t really just about breaking from the hive; they’re telling a story about what it means to make your own identity when you find you can’t be part of a group any more. That as much as you want to pretend you’re still in a group, you have to form something new, you have to forge your identity even while still retaining parts of what you used to be.

There’s so many things that this relates to. As a queer writer, I can relate to it on a personal level. But it goes for everything from finally leaving a toxic family situation behind to transitioning, and it does so through a lens of fantasy that everyone can understand and relate to. That’s really great and special. 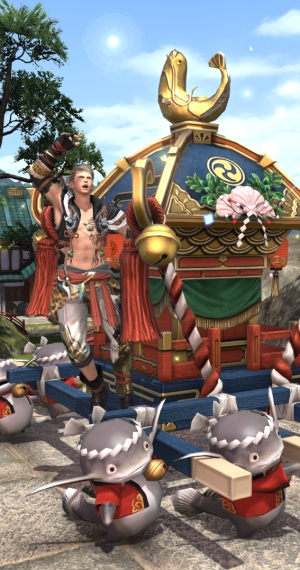 After two somewhat more serious entries… well, everyone loves the Namazu. And they’re wonderful, and not just because they’re adorable catfish people. They’re wonderful because you get the sense that they really just are not that smart or civilized yet, but they’re also surrounded by people who are civilized.

So often, the “not very bright” culture is typified by being a culture of warmongers. The Namazu, though, are pretty low on the civilization totem pole, but they make up for this by trying (and often failing) to act smarter. The whole series of quests focused around them highlights how the fish-people are copying the methods of other cultures without understanding the reasons behind them, and in the process managing to forge a shared identity despite going about it entirely the wrong way.

Besides that, though, the Namazu also manage to bring a form of easy humor to the game that feels like has been missing for a while since the original Hildibrand line. It’s not that the Namazu exist in some parallel dimension full of pratfalls and anime sight gags; there are real consequences for their overwhelming stupidity. But they persist, and their humor is so frequently grounded in that simple reality of not being particularly skilled but endlessly determined. Several moments during the reputation quests struck me as laugh-out-loud hilarious.

So yes, I love my little whiskered trash catfish children.

Yep, I put the other fish tribe at the top! It surprised me, too.

Here’s the thing that makes the Sahagin work so well for me: more than any other tribe, the Sahagin are entirely alien to the spoken races. It’s a level beyond any other beast tribe. There’s no peace agreement between the Sahagin and Limsa Lominsa because there cannot be, because the Sahagin literally do not live in a realm wherein they can relate to other races. We get some hints about the massive broodmothers below the surface and reminders that what we see on the surface is just a tiny, tiny fraction of the actual Sahagin society… simply because they need this space for raising their young.

They don’t respect borders because they don’t actually care. They can’t be bargained with because their society, while developed and civilized, is so unbelievably divorced from anything the surface-dwellers do that it’s almost painful. They really feel like a completely alien culture, a species so far apart from anything else that even conversing with them is a challenging task.

So here’s to you, fishies! You’re my favorite right now. It surprised me, too.

As always, feedback is welcome in the comments below or via mail to eliot@massivelyop.com. Next time around, let’s talk a little bit about the latest live letter and the upcoming collaboration event, the good and the bad alike.

Fortnite celebrates the third birthday of Battle Royale with challenges and...