If you want to get into ARK: Survival Evolved’s PvP scene, aren’t willing to deal with the mega tribes and rampant cheating found on official servers, and still want more permanency than Survival of the Fittest, the new Conquest cluster may be for you. The survival sandbox game launched this new mode of 36 connected servers just this weekend on PC (sorry consoles, you have to wait), giving players a new option for large-scale PvP.

What is Conquest, and how does it address the unwanted scenarios mentioned above? That’s what this Survivalist is here to tell you. 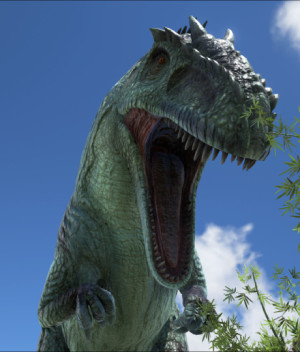 In Studio WildCard’s announcement, the removal of mega tribes seems to be the expected top-draw of the Conquest cluster. The idea of Conquest is to offer a better, perhaps more fair, large-scale PvP to groups without the problems that mega tribes brought. Mega tribes could put a choke-hold on servers, effectively locking down available slots and destroying everything that belonged to everyone else. If you couldn’t get back in, you definitely can’t rebuild. And this isn’t just on the mega tribes’ home servers; they could also move between servers, locking the original inhabitants out and decimating that server. Folks looking for large-scale fun PvP were basically out of luck when mega tribes decided to be trolls. WildCard is mitigating this by restricting tribe size: On the 100-man Conquest servers, tribes are capped at 25 players. (Personally, I think reducing that to even 15 would have been better.)

What is stopping tribes from allying and making a form of mega tribe? Thankfully, WildCard is. Conquest initially had alliances planned, but that was scrapped by launch after an outcry. Plenty of players expressed concern of how alliances would effectively be mega tribes pulling the same trollish stunts and ruining the PvP. So official alliances (the kind with in-game perks) are disabled; however, WildCard emphasizes that unofficial alliances can still form. Tribe cooperation — especially shifting alliances — could be an interesting mix for large-scale PvP. Informal alliances could still make things difficult, but I think they are far less likely too. After all, aggressive dinosaurs and turrets don’t recognize informal alliances, and neither do building permissions.

Can tribes still raid other servers? Yup, they sure can. Server transfers are turned on within the cluster (but not from other servers). But even if they do, there are 75 other player slots there, so raiding tribes will never be in the majority. Chances are they won’t be able to inflict as much damage. And this scenario opens up something interesting: Imagine a for-hire white-knight tribe or two you can get to come to your server and lay the smack-down on trollish tribes that ally to cause more grief than PvP? I’d enjoy watching that.

Those who like the mix of PvP and dinosaurs could participate in Survival of the Fittest, but that is a temporary battle royale mode. What of those who want the PvP to be a way of life? Conquest hopes to offer a more long-term, sustained PvP environment. This cluster offers increased rates so that tribes can better rebuild and reestablish instead of being wiped out completely with no hope of recovery. Experience, gathering, taming, breeding, hatching, and raising rates are all at x2, so double that of the official servers. Will this be enough to help? We’ll have to wait and see. That said, Conquest servers are not involved in any evolution events, so there are no weekends of increased rates to look forward to.

An interesting thought with the increased server rates: If increased rates are a big part of making Conquest playable – meaning folks can rebuild after PvP losses – is this WildCard admitting that the official servers are unplayable? Is the ability to rebuild restricted just to mega tribes who have enough manpower to soldier through the regular rates? And does this mean 25-man tribes are considered too small to survive on official servers? Do rates need to be boosted more often or permanently to make official servers more viable, or is that the stop-gap that Evolution events are supposed to be?

Although the official announcement initially focuses on the issues of eradicating mega tribes and raising rates, perhaps the biggest difference is going to be that the studio will be actively policing these 36 servers. Say what?! Yup, the enforcement team, which is being expanded, will actively patrol these servers and intends to get to know and work alongside players. The plan is for leaders of the large tribes can submit a request to join a special discord server to get access to this enforcement team, which will include English and Chinese support (expanding to Russian and Portuguese support soon).

Two things come to mind with this. One, does this mean smaller tribes will be excluded from the discord? What is the definition of large tribe? I don’t like the idea that 10-player tribes could be left out and not represented. Two, does this feel like just an admission that there is rampant cheating on the official servers? And instead of addressing and cleaning that up on official servers, it’s just being left. If you want a better experience, leave everything you built up and go start over! That’s definitely an easier fix for WildCard, but not so much so for long-term players.

What is the policing based on? WildCard has published a Code of Conduct that players will all be held to. This covers hacking and exploiting, griefing, and player misconduct. There is also a blurb on false reporting noting that players who are found to report falsely just to harass others can be punished.

Will this extra enforcement work? Or will it be a clustercluck? Again, this is an only-time-will-tell scenario. Many are hesitant, feeling like these servers will turn as bad as official ones given time. But perhaps WildCard found a way to finally make the PvP that ARK was built on. I hope that for those who would love a good PvP experience, that the Conquest cluster is a success.

is presented so nonchalantly in an article about an online game, you know there is a serious problem.

Still wouldn’t play this. 100 players limit is still pretty small for an enjoyable “MMO” experience (and as it has been pointed out elsewhere, such small limit can be easily abused by alliances even if there are no in-game tools for forming alliance) and for “quick large-scale PvP” I’d rather play any of current Battle Royale games or even Battlefield games, where there’s no silly “tame/breed/feed pets” mechanics to slow you down.

I’d sign up for the white knight tribe… and I don’t even play.

I’m picturing the A-Team, but with armored dinos in place of farm trucks they turned into tanks.

I’ve learned to love survival games in the past few years, due to the lack of open world mmo’s. Ark may be the biggest, but I’ve stayed away from it for many of the reasons listed in this article. Honestly, this new type of server doesn’t do enough or change enough to alleviate my issues with it. I’d pay for an official server with active mods/admins per month, but player toxicity runs too rampant.

I’d wait to see how the “active policing” of this new cluster goes. Given events of the past it may just devolve into players accusing Wildcard of having favorites, ignoring the actions of the more popular tribes and punishing their opponents.

Or, maybe Wildcard learned from the past and will actually do a good job on these. Which still makes me wonder if the other official servers are going to be left to rot like the “legacy” servers were.

If you think you would want to play ARK, though, and are willing to pay monthly for active administration, have you looked into getting your own server and recruiting players to be admins (if you don’t want to do it yourself, of course)? That is one of the strengths I have seen in the past few years of this genre. The ability to run private servers with your own rule set. (Also, one of the reasons I am watching to see what Fallout76 does. I suspect Bethesda will want to run their own private server business and restrict modding to their store. Which may prove to be too restrictive for some players.)

As a PvP focused player in games I really like the idea of ARK but the actual game mechanics make it exceedingly frustrating to play without being able to dedicate 16+ hours of your day to the game. Even at 2x speeds you’re looking at a massive complex to manage kibbles/eggs cause that’s the only reasonable way to tame on low settings. The bigger you are, the more vulnerable you are and more likely you will be targeted by multiple people.

Active policing is interesting and all but it’s going to be difficult to really change things. People are capable of incredible deviousness and my first thoughts in this system is break up a mega tribe into smaller tribes and then simply never attack each other while eliminating the competition. If they get wise throw some mock battle in the middle of no where sacrificing unimportant dinos.

If they get wise throw some mock battle in the middle of no where sacrificing unimportant dinos.

If people get wise they still can’t do anything. Per the article, WildCard sees no issue in unofficial alliances. As long as the alliance is focused on dominance rather than griefing WildCard isn’t supposed to intervene.