If you thought that all Samhain had to offer was official Secret World Legends missions and events, you’d be mistaken. A-machete-through-the-skull sorely mistaken. In fact, there are quite a few more ways to partake in the holiday, and many of these have been scared up by the community. There are live in-game events, contests, and real life events that run  between now and All Hallow’s Eve. For those really good with knives and other sharp things there is real-life pumpkin carving contest. If you are better at costuming, there’s a masquerade. Creative folks can jump in the poetry and art contests or the storytelling. There’s even a dev stream with raffles that will highlight an in-game scavenger hunt.

END_OF_DOCUMENT_TOKEN_TO_BE_REPLACED
You don’t want to miss all these goodies, do you? Of course not! So grab your writing implement of choice (pen, pencil, marker, dagger, sawed-off appendage) and take note of these spooktacular Samhain events to add to the official hooplah. 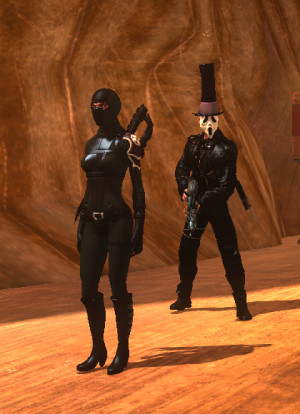 What is the Samhain season without costumes? One of the best things about Secret World Legends is being able to put together some impressive outfits thanks to the very robust cosmetic system. Now you have a chance to put your savvy or spooky creative clothing skills to the test; Nine Swords and DJ Drina of Happy Tentacle radio are hosting a Monster Mash Masquerade on October 20th, starting at 1:00 p.m. EDT. Held in the Albion Theatre in London, this event is open to the public. Show off your costume and participate in a trivia contest for a chance to win prizes.

As integral as costumes to Halloween is the practice of carving pumpkins. Just because we can’t really take a knife to some in game (I mean, most are already carved!) doesn’t mean this activity is off the table. Well, you don’t even really need a table: All you need is an idea, a pumpkin, a camera to take its picture, and an email to send the picture in. SWL wants to see you best SWL squash art!

To participate, slice, dice, hack, and slash your pumpkin in a Secret World Legends theme and snap a picture to email (as an attachment) to contest@funcom.com by October 24th at 11:59 p.m. EDT. Be sure you use the subject line “Pumpkin Carving Contest” to make sure it goes to the correct judges, and include your in-game name! If you have more than one idea, never fear; it appears you can enter as many times as you like as long as it is only one entry per email sent.

Entries will be shared and the winner announced during the dev stream on the 28th (see below). I don’t know about you, but I am hoping to see some Bogeymans or the Cat God himself. Or how about all those lovely Nursery dolls? And I’d love to see a representation of the Seven Silences on seven pumpkins, but would that technically be disqualified since it isn’t in SWL yet?

Prizes include an in-game Haunted Grin T-shirt for all participants and a real-life orange hoodie with the SWL logo and character name for the winner.

A writing contest eh? For my most favorite holiday ever? Involving my favorite game, you say? Well, sign me up! I might have a line or two that could hopefully at least crack a smile on — or send shivers down the spines of — the judges. If you’d like to pen (or carve in blood, whatever suits your fancy) some rhymes or prose in honor of Halloween, Samhain, and Secret World Legends, start scribbling!

Your original works of written art will be accepted through October 24th, 2018 at 11:59 p.m. EDT. Send them via email, either in the text or as an attachment, with the subject line “Halloween Poetry Contest” to contest@funcom.com. Rules state that entries remain under 500 words and must be the original work of a single author.

If chilling tales are your cup of witches brew, Knightsbridge Consulting is hosting an afternoon of storytelling on October 27th at 3:00 p.m. EDT at the Horned God Beer Garden in London. Lots of lore is to be had! (No, no the collectible kind, sorry.) 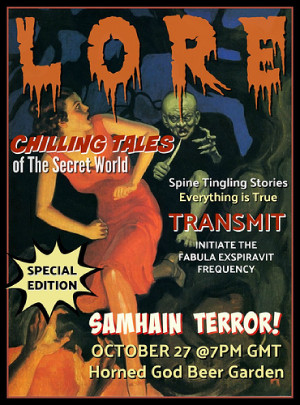 Starting at 12:00 p.m. EDT on the 28th is the Halloween fun live DevStream, featuring community managers Andy Benditt and Nicole Vayo. There will be music and a live raffle for a Secret World Legends hat, with the logo and your name on it. But the biggest star of this show may very well be the big in-game event that will be featured while it is going on live, which is…

I’m going to straight up and say I was totally excited to participate in this event, then equally disappointed to discover it was on a Sunday, a day I am not available. If you are available starting  at 12:00 p.m. EDT on October 28th, however, you might want to jump in on this! This is an in-game scavenger hunt that will pit teams of four (or less) against each other to to find…whatever it is you’ll be tasked to find.

If you want to participate, you’ll have to sign up early and get on the list. The deadline to enter is October 25th! Email contest@funcom.com (subject line “Scavenger Hunt”) with the following information:

That final piece is very important so your team is not assigned a zone someone can’t enter. Zones will be assigned randomly and teams will receive an email back with theirs. Teams will then meet at the Stationmaster in Agartha at noon on the 28th and then be off to hunt. Don’t leave your zone during your hunt!

Each participant gets a prize: an in-game haunted grin t-shirt and (non-bag space using) memento. The winning team from each playfield will receive the coveted Jack Boone agent. If you needed more incentive to join in, there ya go! Be sure you can stay the whole time though, as you must be present to win

Whether you procrastinated and missed the other contests or your creativity is expressed in different ways, you still have the chance to participate in a Samhain contest. Saints and Sinners is hosting their fifth annual creative competition. Entries can cover a number of media, such as canvas, digital, edited screenshots, 3D models, stories, poems, or song lyrics — they just need to be your own original work and be based on the theme “Broken Stories” as well as be related to SWL. Bonus points are given to those who can also relate their entry to the Saints and Sinners club.

How do you enter your work of art? You can upload it to Twitter or Instagram and use  #SNSCreativeComp. Alternately, you can join the group’s discord

Prizes for this contest include a physical trophy, the legends launch t-shirt, lil red devil horns, and more.

The LORE shows are a fun and often under-publicized event. Great to see it mentioned here!