END_OF_DOCUMENT_TOKEN_TO_BE_REPLACED
Ya’ll can get excited over your joyous winter holidays, but this — this is my favorite season. And to learn that more of the amazing Samhain goodness that we know and love from The Secret World made it into Secret World Legends this year had me squealing with fiendish delight! I cannot tell you how happy that one little tweet teasing the return of the radios made me! It was… music to my ears.

What am I chattering on about? Why, the return of The Broadcast. This old-school radio program mission was the third Samhain event to come to TSW, and continued the trend of each year’s event getting successively more phenomenal. It joins 2017’s The Meowling (here’s the guide). Sadly, year number two — the Spooky Stories — seems to still be MIA from SWL, as are Halloween’s four and five. But I do have hope. I’d love for more than one past event to be introduced at a time so we can more quickly get to new holiday content, but I will riot if we don’t get The Seven Silences next year! If that is added, it will likely buy that one last year before we need to have new Halloween content in game. At least for this year, it’s very worth it to jump into game for the awesome ambiance and daily rewards of Samhain 2018. These spooks will dissipate on November 1st.

Music to my ears

The Broadcast is one of those missions I simply can’t rush through. It doesn’t matter that I have heard all of these broadcasts before — I still have to just sit and enjoy when I come across the radios. I’ve chilled and listened to them all more than once over the years and I don’t intend to stop now; in fact, I quite missed listening to them last year! Important note: Make sure you have the radio portion of volume turned up for this event.

There are a couple of things to note about this year’s mission. While you can get and answer the call from David Screed (of NYC laundromat infamy), you can’t actually do the quest before level 50 and the completion of the story mission up to Transylvania. You can come across the radios in the zones and enjoy the ambiance and stories, but you can’t participate in the mission. The final instance has that minimum-level requirement. On a good note for the more powerful players, said instance also scales, allowing players to pick levels based on their IP (item power), giving the option to make it more difficult with better rewards.

Likewise you can’t get the achievement The Golden Age of Radio, with its awesome broadcast-playing radio reward, unless you can enter Tokyo. You have to have finished the entirety of the Transylvania story line and the intro to Tokyo. However, you do not need to go to Tokyo to complete the mission itself, which is repeatable every eight hours (patrons) or 18 hours (non-patrons). That last bit is important: Since each mission only utilizes three radios, players who want the achievement will have to do the mission three times, finding nine different radios in total.

I am disappointed that this mission has such a high entry requirement, Sure, it doesn’t seem too bad for anyone who has been playing for any length of time; it’s hard to not hit level 50 fast! But the story component is a bit more of a hurdle than The Meowling had. And more than any of that, Samhain events are, in my opinion, the number one thing to entice new players to join the secret world! I’ve personally convinced many to check out TSW precisely because of and for the Halloween events. I’ve been hoping to continue that trend in SWL, but these barriers are making that harder. Now, I can’t use a key selling point because those new folks won’t really get to participate. That has to be disappointing to them and even a turn off to be barred from what they hear fans rave on and on about. Yah, that bums me out. 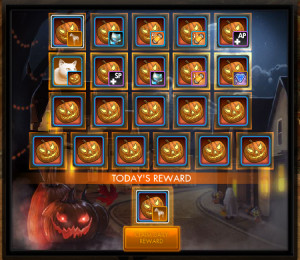 Halloween goodies are a winner right out of the gate; the very first daily reward is a mount. OK, so you may not like the bloodied white horse, but you do collect it your first day. The sixth day is a little less gruesome: a sanguine kitty pet. Other than these two, you get the standard anima shards, gear distillates, AP, SP, and an imbuer for a total of 10 days of bonus rewards. The final 11 days of log in rewards include only the mysterious Jack-o’-lanterns. Is it worth making sure you log in each day to grab them all? That’s up to you, but here’s the list of what you can expect from each successive pumpkin (it looks like it is following last year’s so we’ll make note if anything changes!):

(Because my grandmaster account already has many of the gifts as well as things from last year’s event, this is a work in progress to get the order filled out. My main only got Skull pendant necklace, silver; 1K CC weapon distillate on day one, so feel free to share what items you get which days!) Sadly, it appears that nothing new was added to the pumpkins, even with so many more days available.

As per other events, you have to kill the event raid boss in order to smash open your gift squash. Just like Samhain 2017 you get to face Jack of the Lantern, aka Super Jack of old. Keep in mind that you only get that buff for a few minutes after the kill, so be sure to open it quickly — and make sure you have enough room in your bag beforehand if you open it in the raid instance, otherwise your goodies will drop to the floor and you’ll be teleported out! Tip: If you want to get multiple Super Jack kills in a single hour, open the pumpkin and then go to character select (click exit now but do not cancel the authentication) straight from the instance to save on loading times. The raid is available at two minutes past every hour at the event portal on the main trunk in Agartha. 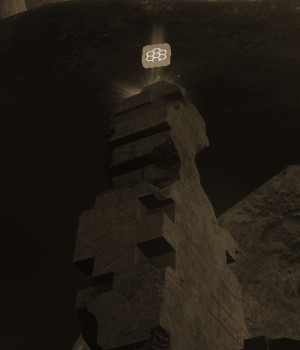 Legends in the making

As of this writing, there is a bug with this events legends/lore pieces: the collection doesn’t exist! Right now, when you pick up a lore it has no where to be recorded, so I cannot reliably state which lore is found where until this is fixed. Hopefully, it will be soon. I’d recommend leaving the lore alone until this problem is corrected.Once it is, you will be able to find lores here [Edit: the lores have been fixed!]:

Veteran TSW players will find the lore locations to be very familiar.

Besides gathering lore and collecting all nine radios, there are four more achievements for this year’s event. And each of those achievements is tied to completing the mission and killing the final boss in different ways.

You just knew that wouldn’t be the only verse to the song, right? Here’s the whole thing that you can sing along to throughout the month. (For the record, this song was created when the tweet about the radios came out, before Funcom started using it as a tag line!)

There’ll be seances for hosting
and people for roasting
burning their flesh from their bones
There’ll be scary ghost stories
and tales of the glories
of Samhains long, long ago!

It seems it’s the same list as last year. I just finished the raid on a char that didn’t get all the gifts last year, and she got:

So this would be day 4 rewards maybe?

Wonder why I got the title Incognito? Ahh because I had everything up until day 9 on that character! These are so awesome! Thanks. I’d have tot make a new free account and character every year to keep testing these since my GM account has so much by default lol.

I hope something different happens for the added days 11-15 instead of just anima shards.

With all the scaled version of the instance, I do wish there was a way to accommodate Lv 20 or something.

I’m running the event on a new character, and today was Day 1 for me.

No sign of the skull pendant on either my new character or one that ran it last year.

Yah I thought that was an odd gift! I think it was probably because my character HAS everything and so she is just getting random loot bags..and that first day may have been loot outside the bag

Thanks so much for the new character update! Please, keep them coming =D

I wish SWL would just go away. Knowing that the story won’t continue but that they keep running this repeatable holiday and event content is killing me.

I’m glad they’re bringing more of the holiday content back, as I missed most of it in TSW. Though if players below level 50 are allowed to do all of The Broadcast up to the final instance and only then locked out of it, that seems like a really bad way of handling things and sure to make people annoyed.

For us non-Patrons the cooldown for The Broadcast seems to be 18 hours rather than the usual 3 days, which is nice. I think they did the same with the Equinox event mission, so hopefully it’ll be the case for all limited-time event missions going forward!

When i think of things that go together; Secret World and Halloween is at the top of the list.

Yeah, as I’ve noted a number of times the past year or so, every day is Halloween in Secret World.

Same here! Even being locked out of content, I return every October for the ambiance!