After a week like this week, you might have forgotten that Elder Scrolls Online dropped its latest chapter on the public test server. Like the previous expansions Morrowind and Summerset, this addition to the game was named after the land where it takes place: Elsweyr. Of course, I had to see what was in store for Elder Scrolls fans and players interested in jumping into the game again or for the first time. As in the chapters before it, we have a mix between the very interesting and rather boring.

END_OF_DOCUMENT_TOKEN_TO_BE_REPLACED
I decided that I would hit Elsweyr from a couple of different angles so that I had a decent impression of what the expansion had to offer. I created two necromancers, the new class for this expansion. The first one was a brand-new character starting at level 1. I reset my champion points so that I wouldn’t even have those to help me out. The second character I made was also a necromancer, but this time I decked him out in everything. I even used the Skills Advisor to help take the guesswork out of the new class and to see what the game suggested worked best for that class.

Not really a prisoner

Elder Scrolls starts with a trope that characters start as a prisoner of some kind when at the start of the game. In Elder Scrolls Online base game, players are a prisoner of Molag Bal trapped in Coldharbour. For Morrowind, players are trapped on a ship. And perhaps because the developers wanted to keep with the trope, I was locked in a room in a medic facility just after a dragon attack in northern Elsweyr. It’s cute, but there really isn’t a reason to be locked in the room. In fact, the key is in the room on a table, and I unlocked the door myself.

The tutorial side of the game was interesting. Essentially, I was led into a sparring match so that I could learn the basic of how combat worked – unlike in the base game where I was led through the basics by fighting several enemies. In the Elsweyr tutorial, I fought one character over and over as he coached me on how the mechanics worked. The Morrowind chapter did the same thing. I am a fan of this kind of tutorial.

The fun started with the dragon attack. His name was Bahlokdaan, and he wrecked the place and pretty much caused havoc throughout the facility. My job was to get to the Dragonhorn, which was designed to ground a dragon if it was blasted by the sound wave. I fought my way through a small band undead to reach the top of the tower where the horn sat. All the while, Bahlokdaan flew overhead.

After blowing the horn and scrambling to find where the dragon landed, we fought him. At first, I was disappointed in this because I honestly thought that I was going to fight a dragon right at the beginning of the expansion. Essentially, the fight was solo because all I had were NPCs to help me out. Thankfully, the fight was quick. Bahlokdaan was called away, lessening my disappointment.

After the fight with Bahlokdaan, the new-player story and the veteran story converge. 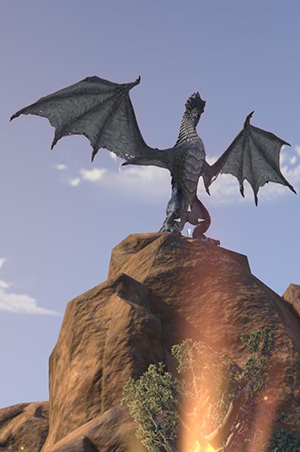 The new player necromancer really didn’t feel any different than any other class. Most of the beginning is solo content, so the necromancer skills focus almost solely on DPS. I grabbed a destruction staff, so the first few class abilities essentially just added another, more-powerful ability to my arsenal. However, I can see this class being played with a melee focus, and the first couple of abilities would help add some reach.

Necromancing gets interesting once you earn a good swath of skill points. Glancing over the skills I saw the possibility of it being an interesting pet class or a sacrificial healing class. I decided to follow the skills advisor for a Baleful Summoner. The pet class abilities had some real limitations, and I wanted to see how they ultimately played out.

Following the skills advisor, the Baleful Summoner becomes a jack-of-all-trades. About half the abilities that were suggested focused on DPS. The Flame Skull and Blastbones abilities are straight up DPS. The Boneyard and Shocking Siphon abilities add a DoT. Two of the suggested abilities, Resistant Flesh and Spirit Mender, were healing abilities. The first direct healing and the second healing-over-time.

Perhaps I was just ignorant, but the class didn’t really feel like a pet class. The Mender didn’t stick around very long, and the Blastbones destroyed itself as soon as it hit an enemy. So I added the Skeletal Mage ability to the build. This summoned an undead wizard that would blast enemies with lightning staff for 16 seconds. 16 seconds doesn’t seem like a lot of time, but given how fast the fights tended to be, I found there were times when one Skeletal Mage would follow me into the next fight before I would have to summon him again.

Overall, the necromancer looks really neat. I like the visuals for the class far more than the Psijic Order skill line from the last expansion or even the Warden from Morrowind. I also think that the necromancer build that I put together plays well into my playstyle. I like a mix of DPS and self-preservation. Although the healing and defense abilities that I have would likely seem weak to in a group setting, soloing content with a jack-of-all build makes for a very survivable class.

Before closing out these first impressions, I should explain what I actually did for the majority of my playtime over the last couple of days: dragon slaying. The tutorial and the quest “A Rage of Dragons” really didn’t take that long. I spent just as much time building my characters as I did running those questlines. I was actually kind of bored by them because they seemed predictable at this point; perhaps they improve later. What I found the most fun was traveling over the Elsweyr map slaying dragons.

We are not Dragonborn; we cannot solo fight a dragon, even the small ones. It takes a group to kill one. If you’ve played the main game, you should be familiar with the Dark Anchors. The fights have a similar feel to those, but they move. The dragons appear in about four different places on the map from what I can tell. Then as you fight them, they will leap to a nearby cliff and summon creatures to defeat you. It takes some time and a sizable group to actually kill a dragon, but it’s loads of fun.

A dragon icon will be on the map if he is spotted. Swords will appear on the icon if he’s being attacked. And the icon will appear cracked if he is near death. The bottom line is come for the story but stay for the dragon-slaying. 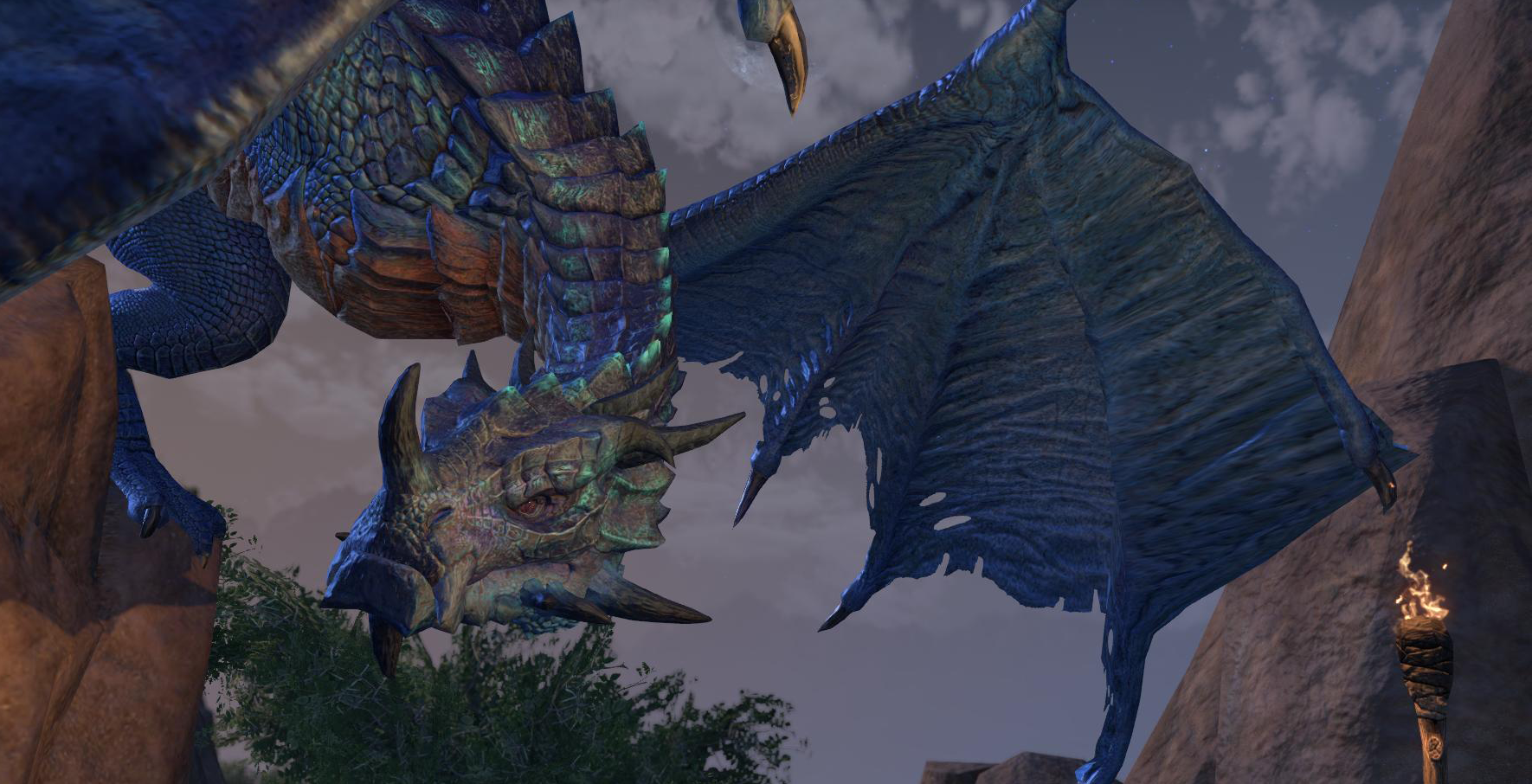 Idk what they’re calling it, is this going to be a thing (as in legitimate morphs) because honestly the DK style build possibilities are pretty intriguing.

I’d really like for them to just get rid of classes and make them skill trees. There is no reason for the arbitrary class restriction

I’m on board with that, but I would be concerned about balance issues.

I actually hate the existing pet classes in ESO. Taking up a whole 2 slots on my bar. The necromancer does it better with temporary pets. Now I have the flexibility to control how I want to DPS. I cant wait.

It is a problem a Daedra summoner mage having to use 2 abilities for the pets. Considering weapons have 5 skill unlocks, mage classes have 5 each for the other 2 specs as well. And that’s not including racial and class specific ones. Or on top of that Guild based. This game has too many skill options for 1 bar 5pts long.

And then you wish to join the game and are struck by a 20min queu that halts at 2mins each and every time. And in the unlikely event that you do get in and want to join a group, the group finder is malfunctioning. When you want to join a BG, whenever the group finder does not malfunction (read: 5% or so), you start a BG with 2 teams of 1-2 people, not triggering the countdown, preventing the BG from launching, netting you a ‘deserter’ debuff for 15mins.

But they decided to ‘fix’ it by restrict access in an attempt to improve the experience. That’s a great way to fix your issues. And then put a lovely marketing spin on it; ‘due to the extreme succes of the game and massive influx of new players’. The server was sh*t well before that ‘influx’.

Game is uninstalled. Sorry. If I wanted to play a single player game there’s far better choices out there. I paid for service and got none of it. As if this influx happened overnight, as if it takes months to set up an extra pair of servers…

I truly think they don’t have the technical ability to fix pvp. It’s amazing people still do it, I’d imagine the people that like playing/ exploiting broken game mechanics are your vehement defenders of ESO pvp

I think the ESO defenders are people who have found their sweet spot and it makes them feel good about themselves and any type of changes terrifies them to the point where they get an appointment with a psychiatrist.

Circuits and Shields is an indie ‘modern gamers MOBA’ heading to...