I have to say, I’ve made a really good choice this month. Yes, I used the word “good” to describe something Star Wars: The Old Republic-related, but I really am enjoying where the Imperial Agent’s storyline is going and even finding some delight in what’s otherwise a pretty basic tab-target hotbar combat game.

END_OF_DOCUMENT_TOKEN_TO_BE_REPLACED
When we last left our sniper Jaenneh, she was headed back to Dromund Kaas to debrief from her operation on Hutta and take up her next assignment. Almost immediately, things started going a bit sideways as my character’s headquarters was visited by Darth Jadus of the Imperial Dark Council. As one would expect, I immediately took a dislike to him, but also found him alarmingly engaging as his flat and measured speaking imposed a sense of legitimate awe and respect. Kudos, then, to Stephen Rashbrook for his performance.

The steps from there on were formulaic as one would anticipate from a themepark MMORPG, but I was extremely motivated. Darth Jadus’ influence on proceedings had me excited to find out what was next and I was beginning to come to grips with how the Sniper works. 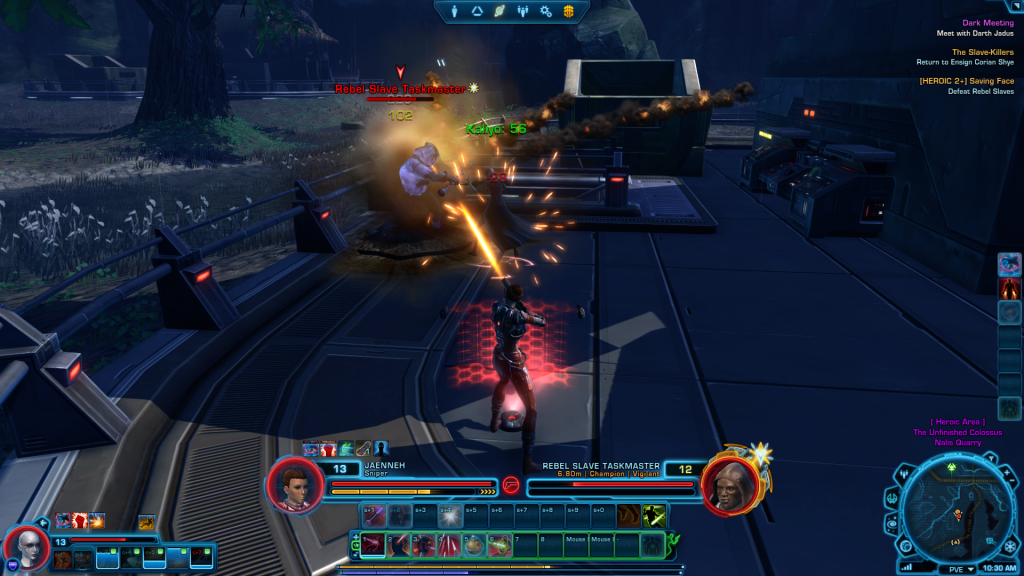 I bring up gameplay this time around because someone remarked in the comments last week that I had left that part of the equation out in my last report from the field. So, in the interest of correcting that missed opportunity, I’ll say this: The Imperial Agent Marksmanship Sniper is fun as hell.

Fun, of course, is subjective; SWTOR’s got that old tab-target multi-hotbar combat, with fights that rely mostly on timing interrupts when larger attacks are queued up by your target or taking out multiple enemies in a single engagement — if you played the game at launch, there are no surprises for you here. What feels different this time around, however, is the ability to let your companion take up the most needed role, and I have to say that, for the most part, my companion is performing her tanking duties pretty admirably.

It also helps that the Marksmanship spec tree already feels like a significant step up, adding more of what I love about the Sniper subclass. Case in point: I have a second big sniper shot button to play with called Ambush, which has some interplay between it and my original Snipe ability where use of the latter reduces the cooldown of the former. Basically, I get to drop into cover and crack off big, meaty blasts at foes while Kaliyo gets punched in the face. It’s pretty darn idyllic. 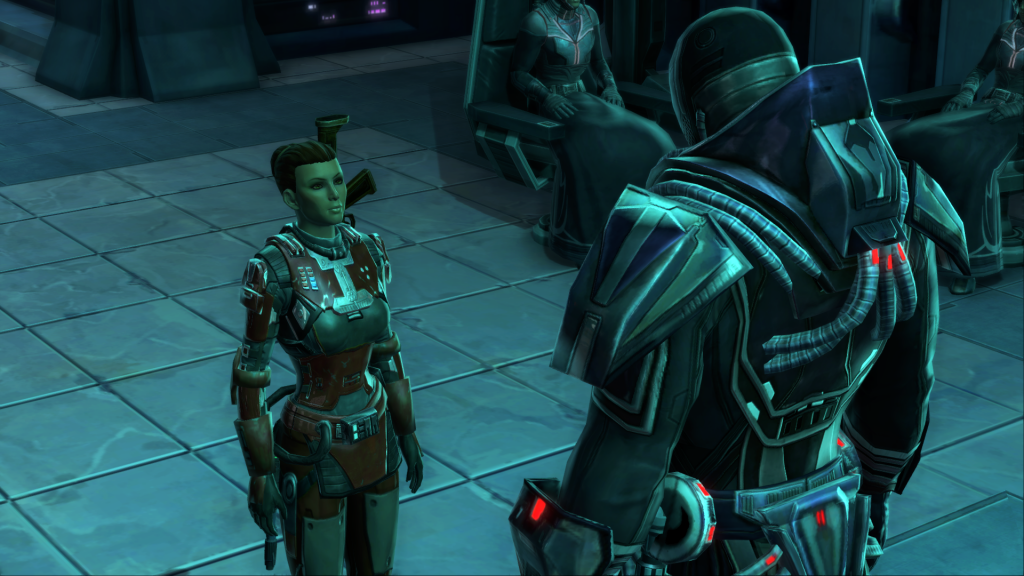 As suggested by you fine readers, I picked up pretty much every planetary mission there was as I followed the Agent storyline, especially those that ran parallel to the objectives and areas I was already visiting. With the exception of the Cult of Revan arc. That storyline is boring as heck.

Pretty much all of Dromund Kaas’ planetary missions have been experienced before, but the additional XP was certainly welcome and I can see how taking these tasks up will become mandatory as I rise in levels. What was different this time through, though, was the ability to pick up Heroic Missions — missions intended originally for a small group — and complete them myself. These provided a pretty firm challenge without being frustrating, which also had the side benefit of making me feel confident in my handling of the Sniper.

I assume, though, my ability to clear these Heroic Missions is less an indictment of my skill and more a result of tuning. These things used to be meant for groups of four, and now they’ve been scaled back. Not a regrettable event, though. I missed out on a lot of these missions at launch. 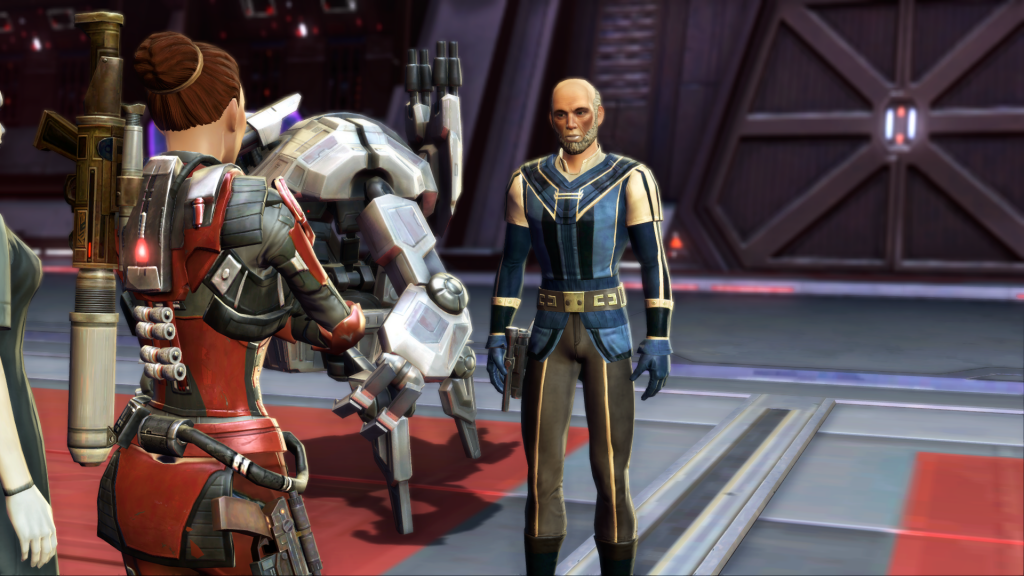 The primary motivator, as I mentioned before, was the class story. There weren’t a great number of surprising twists and turns initially, but the meanders that the story took were extremely entertaining as I pursued leads on a batch of dissident Imperial citizens. Then, all hell broke loose. What started off pretty simply suddenly saw an event that hammered home the fact that Jaenneh’s work was only beginning.

By the way, I know that I’m being vague about story details for a game that’s now eight years old, but I’m trying to not be a spoiler. Just in case someone else like me is going into this class story blind.

I also particularly liked what my commanding officer, Keeper, said about the job of Imperial Intelligence. He equated their role to sanitation workers that clean up the mess of the Empire and the Sith. It almost sounded like he was bored, but when things ramped up, he almost sounded annoyed. Again, kudos to the voice actor Francis Guinan for his work, hitting that very British form of quiet, seething agitation at unfolding events.

I truly cannot wait to see what’s on the horizon for Jaenneh, so with that, let’s get to the polling questions, shall we? 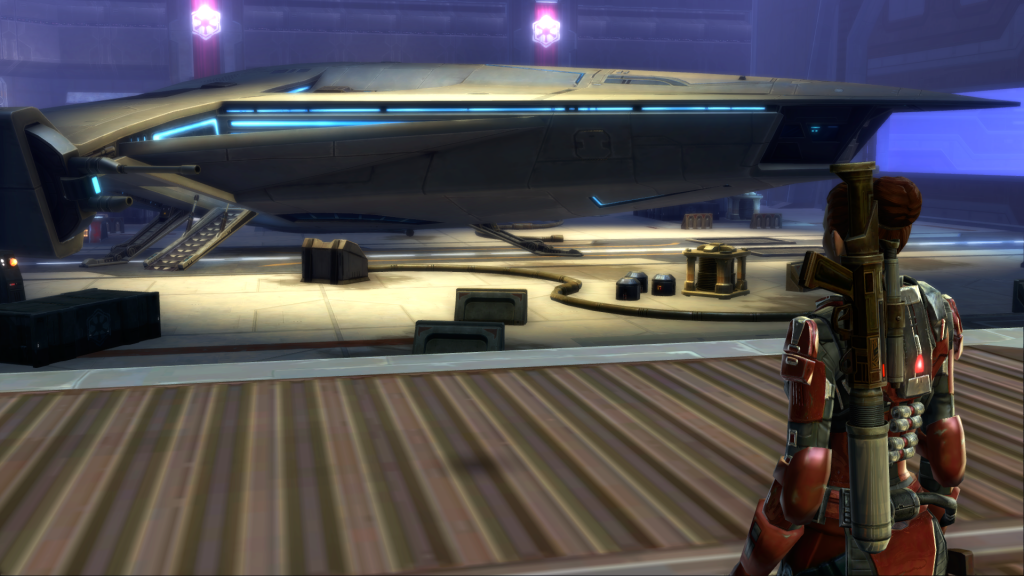 I’ve got a couple of poll ideas this time around, and I feel like I know where each one will go, but it’s always better to ask the question and learn than assume the answer.

First off is my next destination. I’ve gotten my ship and am beginning to make my way around the known galaxy, but I’m interested to know which of the two planets I should arrive to first. Granted, there’s some level disparity between the two destinations, but I’m nearly level 20 right now and so I think I can handle arriving to either location. Basically, I’m looking for which place has the more interesting Agent story beats. I leave my fate to your hands, SWTOR family.

What should be my Agent's first destination?

Next is the question of content once more. Obviously, I’ll keep on keeping on with the Agent storyline, but variety is the spice of life and so I’m interested in trying a little something on top of the visiting the themepark stops. Namely, whether I should do a Flashpoint or two, get in to a quick PvP fight, or really see if this Galactic Starfighter stuff is as reviled and awful as most seem to think it is.

What other sort of content should my Agent take up? 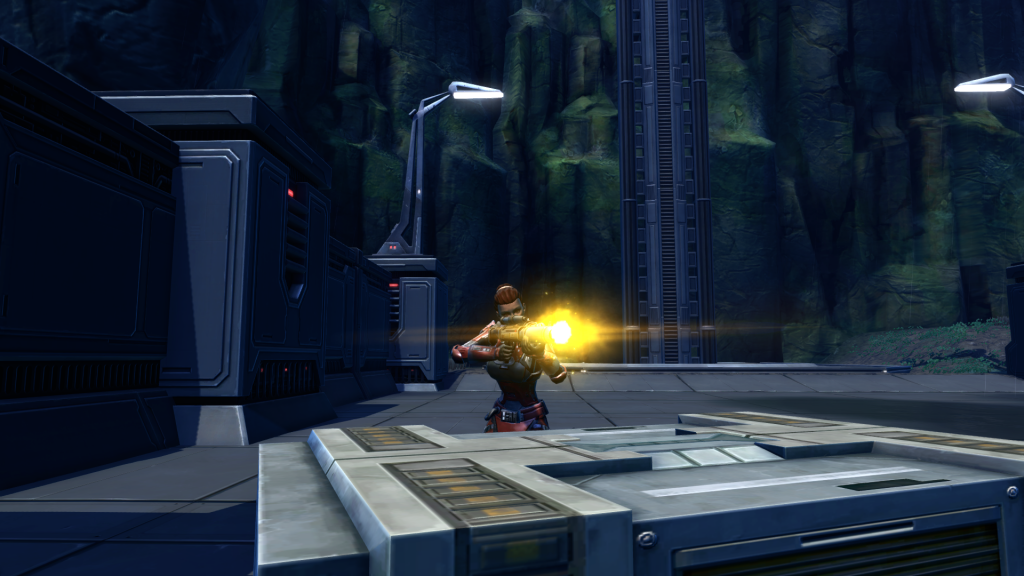 As per the usual, polls will wrap at 1:00 p.m. EDT this coming Friday, May 17th. Thanks as always for your participation and I’m looking forward to your input and the polling results!

Thanks very much for going into more details on the gameplay, much appreciated. I was particularly pleased with your remark about the heroic missions. At launch, the game was trivially easy when leveling up so its nice to know that there is at least some challenging content whilst you level, even if it is group content that has been down-tuned. It always used to be a pain to get groups for and I was only able to do all of it as I was leading an active guild at the time. If I was trying to pug it I doubt I’d have seen much of it.

I voted for PvP for next week’s adventure because thats my interest but to be honest the sniper is probably not the greatest of classes for the warzones (or at least it didn’t used to be). It’s lack of mobility made it next to useless in huttball and put it at a serious disadvantage in most other arenas too. But, if you’re low level in an old game they might leave you alone, plus the opposing jedi might not have all their leaps and stuff to get at you.

The flashpoints are definitely worth having a crack at. Whilst the content always felt easy, at times they felt like the most Star Wars-y parts of the game. A small team of heroes taking on interesting foes, fighting down corridors of industrial plants, taking on the sith, killing crazy mutants, boarding other ships….lots of cool stuff. It always bothered me that Bioware put so much effort into creating these great “dungeons” but then made the content completely redundant the instant you finished it.

Sniper was my first character in SWtoR and remains one of my favorites. The story really is exceptional all the way through, with some great twists and turns along the way.

Marksman sniper feels great to play, it has a really nice rhythm to the rotation that’s a lot of fun. That’s my alt character on Imperial side and she’s a blast.

You haven’t hit the worst parts of the narrative yet (IMO), but I never understood the love behind the Operative story. It was fine enough until it started expanding into broader conspiracies (trying to avoid spoilers as well) at which point IMO it went off the rails. But damn if it doesn’t have some of the best dialogue out of the batch, I remember the actual cutscene writing being fantastic even if I was turned off by the broader narrative.