As we’ve previously covered, employees of the League of Legends studio Riot Games walked out last week in protest over the company’s labor and harassment policies. The company had attempted to force multiple employees seeking to sue over alleged gender discrimination into private arbitration, leading employees to agitate for change. Riot initially promised that as soon as the “current litigation” was over, it would “give all new Rioters the choice to opt-out of mandatory arbitration for individual sexual harassment and sexual assault claims” and only then determine whether that opt-out would apply to everyone, meaning that current employees could be waiting years for relief, and those currently suing would continue to be shunted to arbitration.

It doesn’t sound as if Riot got the message from the walkout, whose organizers picked May 16th as Riot’s deadline to abandon forced arbitration, as the company’s most recent statement reaffirms its commitment to do basically nothing and not budge an inch while there’s a class action lodged against it.

“Ultimately, given the complexities of ongoing litigation, we will not change our employee agreements while in active litigation. We know not everyone agrees with this decision, but we also know everyone does want Riot to continue to improve. We remain committed to having a firm answer around extending an opt-out to all Rioters when active litigation concludes. Everything we’ve heard will impact our discussions when we revisit arbitration and we hope to have an answer that will be satisfying to everyone. At a minimum, we will give new Rioters the option to opt out of arbitration on individual sexual harassment claims.”

That said, Riot has been quick to assure its employees that it wants to continue to facilitate discussions on diversity and inclusion. It says it’s created a D&I Rioters Council, whose job is to proactively take actions that will share different perspectives, create change, and identify barriers and opportunities to move forward in diversity, inclusion, and culture. Secondly, a diverse group of Riot employees has reportedly been invited to express concerns about the company’s Code of Conduct. The idea is that this group will directly facilitate the changes the employees wish to see instead of Riot mandating a code without employee input. Lastly, Riot claims that it is on track with its 30-60-90-day goals, outlining the progress in an infographic. 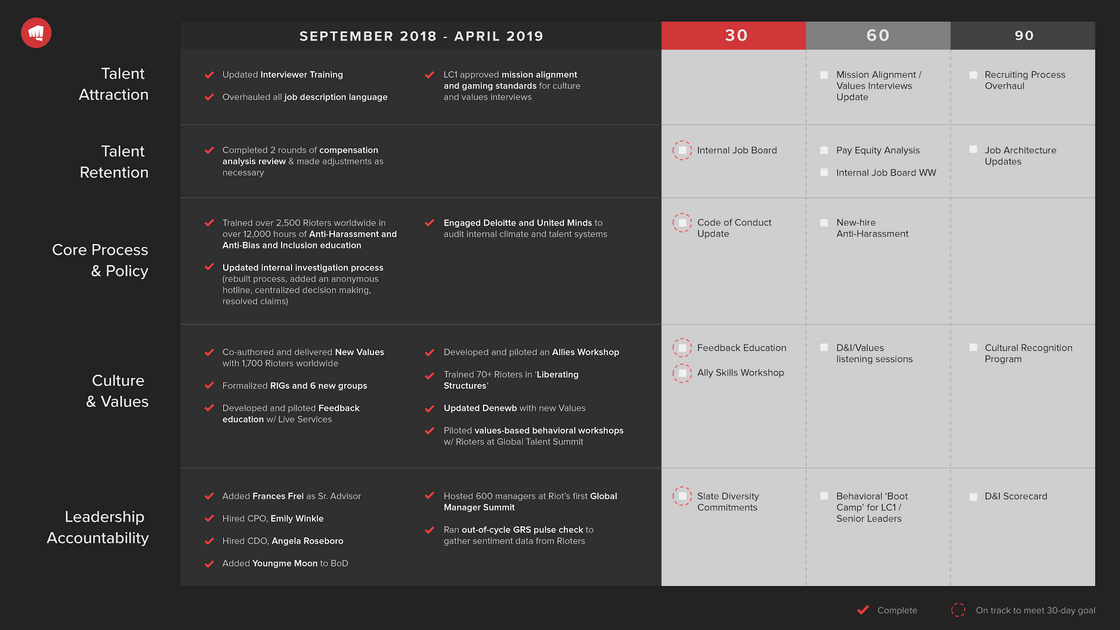 Of course, it’s not over yet. “We’re disappointed leadership doesn’t seem to be considering any major changes to their active policy. That said, we’re blown away by the passion, solidarity, and vulnerability that workers who support the walkout are showing,” one walkout organizer representative told Kotaku. “As we continue to pressure Riot to end forced arbitration, we are leveraging that teamwork and solidarity by involving more coworkers in the effort.”

Rioters Council. Yeah, sure, they’ve got the message all right.

I’ve read the Twitter feed for #riotwalkout on the walkout’s day and most tweets from Riot’s employees were like “I’m proud to work at Riot and the company has done a lot for diversity etc but will come to support my colleagues / to say more can be done”. Haven’t seen a single hostile tweet from a Riot employee towards the company’s management. Riot seems to be silently improving the relations with its employees and has a reputation of having above-industry-average employees compensation / work conditions so I’d agree with another commenter that Riot feels confident in its employee relations.

I dunno seems like a fair compromise to me. The current litigation is arbitrated and future litigation against the company they can choose to opt out of litigation instead. To me this shows they are super confident going forward that such behavior is unlikely to keep happening at the company and that should be seen as win over all.

To me this shows they are super confident going forward that such behavior is unlikely to keep happening at the company and that should be seen as win over all.

Wat, that’s what you took from this?

For example they state that new employees (IE: New employment contracts) will have the option to opt out of forced arbitration for things like sexual harassment at the “minimum” (whatever that means). It’s pretty doubtful they would take those steps if they weren’t confident in it not happening.

It’s unlikely to happen that way though. They’re just moving this into a legal blind spot…where it will be difficult to prosecute or even make them immune to prosecution. It’s a skeezy move at best and places too much emphasis on holding the company in good faith, IMO.

It already is in a legal blind spot, that’s the reason why people dislike forced arbitration. Because there’s no judge, no jury, no public.

The points of contention here is that they won’t allow previous items that are in arbitration now to go out of it and that they are still limiting what can and can’t be arbitrated. Those are fair criticisms, but also entirely one sided as the company has an interest in protecting itself as well. Even a unbased lawsuit that is later dismissed can have huge negative impact for a company, especially in an age where everything is thrown into the court of public opinion of social media.

Or they feel confident they can harass their employees into keeping all this crap under blankets.

You’re more optimistic than i am.

Of course they’re not.

If they don’t feel like listening, make them listen. That’s the whole point of taking action as a whole unit.

Or tl,dr: With fingers firmly plugged into their ears, “We can’t hear you!!!”

If these workers are that irreplaceable, they’ll win and Riot will cave.
If not, Riot will fire them and hire talent from the street that – let’s be honest – can probably replace the existing staff with little notice by the public.

You walk out, you take your chances. I know everyone would like to think they’re irreplaceable, but they aren’t, in most cases there’s someone willing to do your job for less than you make.

The worst part is walking out with no clear resolution and then trying to get hired into another gaming company without some sort of inside connection to vouch for you at the new place probably would be near impossible.

I doubt Riot will send any recommendation other than “Adequate” or “Servicable Employee” when contacted about that former employee’s history, which means another company more than likely will see ‘trouble’ walking in the door and either pass or lowball them on starting salary.

These days US employers only confirm or deny that a person was an employee nothing more.

It must be so hard to treat employees with respect. #bullying

It says it’s created a D&I Rioters Council, whose job is to proactively take actions that will share different perspectives, create change, and identify barriers and opportunities to move forward in diversity, inclusion, and culture. Secondly, a diverse group of Riot employees has reportedly been invited to express concerns about the company’s Code of Conduct. The idea is that this group will directly facilitate the changes the employees wish to see instead of Riot mandating a code without employee input. Lastly, Riot claims that it is on track with its 30-60-90-day goals, outlining the progress in an infographic.

“Your claims have been duly noted, graphically made visible, and then ignored.”

So much for “la Revolución”…

And is it still a walkout when it was an extended lunch break they got permission to do?

“The allotted time for today’s virtue signaling exercise has expired! Back to work, Rioters!”

Remember kids, whenever you use the words Virtue Signaling in any serious tone, that too, is a form of virtue signaling.

Except that I was using it in a mocking tone. The quotation marks represent the bosses addressing their employees. Since they’re all “bros”, they’re likely to use such phrases as “virtue signaling”