“In honor of Friend/Ships Month (February), the Ad Council’s national Seize the Awkward suicide prevention campaign, in partnership with the American Foundation for Suicide Prevention (AFSP) and The Jed Foundation (JED), is launching an exclusive video game partnership with Guild Wars 2, the widely popular massively multiplayer online role-playing game (MMORPG). The gaming partnership is the Ad Council’s first-ever integration within a game. During the entirety of February, Guild Wars 2’s 11 million players will receive a free Seize the Awkward t-shirt for their in-game character via the game’s gem store to raise awareness about how friends can help and support one another through hard times. The month-long effort is part of the Ad Council’s ongoing Game for Good initiative, which harnesses the power of leading gaming companies and top gaming influencers to drive awareness and impact on critical social issues.”

Yes, there’s a free, albeit unusual, cosmetic outfit in the cash shop for everyone as part of this promotion. Look under style and scroll down a few ticks. (As I type this, the cash shop database is clearly being slammed by everyone claiming the freebie at once, so have some patience.) 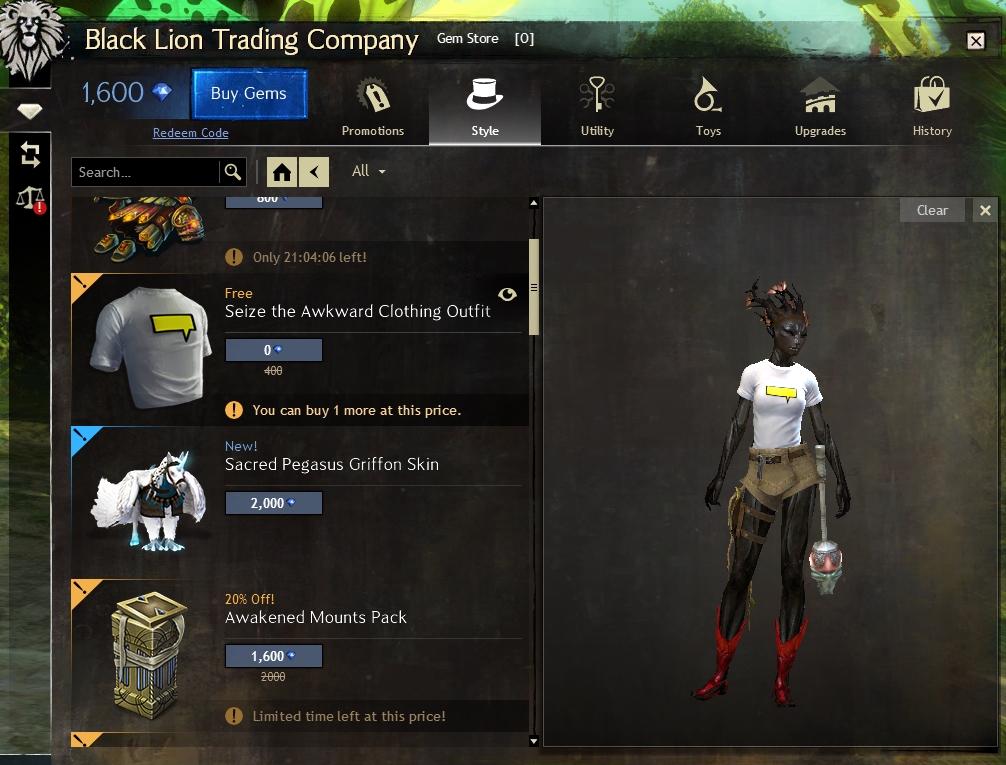 Incidentally, we’re not sure when this went in, but it looks like there’s a little gift icon on the cash shop menu now when you’ve got a freebie awaiting you. The downside is that it didn’t go away when the freebie was claimed, but that might just be an issue with the aforementioned cash shop demand at the moment. So cute, though, the lion has a present for ya.

This year, the Guild Wars 2 community will once again be “invited to share their personal stories of helping one another via the hashtags #SeizetheAwkward and #GW2Friendships,” and “players who share their stories using #GW2FriendShips are also eligible to have their own Guild Wars 2 character put into the game as an NPC (non-player character), forever immortalized in Tyria.”

I’m not so sure this is the best collaboration considering ANet is in the habit of using suicide as a tool to move the plot forward, Battle of Claw Island where your mentors off them selves, then there was the end of Heart of Thorns, Aurene killed her self because her visions told her to (granted she resurrected her self but still the plot demanded she die and she walked her self right into it).

So instead of focusing on the benefits of this program and the positive message it brings in real life, you’re choosing to focus on the fictional realm by mentioning not actual suicide but instead instances where individuals sacrificed themselves to save the lives of others others, and using that as a basis to criticize ANet for being involved.

I think you’ve completely and utterly missed the point of this very positive initiative.

It’s called missing the point in favor of your own cynical unwarranted criticism.

Again, you’re comparing the fictional narrative tool of the heroic last stand with the very real and very damaging issue of suicide, and trying to pass judgment on the company that is trying to help bring attention to the real issue in a positive way, telling them they aren’t the right company to help?

You do realize how messed up that is, right?

As some one that has worked in a hospital and has sat with people that have attempted suicide you may be surprised to know how many of them thought they were doing their family and friends a selfless service by not being a burden (they were wrong of course). Look at patients that decide to go on comfort care, they’ve basically decided to end their own lives it’s just done over an extended period of time sometimes lasting weeks while on a regiment of a Morphine drip, Fluids, and Ativan.

People that throw away their lives in sacrifice are still choosing to end their own lives. Just think now after close to 10 years and 3 Elder Dragons dead the Commander and his team of Experts could have found ways to save all of them as ANet has basically made our characters the Kormirs of GW2.

I’m not one of those guys that has a grievance against suicide either, I think it’s a personal choice that’s up to the person doing it; personally I have no doubt that if my life crumbled to pieces personal as well as financial as well as health I’d probably wind up making my self a statistic because living is not living with out quality of life.

Ignoring that this is all a fictional narrative in a fantasy setting, and heroic last stands are part and parcel of that as a narrative tool and has been across countless movies, games, and books (which, by your reasoning, means there’s few companies that would qualify to partner with a suicide prevention campaign…what amazing gate keeping you’re engaging in)…

Nah, nevermind. I was going to address the plot points themselves and how the “we could have saved them from these sudden dangerous threats that were threatening to overwhelm us if we only took the time to do so, time we didn’t have” response just doesn’t hold up for those kinds of story beats…

But instead I’ll just reiterate. You’re choosing to condemn ANet for supporting a positive social cause in real life because of choices they made in the fictional narrative in a video game.

I’m not condemning any one, I’m laughing at the irony; to be frank if you’re looking for the frothing toxic person in the room I’d suggest a mirror. Hell I’m actively playing GW2 at the moment so I don’t exactly hate them.

As far as ANet being capable of writing them selves out of those situations the only reason they need is because ‘the Commander did it”.

Do you realize that “program” made by ANet is just a tool to make them look better? Just like the rainbow flag they put on every year? Just like that awkward “friendship” campaign featuring a young girl streamer who doesn’t play the game, sponsored by an old guy? Like their “partnership” program no one cares about? That video was shared on reddit and yet it got less than 3k views, which is less than any smaller youtuber would get. Because no one cares about their “campaigns” anymore, everytime they want to make something positive it turns into an awkward weird looking shit. This is not and never was about suicidal people that need help. For those people on the video – yes, for ANet, no.

This isn’t a program made by ANet (at least not this specific element – I’m aware of the Friend/Ships thing they do…which honestly, a thing like that can be both good PR for the company while also intended to encourage positive things in the community that uses their product – it’s not one or the other), it’s them partnering with another group that is trying to bring attention to a real issue.

How damn cynical have ya’ll become to deride them for it? Geez.

Edit: Reddit has a (deserved) reputation for cynicism and hating on a lot of things it shouldn’t, why should I be surprised it got few views there?

I have to disagree, in all the instances you mentioned ANet didn’t use “suicide as a tool to move the plot forward”.