Amidst all of the other things that players have been upset about during this expansion for World of Warcraft it can be easy to miss the continued and almost baffling fight for account-wide essences. Essences add additional powers and boosts to the Heart of Azeroth, and they are vital for even reaching the bare minimum of viability in basically any combat situation… and they’re locked behind lengthy grinds, thus making them inaccessible for alts. Thus, for months, players have asked for making Essences account-wide so that alts are actually playable, with the continued response from the developers being, “Absolutely not, we will not be doing that.”

With the game’s next maintenance, they will, in fact, be doing that.

Players will be able to buy duplicates of any essence that has been obtained at rank 3 on another character with a new currency, which is available from a variety of current-patch content such as Horrific Visions and invasions. The result is that you’re still going to have to grind for currency on your alts to unlock them, but you will be able to unlock them more quickly than by fulfilling the sometimes exhausting requirements on multiple characters. It’s a move that’s met with more or less unanimous player approval, although perhaps one of the top Twitter replies summarizes the sentiment perfectly. 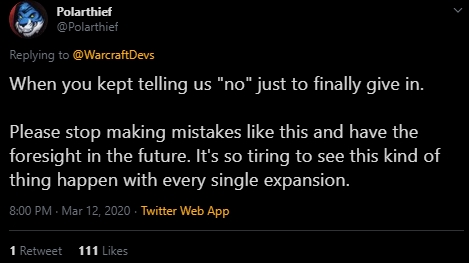 Polarthief ‘s tweet nailed it. Honestly when I think of Blizzard and WoW anymore, I just feel exhausted. I just don’t think I’ll return, I tire of the yo-yo treadmil.

Too late. I am out of the fomo loop now.

yea the dailies are for currency, not rep. same game.

They really don’t get this whole alt grind thing. If you are spending 1+ months grinding something on a main, no we don’t want to do it on an alt. This should have been either account wide unlock, or minimal cost to alts once you’ve unlocked it. Even without the neck essence grind, there is still the gear grind, the neck level grind, the cloak grind. Give it a rest.

This is why everyone stops playing between raid tiers this expansion, yet in Legion there was heaps of alt activity once the mains had cleared the raid. Grind on alts is not an incentive to play more, its actually the opposite. The quicker they learn this the better.

Seems like they just moved the grind from your alt to your main, but I don’t really play mainline WoW.