I’ve been itching to get back in and play some Crowfall, and with the War of the Gods update I’ve got a good reason: ArtCraft announced that the final class, the Frostweaver, would arrive alongside the Dregs campaign setting. It’s been months since I’ve spent any significant amount of time in game, so I figured re-rolling a character and starting over from the beginning – God’s Reach and Inflicted servers included – was going to be fun.

Honestly, I had high hopes of spending some time in this column explaining how the Dregs fit into the rest of the game’s throne war concept, but I didn’t get leveled up in time to experience any of that content. Level up in as little as two hours, they said. Not so much.

Even without the Dregs, though, I’ve got my hands full talking about the changes to the game since I’ve last played as well as what you can expect from the Frostweaver class. DPS? Check. Heals? Check. Support boons? Check. RP as Elsa while feeling the eye rolls burns through your magical tower? Check! Let’s get into it.

Damn, the UI has improved

Even though I wasn’t able to get my hands dirty with the Dregs’ guild focused PvP, I was able to enjoy many of the other updates the game has seen recently. Most notable were the UI improvements from this past February.

Removal of the survival tray is a huge shift for the player. I can see where it made sense from a design standpoint: Players doing survival activities use the survival tray, and those in combat use the combat tray. However, as ACE correctly discovered, in terms of practical use it was less than ideal. I would regularly be attacked while gathering, which will always rattle me a little, but when we also have to remember to swap sets before we can even defend ourselves, it’s much more frustrating. Now, our gathering and combat skills work the way they work in just about every other modern game. Click a tree and chop it down. Click a baddie and chop it down. It’s streamlined and the way a modern game should be.

ACE also simplified some of the skill systems as well, which is another welcome change. I can see the point of view that the simplification reduces build diversity now that players will have access to all their passives rather than strategically choosing them. On the other hand, it does ensure there is a difference between playing as a Minotaur or a Stoneborn Champion. While the passives were selective, players could have chosen ones that made these races almost the same. Now that the racial passives are always in play, there will be more differences. Regardless, if players were consistently passing up the passives for the actives, then something had to be done to bring the passives back into the game.

The Frostweaver offers some interesting playstyles

The Frostweaver is a ranged class. In close-up fights, you have some mitigation techniques, but for the most part you are going to want to keep some distance between you and anything that wants you dead.

I mentioned at the top that you can almost play the Frostweaver in any role you’d like. This actually does hold true, as long as you don’t want to melee. Now, I can’t speak to which playstyle the class is optimized for, since there’s no method of resetting your chosen talents. However, having played as a DPS Weaver and understanding how the different talents and skills play, I would say it feels very versatile, although it might be more geared as a supportive class. 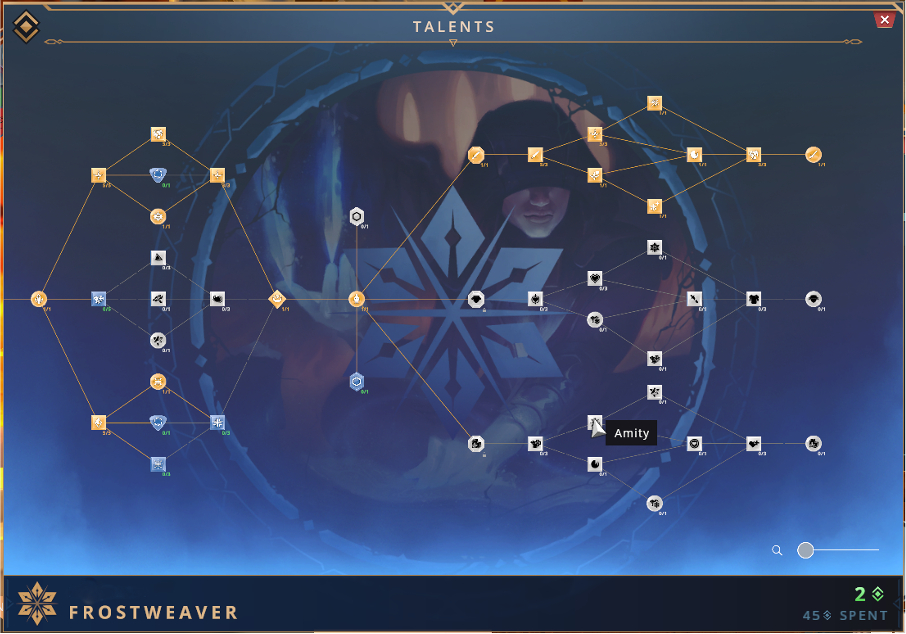 With a DPS loadout, you can speed and power up some of your skills. The talent tree offers a lot of the obviously boring improvements such as improved critical chance and damage, but it does also grant you a few perks such as a bonus ability on one of your primary AOE skills. I feel as if my damage output is pretty good, although you never really know until you get into regular PvPing.

From a support perspective, the two routes are similar but slightly modified. One tree focusing on healing and the other on armor and mana restoration. I usually jump headfirst into battles, so playing support roles has never really been my forte. However, Crowfall’s combat healers tend to be the Cleric and Druid, so adding another potential primary healer for your parties will be a welcome addition.

The class mechanics are unique

Now, the most important and unique aspect of the Frostweaver is its flavors of ice: cool, refreshing, polar fresh, frigid, volatile, and stable. They kind of sound like different flavors of gum (and I only made up one of those!). I know I’d chew down on some frigid ice gum, although volatile might work better as prank gum. You know the type I’m talking about. It’s the type you used to buy it from the back of your comic books.

Stable ice is the base form that hasn’t been turned into one of the more useful forms. They have fantasy names but basically boil down to this: healing, mana recharging, impairing, and damaging. Some of talents and skills you learn allow you to change them from one form to another, but the primary way you choose them is by making combos from the weaving skill. It’s unique and I enjoy the forms, but I can’t help but feel like they are clunky to use.

For those who aren’t familiar with the combo system in Crowfall, it works like this: Use the skill, then either use it again (if it’s loaded to your skill bar as “5” click the “5” again) or press “E” on your keyboard. So, to weave into one of these types of ice, you would cast the weave skill and then press “5” to go to the DPS ice (frigid or volatile) or press “E” and go to the support ice (cool or refreshing). Then you need to combo again to choose your ice form. So again, if you are in the DPS ice, press “5” for frigid or “E” for volatile. It’s the same with support ice: press “5” for cool or “E” for refreshing.

Now, during your chosen weave state there is a short timer when – if you cast your ice creation skill – you can create the ice you are currently weaving. If it sounds confusing and overly complicated, that’s because it kind of is. Honestly, when you get used to playing with the weaves, they aren’t so bad. But that doesn’t mean it’s perfect and shouldn’t be improved.

Personally, I’d like to see the weaving skills operate much more like Guild Wars 2’s Elementalist. With the Elementalist you have a similar situation with four distinct states of attuned elemental power (fire, water, earth, and air). However, rather than this complicated set of combos where you are loaded out for a short period of time, you simply click F1 to run fire power, F2 for water, and so on. It’s cleaner, simpler, and less prone to frustration.

That’s my take on the current state of Crowfall’s Frostweaver. It’s a fun class to play with quite a bit of versatility. I’d be interested in hearing if many of you have logged into the alpha test server to try it out and what your thoughts were. Did you enjoy the skill set? What did you think of the weaving abilities? Did you think they play well with the combo system, or would you see some kind of streamlining as an improvement?