Anyone who’s been following Crowfall over the years since its original Kickstarter has likely at one point or another felt like the game’s development was dragging out to infinity – pre-alpha seemed to have no ending. So a couple weeks ago when ArtCraft pulled the trigger and opened up its beta to the masses (well, to many of its registered players), it felt like finding water in a desert. Yet to the many players who backed the game and have been playing for years already, this was simply the next step towards the game they’ve been ready to experience with the rest of the world.

Let the bodies hit the servers

One of the most important parts of a PvP game is actually having other players to PvP against. It doesn’t matter how great your game is; without a critical mass of players, it’s going to flop. Now, what that critical mass of players is will be different from game to game. When I first began writing about Crowfall, I struggled to find anyone else to fight. However, over the last year and a half, that experience has improved tremendously, up to the point we are at now.

There is a whole new air about the game’s worlds. Compared to the alpha and pre-alpha level of engagement, the game feels so alive. Whether you are rolling a new character in the God’s Reach or joining the Infected or campaign server, there are other players all around. Admittedly, this isn’t WoW Classic newly come online with everybody lined up to level, but it is still fantastic to see.

Even when you are playing through the tutorial, it feels so much more like an actual, live MMORPG with other players around doing similar tasks as you. Seeing players in the map chat asking and answering questions – it’s just a joy. You can honestly see the game that so many players backed years ago, now coming to life.

Grappling with the concept of the crow and vessel

There is one core game aspect of Crowfall that I’ve never put much thought into previously that I would like to discuss: the crow and the vessel. I’ve understood it well enough, but now that the game is really coming together and there is a light at the end of the tunnel, I’ve begun to give it more attention.

The long and short of it is that when you play Crowfall, you are technically a crow, which is some sort of undead spirit. When you create a character, you (the crow) actually inhabit  that body (a vessel). So in parallel with a typical game, you might consider having a dozen alts as a dozen different player characters. Here, however, each is actually just a different body that you, the crow, temporarily control. So far, I can dig it – it seems like any other game with a different coat of paint.

But Crowfall takes this concept a step further with its necromancy system: literally a crafting system for digging up body parts and building a new vessel. When you’ve crafted (or purchased from a crafter) a new vessel you will then be able to use that for your next character. The point of this whole crafting system is that you could create a vessel that is a higher-tier than the starting vessels. In other words, your vessels, your characters, are just like gear. You start with weak ones and later on you’ll be able to upgrade to better ones. Are you seeing where I’m going yet?

This is the point where I begin to grapple mentally with the system. Again, this is all cool and makes a lot of sense. However, I’m not really the type of MMORPG player who keeps a bunch of alts. I create a main, and I play my games 90% with my main. Before I start to dive into a game headfirst, I do research and check out character calculators and any tools that I can find. I look at what class offers the gameplay I like the most. I find which skill tree will be my favorite. And then, after the research is done, I create my main. I play and maximize my main as fast as I can so that I can start to be competitive with it. Only then, after I’ve felt like I’ve mastered this character and this playstyle, will I begin to consider some alts.

I guess you could say my main is the driver of my engagement in the game. Honestly, I still play the main I created with the two- or three-day head start for Guild Wars 2. However, that is not an option with Crowfall. Not practically. Not if I want to be competitive – which I always am.

Playing through the God’s Reach zones, I’ll see players ask in chat, “What’s the best class for stealth?” “If I want to have ranged DPS spells, which is better Frostweaver or a Confessor?” But as a new player, there is almost no reason to care or become invested in your character because it feels rather disposable. I almost want to tell those newbies that it doesn’t matter what they pick because it’s going to be weak as a beginner vessel. That is something I am still struggling with. 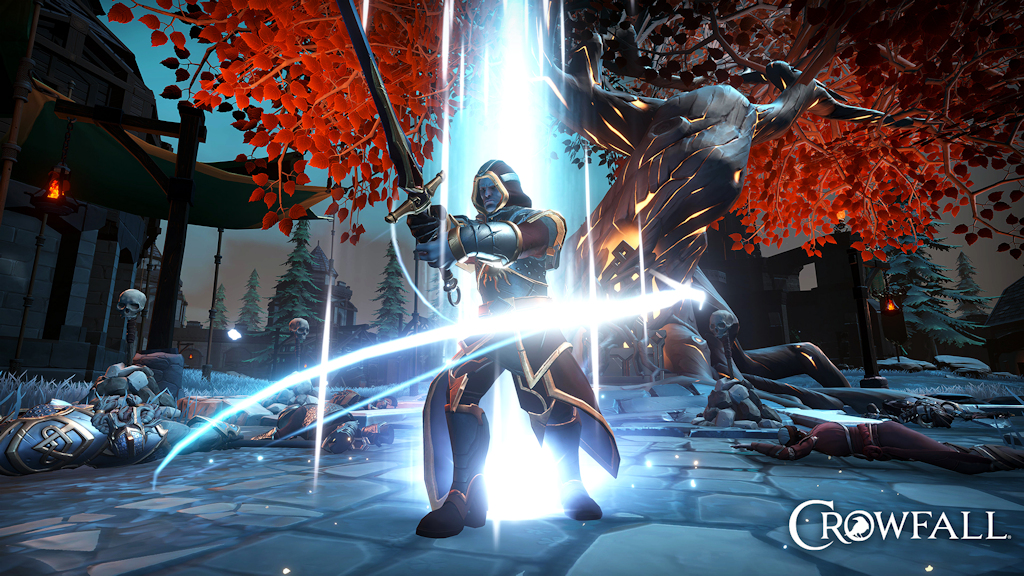 I understand what many other long-time players are surely thinking: that I could always do the same routine, then when it comes time to upgrade to a better vessel I could simply make it the same race and class as my original one. I just have to level up again. And levels are just a number, and there isn’t anything stopping me from getting all the same skills. After that, just do the same thing anytime I upgrade my vessel. Level up again, re-learn the skills. This is likely what I will do. Yet it still feels weird. The character I start the game with isn’t going to be the same one I play a year or two down the road. It doesn’t matter what I start with – it’s going to be weak. To me, that is just weird, and I haven’t fully come to terms with it.

So, crows, have you had a chance to get into the game’s beta yet? I’d be interested in knowing what players who hadn’t played in the alphas thought of it overall, from gameplay to population. I’d also like to get your input on the vessel system. I’m by no means arguing against it, but it is a different concept – for me at least! Let me know in the comments!