There’s another big content update on the way to Dauntless on September 17th, and this one has a few new poisonous tricks up its sleeve. This update is all about Untamed Wilds, and as its name would suggest, it’s focused on plant growth of the more violent and dangerous sort. I was given the opportunity by the folks at Phoenix Labs to preview some of the new content coming with this update, including its new Mission hunts and the latest Terra Escalation.

We’ll touch on Missions first, which are pretty self-explanatory in that they have Slayers taking on some tasks from the game’s NPCs. These hunts are a tiny bit different from the usual quests that players follow insofar as they have a bit more story tied to them. On the surface, they do involve going out into an area and slaying a Behemoth, but there are some initial story beats about the area of Arbourhome that offer up just a little more context and nuance above “go to an island and kill the big bad.” One of these Missions even has you racing to collect Agaric Spores to turn in for a team-wide buff before the big monster fight, which is a nice change of pace. Furthermore, both of the new Missions involve Granny Strega and Xaela the Farslayer, two of the more charismatic and interesting NPCs in the game. 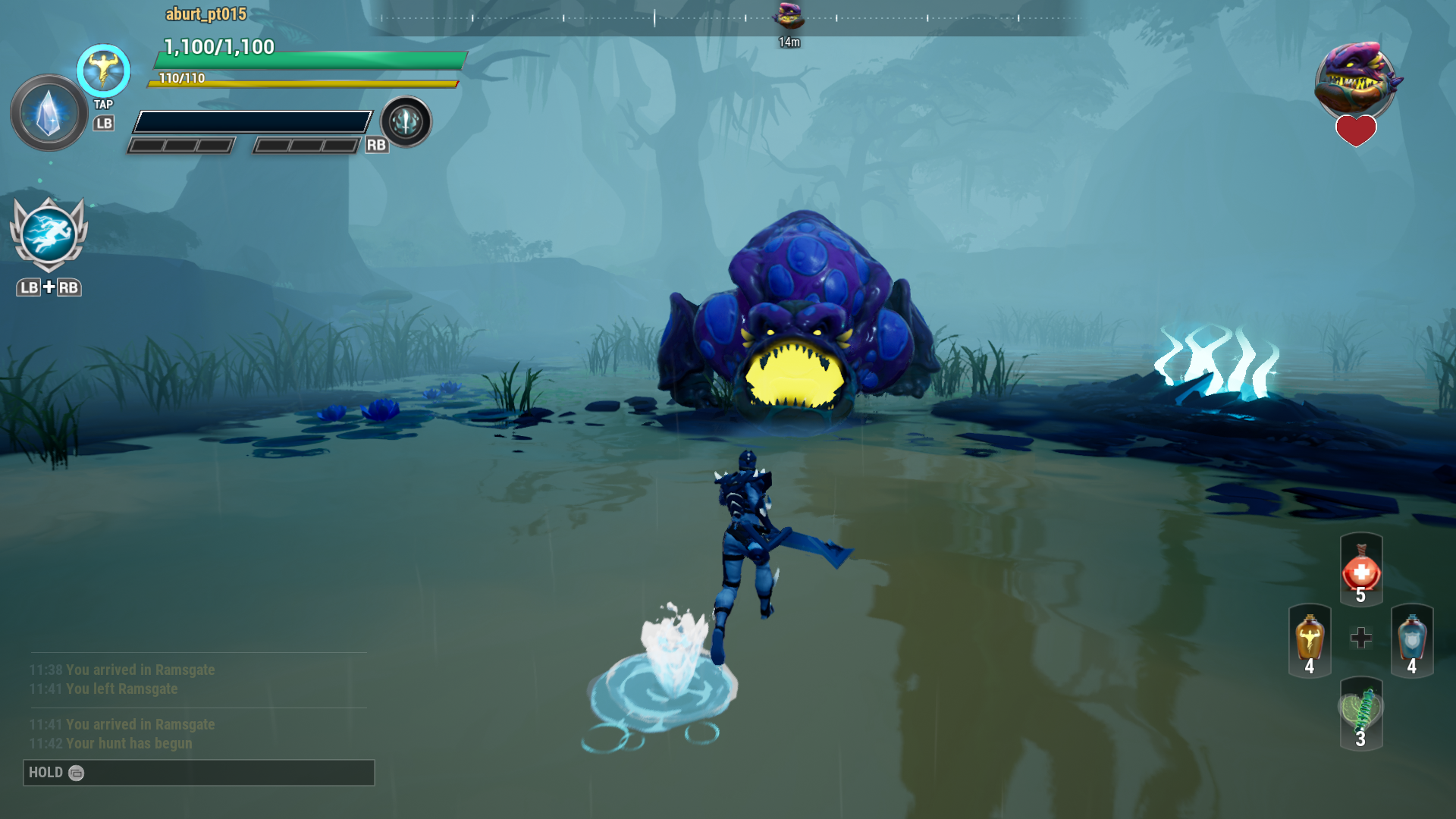 As for the Behemoth fights themselves, they involve some of the new Sporestruck Behemoths, including a poison-spitting mushroom version of the Charogg and a rock-summoning version of Embermane, each with some fun little tricks up their sleeves. Expect poison pools, summoned rock walls, poison gas clouds that increase damage taken as well as hurt themselves, and everyone’s “favorite” Terra mechanic, the Thorn Pod.

About the only complaint I could leverage against Missions is that they’re over too quickly; the update has only two of them, and fighting the new Sporestruck Behemoths is so unique and fun that I was hungry for more. Ideally, Phoenix Labs will add a whole lot more Missions in future updates, as they offer up just a little more personal motivation and detail to the world of Dauntless. 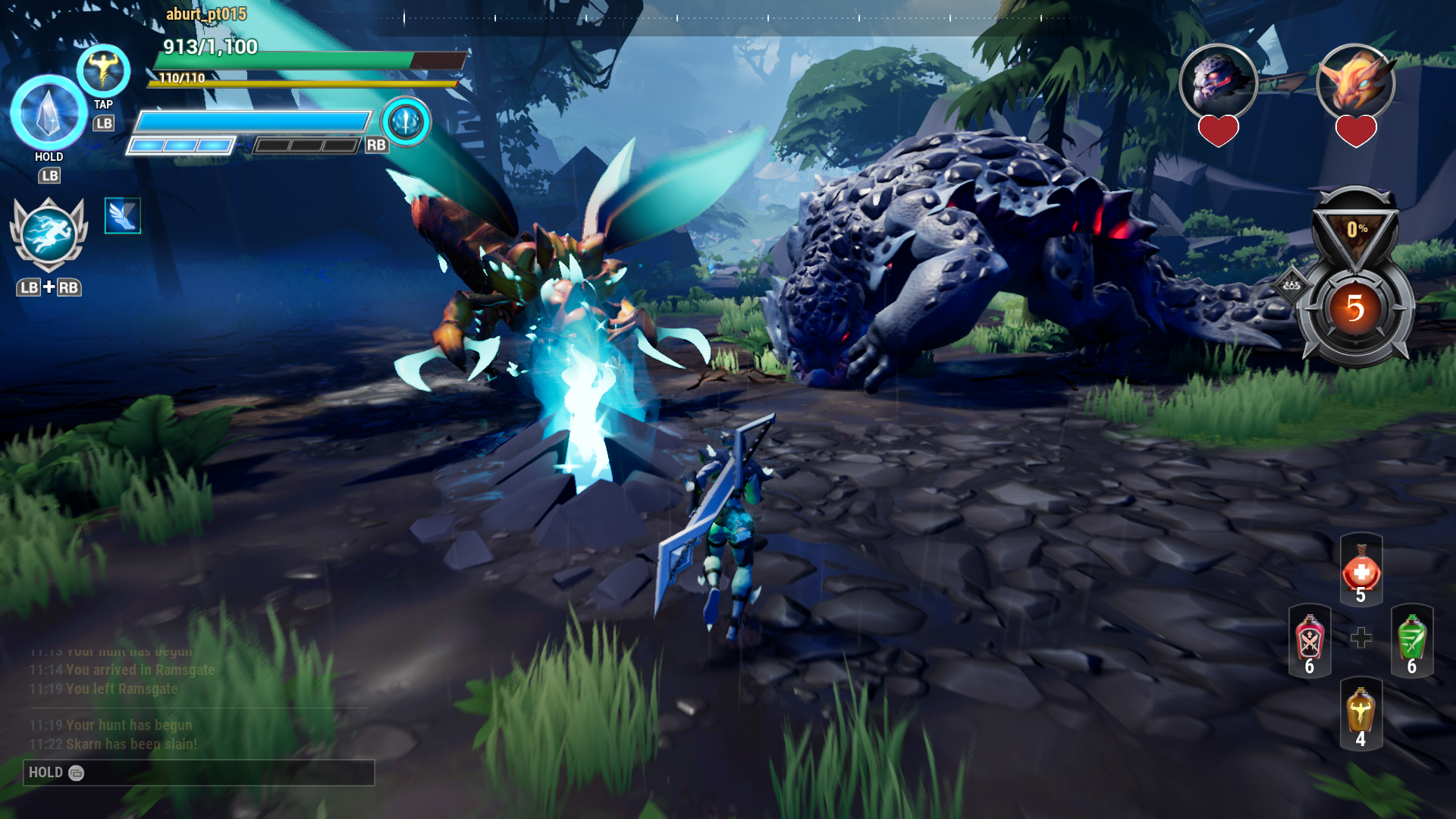 Luckily, being hungry for more Terra-infused monsters simply means hopping in to the new Terra Escalation, which runs about the same as every other Escalation added to the game to date. This isn’t a particularly bad thing in my opinion, though, as Escalations are a fun challenge and seeing the new variants on classic Behemoths is something I always look forward to facing (and eventually mastering).

As for the ultimate monster in the Terra Escalation, Agarus, that’s another matter entirely. I was joined by a couple of the devs of Dauntless to work through the high-tier Terra Escalation to take on this new foe, and it is once again another surprising monster like this past Escalation’s Drax. Agarus unleashes all sorts of attacks like poison pools, huge swinging strikes, and bullet hell-style orb attacks. Agarus is the closest this game has come to a classic MMORPG-style raid boss and also marks the first time that I’ve been legitimately unsettled by a tree monster — it’s that well animated.

This new Escalation also adds some changes to its usual progression. Before, you unlocked new Amps (boosts that are chosen at random and selectable at the end of every Escalation tier) by leveling up and progressing through the Escalation tree, but with Terra Escalation all of the Amps are included right from the very start, with the advancement tree letting players boost the effectiveness of their favored Amps. It’s a welcome adjustment.

Of course, there’s another Hunt Pass added to the game as well that follows the overall theme of alchemical science, with this season’s skins all about fancy scientist wear and weapons bristling with hypodermic needles. It’s a bit of an odd design choice, but for those who are truly skeeved out by needles, it’s likely going to give you pause. Especially the War Pike. Yikes. There’s also a new consumable that will help with the new poison pool mechanic… but you’re going to have to get through Agarus first to unlock it.

All in all, the Untamed Wilds update features another round of content I enjoy and a couple of new steps towards more interesting territory. The devs want to include more story in the game’s quests with Mission hunts, and I absolutely agree with the idea, as I want many more Missions in the future.

Vague Patch Notes: A look back at my start in Final...

Lost Ark’s Destined for Destruction drops the Destroyer and Deskaluda

Flyff Universe can now be accessed via a browser, plans to...