Thank you all for letting me close out this month with some Dauntless because I seriously love this game so very, very much.

I’ve been following this game pretty actively since its final closed alpha all the way up to now, watching it develop in to the title that it is now, so to say that I’m emotionally and mentally invested is an understatement (never mind monetarily as well). But now that I’m focused on it for the purposes of this column, I am given the opportunity to perhaps explain why I like it so much. 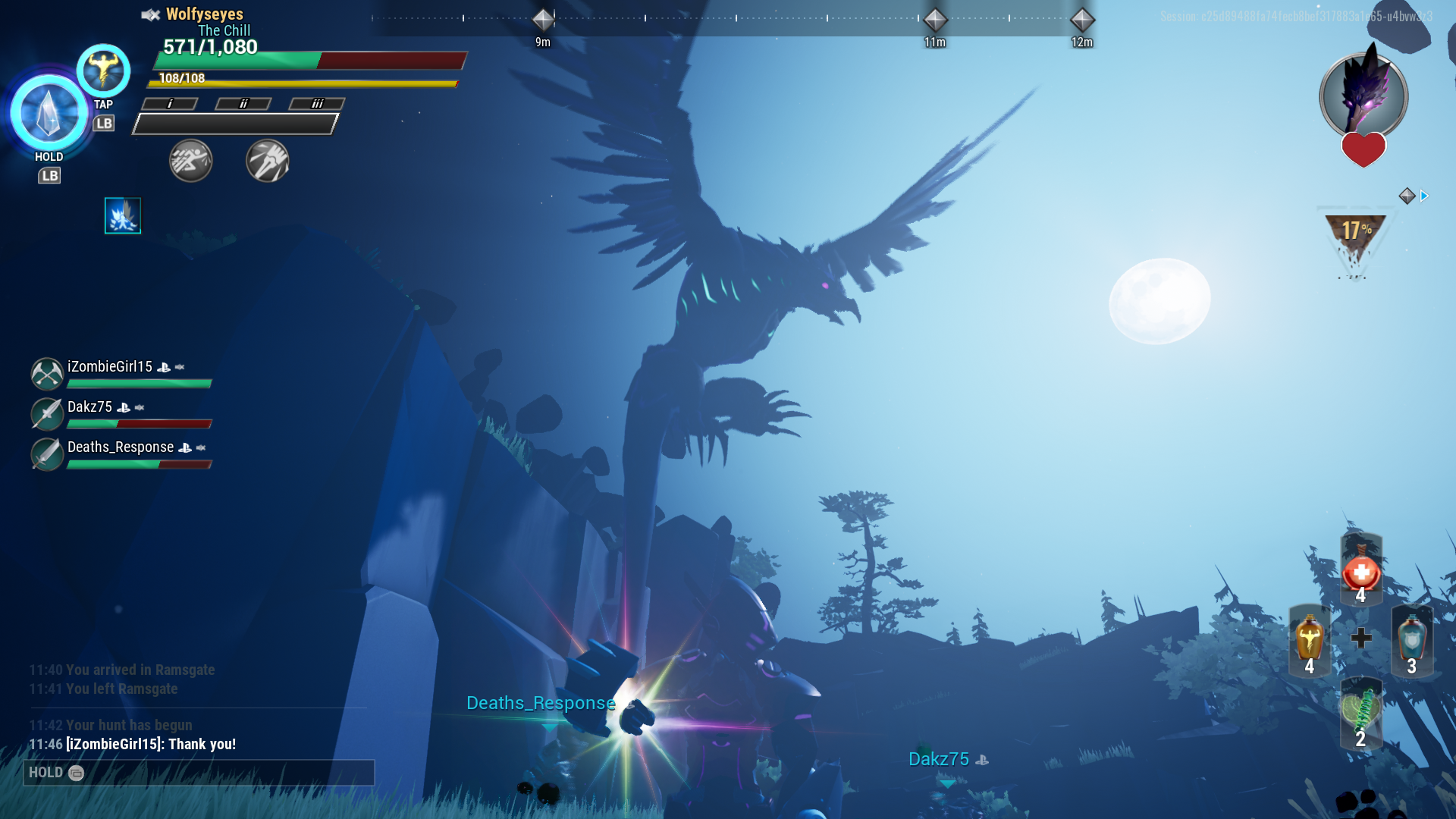 The root of my enjoyment certainly stems from my love of the Monster Hunter franchise, for one. I cut my teeth on that series with Tri — on the Wii of all systems – and was pretty much engaged from the start, even when I hit walls in terms of progression. So with that in mind, the very basic beats of Dauntless immediately speak to me; go out, fight an extremely tough and unique monster, harvest its parts for new gear to take on harder things.

From there, though, I can consider the fact that Dauntless does these things far more approachably as why it lives in my head. Sure, I’m pretty certain that Shrowd would lose in a fight against MHW’s Fatalis, but I’m also past the point where I’m trying to flex my gamer muscles on the World Wide Web here. And the Behemoths of Dauntless put up plenty of challenge for me without feeling like I’m trying to climb a sheer cliff face with only my teeth.

Another mark up for Dauntless is its personality. The monsters in this game are really unique and fun, the characters of its world are very often charming, and the emotes and personality that’s present through its presentation is leaps and bounds above what I’ve experienced before in this type of game. Being given the opportunity to arrive to an island cinematically with a faceplant, running up to a ram in town to headbutt it, and doing a death drop as a post-hunt celebration are things that really make the charm of Dauntless stand out from its contemporaries, to say nothing of its graphical style and color palate choices. 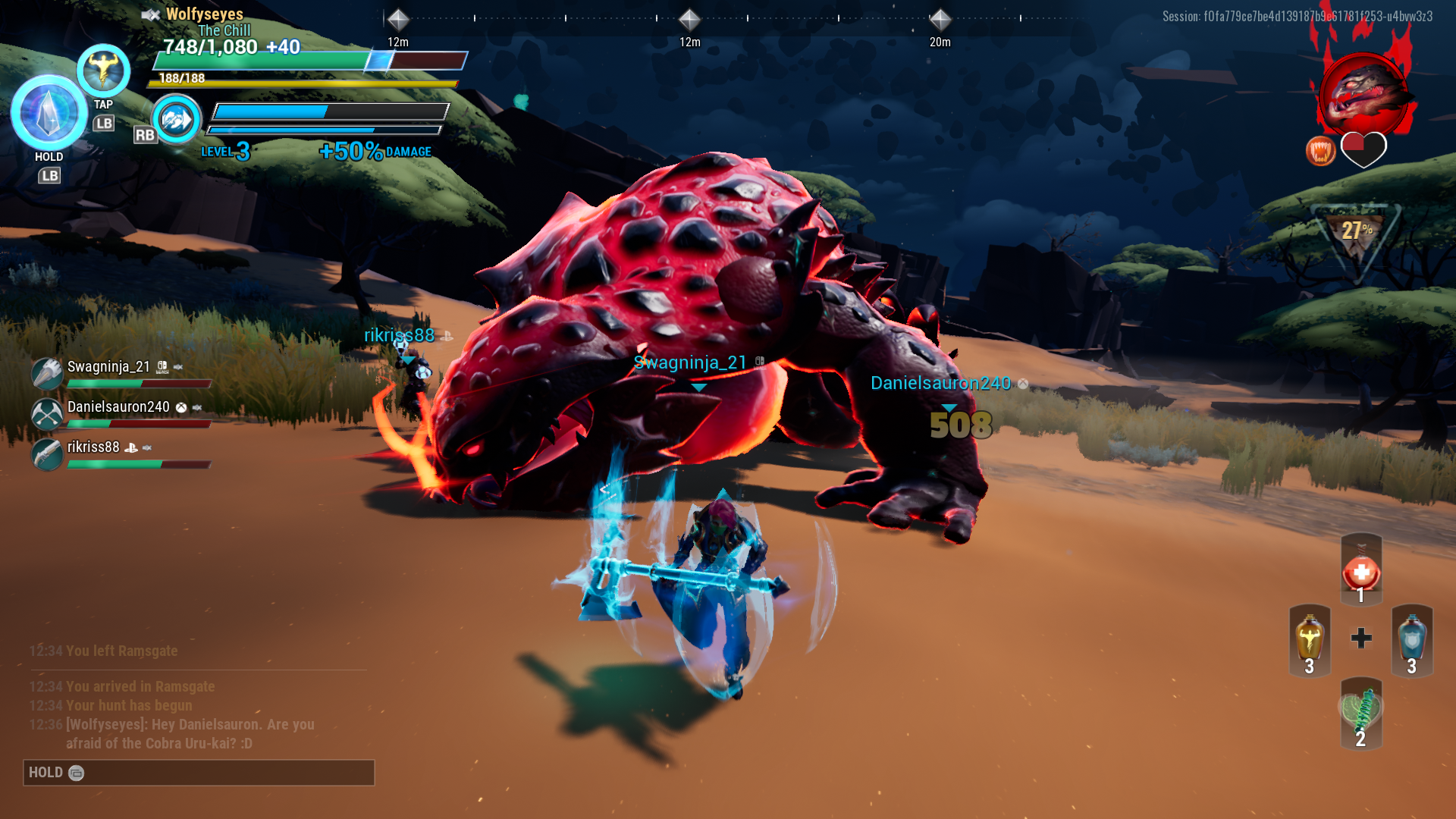 Of course, the actual activities in Dauntless are what keep me coming back. There are a few chases here, whether it’s weapon or overall Mastery levels, gear sets, legendary weapons, or even the Trials. Out of all of these, though, clearing Bounties and climbing up the ranks in Escalations are easily some of my favorite things.

Bounties are pretty basic tasks that range from killing a certain type of enemy to using a certain weapon to collecting a specific number of items while out on a hunt among a variety of other objectives. Each Bounty arrives in either bronze, silver, or gold variants, which not only require increasing numbers of successful objectives but also reward Hunt Pass XP in increasing amounts. It’s a really simple carrot to run after, but often is a fun one, especially when you wait a bit to gather enough bounty tokens to keep the train a-rollin’.

Of course, the fact that Bounties link to the game’s Hunt Pass battle pass mechanic is nice, too, and with only a few exceptions I’ve always found the Elite track of the pass to be more interesting than not. Many of the cosmetics on offer are extremely fun to chase after. 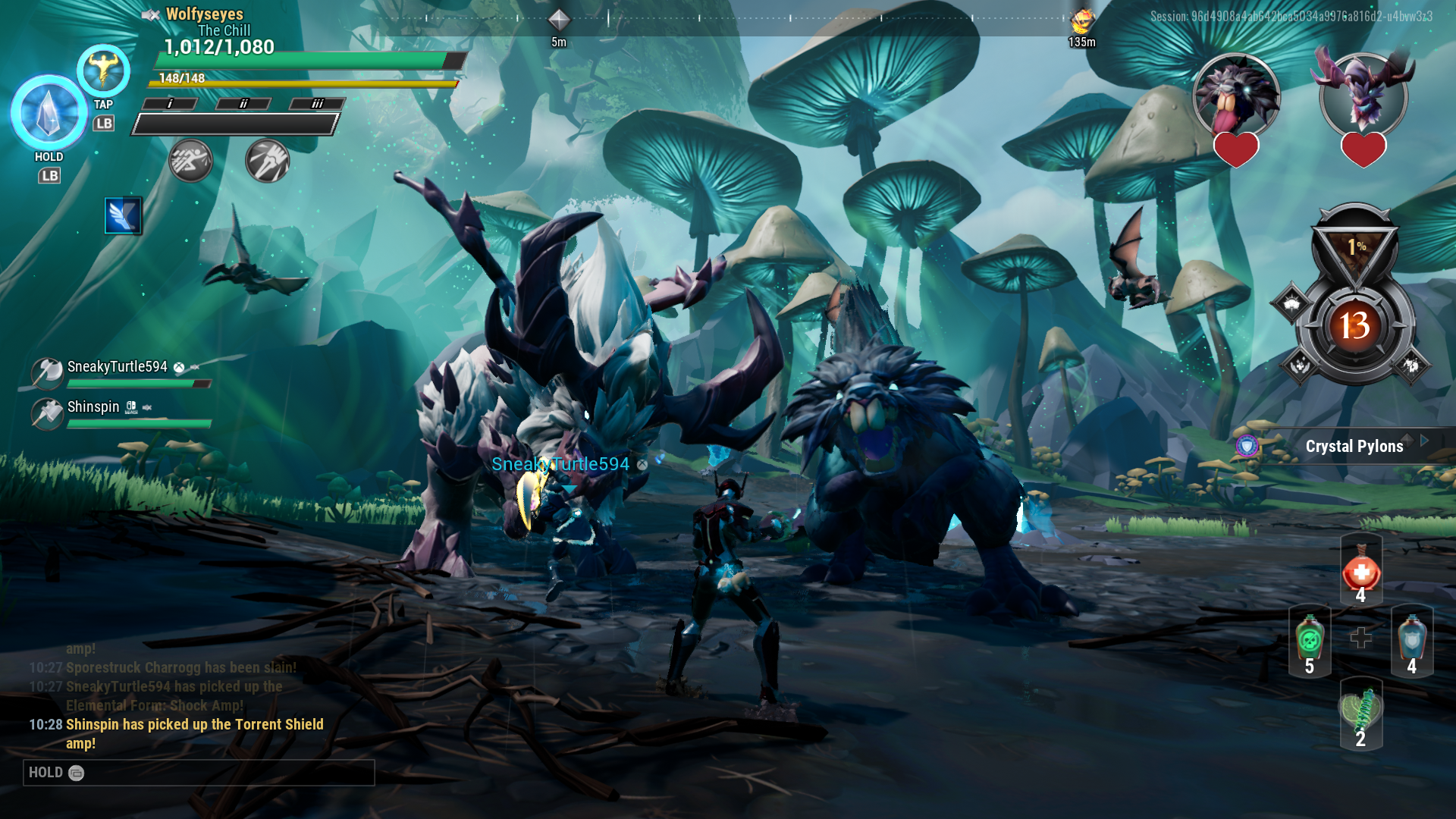 The top of my activity list, though, is the Escalation. Bounties can sometimes link to what I’m doing here, but often they are associated with doing patrols or gathering things out in the world. The Escalation is both a fun challenge and an engaging mode in its own right, giving me reason to play when my Bounty Tokens run dry.

For one thing, Escalation is basically boss rush mode, and I absolutely love a good boss rush. Add unique wrinkles like environmental effects, different types of well-known Behemoths, or fights that feature two monsters in the same arena, and you’ve got an extremely addictive recipe for me.

For another thing, this mode is often where some of Dauntless’ most unique and enjoyable monster fights reside, particularly with the recent additions of the Drax and the Agarus. These are very much akin to MMO raid bosses in terms of unique fight mechanics, with attacks that are unlike anything one can find while out on patrols and personality to spare. Seriously, Drax laughs at your misfortune and the Agarus is the first time a tree monster unsettled me.

Obviously, things aren’t always perfect here. I would love for there to be a new mode or two, I would love for the top end of the “regular” game to see new monsters, and I would really like the Escalation Behemoths to make their way into the regular rotation. Also, the recent rework of the sword only makes me hungrier for more weapon adjustments. And as I mentioned in my preview of the quest type, I would really like for there to be a whole lot more Mission quests. In fact, I’d rather these replace the usual quests in the basic progression. But then, the fact that this game is looking to adjust, adapt, grow, and try adding more things is ultimately one of the best reasons I keep playing. 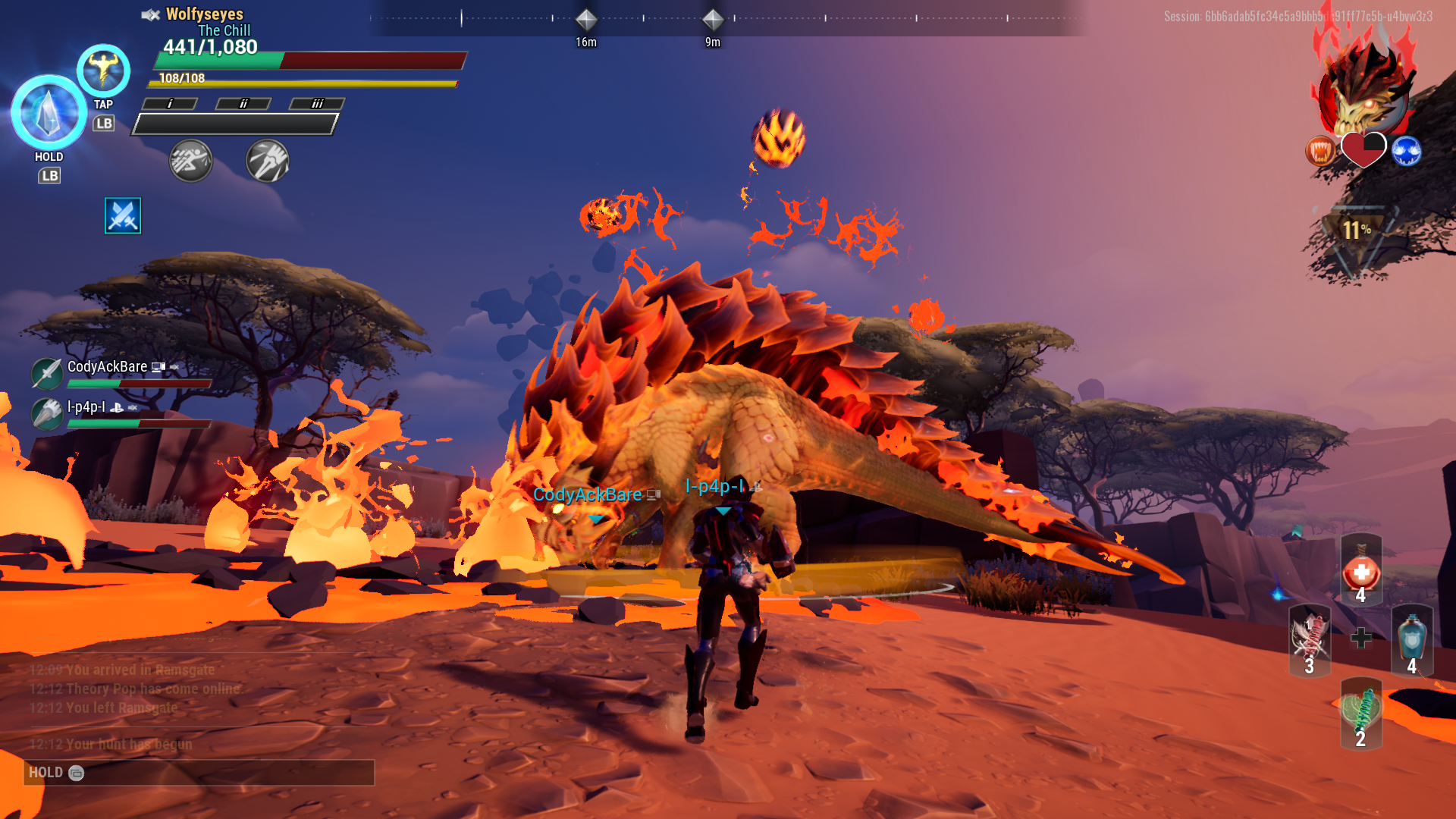 There sometimes feels like there’s a perception that Dauntless is the discount Monster Hunter and that makes me sad, especially when this type of game could always use more new games and not less. In fact, I refuse to zero-sum the two; I can look forward to what Monster Hunter Rise is going to do while at the same time eagerly watch Dauntless grow and evolve and add more. More hunters are always welcome.

But while that won’t be it for my monster slaying in this game, that’s it for this year’s Not So Massively Mix. So with that in mind, it’s time to look forward to our next title, which is No Man’s Sky, a game that just won out over the other choices. A surprise, to be sure, but not an unwelcome one. I’ll mostly focus on exploration for the first week, but future polls will have you steering our ship to different activities. But first, we have to decide the kind of experience we’re having in this game’s universe, thus this week’s poll:

What game mode should we run with in No Man's Sky? 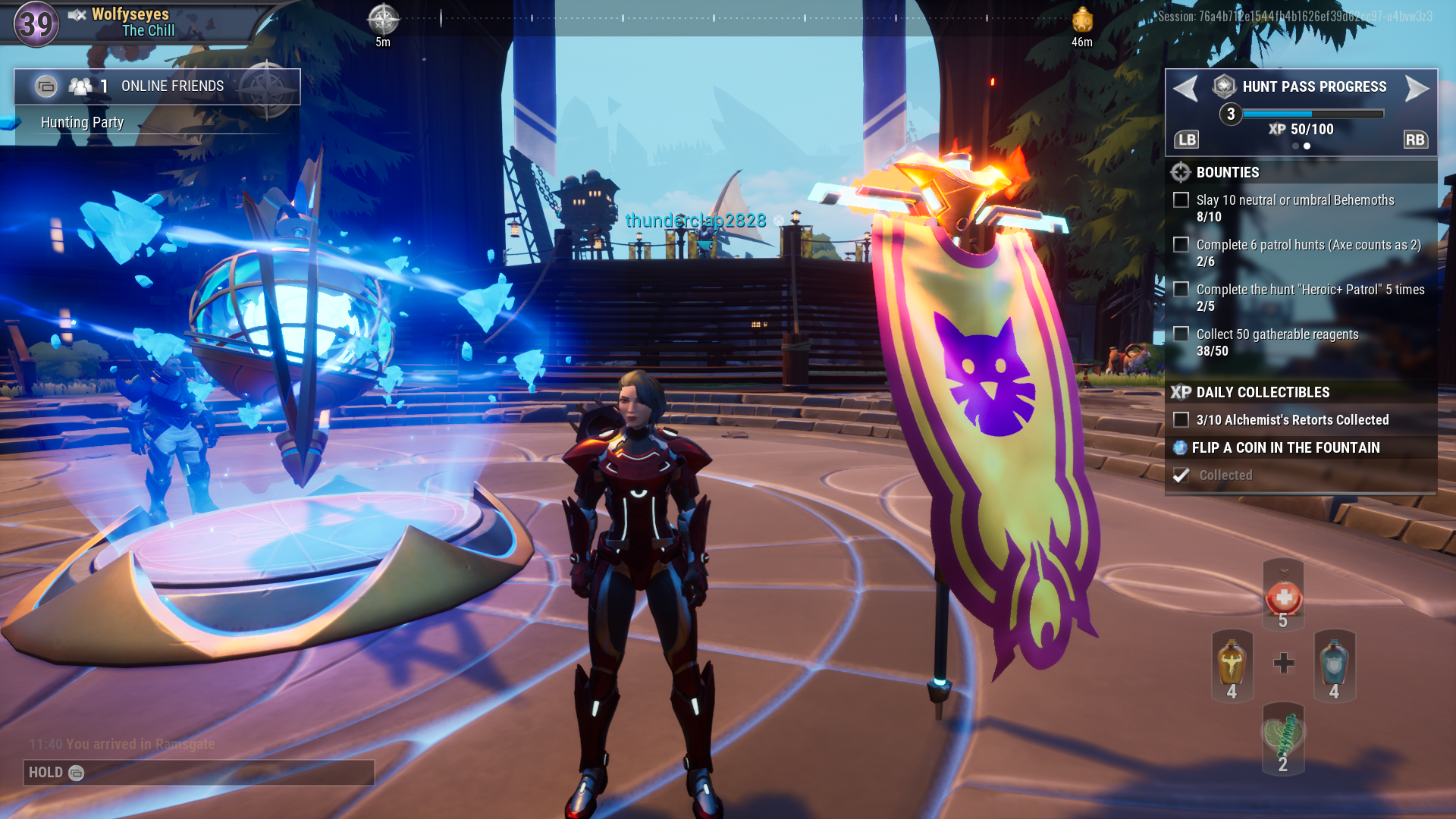 As usual, polling wraps at 1:00 p.m. EDT on Friday, October 30th. And if you happen to see Wolfyseyes the Chill out on your hunts, maybe say hey.

I love Dauntless. Monster Hunter is a great game, but it’s too much time investment for me. I understand why people love it, but I can appreciate the simplicity of Dauntless a lot more, especially as a person with limited time and energy. It’s an easy game to pick up and put down. They’re both really good games, it just depends on what exactly you’re looking for.