If you thought the large list of improvements in patch 2.3 was all that we’d be getting before the upcoming official launch set for June, you’d be mistaken. And it’s nice to be wrong sometimes! Patch 2.4 is bringing a host of new features, with improvements from the ground up all the way to the sky. This includes two new landmasses with new biomes, new enemy races, and a new religion. Say hello to the spitting spider god! Oh, and there’s a greater emphasis on buffing up the PvE offerings, such as a new NPC camps, points of interest, and an all-new boss summoning mechanic. On top of all that (pun intended), the world has been brightened to allow more sunlight to filter down. Why should shipwrecked Exiles have gloom with their doom all the time? Shiny Happy Exiles could totally be a thing.

Here’s the best part: You don’t even have to wait long to get all this goodness. Ready or not, all that fun stuff is slated to release on all platforms tomorrow, April 22nd. I am ready!

Ahead of tomorrow’s launch, I toured the Isle with Lead Designer Dennis Douthett and Senior Content Manager Tor Egil Andersen and experienced the new features for myself. And I’m looking forward to sharing them with friends.

Scratch that — there is sunshine on Siptah! One thing the Isle has been known for was being dark and gloomy. Players ended up wrecked there because of a storm, and they never really escaped it; the many storms over the island kept it in a near constant state of darkness. Yes, it was pretty thematic, but it was also very dreary. Things are definitely different now. Even before Andersen pointed out the extensive improvements to the lighting and details, I could tell how much brighter it was. Check out a before and after shot: 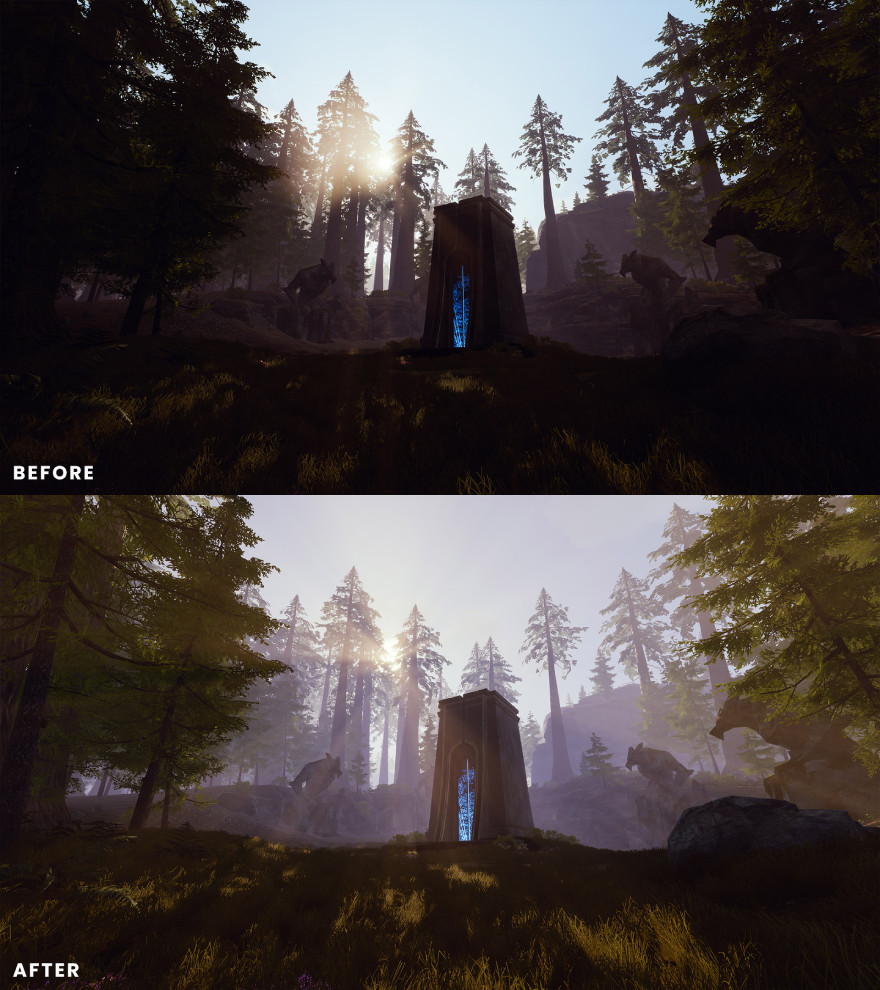 With that additional lighting chasing shadows away, the world appears more detailed. All over the island you can see the improvement. But why relegate yourself to just the known island? You can use the added sunlight to explore the new landmasses!

Along with those two landmasses, Siptah has three new biomes: ashlands, floodlands and savannah. Each has its own visual style with additional enemies to encounter. During the tour, one place we wandered through was Sipho’s Shipyard. Among the plank walkways and docks I found an unsavory jailor. He wasn’t long for the world after we met, and since he didn’t need his key anymore, I used it to free one of the captives from a cage. Now this is the way to get new friends! I expect to visit here and set many a captive free; seriously, I prefer the rescue method for getting thralls as opposed to the bash and wheel of pain version!

As we continued the tour, I got to visit the Fractured Citadel and enjoy the lovely new inhabitants there. There’s a little bit of zombie apocalypse flavor going on inside there, but I didn’t get to delve too deeply and see what other fun was lurking.

Enhancing PvE: Bring on the bosses

Up until now, Isle of Siptah has been very focused on its PvP aspects. But that doesn’t mean that’s all devs had planned. Besides running me to a number of new points of interest and NPC camps and introducing their bosses (when you meet Ridrik the Mad, tell him I said hi!), Douthett showed off a major new PvE mechanic. Called The Pools of the Grey Ones, this special device includes a pedestal and a large shallow pool. Put a special statue on it and you summon forth a massive boss to fight! These bosses have some spiffy and unique loot, so they are worth player’s time. We also called a couple of flaming bull things. Sorry, I was too busy shooting arrows to get their names!

Have you wondered what becomes of the exiled NPCs who are pulled to Siptah? Well, they’ve made themselves a few little camps you can visit. These folks become a little twisted during their magical portal journey, however, so be prepared for plenty of mad laughter. 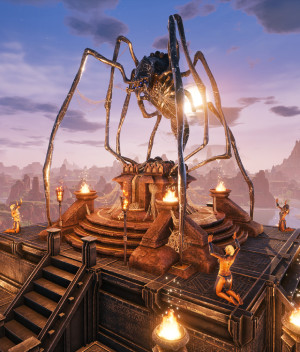 I saved this one for near last to help out our arachnophobe friends. I’ll warn you now, things are about to really get worse in game!

One of the big new changes coming is the introduction of a new religion, the cult of Zath. And along with the new religion comes a new god avatar to summon. (To summon, you start a massive rainshower of spiders!) This guy is a big freaky spider that spits acid. So for all you folks who built your fortresses high on cliffs to keep the other avatars from stomping your bases, you’ve got a new worry now! I even saw one of these guys decimate a cliffside castle.

Even more fun/not fun is that when you summon this monstrosity, it will occasionally do a little shimmy that then spreads a circle of little black goo bombs around it. If you’re an enemy and you get near them, prepare to be swarmed with lots of little spiders! If you are a friend, well, lucky you – they will leave you alone.

Speaking of spiders, the avatar isn’t the only one who summons little spiderlings to help out. Players also have access to a little black goo ball they can throw down, at which point it then morphs into a slick black spider ready to follow and fight for you. Even better, this spider does not count against your follower count, so it’s just an added friend to toss in the fray.

One feature that the devs introduced on the tour but that didn’t get finished in time for this next release is map transfers! We are talking about taking your character and all its inventory and feats and hopping between various servers and maps! Players have wanted this ability for ages. It’s a feature that ARK: Survival Evolved has for maps within the same cluster, but Conan Exiles won’t have any such restriction; players will be able to go to any server they have access to that has this transfer stetting enabled, including personal servers and modded maps. Then they can hop back home. Douthett explained there will be a cooldown involved (such as 24 hours) to prevent griefing, though the time will be tweaked and balanced. Although this feature isn’t ready for patch 2.4, devs assure it will be in place before the full launch of Siptah tomorrow.

The friction between Conan’s brutal world and MJ’s optimism and cheery outlook is absolutely delicious! 😅

I can never equal Chris’ enthusiasm for 8 huggy legs* though!

*reference to meeting a spider on an ARK stream hehe

Oh boy, I think I need to hit the archives! 😄

This game has the scariest spiders ever. Did not finish any spider dungeons or cave because of that. Still love it and I’m waiting for them to finish this new map to play it again.

Awesome! I’ve been waiting for this, really looking forward to it. :)