It’s funny: The last time I paid a visit to Neverwinter, it was to check out a revamp of the new player experience. Here we are again, with a much more extensive overhaul of the game’s leveling courtesy of the Jewel of the North update. This time there’s also a new class in the form of the Bard.

END_OF_DOCUMENT_TOKEN_TO_BE_REPLACED
The last leveling revamp left me unimpressed, but this time the changes are a lot more ambitious. Let’s dive in, shall we?

First, let’s talk about the Bard, the first new class for Neverwinter in many years. I will admit I was not particularly enthused with the idea of this class. I like Bards well enough when I’m playing tabletop D&D, but I feel they tend to be an awkward fit for the less role-play focused realm of video games. But a new class is a new class, so if I’m going to be checking out the new leveling experience, I figured I might as well give Bards a whirl too.

To my surprise, I ended up finding it a very fun class.

Cryptic’s solution for making the Bard work in an action game like this is to give it a strong emphasis on swashbuckling swordplay. Roughly half your skills are about wielding a rapier to lunge and slash at enemies. For the 5E players out there, basically you can think of Neverwinter‘s Bards as belonging to the College of Swords. The mix of agile rapier moves and flashy magic also feels quite a lot like a Bladesinger, actually.

Neverwinter is noteworthy for being one of the few games where I didn’t enjoy playing a Rogue at all (Rogue is normally my go-to class in most RPGs), but the Bard at last provides that swashbuckler vibe I usually get from Rogues.

All that’s not to say the musical or magical sides of the Bard is neglected. The class gets access to a number of magical attacks — flashy, with a pinky-purple style reminiscent of the Guild Wars 2 Mesmer — and as for music, their class mechanic focuses an entire Guitar Hero-style minigame you can use to play songs, each of which provides different effects that can range from buffing allies to damaging enemies. 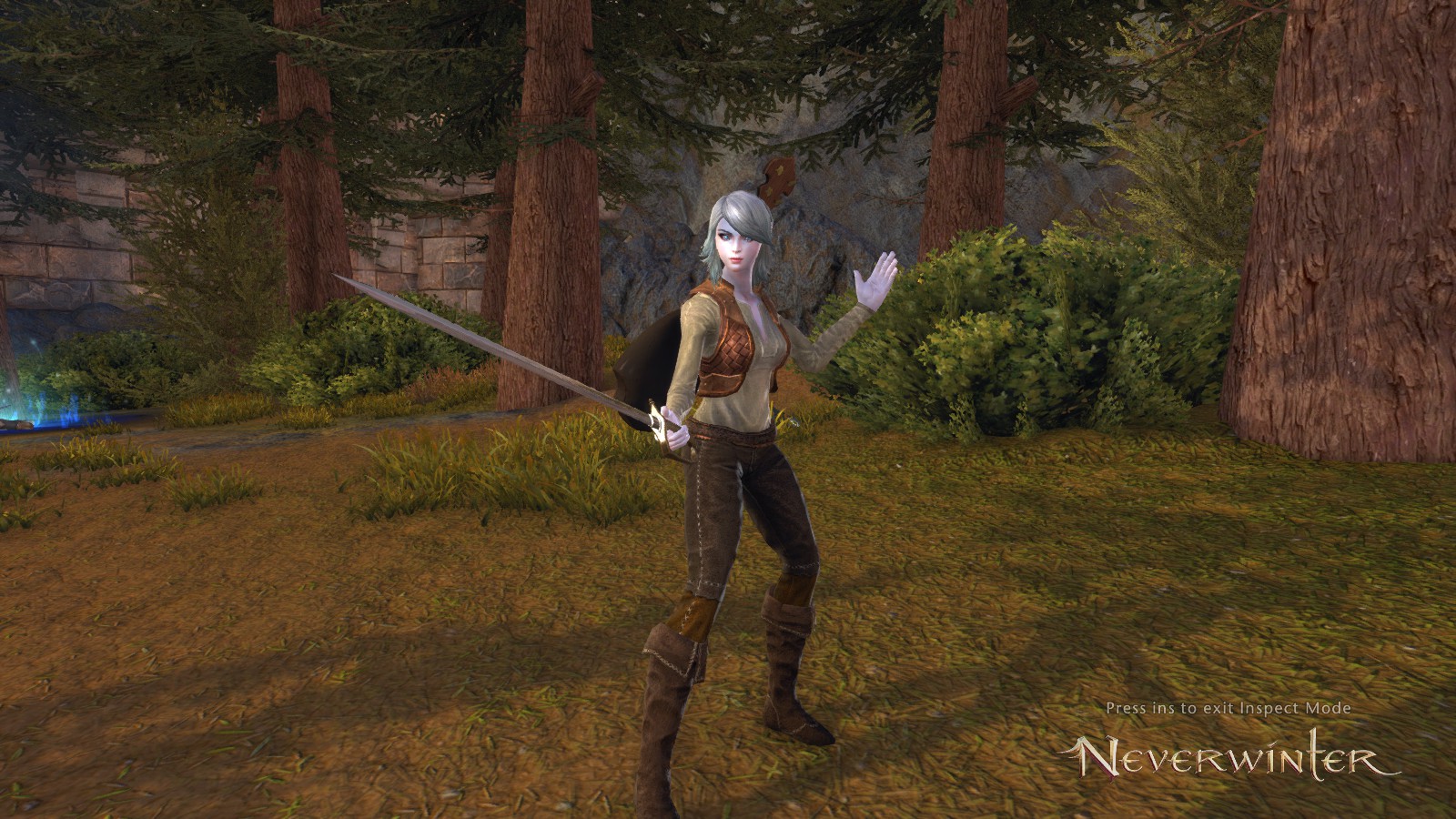 Switching over to playing songs mid-battle definitely takes some getting used to, but it’s certainly a unique mechanic, and as you level you can unlock quickslots that allow you to instantly trigger songs without doing the whole Guitar Hero schtick.

Another nice perk of the Bard is that out of combat you can enter into the music mode and use it for freestyle play. In essence it’s a full music system like that of Lord of the Rings Online (albeit with lute as the only available instrument). It’s a nice roleplay perk of the sort Neverwinter could really use more of.

In terms of its combat role, the Bard can specialize as either a DPS or a healer. Something that’s interesting, though, is that even if you go DPS, it looks like you’ll still have a lot of group buffs, so there’s always going to be a bit of a supportive element to the class. If you’re the sort of person who misses dedicated support classes… well, this probably won’t entirely satisfy you, but it does at least feel like a bit of a callback to that concept.

So all in all I’d take the Bard to be an unequivocal win. But when it comes to the leveling revamp, things are a bit more mixed.

The level cap has now been massively squished from 80 to 20, likely to more closely reflect the mechanics of Fifth Edition. This is accompanied by “vaulting” many of the leveling zones, and changing leveling over to a milestone system.

I think letting people get to endgame faster in a long-running MMORPG is generally a good thing, so the level squish makes sense. In an endgame-focused vertical progression game like Neverwinter, leveling is usually little more than a tutorial, so there’s no need to drag things out unnecessarily. Nor were Neverwinter’s leveling zones all that memorable, so shuffling a few off to the vault (from which they will theoretically one day return in some form) doesn’t seem like a major loss to me.

But I’m more conflicted about the new milestone system for leveling. 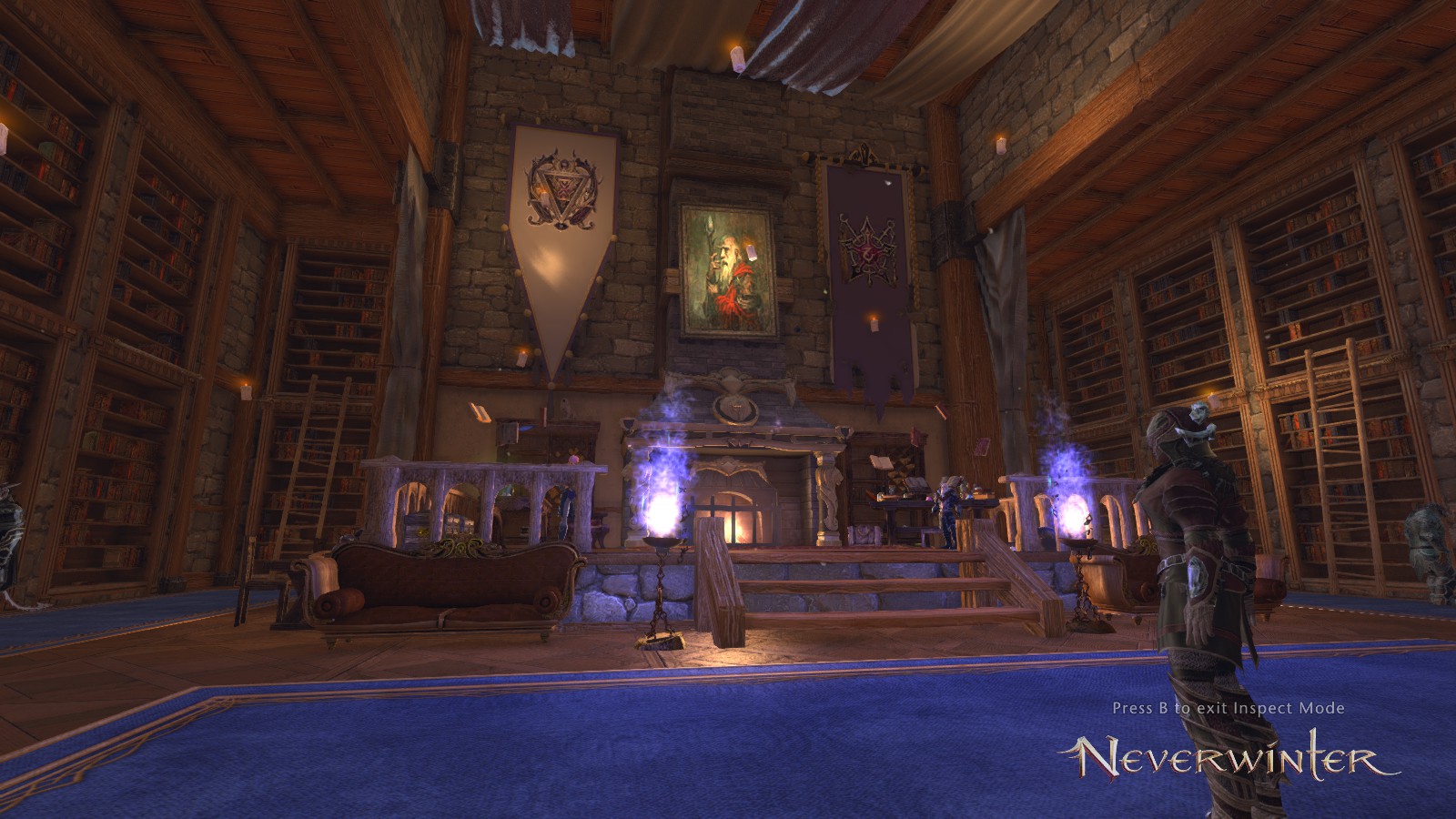 For those who aren’t tabletop players, just know that in actual D&D, “milestone” is a system for leveling that eliminates experience points entirely in favor of granting level-ups after significant events in the game’s storyline.

Personally, I prefer milestone leveling when I play tabletop. It eliminates all the fiddly math around calculating XP, it ensures all party members are always at an equal level, it prevents degenerate behavior like picking fights just for the XP, and it just feels logical. Feels better to level-up for some kind of significant in-character accomplishment — whether it’s combat or not — than for killing some anonymous Orc mid-quest.

I’ve never played a video game with milestone leveling before, though. I think it has a lot of potential; it can make non-combat playstyles like stealth and diplomacy a far more viable option, since you wouldn’t have to worry about losing out on kill XP.

But that’s only if you build the game with milestone leveling in mind, which Neverwinter didn’t. In this case, level-ups are only granted as rewards from specific quests, so it’s actually reducing options rather than increasing them.

Because XP has been removed from the game entirely, this completely eliminates the possibility of leveling through dungeons, PvP, mob-grinding, or anything else. Quests being the most efficient option is one thing, but now they’re the only option, full stop.

And it’s the same quests. There’s not even a choice of leveling paths. Though that at least could potentially change at some point. Maybe the vaulted zones could be brought back as alternate leveling paths. 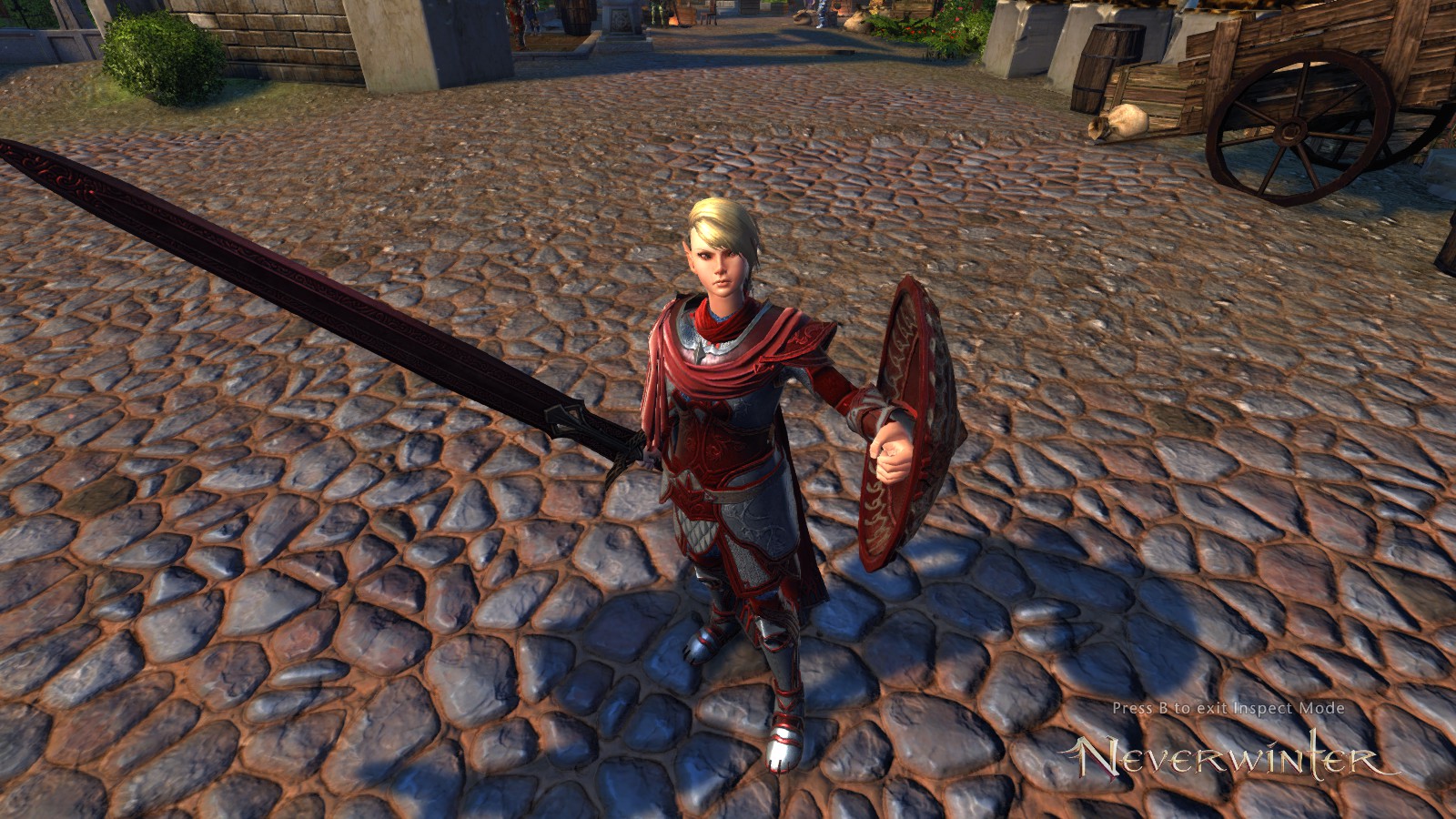 If you’re a new player, there’s really no problem here. You can just go through the quests, level-up, and have a fine time of it. But if you’re looking to level alts, the lack of options is going to get obnoxious quickly. I really like the idea of what they’re going for here, but I’m just not sure it’s the right fit for this game. Not without more work, anyway.

One other thing that’s awkward is how existing characters are affected by the leveling revamp. If you were already at level cap, it doesn’t seem like much changes, but if you were below the cap, you now get instantly promoted to 20. Sweet deal, right? They even give you a full set of catch-up gear off the bat.

(Sometimes I think this company was named Cryptic not because it’s a cool name but as an accurate descriptor of its game systems.)

Anyway, that’s not the weird part. The weird part is even after you’ve spent your currency to replace your catch-up gear with better catch-up gear, you still won’t have a high-enough gear score to tackle any endgame content. So you’ve got to go right back to the leveling quests. And since each zone has to be done in order, depending on what that character had done before the change-over, you might end up in a situation where you still have to do all the leveling content on your newly max-level character.

Since these characters were below the cap before the change — and there appears to be level-scaling that keeps doing low level content from being too boring — you could argue nothing’s really been lost here, and you’re right… but it just feels weird, you know? Why give us catch-up gear that doesn’t allow us to actually catch-up? 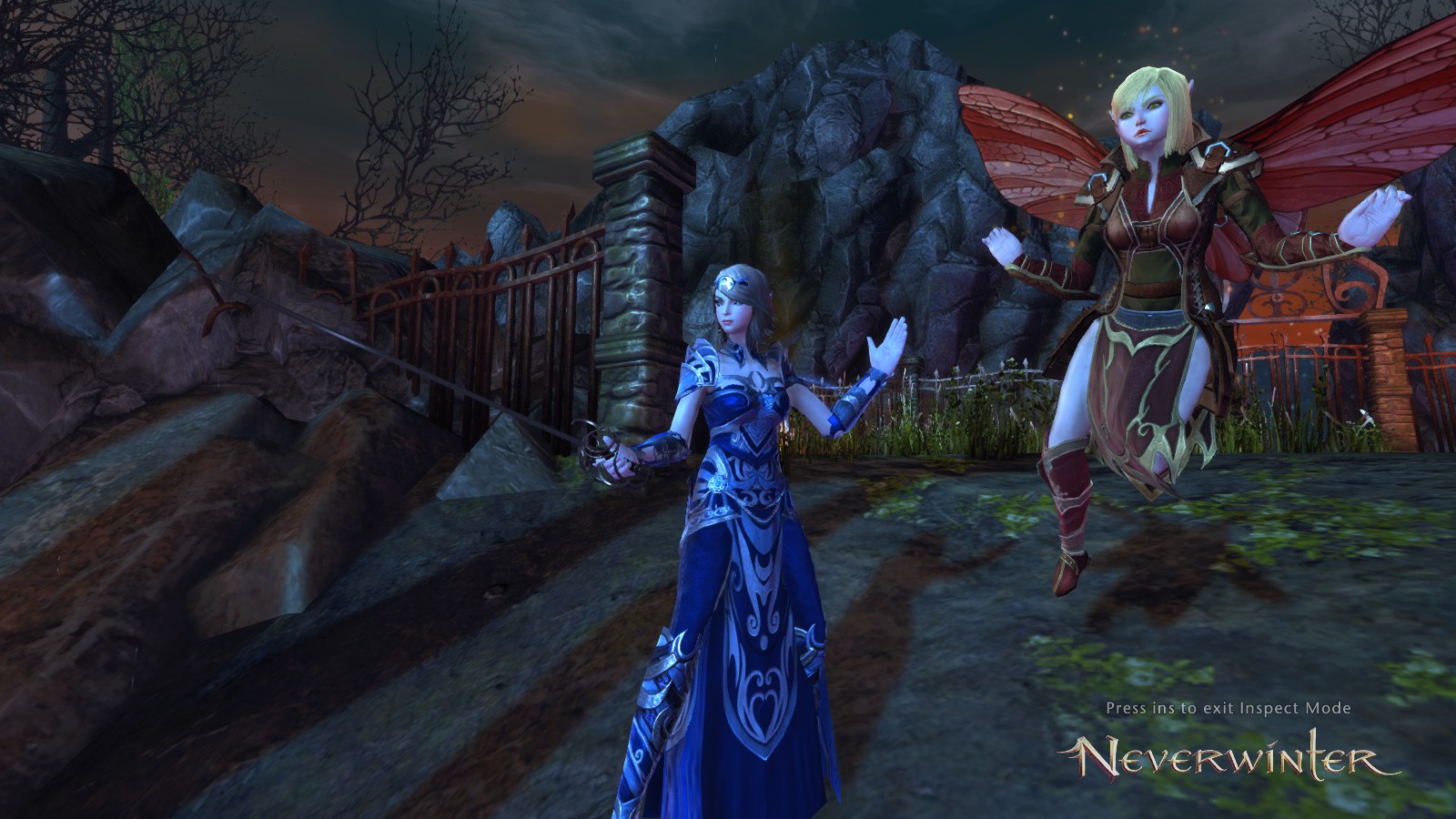 So all in all, Jewel of the North is pretty much the rollercoaster of inconsistent quality I’ve come to expect from Cryptic games. The bard is great. The leveling revamp is great if you’re a new player, but at best it’s a mixed bag for veterans, and in the long term it could make leveling alts much more of a chore.