We’re fast approaching the launch of Diablo II Resurrected, and Blizzard would really like everyone to focus on that instead of on its ballooning culture and legal problems. This afternoon, the studio posted a complete run-down of what gamers will need to prepare for the launch, including the game itself, which of course is not free; you’ll be buying the game all over again on your PC or console. The launch itself is September 23rd, but preloading for prepurchasers has already begun, and since this is a global rollout, you can refer to the handy world timezone map below to figure out when exactly you have to call off work to play. 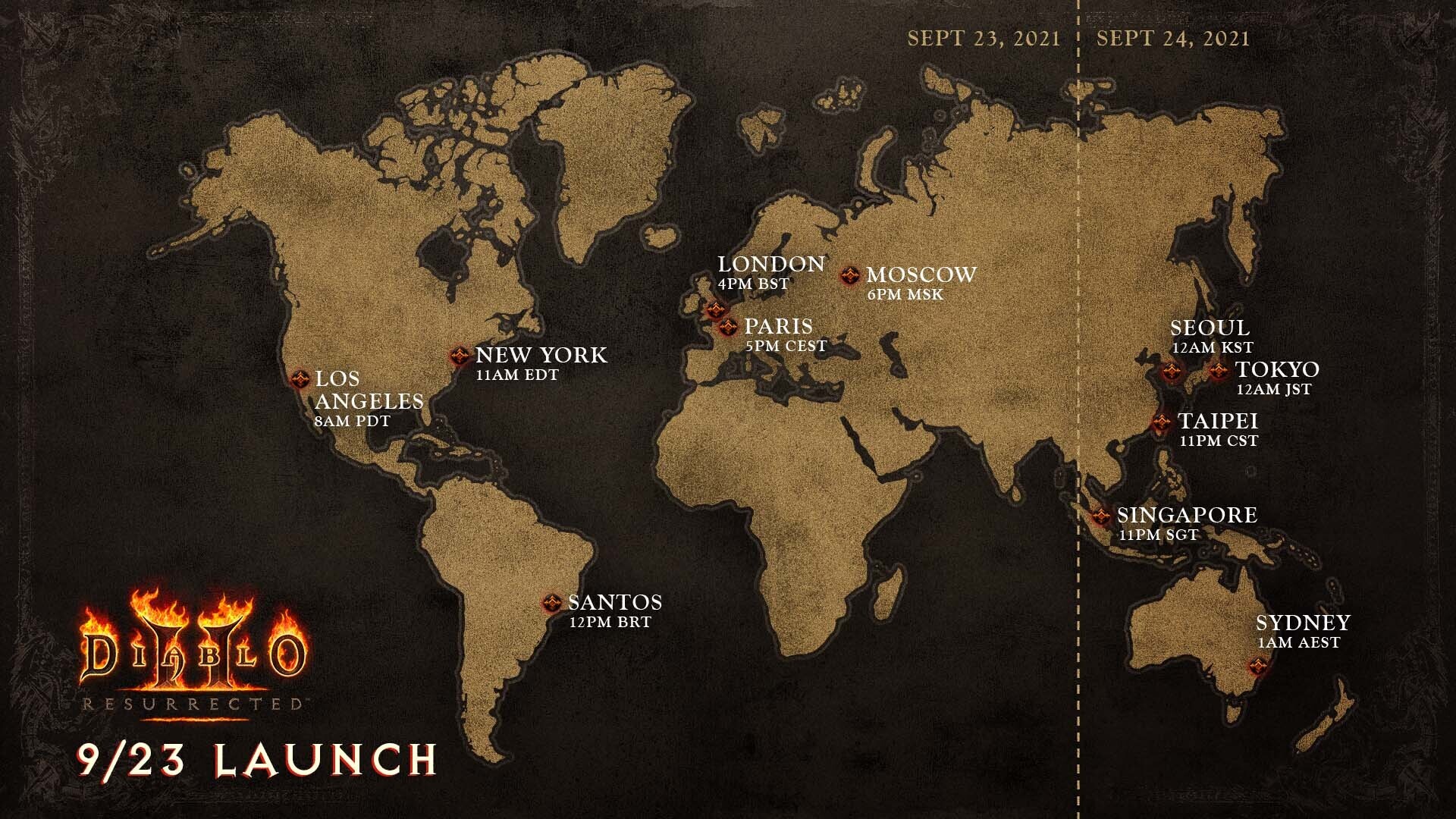 The latest FAQ notes that ladder rankings will be implemented post-launch and that there is indeed a way for you to import your ancient saves into this new remaster, at least for offline play, but of course the company wants to integrate you into its online ecosystem for any “modern online features.”

“Players will be able to load their local offline saves by copying the save files from the original Diablo II to Diablo II: Resurrected on PC. The underlying game engine is the same, so those local saves will work but they will need to be copied over manually. However, local save files (whether newly created or copied from Diablo II) will be different from online save files—there are profound differences between the modern Battle.net of today and the platform we launched with Diablo II all those years ago. To enjoy all of the modern online features, such as friend invites and greater security, players will need to create a new online character.”

Finally, there’s a new live-action trailer to celebrate the impending launch as well, featuring Simu Liu, who’s having one hell of a moment right now thanks to Shang-Chi and the Legend of the Ten Rings.

Source: Official site
Activision-Blizzard is considered a controversial company in the MMO and gaming space owing to a long string of scandals over the last few years, including the Blitzchung boycott, mass layoffs, labor disputes, and executive pay fiasco. Most recently, the company was sued by the state of California for fostering a work environment riddled with sexual harassment and discrimination, the disastrous corporate response to which has further compounded Blizzard’s ongoing pipeline issues and the widespread perception that its online games are in decline.
Advertisement

I expect it will do well. Diablo 2 is the game that got me seriously into online gaming. I was really looking forward to this. But then, shit happened and I refunded.

Surprisingly, I fully expect the sun will come up tomorrow just like today.

I’m not expecting that much. I was never really interested in repeatedly grinding the exact same content without variation whether it was how many ever years ago in D2 or advanced sextant/mapping strategies in modern POE.

However I never played the Lord of Destruction content, so that’s going to be a lot of fun to go through and play for the first time. If I can get a week out of the game or so then I’ll be pretty happy with it.

I’ve saved my money because I know for sure this ain’t going to go well, expectantly with every bad press gone at blizzard…. or should I say activision from here on out?

I gave it a chance largely because the development team behind it is being led by someone that did a stellar job and had actually become one of the co-ceos. That studio did a good job on the Tony hawk remasters so I’m willing to give it a chance.

Hopefully with the two that are at the helm now real change occurs. Bobby Kotick is still a problem, but for much different reasons and that is him being a blight because of his refusal to make games he can’t milk to death so Activision basically just churns out Call of Duty at this point and he is one of those CEOs that will have the company have record breaking sales and profit, take a huge bonus, and still lay people off/fire then.

Blizzard still exists and it is largely getting shaken up leadership wise now, but that can be a good thing overall

Damn…that it will work with old offline save files is wild. Totally get that they can’t do that for multiplayer, but I’m sure there are a few folks with decades-old saves that they’ll import and enjoy seeing with pretty graphics.

Didn’t they start with the original source code? If so I would find it wild if it didn’t support the original save game files as they would have to intentionally write code to not read those files. It would already be in the game.

They did in fact