Well, that didn’t take long: Just one week after initially teasing Fallen Earth Classic, Little Orbit has got the whole thing online. Downloads were available last night, and as of this morning, the game servers are actually live, though we’re still waiting on Steam reactivation as of this writing.

CEO Matt Scott, who spearheaded the buy-up the GamersFirst MMOs back in 2018, was also the one to close it down temporarily, following attempts to shore up its ancient server code and fix serious bugs and and block exploits. The original plan was a rebuild and reboot of the game, but by fall of 2019, Scott announced the studio was taking the existing game offline indefinitely over poor performance, too few players, too many bugs, and an unsustainable client, all while work on the new version pushed forward.

The version of the game live today isn’t the reboot, but it is a functioning version of the original MMO, the first time anyone’s gotten to play it in two years, though it might be missing some bells and whistles. 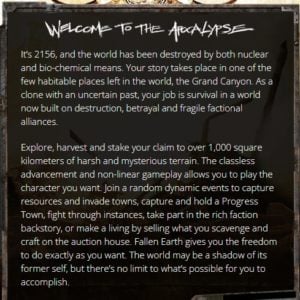 “I’m doing this in the spirit of fun and just getting the game back online,” Scott told players earlier this week. “There were decisions that had to be made in order to pull this off. As we go through the rest of my bullets, just know that in each case I had to balance getting this back online in a reasonable amount of time versus the laundry list of things I’m sure players would have wanted. We did our best. My hope is that players will enjoy the challenge of re-conquering the wastelands from scratch while they wait for the next version of the game.”

It’s also missing a cash shop, as this version of the game won’t be monetized, a welcome surprise indeed.

MOP’s own Justin Olivetti has been a champion for Fallen Earth over the years; if you’re curious why we love this little sandbox so very much, you can read up on his Game Archaeologist feature on the game and his sunset-era editorial on why it was a flawed gem of an MMO. “It was a weirdly wonderful game in spite of horrible coding, sub-optimal performance, and GamersFirst’s ham-handed free-to-play conversion,” he opined.

Source: Official site. Thanks to everyone who sent this in!
Advertisement