I’m not here to tell you that Monster Hunter Rise on PC is somehow a different game. It’s a port; you already can guess that from a gameplay standpoint there’s nothing new to find here if you’ve played the Nintendo Switch version, and if you were hoping that moving from the Switch to the PC would be some sort of quantum shift, I don’t know what to tell you.

Then again, porting the game over to the PC is still important, and the port itself is just as well done as Monster Hunter World in a lot of ways, which makes me happy that I have both PC and console editions. Yes, I’m that much of a fan of the series to do that – I did it with World, too. 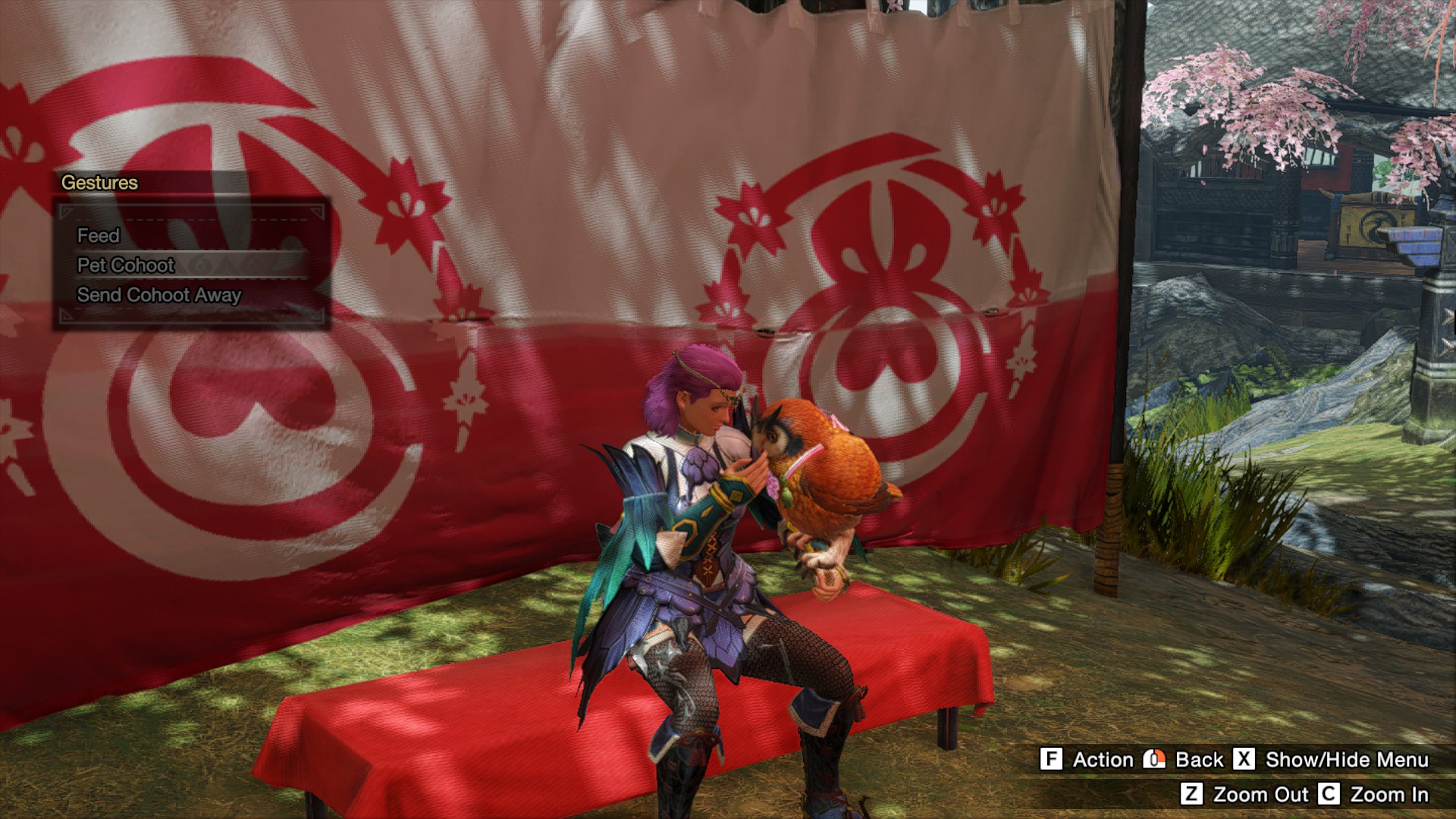 One of the first benefits of Rise on PC, of course, is the hardware grunt that can be brought to make the game look even better than it already did on the Switch. This game was already a great-looking game on Nintendo’s console, but the extra framerate and the higher definition textures make the game look even better. Granted, the graphical style isn’t on par with World in terms of fidelity, but that’s of no consequence for me. Rise has a different enough look without being too dissimilar to other games in the series, and I’ve played and enjoyed the series on a Wii and a Nintendo DS. I’m used to “bad” visuals.

And again, those textures do make a difference. Kezu has never looked so upsetting. Seeing a raw chicken-skinned combination of wyvern and lamprey in higher definition is just as wonderfully horrifying as that sounds. 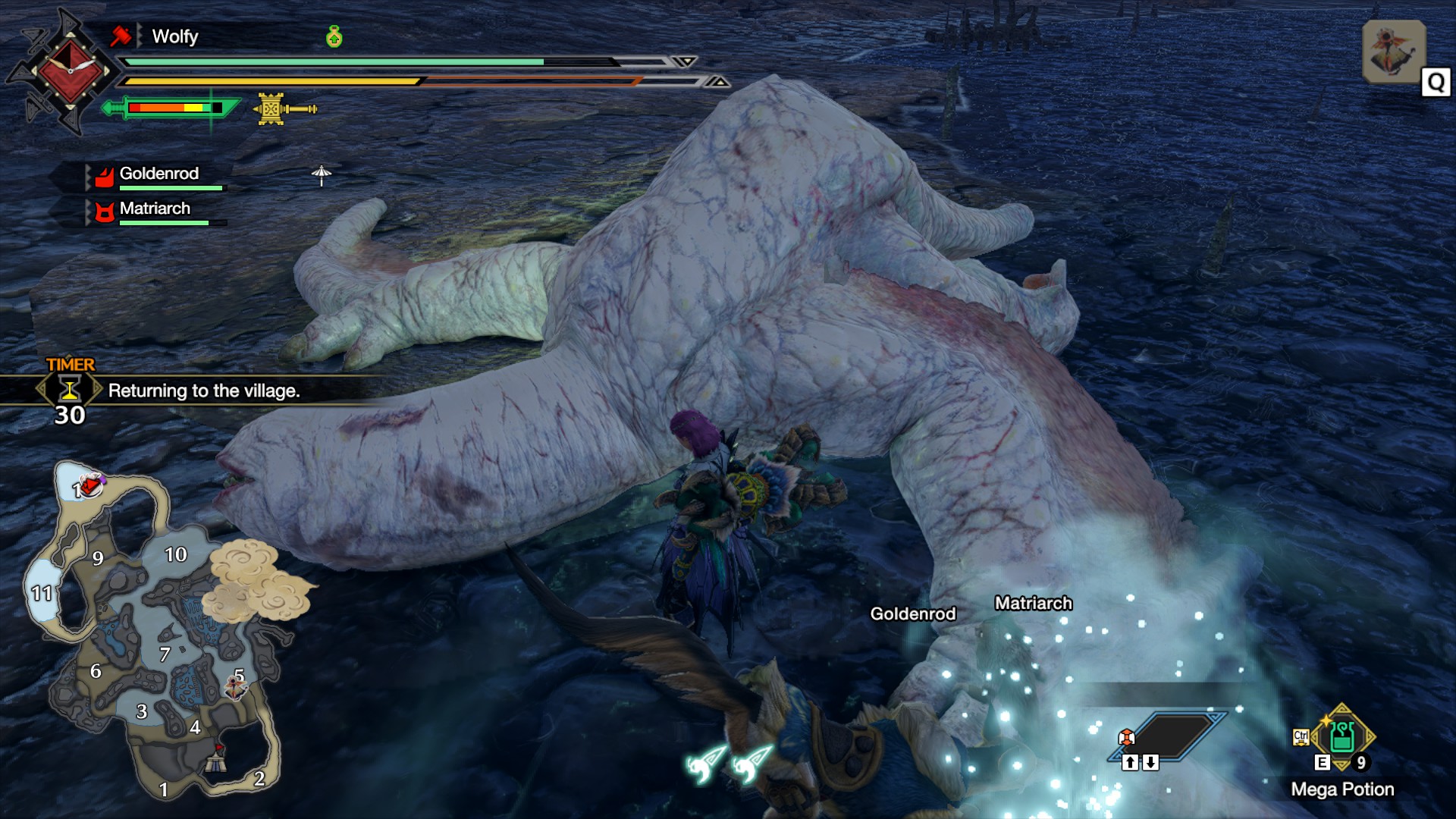 The improved framerate is a nice touch, too. Something about seeing this game run smoother just feels good, and that’s even with my middling machine. I suspect rigs that have more power benefit even greater in terms of both frames and in terms of texture resolution. The fact that Rise looked and ran the way it did on the Switch was something of a marvel and a testament to Capcom’s RE Engine, and seeing it run that much better on PC is a great thing.

Another selling point that the PC version of Rise touts is its improved keyboard controls. This boast I’m not so sure about, as I tried out using some bowguns with keyboard and mouse and found things to be a little awkward. Of course, remapping the controls is a thing one can do, and there’s little denying that using a mouse to aim a ranged weapon just feels right, but I also feel the gamepad did a perfectly excellent job with those weapons.

I admit that this might just be an old dog refusing to learn new tricks here, but the aiming of my bowguns with the right stick of my Xbox controller didn’t feel bad either. My target acquisition and reaction time to threats did suffer a little bit, but not so much that I really felt terribly hamstrung. Also, I’m pretty much in love with the hammer weapon anyway. 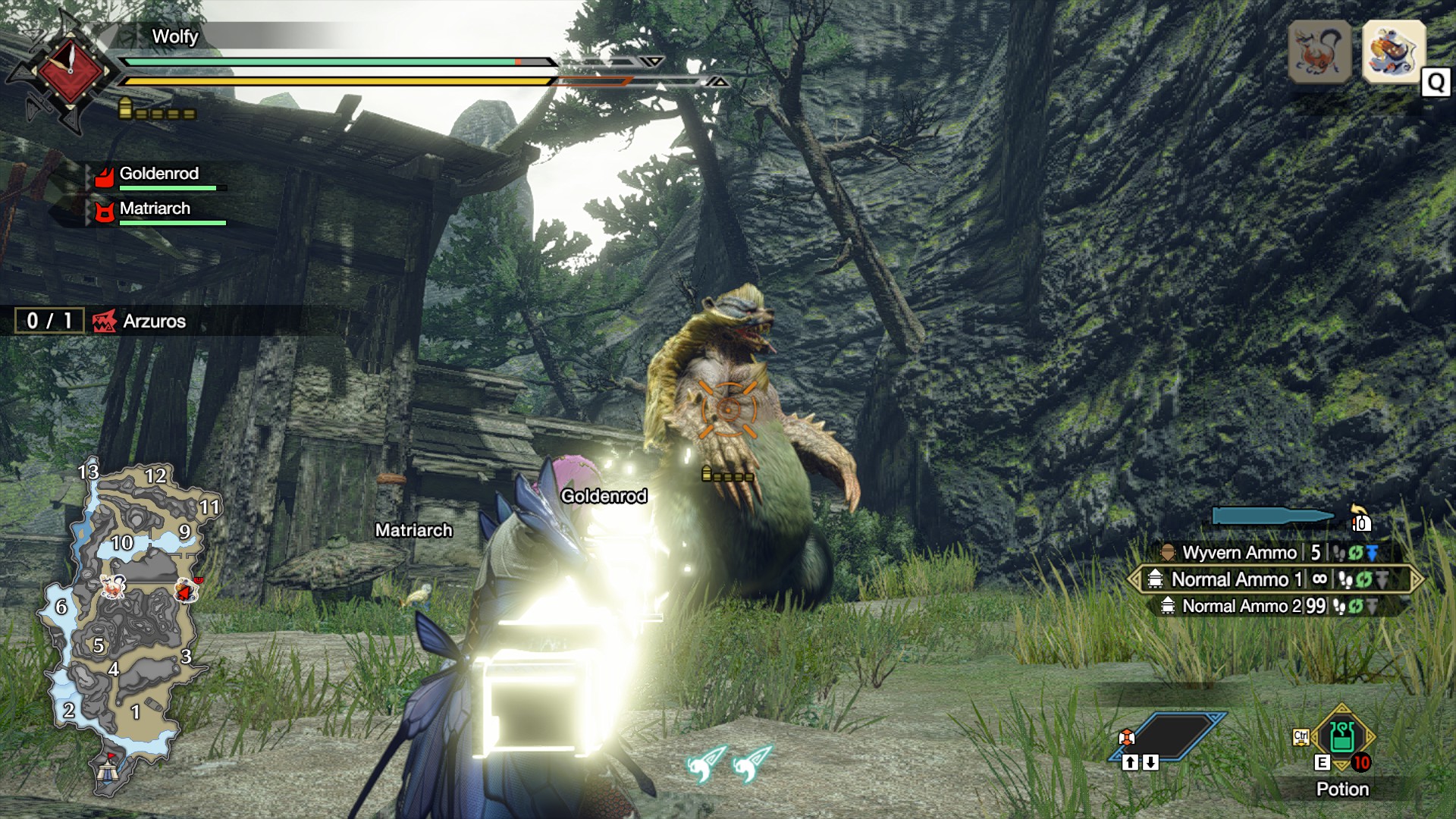 The last major piece of the puzzle – and the one most relevant to us and our readers – is the online gameplay. In World, this all felt extremely slapdash and poorly implemented, but Rise made it slightly less onerous to open up the game to others or find people to play with thanks to an NPC that can be talked to for all things online play. The integration of Steam friend names further streamlines things and makes it pretty simple to find people to play with or set up a session with friends.

Another pleasant surprise was that there were still people who were at Hunter Rank (HR) 1. This stunned me because it’s always been my experience that players of this series absolutely blitz through to the highest ranks and the hardest hunts at breakneck speed. It’s a common problem with most PvE MMORPGs that if you’re not at the bleeding edge, you’re a ghost, and the Monster Hunter series always seems to multiply that problem by a factor of 100. So consider me eager and delighted to have had other people my rank to play with on more than a few occasions.

I wouldn’t expect this to last, however; I’ve been burned too much to not expect that other shoe to drop and to be left in the dust yet again. I’d love to be proven wrong, but years with this series has said otherwise. 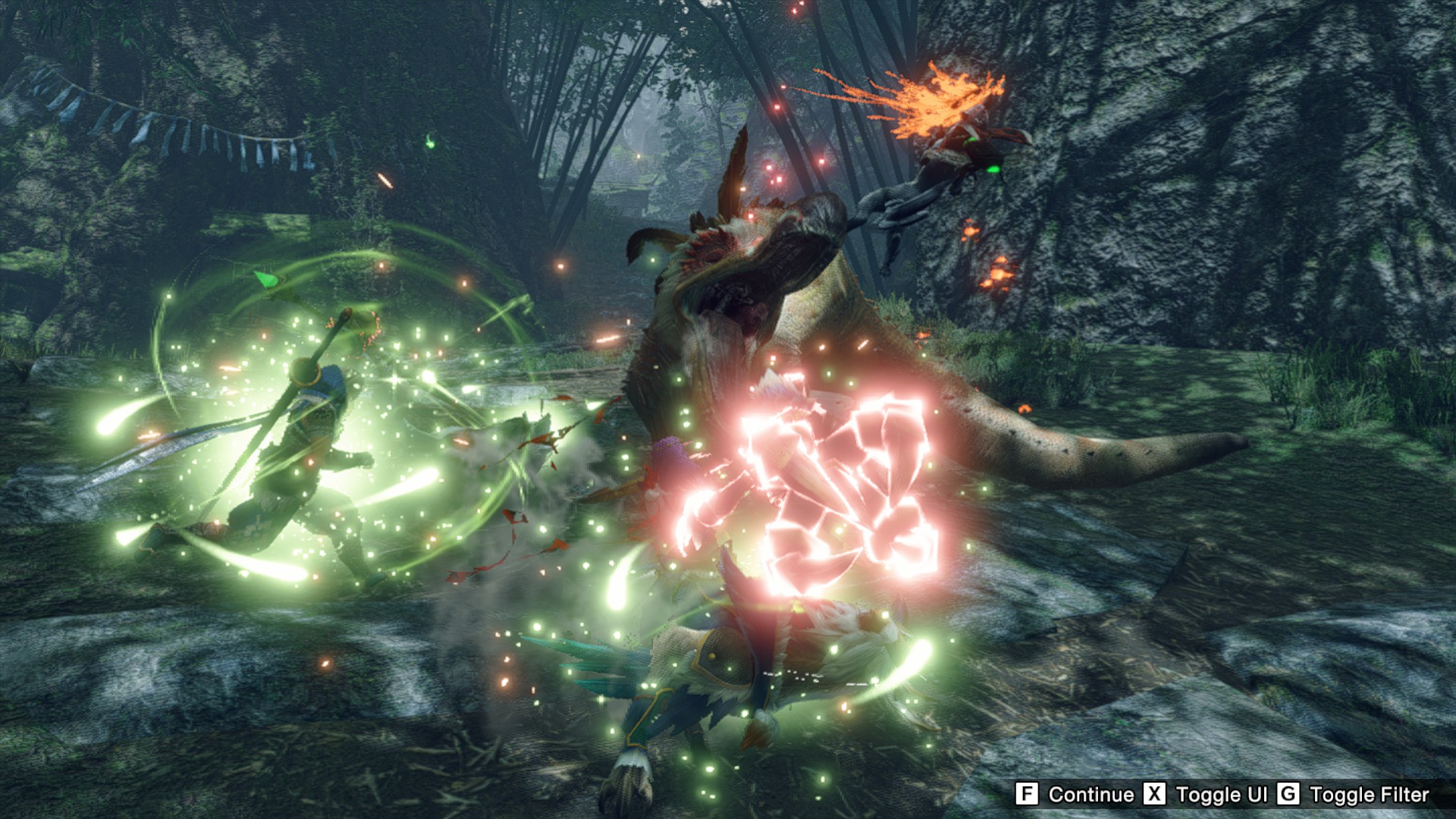 As for how online multiplayer ran from a performance standpoint, things went generally smoothly. I searched for an open lobby that had the criteria I had set, joined the lobby host for their posted multiplayer quests, and had a good time whaling away on a monster with others as we coated the critter in Rise’s signature hit sparks. There was a tiny bit of lag during one online session, but for the most part everything was running well.

Monster Hunter Rise on PC has it where it counts and doesn’t try to rock its boat too much, but then that is OK with me. The game still has large amounts of charm and style, the combat mechanics are still a great deal of fun, the Rampage is still boring as hell, and Barroth is still a pain in my ass. It would have been nice to see some cross-play between PC and Switch players, but hopping into this game all over again with a new community of players, a new weapon, and a new visual upgrade on the hunts is exactly the kind of experience I was looking forward to in the first place. 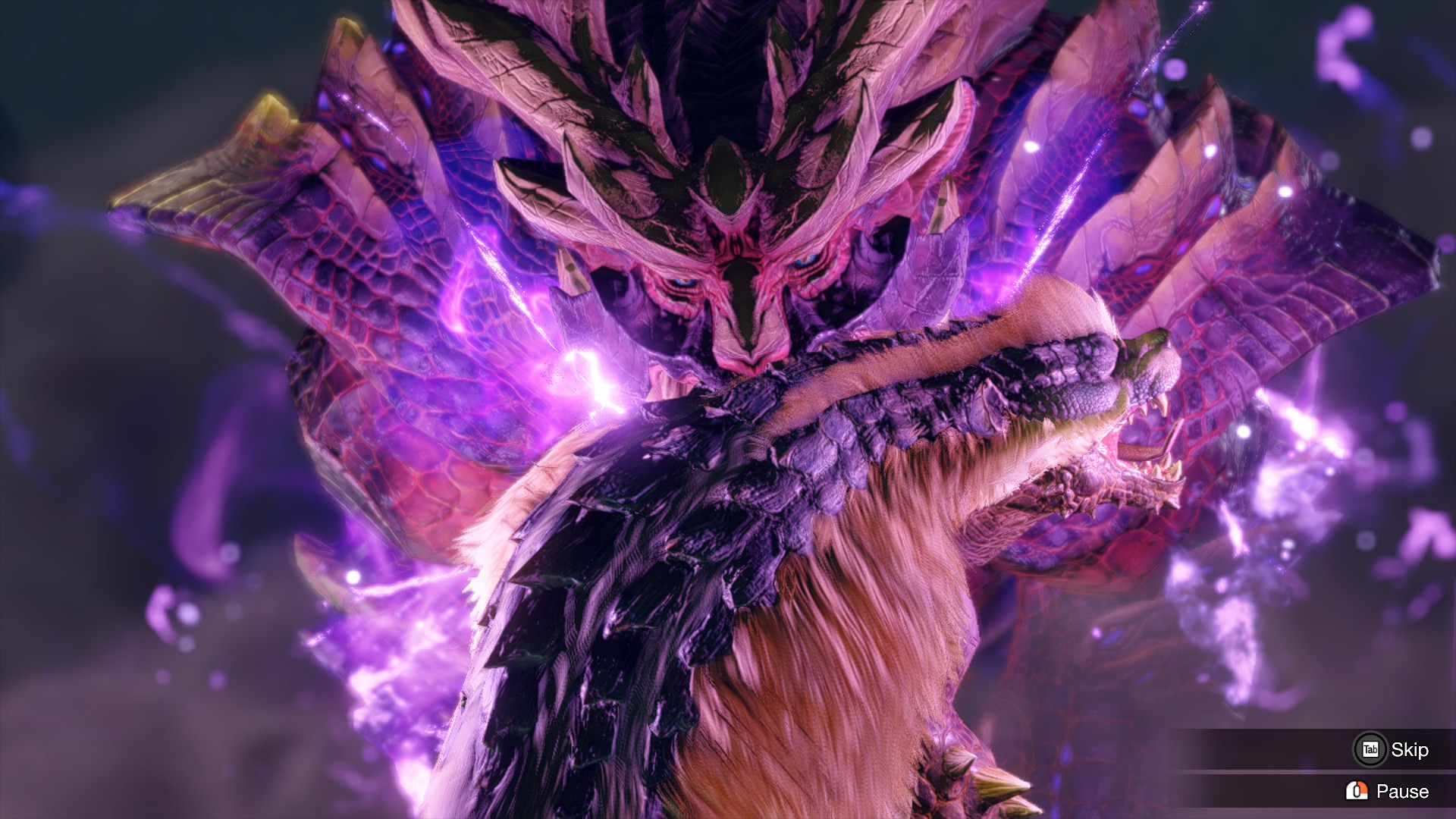 I admit that’s me just being a series fan boy, sure, but it’s hard not to get swept up, and being able to share in the hunting with PC players without too much fuss is engaging. There’s nothing like Monster Hunter Rise, and having it open up on PC is getting me addicted all over again.