After picking up an Oculus Quest 2 in the interest of expanding our coverage (and as a present to myself and others in my apartment, if I’m honest with myself), I’ve been opened up to a whole new universe of gaming experiences. Dungeon crawls have me actively entering dungeons and swordfighting in ways that are impossible to replicate through traditional video games. Gunplay feels new. Exploration feels intensely immersive. I get to freaking wave a lightsaber around, y’all.

So to say that I was curious to know how the sensations unique to VR gaming translate into my favorite genre would be a pretty big understatement. Enter Zenith, which launched just at about the right time for my overall VR journey, and while it’s still early days yet, I have to admit that VR adds a couple of interesting wrinkles to MMORPG gaming. 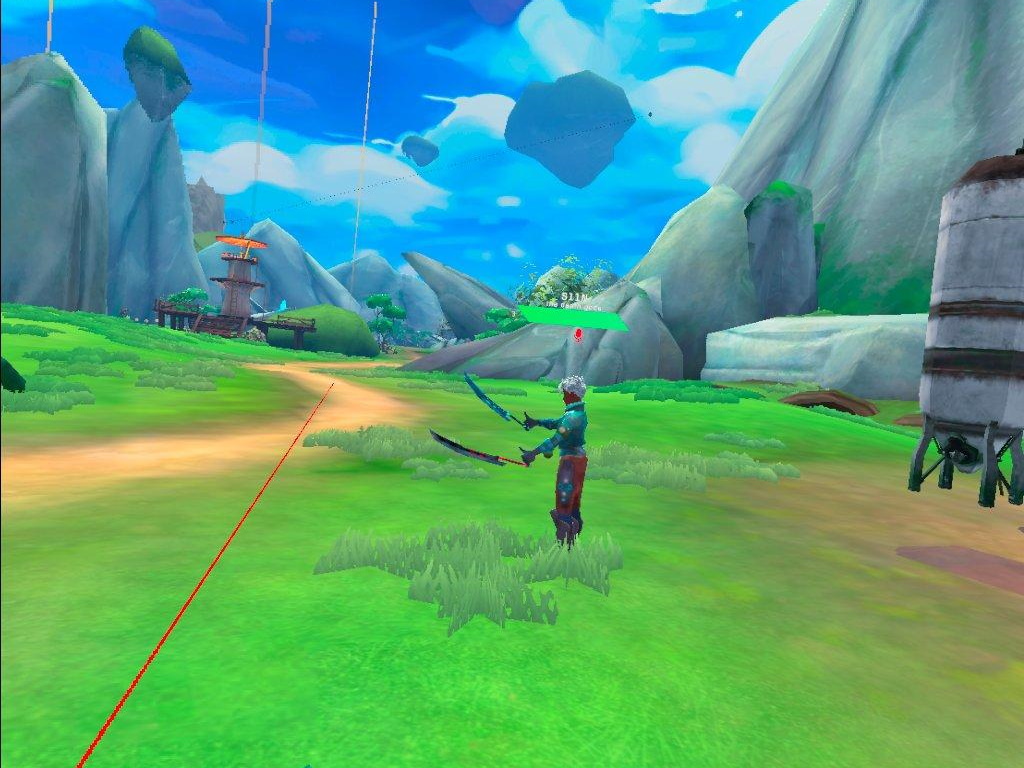 First off, of course, is the sense of being in a world. There’s very little doubt that VR makes you feel part of the world far more deeply than seeing an avatar in-game. The argument could be certainly made that any MMO in first-person view can be just as immersive (and the flat screenshots peppered within this article certainly seem to affirm that), but the sense of depth perception that’s inherent in VR makes entering an MMO world feel so much more engaging.

This is enhanced by the way Zenith controls. As an Essence Mage, my primary weapon is a pair of blaster gloves that require my hands and arms to properly aim, combined with spells that activate through simple hand gestures and holding down the grip button of one of my controllers. In order to grab loot, I literally have to reach out and grasp it with my digital hand (and then cram it into my chest because that’s how inventories work). Climbing a ladder requires me to actually grab and climb rung by rung. Gliding requires me holding my arms open a bit after leaping from a high spot. I can literally wave at other people. Or boop them on the nose. Or be fed an orange – all of these things I’ve done in-game.

The cynical side of me recognizes that I’m, effectively, waving my hands like a Wii-playing goofball, and while the sensation of doing things in real-life translating to game actions on a flat screen can feel kind of disconnected, doing it in VR feels more immediate and personal. For someone on the outside looking in I end up looking dorkier than usual because I’m Wii-flapping while having a TV brick strapped to my face, but the sense of doing these things in Zenith makes it all feel more engaging.

Also, I just don’t have a whole lot of shame to begin with. 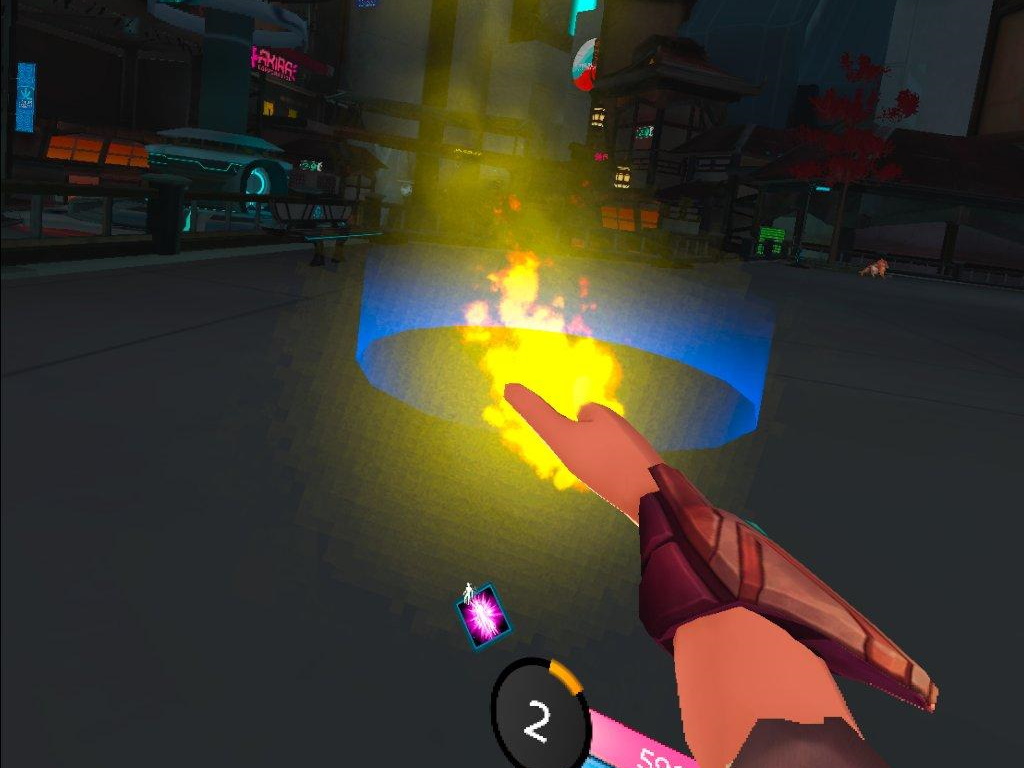 Of course, this kind of control isn’t without its own drawbacks. The gestures needed to call forth a spell, for example, aren’t totally perfect, as my movements were apparently not robust enough or my grip-gesture motion saw me unholster a weapon instead of ready a spell. Even so, casting spells and firing blasts at foes, especially with others, is a whole lot more engaging than I expected.

That brings me to another strong suit that Zenith brings to the table through the medium of VR: playing with others. The game’s world is actually pretty wide open, with monsters to join together to fight, public events popping up to take on together, and dungeons integrated in the open world that people can run into in randomly formed groups just like in the old days.

There is a pretty large asterisk with all of this social connection built into the game’s design and that’s the fact that voice chat is wide open by default. This can be shut off, of course, but that also kind of cuts off an aspect of socializing in Zenith that’s hard to disconnect from. I would have missed out on someone teaching others a gliding glitch, or someone verbally being astonished by sights they saw in the game’s first city, or people joking around with one another or congratulating on clearing an event or a dungeon boss. Then again, people have been pretty foul-mouthed of course; nothing truly vile in my experiences thus far, but definitely potty-mouthed (much to the annoyance of one mother monitoring her son’s play, by the sound of it).

Normally cutting off a hot mic or shutting off general chat in other MMO and multiplayer games is just good practice in general, but in Zenith it feels anathema a little bit. One’s mileage and tolerances may vary, of course, and it’s entirely possible the next shoe will drop sooner rather than later in my own personal experiences, but my experiences have been tolerable, we’ll say. Certainly not as bad as I had feared. 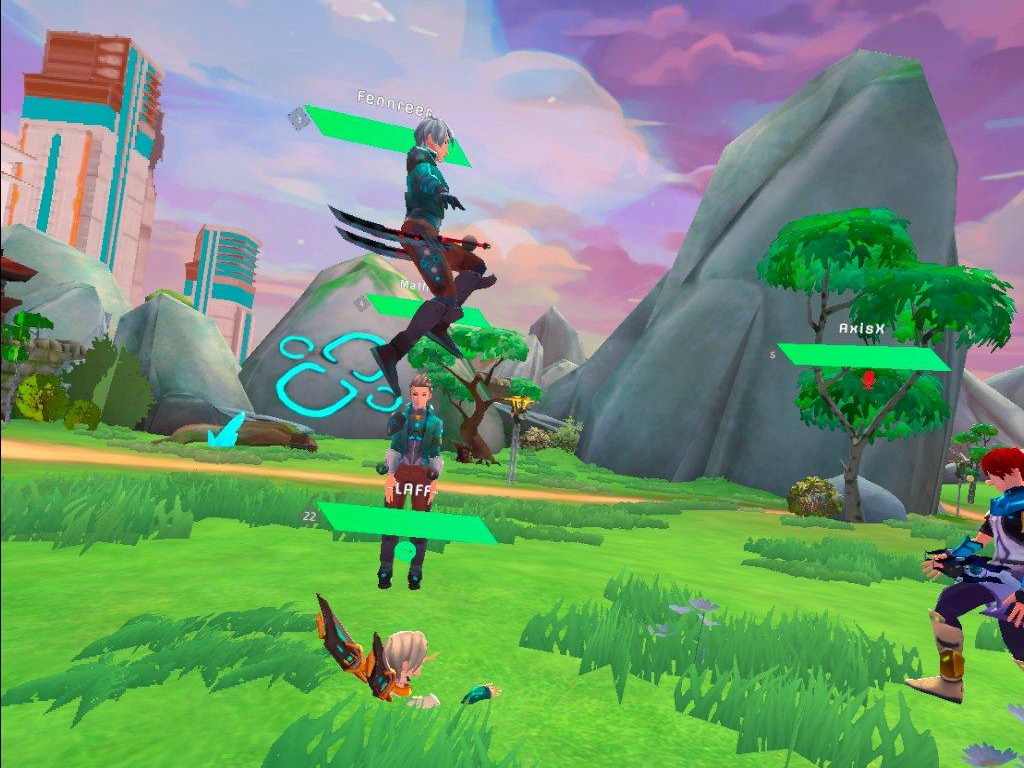 As for Zenith’s base gameplay, there’s nothing new under the sun here as far as MMOs go. It’s your bog standard themepark experience, moving you around different locations on the map and picking up quests along the way. That said, there is a little bit of reward for going off of the beaten path, with random crafting materials to gather, treasure chests to find, random questgivers peppered here and there, and the aforementioned open dungeons and events. Not much here is remarkable in that regard.

We also have to talk about the graphical style. This game has very simple visuals, so without the benefit of VR gameplay and immersion, Zenith can look not so great to the grizzled genre vet. And there are some stunning VR games out there in terms of visuals, so the fact that Zenith looks a bit too simple and too flat is an understandable complaint. I am finding myself getting used to it all, though. Avatar animations could use some work, though; everyone runs around like they have spines made of iron.

Ultimately, I’m going to need some more time in Zenith before I feel I can form some more informed first impressions, so that leads us to this week’s polls. The first one is about gameplay focus.

What should be a primary focus for my time in Zenith?

The second one is a (hopefully) interesting one related to socializing in Zenith. As I mentioned earlier, I’m undecided on whether closing the mic and muting voice chat will affect the social connection of this game, so that makes for ample poll question territory if you ask me.

Should voice chat be off or on? 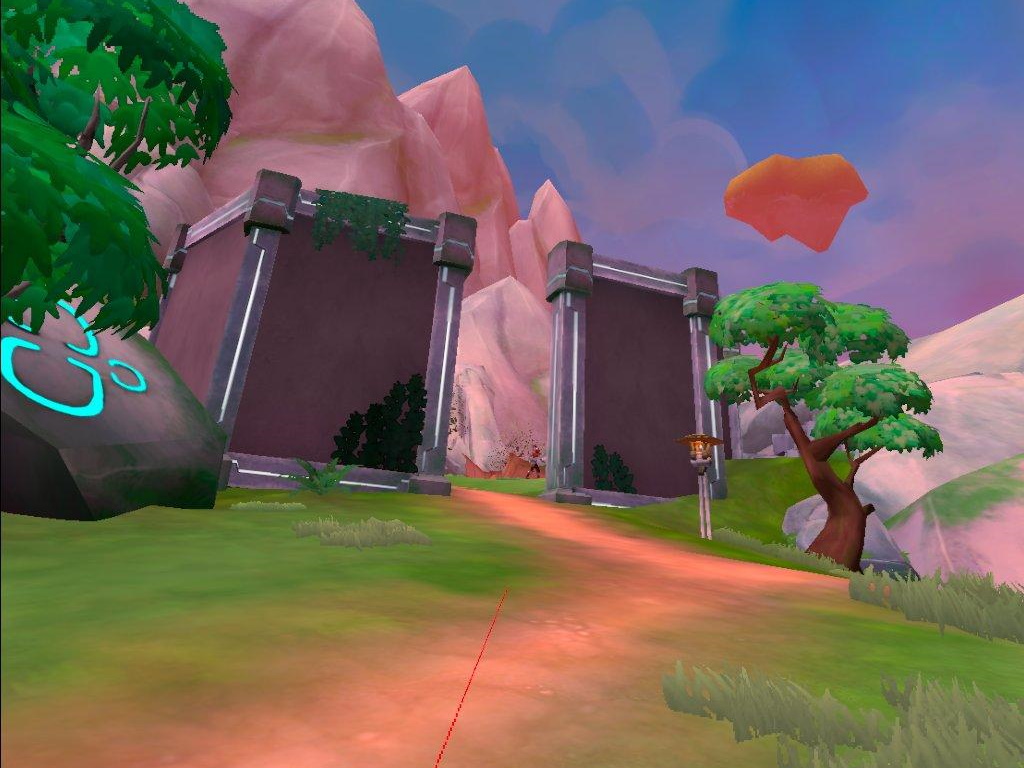 Polling will naturally close at 1:00 p.m. EST this coming Friday, February 11th. In the meanwhile, I might just try and snap up another level or two until the poll results come in. Or I’ll delve into more VR gaming in general.